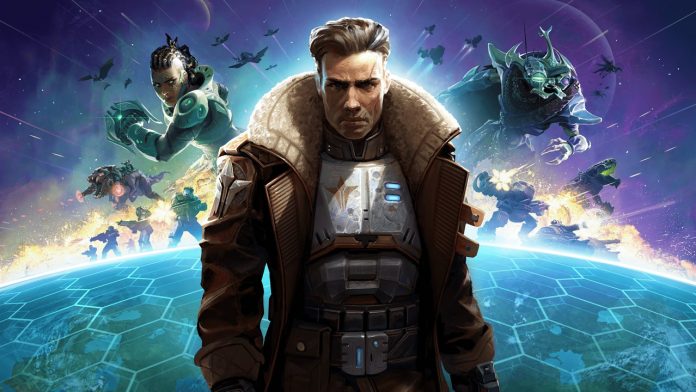 Age of Wonders: Planetfall has been consistently one of our most favorite games of the past year. We’ve played close to 200 hours of the main game and expansions, and we don’t plan on stopping anytime soon. If you haven’t read our review of Age of Wonders yet, here’s the review of the base game, the Revelations expansion, and the latest Invasions expansion.

Traditionally strategy games have been at home on the PC, where the keyboard and mouse offered a degree of flexibility that allowed for swift execution of commands as well as fine control over units and buildings. This meant that the consoles were left alone, and starved from a great genre. Fortunately, the folks at Triumph Studios have managed to make the control scheme for Age of Wonders: Planetfall easy for even new players, and does a fantastic job on the technical fronts as well to make this game feel right at home on consoles.

Age of Wonders: Planetfall is an enormous game with so many moving parts that we are honestly surprised the game runs as good as it does. On the base PS4, it runs at 1080p with a locked 30 frames per second. On the PS4 Pro, you can toggle between performance mode and resolution mode. Performance mode makes the game run faster: 1080p with a boost in frame rate and even when things get heavy, you can expect a constant 30 FPS. Resolution Mode on the other hand does exactly what you expect it to do. By favoring a higher resolution, the interface is rendered at 4k, with 3D world rendered in 1440p, the game looks crisp and sharp.

For the rest of the review, we will refer to the base PS4 in terms of performance. The game starts off fairly well, with a stable 30 frames. Starting units don’t have flashy attacks and your won’t run into large enemy armies as well. Once things start getting crowded however, and you have multiple armies, cities and AI civs duking it out on the map, things start getting a bit messy. For starters turn-times start getting longer, but this is expected from a 4X game, however there are noticeable jitters when enemy turns get executed near the end game.

Battles can also cause frames to drop, with the abundance of lasers, special moves and ambient effects. Larger stacks of armies add more trouble into the mix. However, we never found the FPS to be unplayable territory and it tends to quickly recover. The occasional low framerate is also not a big issue, partly because of the nature of turn-based strategy games. Since you don’t have to execute commands in real-time, and things only start chugging once you are done giving orders and your units start executing them, FPS doesn’t hinder gameplay at all.

Overall, I’m quite impressed with how Triumph Studios has managed to make Age of Wonders look and feel on the now 7 year old hardware. Although Planetfall is not something filled with eye candy and next gen cutting edge graphics, it is undoubtedly a pretty good looking game. And for console players to enjoy it without sacrificing too much of the visuals that PC offers, is an impressive feat.

And now, of course, the most important part of any game – the controls. As we have already said, the control scheme is well adapted on consoles and it’s a breeze to interact with the game. Every part of managing your civ – from economy to army can be accessed with a touch of a button and then navigating a radial menu. You can cycle between cities with the LT, while events can be cycled through with the RT button.

Selecting units and other objects on the overworld map is just as easy, as you can navigate the hex grids with the analogs stick. The selector which acts as the replacement for the traditional cursor glides around the map with ease and snaps to the nearest grid so that you don’t have to fight your analog sticks to select something.

In the battle mode, the game controls similar to how tactical games work on the console. You can use the shoulder buttons to quickly select a nearby target, the D-pad can be used to select your abilities and the triggers can be used to select your available units. And we must say, even though we have played countless tactical turn-based RPGs, and strategy games on the PC, the controller is an excellent and viable alternative to the keyboard and mouse when it comes to these types of games. Being able to sit back on your couch and control every aspect of the game with your controller feels certainly more relaxing than the traditional setup we am used to.

There are many people who would feel these kinds of games are better off on the PC, but after playing through Civ 6 and now Age of Wonders: Planetfall, we would heavily disagree. Triumph has triumphed(heh) in making the console port play and look almost as well as the PC counterparts. We think it’s a great thing that 4X games are making the jump to consoles as this will allow a huge community of gamers to experience this great genre. Excellent port of an excellent game.

The operation technology of AU online casinos: what gamers should know

Games Previews TechArx Gaming Staff - November 23, 2020 0
The democracy games are a series of complex layered political simulators, by Positech Games, and puts you in the reins of a...

Game Reviews 0
Call of Duty: Black Ops Cold War is the latest installment in the long-running Call of Duty games, and the fifth entry...

Editorial TechARX Kolkata team - November 20, 2020 0
The trends in the iGaming industry, although not too drastically, change from year to year. The 2020 has become special for the...