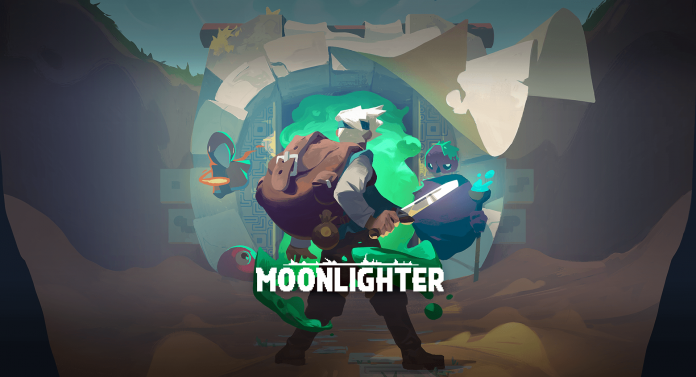 Rogue-likes/lites have become common these days. It’s hard for a game to make a distinct name for itself but Developers Digital Sun has managed to do so with their game Moonlighter which puts a twist in the familiar formula to deliver a fresh new experience. Now it’s 2020 and Moonlighter’s expansion – Between Dimensions is finally available on consoles. But before we take a dive into the new content, let go over what made Moonlighter so great.

Set in the town of Rynoka, a small commercial town that is host to a mysterious dungeon fool of loot, Moonlighter puts you in the shoes of Will. A young boy who dreams of becoming a hero but inherits the family shop called Moonlighter, he has to choose between a life of adventure or commerce, or does he? Instead of choosing to become a hero or a successful shop owner, our dear Will decides to kill two birds with one stone.

Throughout his dungeon diving experience, Will runs into various artifacts that he can collect and later on sell in his shop for money. This is what I mean about taking out two birds with a stone. By linking together both sides of the game, Digital Sun has created a refreshing and addictive gameplay loop.

As you go deeper into the dungeons, you have the chance of obtaining higher quality artifacts and materials but if you die, everything that you hold inside your bag will be lost. Fortunately, unlike other games in the genre, Moonlighter allows you to teleport out of dungeons any time for a price. This adds a layer of tactical decisions to every run you make, as you risk earning a bit less than what you might have for completing an entire dungeon but dying would have made you lose everything you had. Do you have confidence in your skills to not die? Or would you rather curb your greed?

Once you escape from the dungeon, you can fall asleep if it’s still night to advance to the next day. Or you can open your shop and sell your wares. This part of the game isn’t some tacked on gimmick, it’s a light but fully featured shop simulation where you must correctly price your goods and maintain demand and supply of your goods to earn a profit. Sell too much of a valuable item and it might not be valuable any more. Once you start earning money, you can invest it into other shops. This way you get access to a potions shop, an armor and more, including a bank where you can invest your money.

That’s not all, you can upgrade your shop to add more facilities, increase display space, hire an assistant(and pay her wages) as well as customize the look of your shop. Soon enough your humble shop becomes a bustling shop of commerce, and with your investment, Rynoka can regain back her former glory.

Something very important in these roguelike games is an in-game economy. Money starts becoming irrelevant when you start accumulating hoards of gold with nothing to spend it on, but Moonlighter does an excellent job of providing a constant money sink by introducing an economy that feeds into itself. There is no XP bar in Moonlighter, so the only way you prepare Will for more difficult dungeons is by equipping him with better weapons, armor, and potions. In order to do that, you need money and materials. But in order to make this money you need to sell those materials, so what do you do? Do you sell off valuable materials for earning a quick buck or slowly grind your way in? This starts of a loop of delving into dungeons, getting materials, deciding which materials to keep and which to sell, and then finally deciding where to invest your money.

None of the two main gameplay elements – the dungeon diving and shopkeeping ever become irrelevant because of this, as one feeds into the another. I also never felt like I was too overpowered, or bored, due to the constant goals the game set for me, aside from the mildly interesting story.

Now all of this wouldn’t be nearly as fun if the dungeons weren’t cleverly crafted, the enemies intelligently designed and the combat meaty and impactful. Will cannot spam his attacks, and will be left vulnerable if you try to button smash your way through. The enemies also pack quite a punch, but are never unfair. All enemies have well telegraphed attack patterns that you can study and adapt, striking into them at the correct moments. Each dungeon room also seldom feels like a puzzle, with chasms, enemies that can trap you, turret like enemies that can block you off, as well as other environmental hazards.

Inventory management is also a very important aspect of Moonlighter because Will’s backpack has limited space. You will have to decide which items are worth taking, and which ones to leave behind. To aid you in making the correct decisions, you have access to a handy notebook that keeps a track of the pricing of each item, so that you can make the right choice.

Judging a book by it’s cover

Right from the start, Moonlighter gives off SNES and NES vibes, with it’s the colorful and vibrant pixel art style. From the music to the sprites, everything about the game screams the good old days.

Despite having a randomized dungeon creation system, the game managed to keep me surprised. Even though I ran into the same type of room every once in a while, it managed to keep me on my toes and stop the pacing from getting monotonous.

Between Dimensions takes place after the main game ends, and features a ton of new content which sees our hero Will take up the dual mantle of shopkeeper and dungeon again as he dives into a new adventure.

After an interdimensional portal opens up in the outskirts of Rynoka, Will finds himself facing brand new challenges and enemies.

There’s not a lot of newly added mechanics, instead, the expansion improves upon the already solid systems of the base game. The new dungeon has nine floors, unlike the three floors of the base game dungeons. These floors have familiar as well as new enemies, bosses, and the most challenging end boss in the game. New weapons as well as armor and an NPC have been added to make this challenging dungeon a more manageable affair.

Overall an excellent addition to the main game, that gives the fans just what they wanted – More Moonlighter.