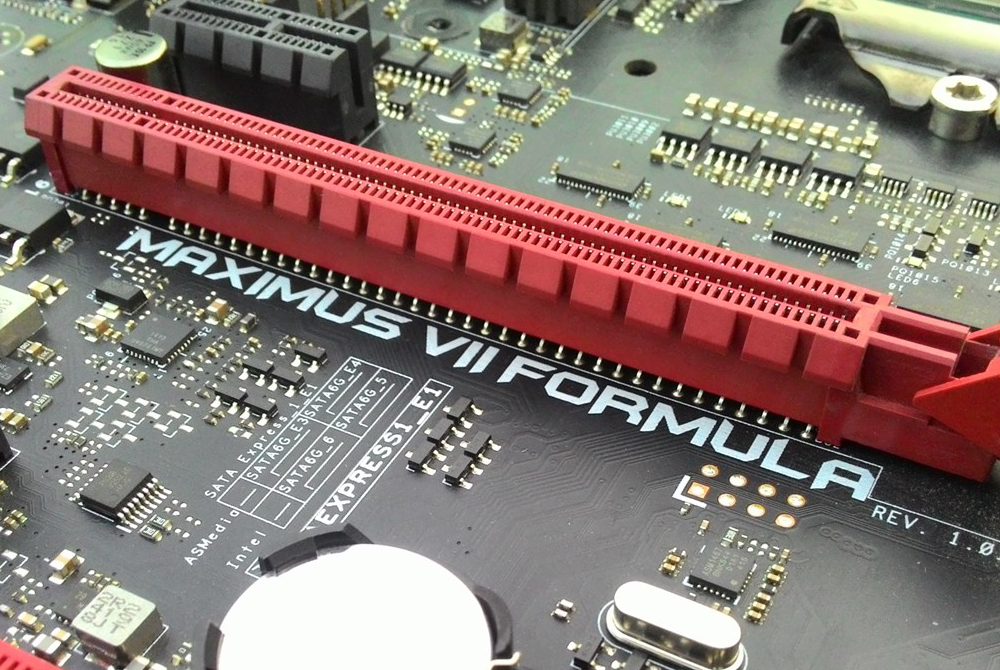 Today we will be covering the Maximus VII Formula : the current ROG flagship for now since Asus has not yet decided to release an Extreme for the Z97 chipset.

We already covered the Maximus VII Ranger  and the Impact lets take a look at the what the current flagship has in store for us. 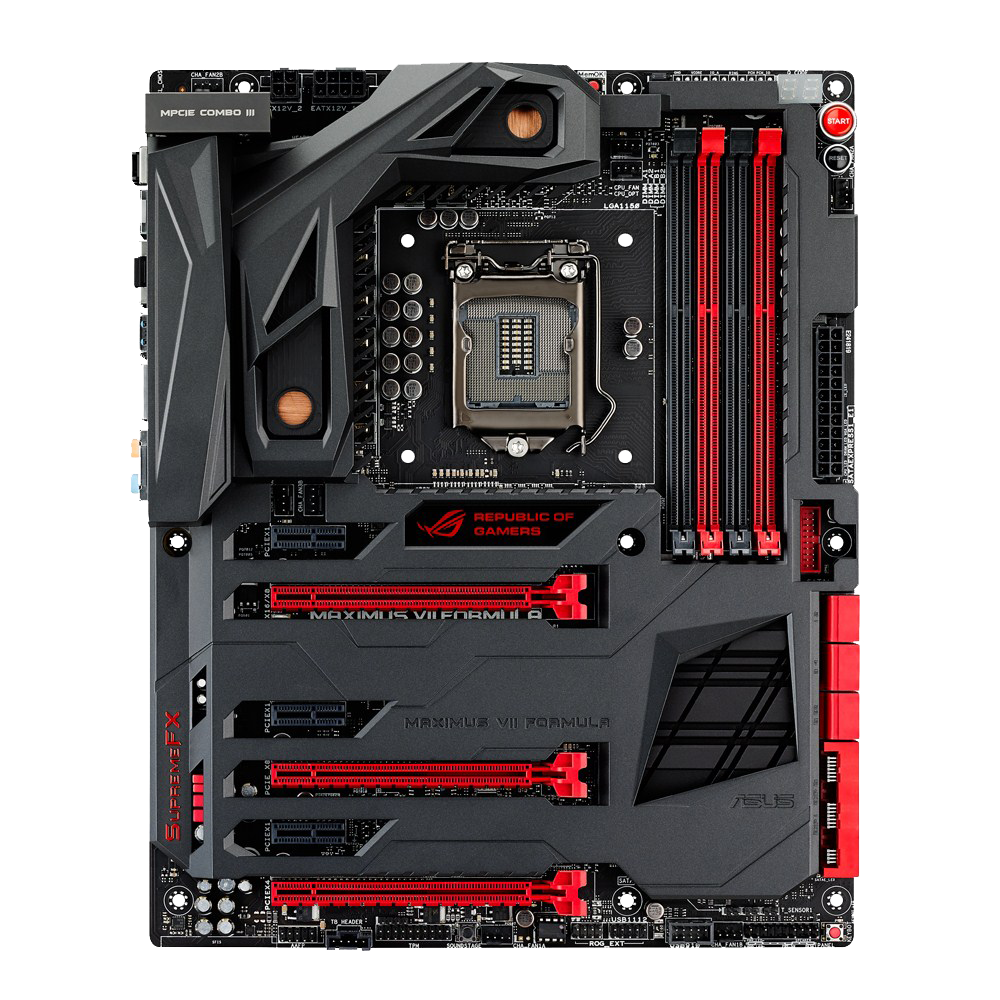 Before going into the benchmarks lets take a tour of the Maximus VII Formula,We have given a “naked” picture of the board to accustom our readers with the board components which in case of the Formula are covered with a thermal armor.

Now let’s start a visual tour of  the board.

The top left hand corner of the motherboard has a 4-pin fan header, and 8-pin+4-pin CPU power connectors. Starting from the middle we have the Memok! button which helps in the booting up the system with any type of DDR3 memory.Besides that we have the ever helpful Q Code LED which displays a code in case of a system failure;between the memok! button and QCode led we have the voltage measure points useful on testing the board and in case of sub zero overclocking.

A closer look at the probe points are given below

Just under the LED panel we see the Big Start and reset buttons which has become a trademark of ROG series,. The main attraction of the left side are however the four Ram slots supporting upto 32GB of Memory,memory speeds are supported upto 3300 Mhz(OC).ASUS’ T-Topology design is used here meaning that the trace paths to the CPU and therefore memory controller are equal. Beside the ram slots we see two power phases dedicated to the memory subsytem only.To round of this section we see the main ATX 24Pin power connector and the front USB 3.0 connectors. The power connectors hides the device leds which offers a quick reference guide in case the system fails to boot.

Coming further down the we see the Nuvoton I/O controller chip along the TPU chip. 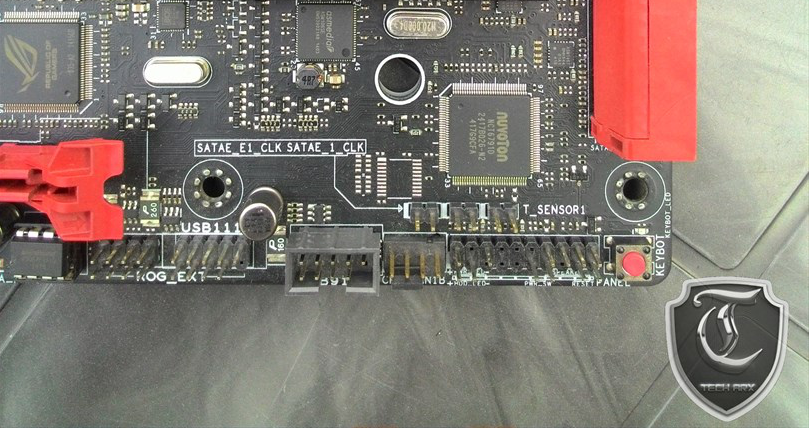 The section also consists of the onboard KeyBot button,front panel connectors,Front USB2.0 connectors and ROG extender connectors(for hooking up a ROG Front Base) along with a fan header.

Coming to the lower left side we can find a fan header,a TPM(Trusted Platform Module) header,A TB header(thunderbolt),and lastly the AAFP connector commonly known as the Front Panel Audio Connector(don’t ask me why it was named as such!)

Next up in the left side we have Supreme FX Audio solution which in essence an ALC1150 with ASUS secret sauce.
The features  included

The Maximus VII Formula have no shortage of fan connectors, the board has in total eight fan connectors all of which can be controlled individually by the bundled AI Suite 3 software.

The below picture shows all the fan connectors marked in red

On the graphics side of things the board has 3 PCIe Slots with the top two running in both PCIe 3.0/2.0 mode and the bottom one running at only PCIe 2.0 mode. All the slots run at full x16 speeds when individually populated.

The board supports Three way CrossfireX at x8/x8/x4 speed and Quad SLI(Two Dual GPU cards) at x8/x8 speed since there isn’t any PLX chip onboard.

There are 3 PCIe 2.0 x1 slots for peripherals such as sound cards etc.

On the VRM side of things Asus used its hugely successful DIGI+ design which is in its third revision by now. The revision scream “overkill” and what we have here is really overkill;we have a 8+2 phase design for the CPU,NB and Dram.

The full implementation consists of special black metallic Nichicon GT series caps are  up to 10,000 hours at  105C operating temperatures along with gold plated “Blackwing” units which have a very unique look with a fin design running vertically on the outer shell of the choke allowing for even better thermal capabilities and ensuring minimal power loss and maximum power delivery.To round it off we have special mofset which is upto 50% smaller(according to Asus) ensuring 90% more efficiency(again as said by Asus).

Running the whole implementation is the Digi+ controller which provides different modes of power delivery as the the situation warrants form optimized mode to full power mode.

That concludes the board layout,let us move on the Bios and software bundles which at times can make or break the board

As earlier i will let the pictures do the talking mostly.

This is where you should be if you are interested in overclocking.

and that concludes the Bios portion.

With that aside lets take a look at the benchmark results.

We ran the Processors at 4.1 GHz,4.3GHz and 4.5GHz;anything after that was unstable for benchmarks and normal running.Although the board was running flawlessly with any amount of stress put upon it we figured out it was the CPU which played spoil sport with us.

For the inquisitive ones here are the CPU-Z validation links

With that aside lets dive into benchmark numbers.

First in our list is one of the most non biased Synthetic benchmarks i have seen : Aida 64

Part one of the CPU suite consists of the Queen and PhotoWorxx Benchmark.

This simple integer benchmark focuses on the branch prediction capabilities and the misprediction penalties of the CPU. It finds the solutions for the classic “Queens problem” on a 10 by 10 sized chessboard. At the same clock speed theoretically the processor with the shorter pipeline and smaller misprediction penalties will attain higher benchmark scores. For example — with HyperThreading disabled — the Intel Northwood core processors get higher scores than the Intel Prescott core based ones due to the 20-step vs 31-step long pipeline. CPU Queen test uses integer MMX, SSE2 and SSSE3 optimizations.

It performs the following tasks on a very large RGB image:

Part two of the CPU Suite consists of Hash,Zlib and AES benchmarks.

This benchmark measures CPU performance using the SHA1 hashing algorithm defined in the Federal Information Processing Standards Publication 180-4. The code behind this benchmark method is written in Assembly, and it is optimized for every popular AMD, Intel and VIA processor core variants by utilizing the appropriate MMX, MMX+/SSE, SSE2, SSSE3, AVX, AVX2, XOP, BMI, and BMI2 instruction set extension. CPU Hash benchmark is hardware accelerated on VIA PadLock Security Engine capable VIA C7, VIA Nano and VIA QuadCore processors. 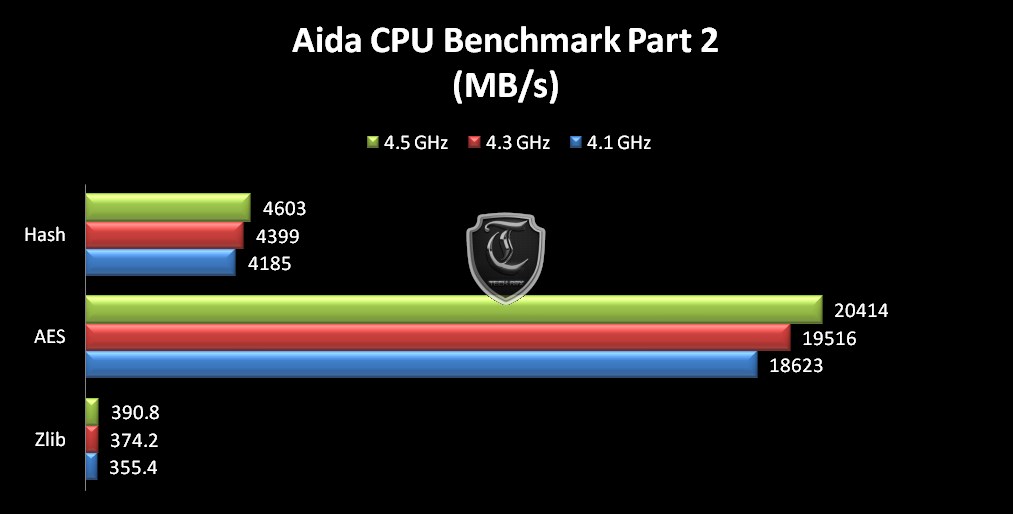 Now coming to the benchmarks which stresses the FPU, we have

This benchmark measures the single precision (also known as 32-bit) floating-point performance through the computation of several frames of the popular “Julia” fractal. The code behind this benchmark method is written in Assembly, and it is extremely optimized for every popular AMD, Intel and VIA processor core variants by utilizing the appropriate x87, 3DNow!, 3DNow!+, SSE, AVX, AVX2, FMA, and FMA4 instruction set extension. FPU Julia test is HyperThreading, multi-processor (SMP) and multi-core (CMP) aware.

Coming to the second part of FPU benchmarks we have,

This benchmark measures the double precision (also known as 64-bit) floating-point performance through the computation of several frames of the popular “Mandelbrot” fractal. The code behind this benchmark method is written in Assembly, and it is extremely optimized for every popular AMD, Intel and VIA processor core variants by utilizing the appropriate x87, SSE2, AVX, AVX2, FMA, and FMA4 instruction set extension. FPU Mandel test is HyperThreading, multi-processor (SMP) and multi-core (CMP) aware.

This benchmark measures the extended precision (also known as 80-bit) floating-point performance through the computation of a single frame of a modified “Julia” fractal. The code behind this benchmark method is written in Assembly, and it is extremely optimized for every popular AMD, Intel and VIA processor core variants by utilizing trigonometric and exponential x87 instructions. FPU SinJulia is HyperThreading, multi-processor (SMP) and multi-core (CMP) aware.

With the mainstream synthetic benchmarks out of the way,lets try some benchmarks that is used in competitive benchmarking.

Super PI is a single threaded benchmark that calculates pi to a specific number of digits. It uses the Gauss-Legendre algorithm and is a Windows port of a program used by Yasumasa Kanada in 1995 to compute pi to 232 digits.

This benchmark encodes a full HD (1080p) video into a high quality x264 video. This is especially CPU intensive and prefers more cores.

3DPM benchmark is made by Ian J Cutress of Anandtech. In his own words

The algorithms in 3DPM employ both uniform random number generation or normal distribution random number generation, and vary in various amounts of trigonometric operations, conditional statements, generation and rejection, fused operations, etc.  The benchmark runs through six algorithms for a specified number of particles and steps, and calculates the speed of each algorithm, then sums them all for a final score.  This is an example of a real world situation that a computational scientist may find themselves in, rather than a pure synthetic benchmark.  The benchmark is also parallel between particles simulated, and we test the single thread performance as well as the multi-threaded performance.

That concludes the benchmarks.Overall every score are in line as expected from a a board like Maximus VII Formula. However the 3DPM multithreaded results are kinda confusing even after multiple re runs.

Asus Maximus VII Formula is indeed a good board. From SupremeFX sound solution to DIGI+ VRM implementation and LN2 mode for overclockers,the board starts with a plan of catering to every niche and it executes the plan with utmost precision.Throughout our testing we found the board to be a dream to work on and easy to operate.

The only downer is that the MPCIE combo is not compatible with 80mm full sized M.2 SSD. The problem is only magnified by the fact since the 60mm or the 40mm SSD ‘s are not available in good number yet.

I would be nitpicking, but at times ASUS’ exhaustive UEFI is pretty intimidating. However the overall experience remains pleasing as ever. This is ASUS’ best Z97 board, but getting the best does come at a price.