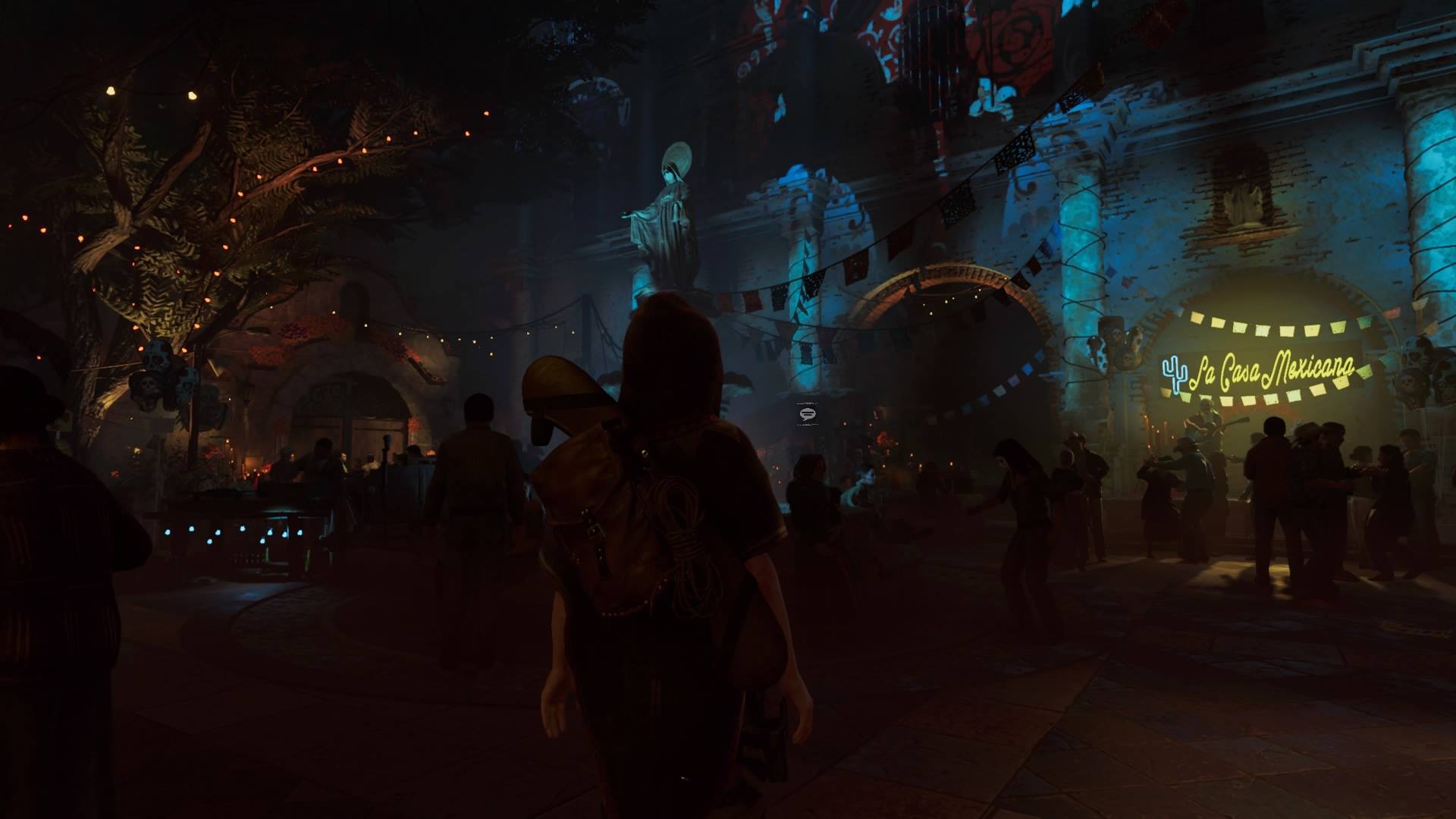 Shadow of The Tomb Raider is the final chapter in the Tomb Raider reboot trilogy and it’s the biggest and most ambitious entry yet.

Shadow of The Tomb Raider sees our heroine Lara Croft out on a mission to stop the apocalypse while fighting off The Trinity, Wild Life and more sinister creatures.

Shadow shares a lot of its core gameplay features from its predecessors while having slightly tweaked out mechanics and some new interesting additions like the ability to rappel and detailed underwater sequences. There’s plenty of Tomb Raiding to do, with challenge tombs and optional tombs being featured alongside the masterfully crafted main story tombs. The puzzles aspect takes a front seat to combat and it is a welcome change, there’s very less fighting and more exploring. 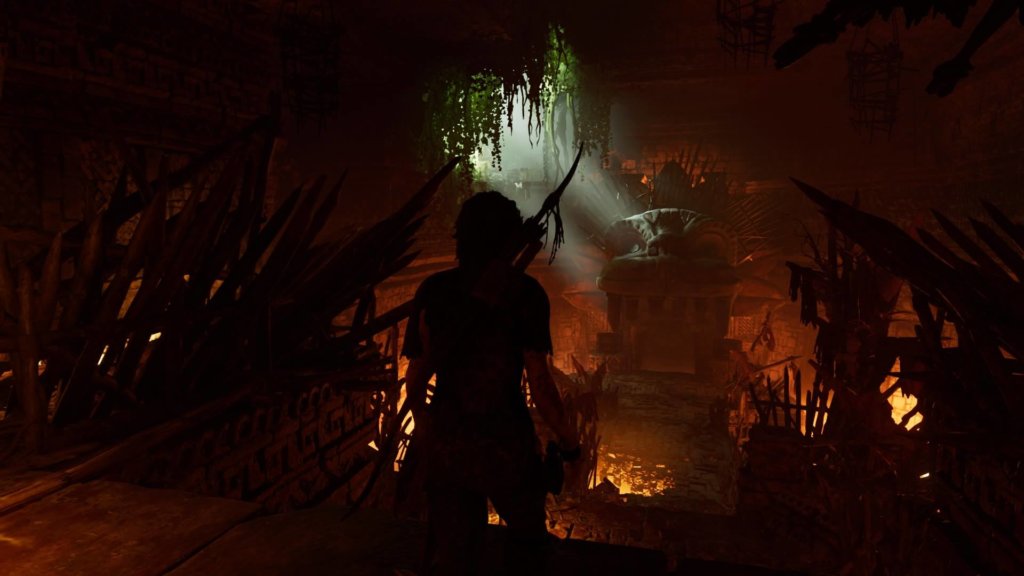 These tombs feature improved, more complex multi-layered puzzles that were always satisfying to solve and combined the multiple mechanics present in the game with deadly hazards, traps and nail-biting platforming gameplay to deliver a blood rushing adrenaline filled session. Sometimes the puzzles would be as simple as pulling a lever and sometimes they would require you to traverse treacherous thin pillars to figure out which sequence the symbols should be. 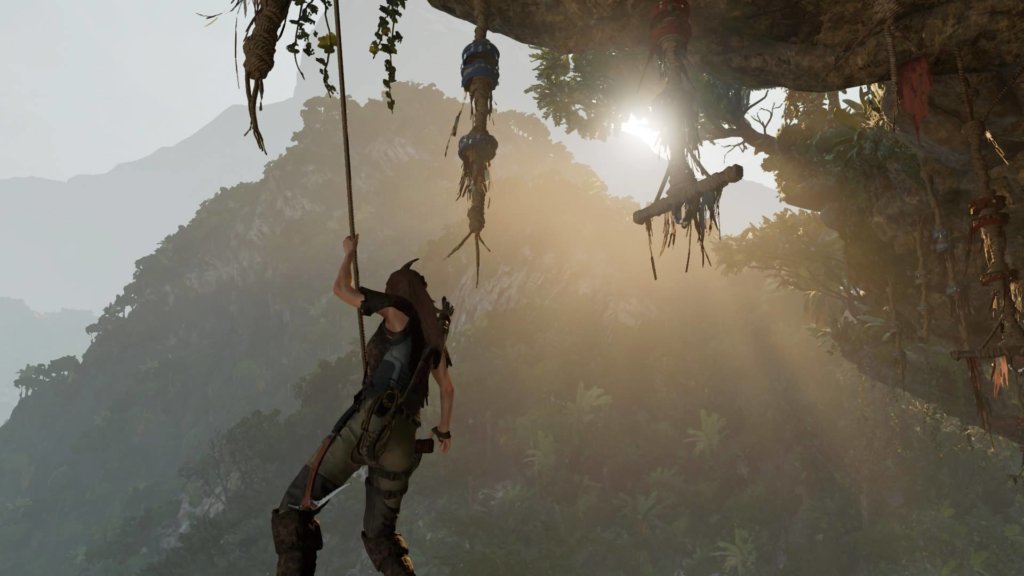 The game has a lot of options in terms of difficulty, and I wished more games would allow this. You can select individual difficulties for Combat, Exploration, and Puzzles which can dramatically affect the way you play the game. Don’t like combat but want more challenge in puzzles? no problem. You can even turn off environmental markers for a more realistic experience that can result in your untimely death if you don’t notice where you’re heading.

There are extensive water gameplay sequences as well, allowing you to explore underwater caves or dive underwater to avoid being spotted by the enemy. Lara’s swimming skills can be upgraded to allow her to stay without air for longer periods of time, or swim faster. 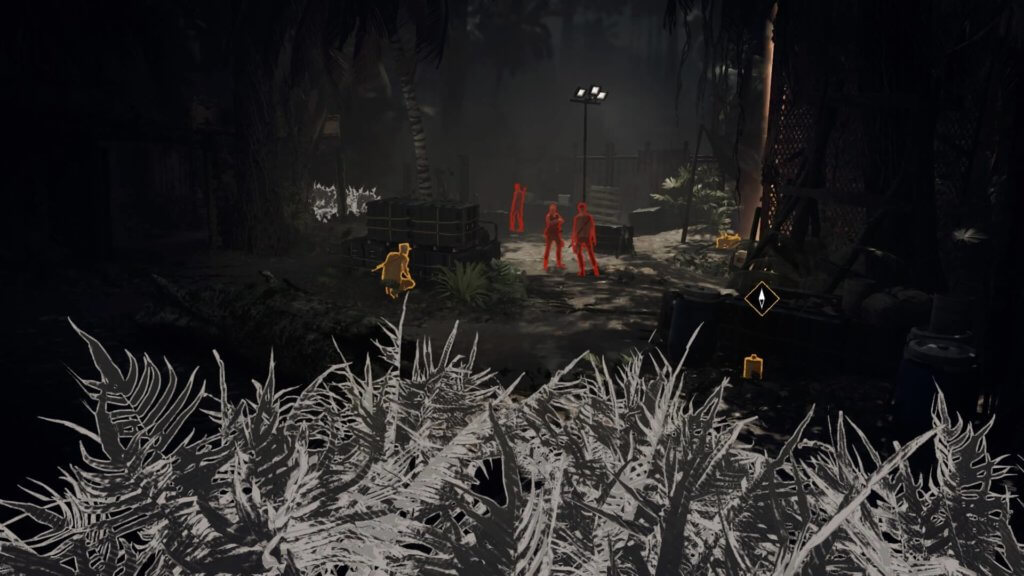 Combat has also been overhauled, allowing for more stealthy approaches. Lara can now cover herself in mud, wear clothing that makes it harder for enemies to spot you and use skills that allow her to strike from the shadows. Most firefights can be totally avoided by distracting enemies and picking them off one by one or going full-on Rambo with guns blazing although I don’t recommend doing that in higher difficulties. 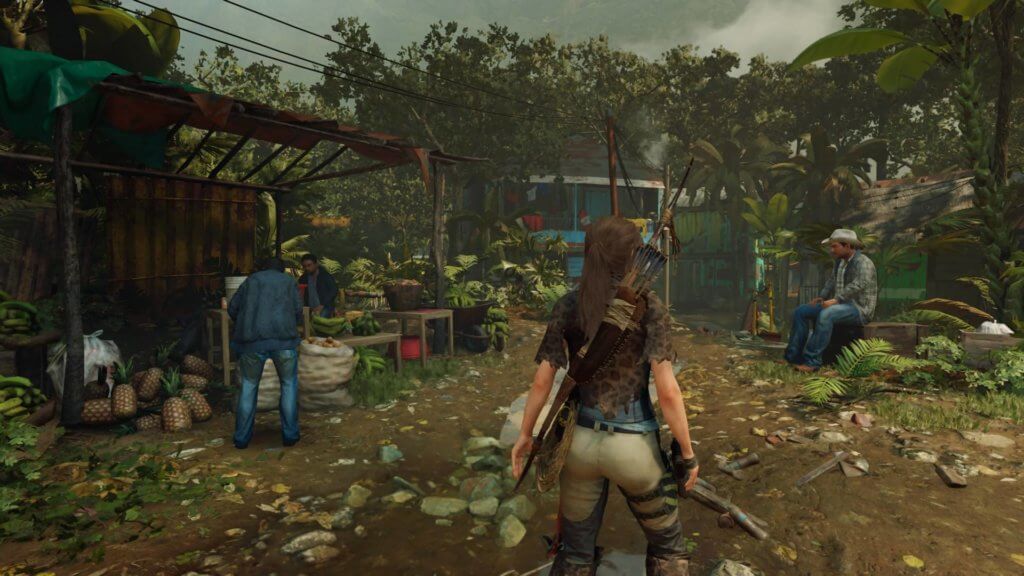 The world has also been expanded and for the first time in the franchise has multiple large hubs that Lara can explore, talk with NPCs, trade with them and undertake side quests. The side quests are mostly fetch quests that require you to clear out a place or bring some item back. I feel like this is a missed opportunity to create a more authentic experience instead of just adding more checkboxes to tick off.

In Shadow of The Tomb Raider, the Lara we meet has matured due to her adventures in the previous games. But facing so much danger and losing her friends have made her guilty and self-centered to some extent. Early on, her recklessness results in an entire town being destroyed by floods and arguably the entire chain of events in the game can be blamed on Lara’s hastiness to stay ahead of Trinity. 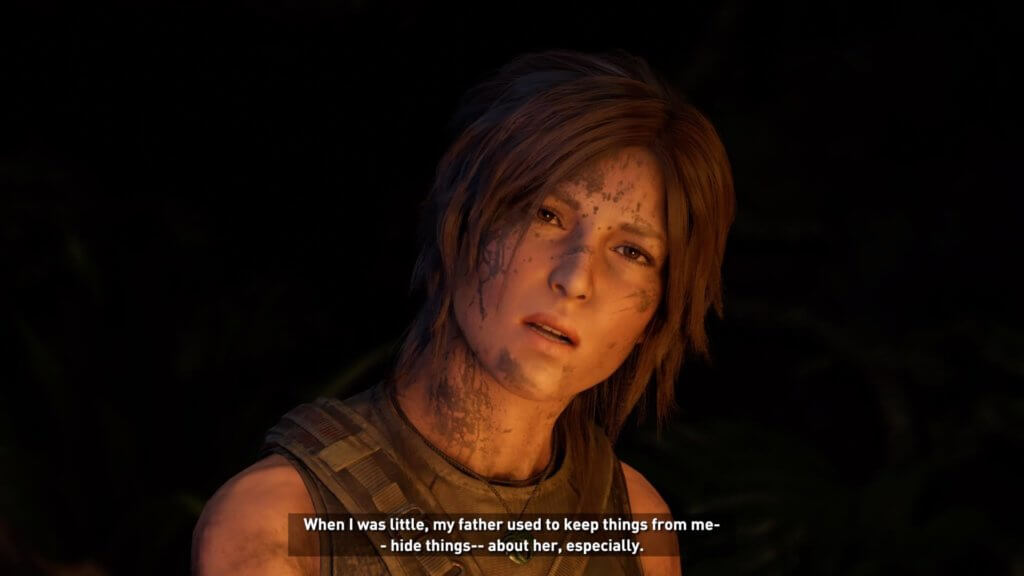 The game also features darker themes than the previous games and does not shy away from showing shocking imagery that I won’t spoil, but this makes they remind you of how Lara’s actions impact the life of others in a drastic way. 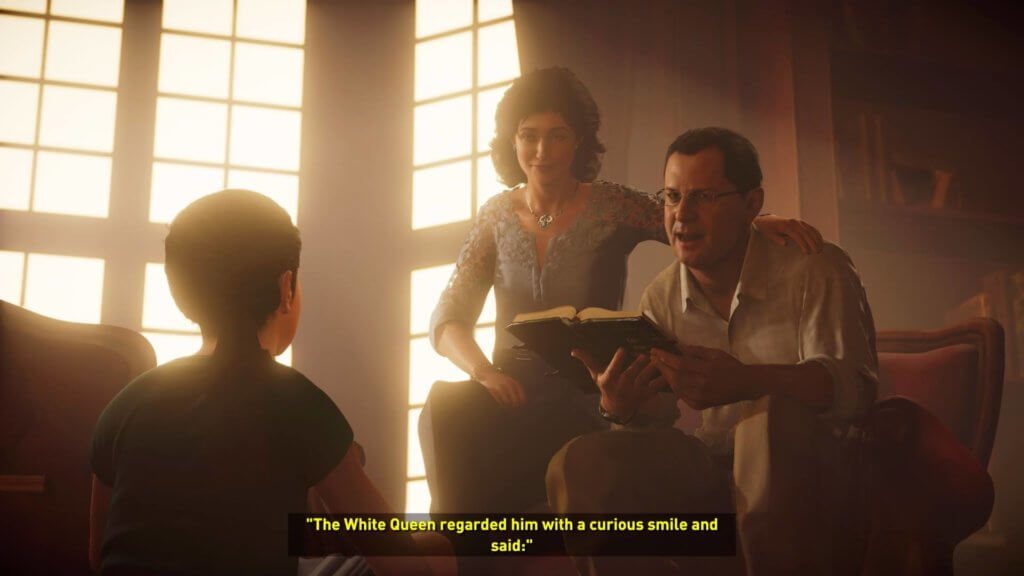 We also get to explore Lara’s childhood and get to know a bit more about her parents and her obsession with stopping Trinity.

Shadow of Tomb Raider is one word – beautiful, from it’s lush and dense forests teeming with wildlife to its dark menacing tombs. The similar attention to detail is also giving to characters in cutscenes, the facial animations are the best in any game I have seen. 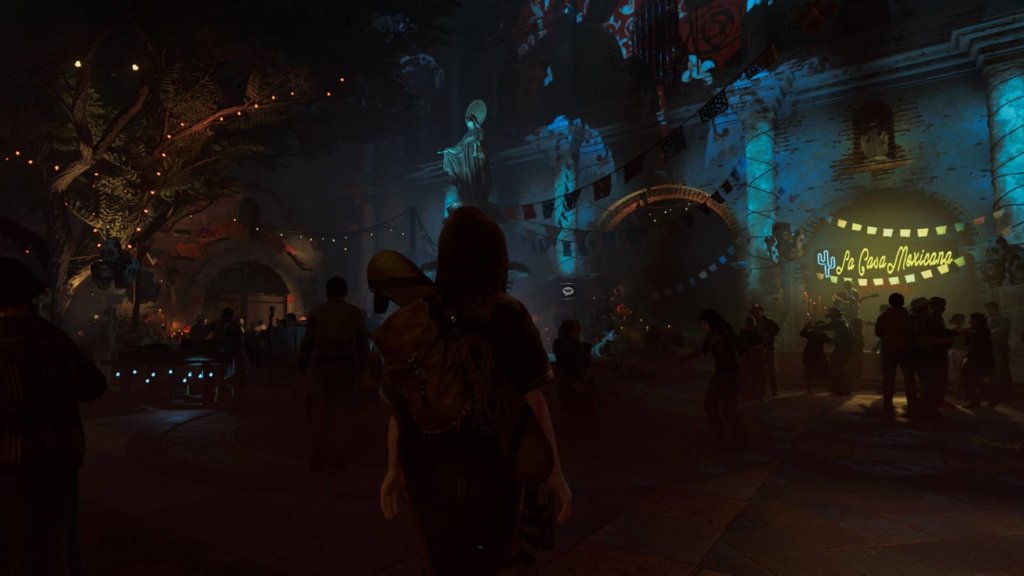 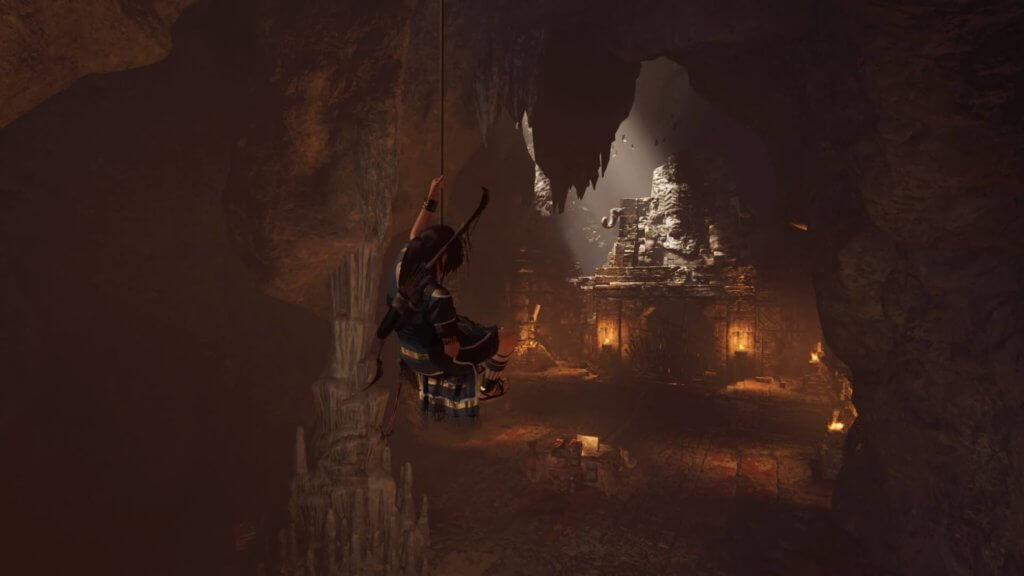 The game runs at 30 FPS with small dips on the base PS4. 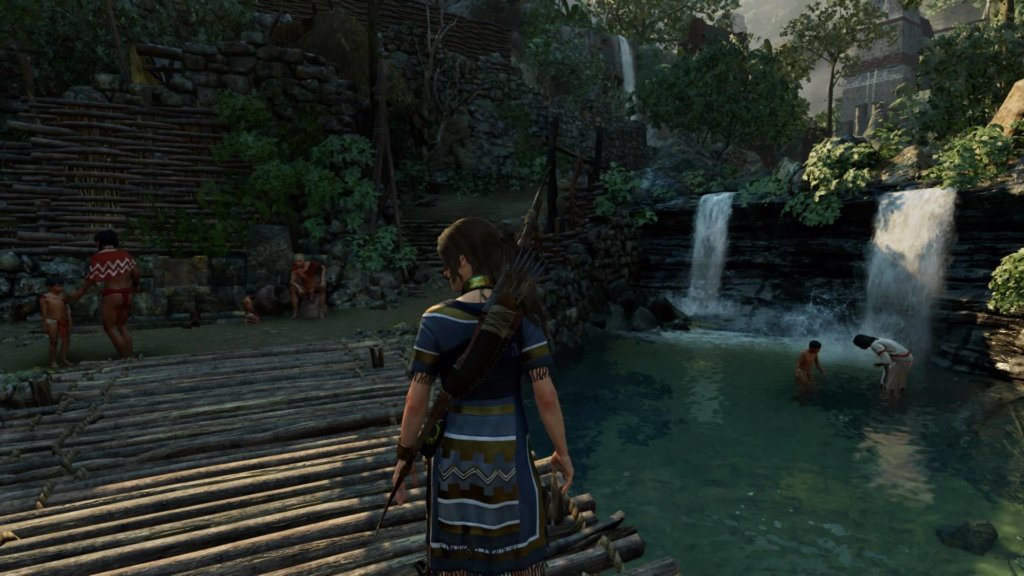 Shadow of the Tomb Raider is the biggest entry to the Tomb Raider franchise yet, but it feels a bit too similar to its predecessors. The open world is also filled with too many meaningless fetch quests and collectibles, but despite its flaws, the final entry in Lara’s saga features gorgeous visuals, fast paced gameplay and many welcome changes that are bound to delight long term series fans.