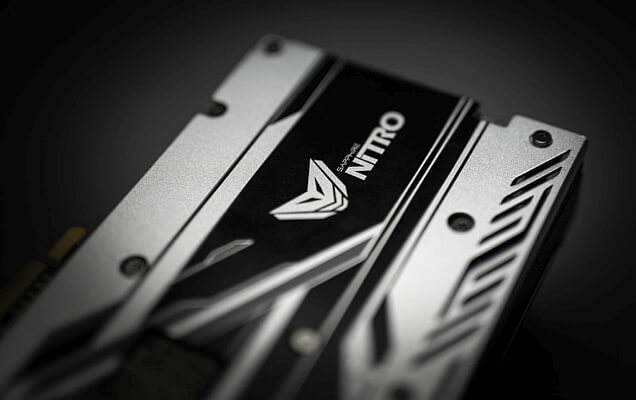 Sapphire has become the first company to officially list a custom RX 480 for sale. Overclockers UK has listed the Sapphire RX 480 Nitro for pre-order. The manufacturer has given out a set of  pictures which show us the look of the card.

Apart from the fancy backplate, there are two features that are quite intriguing. First, the button that can reportedly switch the LED illumination from temperature to GPU load mode. It should also be able to switch the illumination off completely. Second, is the removable fans. This is nothing new and has been done previously, but Sapphire have created something special here as the fans can supposedly be removed along with the motor. Such a feature will facilitate individual fan replacement.

The RX 480 Nitro runs at 1325 and 1350MHz. The card also sports a 1 x 8-pin PCI-E power connector, over the 6-pin power connector of the reference models. This allows the card to draw more than 175W of power for more stable overclocking. Coming to display outputs, the Nitro sports 2x DP, 2x HDMI and a single DVI port. Twin Fan Black Cooler with something called Nitro Pass-through also improves cooling.

At £249 the card should launch sometime later this month.

Meanwhile, AMD has accepted the RX 480’s PCI-E overcurrent issue in an official statement. AMD is working on a fix. “As you know, we continuously tune our GPUs in order to maximize their performance within their given power envelopes and the speed of the memory interface, which in this case is an unprecedented 8 Gbps for GDDR5. Recently, we identified select scenarios where the tuning of some RX 480 boards was not optimal. Fortunately, we can adjust the GPU’s tuning via software in order to resolve this issue. We are already testing a driver that implements a fix, and we will provide an update to the community on our progress on Tuesday (July 5, 2016).” reads the statement.