The term Black Edition is relative. For some manufacturers the Black Edition represents the crème-de-la-crème of their product range, a limited edition existence filled with premium features. For GIGABYTE, the Black Edition moniker represents rigorous stress testing done for a week (168 hours). This extreme level of full system testing ensures that each motherboard retain the same quality. More often than not, one expects this level of testing to be present in flagship boards, but with GA-Z97X-UD5H BK, GIGABYTE is aiming for a double whammy: give a mainstream board the Black Edition treatment without breaking the bank. The UD5/UD5H by virtue of naming represents GIGABYTE’s second best mainstream board and came with Dual NICs, Multi-GPU support, Upgraded Audio plus everything Ultra Durable had to offer. With Z97, GIGABYTE has upped the ante, and their Ultra Durable 5 plus certification now brings an upgraded VRM Heatsink, an all-digital power delivery system featuring premium IR PoweIRStage PWM controller and driver ICs and 10 USB ports onboard, while the usual culprits remain: dual NICs courtesy Intel/ Killer E2201 chips, upgraded audio courtesy Realtek ALC1150 with audio path separation and EMI shielding and CrossFireX/SLI support (up to 3 cards for CrossFireX, but only 2 card SLI since the third PCIe slot runs at x4). Z97 also brings on board SATA-Express and M.2 connectors, and an upgraded UEFI and GIGABYTE’s ever-improving apps (bundled software) complete the package.

Personally I think the UD5H-BK is one of the more attractive boards in GIGABYTE’s lineup, and the greyish yellow/black livery gives a subtle yet very classy look to it. The Chipset and VRM Heatsinks are not connected, though the VRM Heatsinks are connected to each other by a metal heatpipe. The Chipset Heatsink is moderate in size due to absence of any additional components like a PLX chip. As always, we will start with the top left hand corner of the motherboard and move clockwise to examine the various components on board. 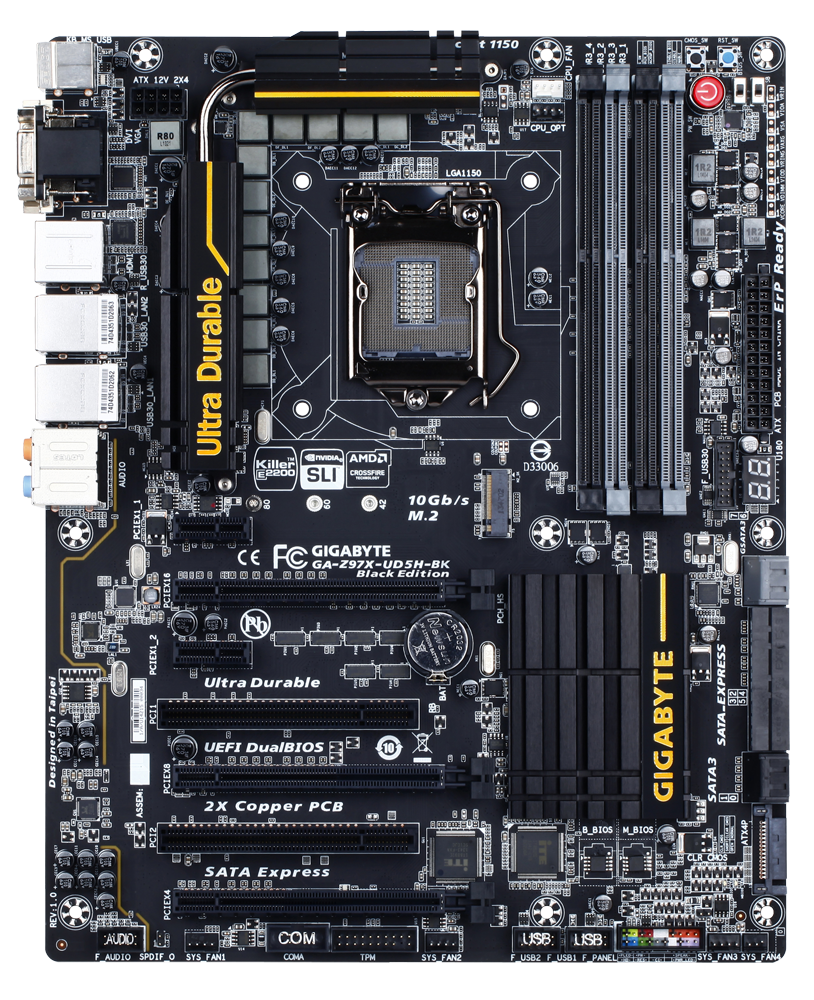 GIGABYTE is using a 2x Copper PCB design for this board which aids in overclocking. With their newer generation of motherboards, a glass fabric PCB is being used for humidity protection.

The 8 pin ATX 12v connector is located in the empty space between the two VRM Heatsinks and the rear I/O. The VRM Heatsinks carry the Ultra Durable labelling and the ferrite core chokes are clearly visible beneath them. These are rated for 60A and are server grade as per GIGABYTE’s documentation. Digging further we see the IR3563B, a single loop all-digital PWM controller on helm, and IR3598, a Dual/Doubler Interleaved MOSFET Driver driving 12 VRM phases (6 true phases, doubled using IR3598). The high-side and low-side MOSFETs are SiRA12DP (25A/6.5W). The RAM power delivery is 2 phase, and is handled by an IR3570A PWM controller. Twelve ferrite core chokes complete the power delivery circuitry and are easily visible underneath the VRM heatsink. The CPU socket area is clutter free. As with GIGABYTE’s boards, the socket uses 15μ gold plating to ensure better connectivity between the processor leads and socket pins as well as lessen chances of corrosion during long term use.

The top right hand section of the motherboard has color coded DRAM slots. Four slots are provided which can accommodate up to 64GB of DDR3 memory with speeds up to 3200MHz. Between the DRAM slot and the VRM heatsink we see two 4 pin fan headers, CPU_OPT and CPU_FAN. On the right hand side of the DRAM slots there are POWER/RESET/Clear CMOS buttons as well as two BIOS switches to select single BIOS/dualBIOS mode and choose between BIOS 1&2.  Further right, there are voltage checkpoints. Coming southwards, the 24 pin connector is in its default position; an internal USB3.0 header and a two-digit debug LED is nearby as well. 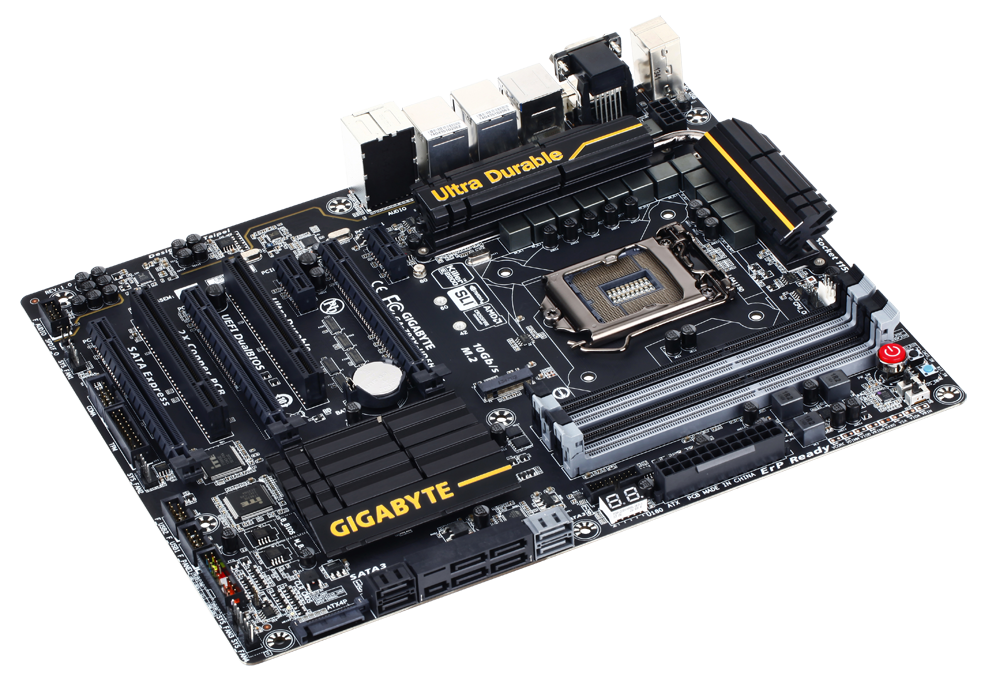 There is also a SATA power connector beside the SATA ports to provide additional power to the board in case of a multi GPU configuration to ensure more stability.

For expansion, we have three PCIe3.0 x16 slots, operating at x16/x8/x4, hence supporting 3-card CrossFireX and only 2-card SLI. Two PCIe2.0 x1 slots and 2 PCI slots are also onboard. The slot spacing is enough to handle triple slot cards in 2-card configuration. I would advise against going for a 2+ card configuration with this board since the last card would be crippled in terms of PCIe lanes.

For audio, the Realtek ALC1150 codec makes its return again. GIGABYTE couples this with a Texas Instruments N5532 OP-AMP which can drive headphones with up to 600 ohm impedance. There is audio PCB separation, EMI shielding and separate PCB layers for both right and left channel. Sadly, the motherboard we received was Revision 1.0 and didn’t come with LEDs along the separated audio path. GIGABYTE’s website lists Revision 1.1 which comes with this feature. The ALC1150 has an SNR of 115DB.

Between the audio section of the board and the PCIe slots, one can see the Qualcomm Aetheros Killer LAN chip. The one on this board is E2201, capable of speeds up to 1000Mbit. 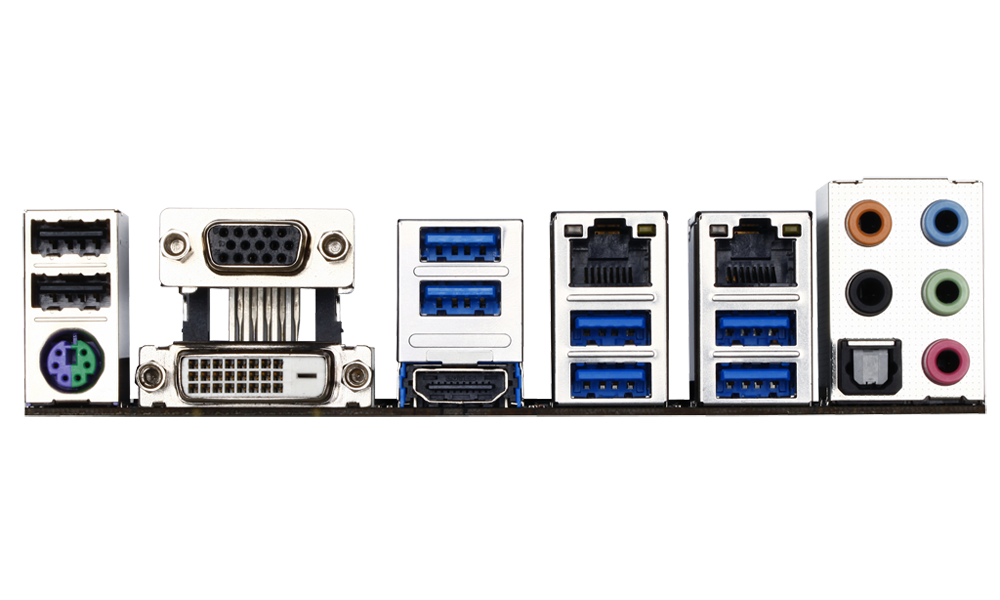 The I/O has a nice layout. We have a PS/2 mouse/keyboard combined port, two USB2.0 and six USB3.0 ports (USB2.0 and two USB3.0 from the Z97 chipset, four USB3.0 ports from a Renesas uPD720210 chip), dual LAN (LAN1 is powered by the Killer E2201 chip, LAN2 powered by an Intel I217-v Ethernet controller), audio connectors including optical S/PDIF out and display connectors including a DVI-D, a D-Sub and a HDMI port. Support for up to 3 displays at the same time is provided. One note to make here is that the LAN ports do not support teaming. All the USB and LAN ports have ESD protection and there is an anti-surge IC on board to protect sensitive parts of the motherboard from voltage surges.

In the box, you get:

The BIOS/UEFI is identical to the previous two GIGABYTE boards we reviewed, and so is the bundled software package, so we won’t discuss them in detail here. As the name suggests, there’s a black theme overlay on both the OC UEFI and the bundled software, but the core functionality of both remains the same. 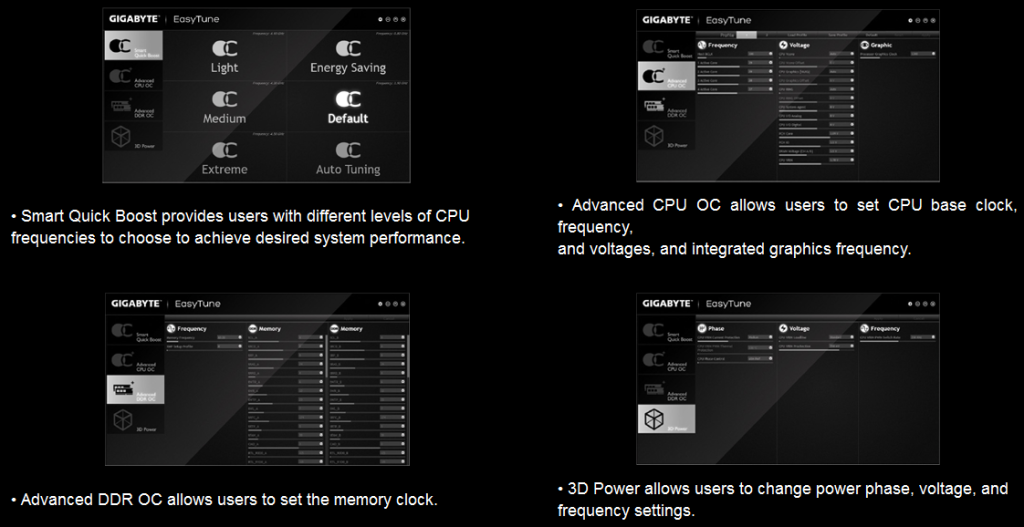 For an in-depth look at GIGABYTE’s Z97 UEFI and bundled software, please read this review here

First up is AIDA64. We ran the full suite of CPU and FPU benchmarks and compared the results at different processor overclocks at 4 GHz and 4.2 GHz. 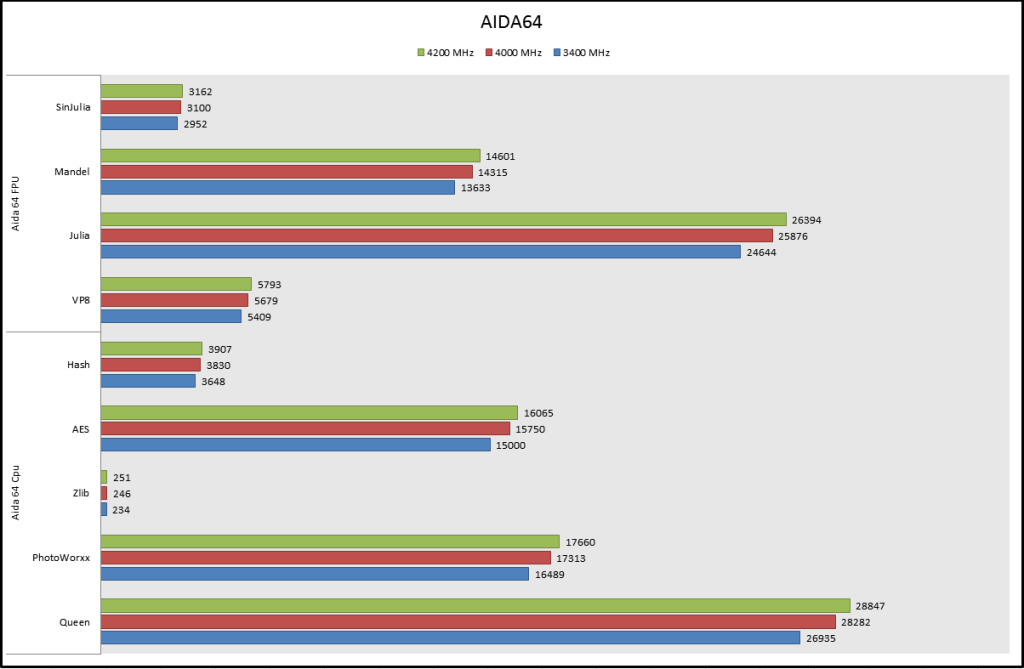 Next up, Cinebench. The popular rendering program is used as CPU benchmark. At 4.2 GHz, the 4670K gains around 10% performance. 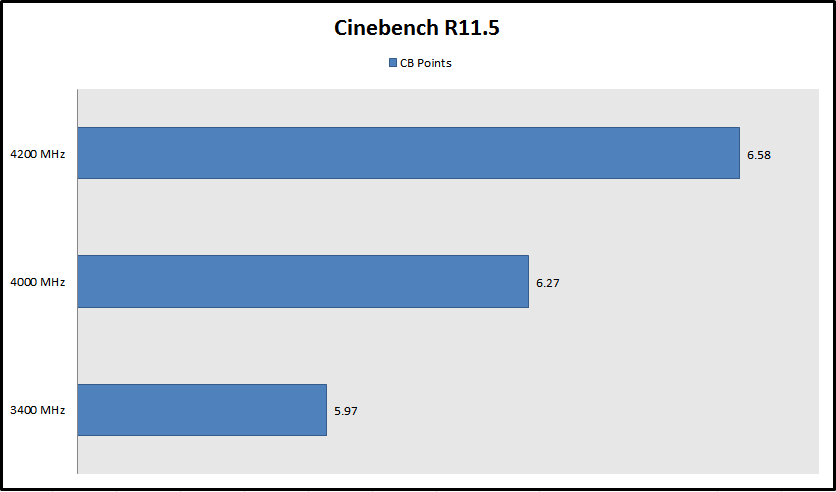 Last up is Super Pi. Super Pi is a single threaded benchmark that calculates pi to a specific number of digits. It uses the Gauss-Legendre algorithm and is a Windows port of a program used by Yasumasa Kanada in 1995 to compute pi to 232 digits. 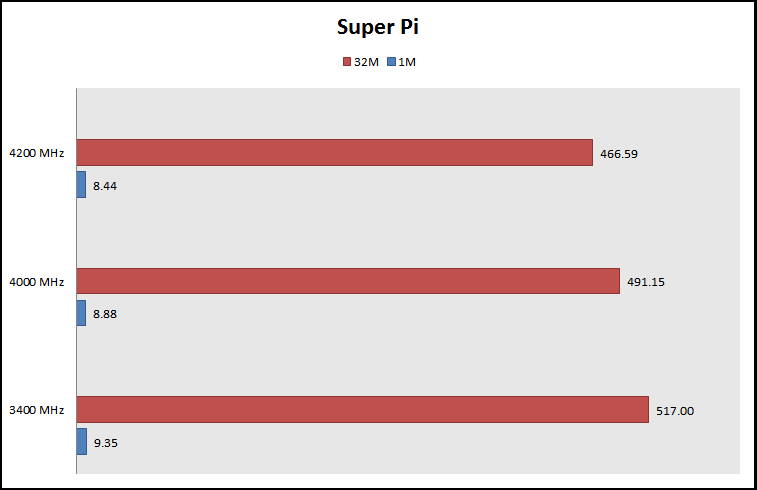 Again we see similar scaling of performance when the processor is overclocked. At 4.2GHz, the 4670K is almost 10% faster than stock.

The maximum stable overclock reached with this board was 4.6GHz. 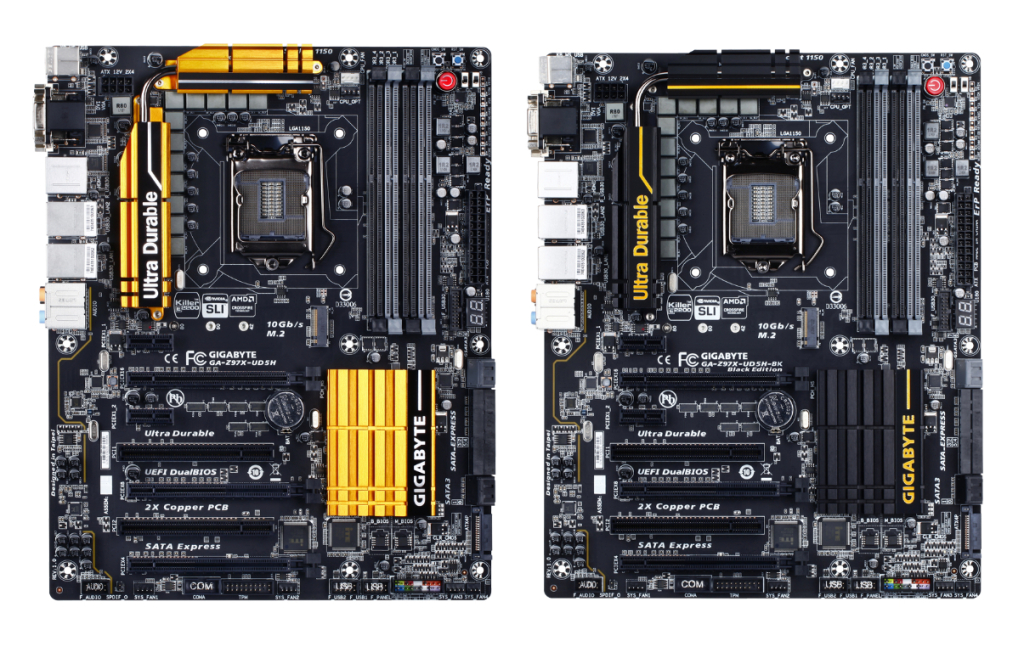 The GA-Z97X-UD5H-BK is an interesting proposition for sure. What the user gets is basically a ‘Black Edition’ paintjob when compared to the Z97X-UD5H. While GIGABYTE promotes every black edition board being rigorously tested for a week, I am not sure how much that translates into real life benefits. The VRM and power delivery components are the same, the USB/LAN/Storage/Audio/Expansion slots are the same, and the software bundle/UEFI have similar options in them, albeit the Black Edition board has a black theme going on. The upgraded aesthetics are a hit-or-miss thing, but we definitely liked the Black Edition more than the original UD5H. Performance wise, the board performed really well throughout our time with it and we have no problems recommending it.

Even more baffling is the price difference between the two boards. At the time of writing this article, the UD5H-BK is only $5 pricier than the original UD5H. Since the price difference isn’t going to burn a hole in your pocket, it makes our conclusion easier : if the black and gray livery is your thing, UD5H-BK is THE board to get. Others will be happy with the original, UD5H.

Board/APP picture courtesy: GIGABYTE. Our HDD with the pictures crashed a day before and took all the data with it. Since we already returned the board, we decided to take pictures from the GIGABYTE website and use them for our review. Inconvenience is regretted.