Three companies, GIGABYTE, Cooler Master, and ADATA recently conducted a joint Power User Meet in Mumbai, Maharashtra. The purpose of the meet was to meet and interact with the enthusiasts and power users and take their feedbacks, as well as to showcase the latest products from their stable.  The star of the show was GIGABYTE’s in house overclocker HiCookie, who demonstrated his famous OC skills in a live event.

GIGABYTE had the biggest presence in the event and they focused on the freshly released Intel HEDT platform (Haswell-E and the X99 chipset).  Supriya Makname, GIGABYTE’s product manager, in a brief presentation talked about the Taiwanese manufacturer’s key focus areas when it came to X99 boards, as well as some unique features that GIGABYTE offered in their motherboards. Prathamesh Patil, FAE, GIGABYTE, gave insights about the overclocking features introduced with X99 and his personal experiences with a few boards that he got to test. The feedback session for GIGABYTE’s motherboards saw many interesting questions and views opined by enthusiasts, from motherboard aesthetics to spacing around the CPU socket to allow for beefier air coolers. 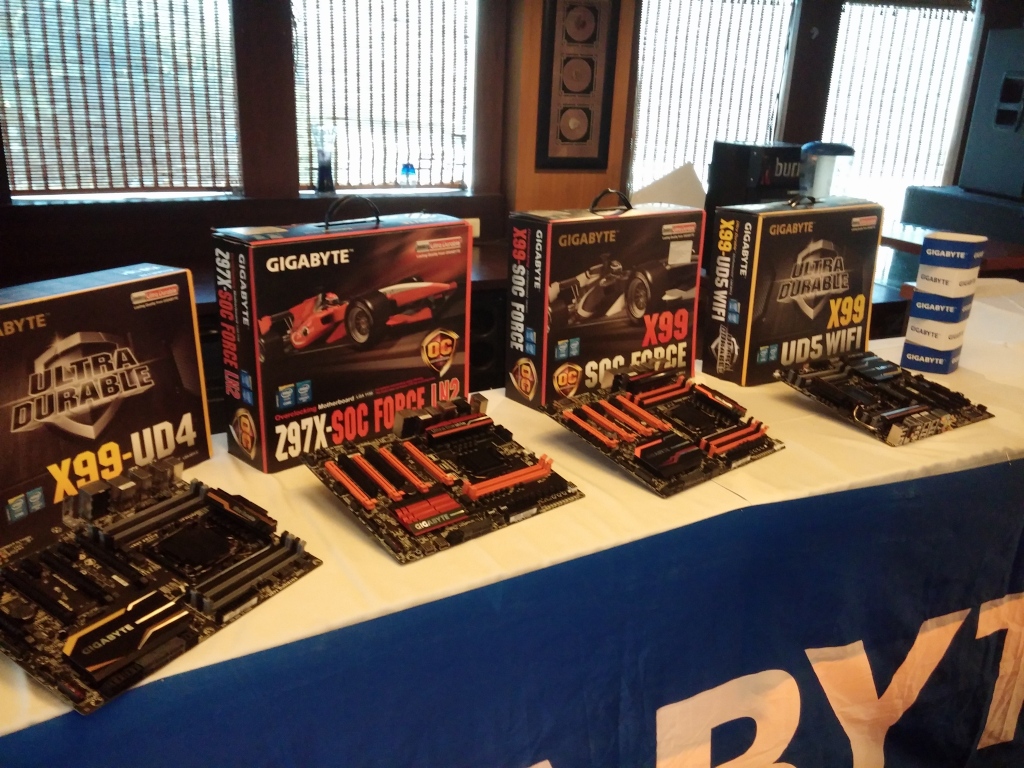 This session paved the way for HiCookie to come to center stage. He had been prepping the X99 SOC-Force motherboard for some extreme overclocking, but before he got to that, he explained the thought process behind designing the OC motherboards and the different features built into it. This turned out into an enjoyable QnA session between the famous overclocker and us, and a lot of experiences were shared. 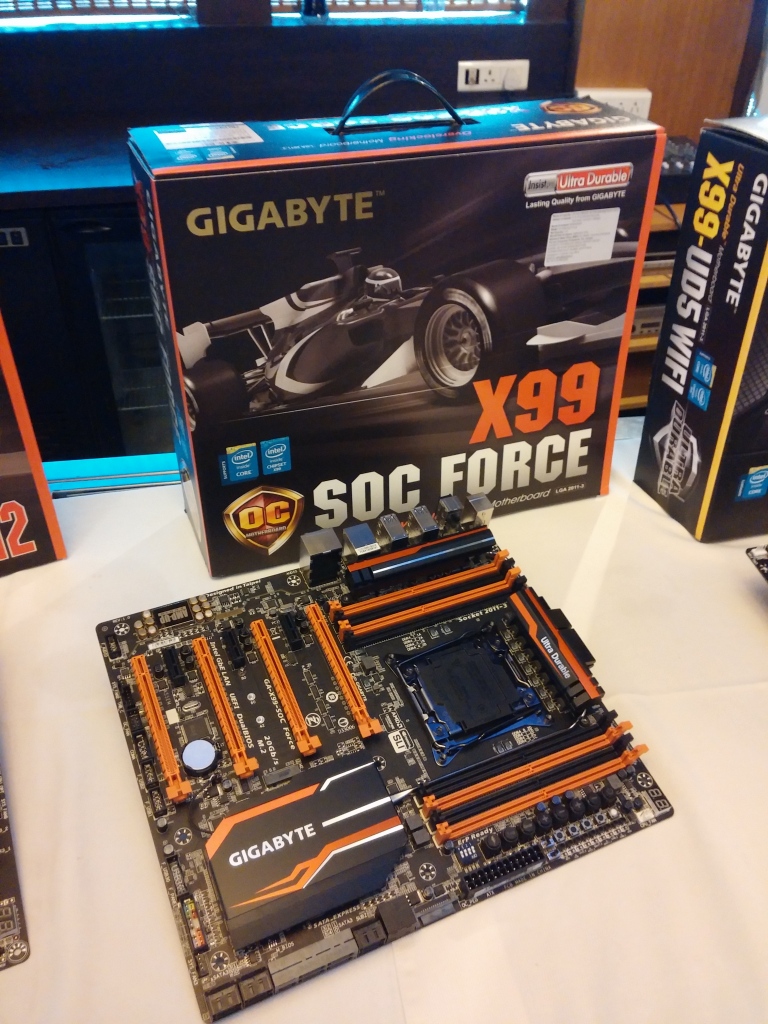 GIGABYTE already has a couple of X99 boards available in the Indian market and another few are on the release pipeline. With X99, their entire motherboard range will be using an All-Digital Power Design. That means using the trifecta of International Rectifier PWM controller/driver ICs (dubbed PowIRstage, now in their 4th generation), server level Copper Bussmann chokes and durable black solid capacitors. IR’s single package design for High Side/Low Side MOSFETs and their driver ICs is also onboard which improves overall thermal capabilities over traditional Multi Chip designs. 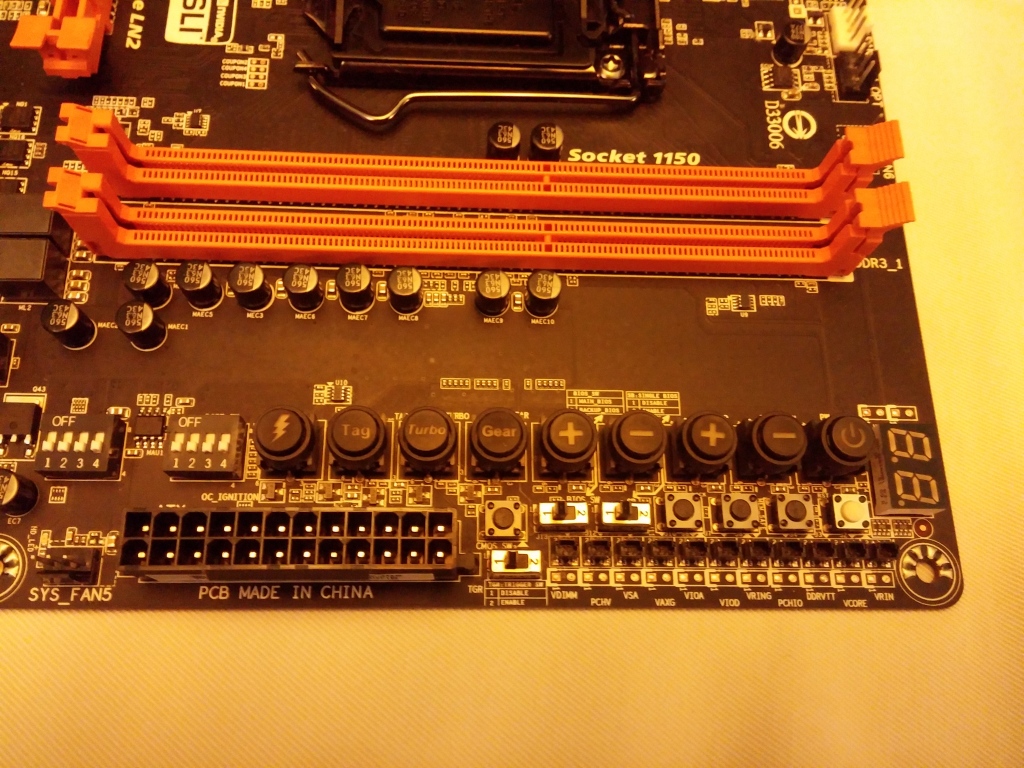 For X99 GIGABYTE is using a 30 micron (6x normal) gold plating for the CPU socket, four PCIe slots and the all the DRAM slots, doubling that used in their previous motherboards. The motherboards continue to use 2x Copper PCB Design, and a newer Glass Fabric PCB.

One little improvement that everyone lauded was the component free area around the motherboard screw mounting holes that was introduced with X99. This was a common complaint and it was nice to see GIGABYTE finally address this. 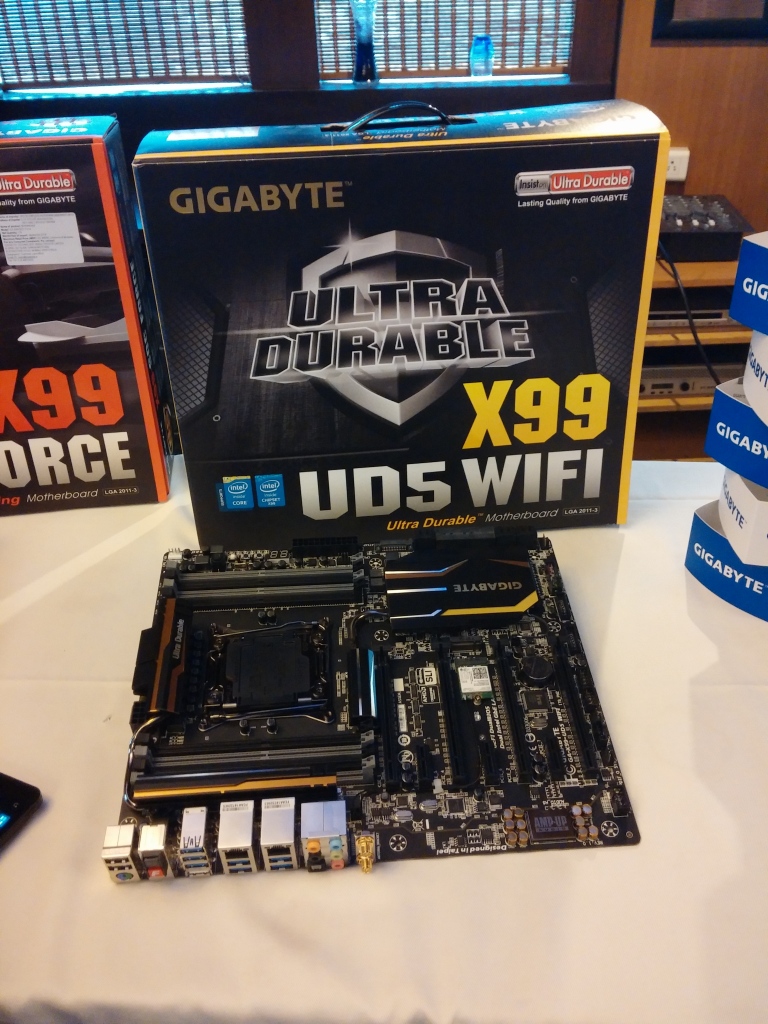 Aesthetic changes were onboard too. The heatsink LEDs are a new addition to the X99 range, as well as Rear Panel LED light, something GIGABYTE is calling Ambient LED (this also includes the LED lit separation of audio path). The implementation is simple yet effective: they have made the rear I/O shields UV reactive, and through a small incision in the shield have placed an UV LED which feeds off a motherboard connector, giving the entire I/O panel a glow. All the LEDs are controllable via the APP Center and have a couple of modes for users to tinker with. 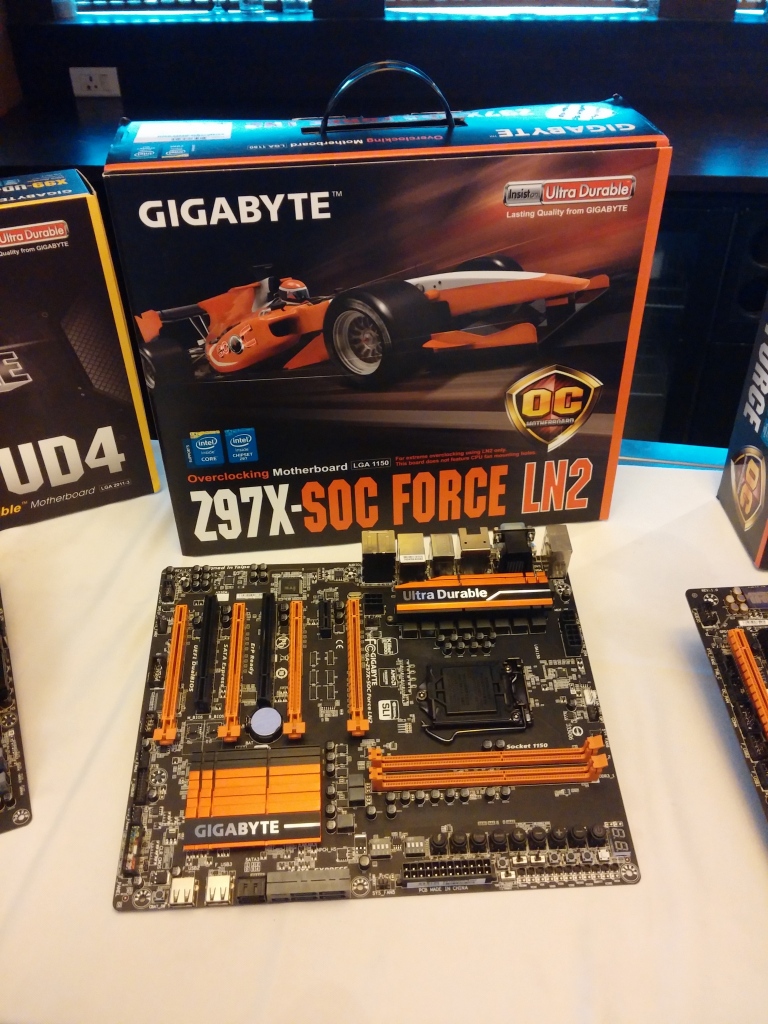 Cooler Master demonstrated their newest NovaTouch TKL mechanical keyboard. The keyboard uses Hybrid Capacitive Switches from Topre and is fully compatible with Cherry MX key stems. It is ten key less (hence the TKL name), has a micro-USB interface, detachable cable with gold plated USB connector, and has N-key rollover. This is CM’s priciest keyboard till date, but judging by the features this is going to be a very interesting one. We will be posting a review of this keyboard soon.

On the opposite end of the spectrum, Cooler Master is also introducing their Octane keyboard and mouse combo. This will replace the Devastator. The Octane keyboard uses rubber dome keys and can register up to 19 simultaneous keystrokes. Both the keyboard and mouse feature updated aesthetics and seven interchangeable backlight colors. Sanket Naik, CM’s Marketing Manager, acknowledged that the revision was done with gamers in mind who wanted best value for money, both aesthetic wise and performance wise.

Cooler Master is also revamping their Power Supply segments. We saw earlier the release of their High-end V-series of PSUs, with the top end V1200 being an 80 PLUS Platinum certified unit. Seasonic is the OEM for these power supplies, though Cooler Master emphasizes that they improved on the design with their in-house research. Other than that, V series semi-modular, and GM series is also on the list, replacing budget/mid-end PSUs. Channel Well and Enhance are the OEMs of these units.

ADATA showcased their range of memory and solid state drivers. The company, though found in 2001, opened their Indian subsidiary rather recently on 2010, but they have been growing their presence ever since. Worldwide, they are in the top-five-list of memory manufacturers. Ashu Mehrotra, Marketing Manager, ADATA, gave us insights into the company’s focus for 2015 and new product lines launching in India. 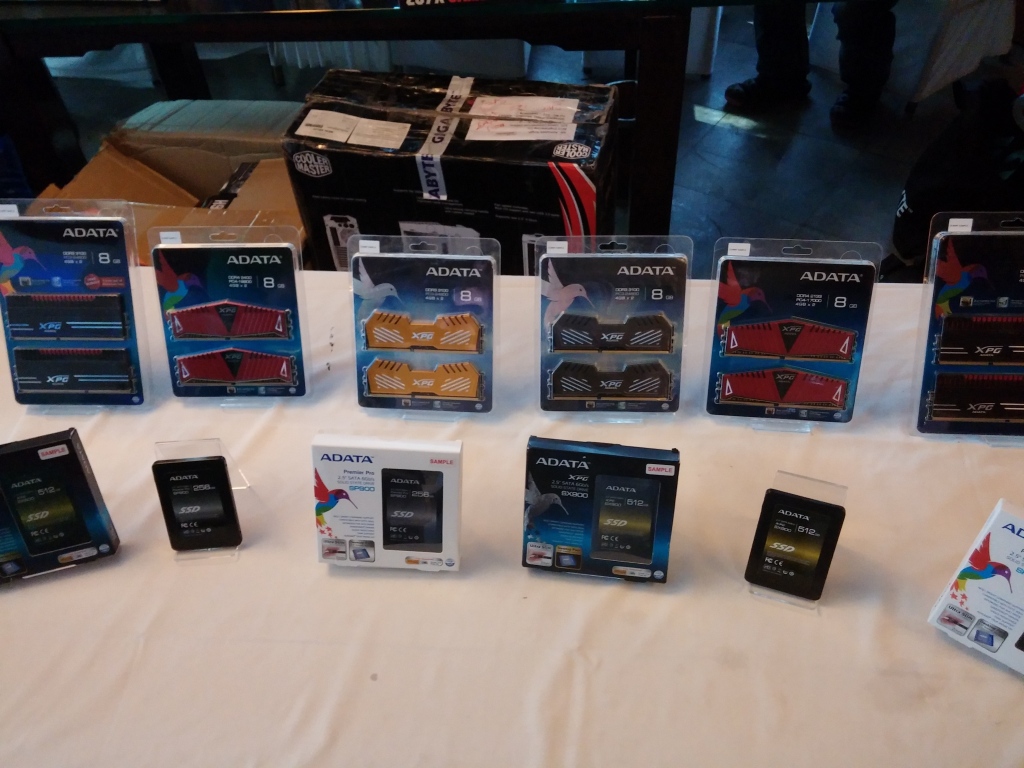 The XPG line is quite renowned with gamers worldwide and with X99 ADATA has come out with DDR4 versions of that SKU. Dubbed XPG Z1, they come in 4/8 GB capacities, single/dual rank modules and are available for speeds up to 3200MHz (PC4-25600, 1.2v). DDR3 memory sticks were also on display. 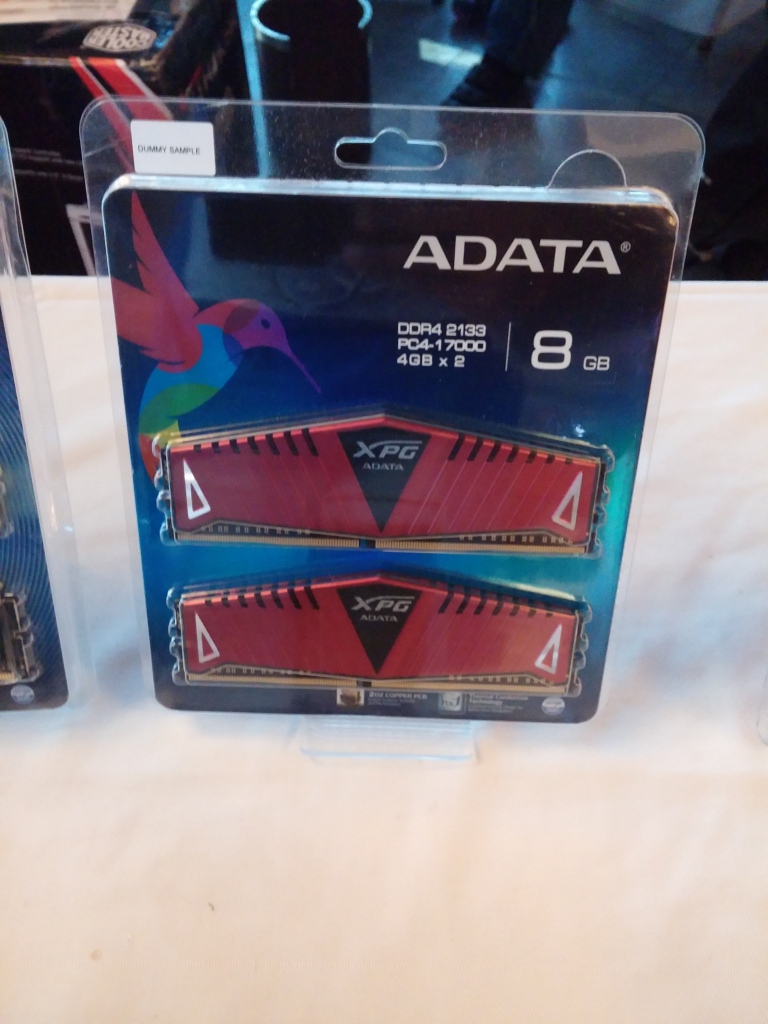 On SSD side, ADATA showed off their Premier Pro and XPG lines of SSDs. Both SSDs use a LSI SandForce SF-2281 controller, but while the value oriented Premier Pro SP900 uses 25nm asynchronous MLC NAND, the costlier XPG SX900/910 uses the faster synchronous variant. Both SSDs SKUs are available up to 512 GB capacities.

The extreme overclocking session saw HiCookie use an Intel Core i7-5960X, GIGABYTE’s X99-SOC FORCE, and ADATA’s XPG Z1 2400MHz DDR4 memory, running off a Cooler Master V1200, to demonstrate how easy it was using GIGABYTE’s built in tools to overclock. The coolant used was Liquid Nitrogen, and he managed to push the 3 GHz processor to a whopping 6.4 GHz. He also overclocked the RAM modules to DDR4-3000. 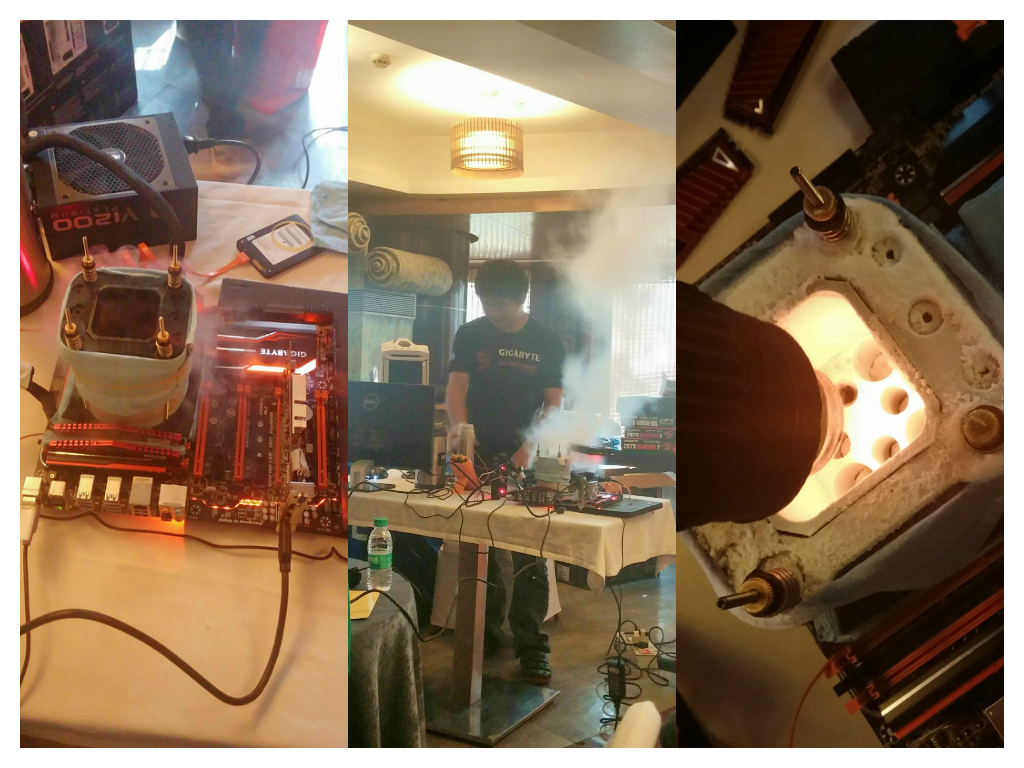 The last part of the day saw a RAM overclocking competition, where a test system comprising of GB/ADATA/Cooler Master (Core i7-5930K, X99 SOC Force, GTX 980 Gaming G1, Nepton 240M, ADATA XPG Z1  2400MHz DDR4, ADATA SSD, CM V1000, Cooler Master Storm Stryker) components were used as the platform for participants to show their overclocking skills. The winner ended up pushing the RAMs to DDR4-3286, which was no mean feat. The prize was a Z97X-SOC motherboard.

The interaction part was the one which attracted me the most, aside from getting to see/test new products. We had an informal meeting with HiCookie the previous night, and during dinner had the chance to interact with him. I believe that experience of sharing knowledge and getting to know things from him was invaluable. We at TechArx will be posting reviews of products talked about here pretty soon. Till then, here’s wishing everyone a Happy New Year.