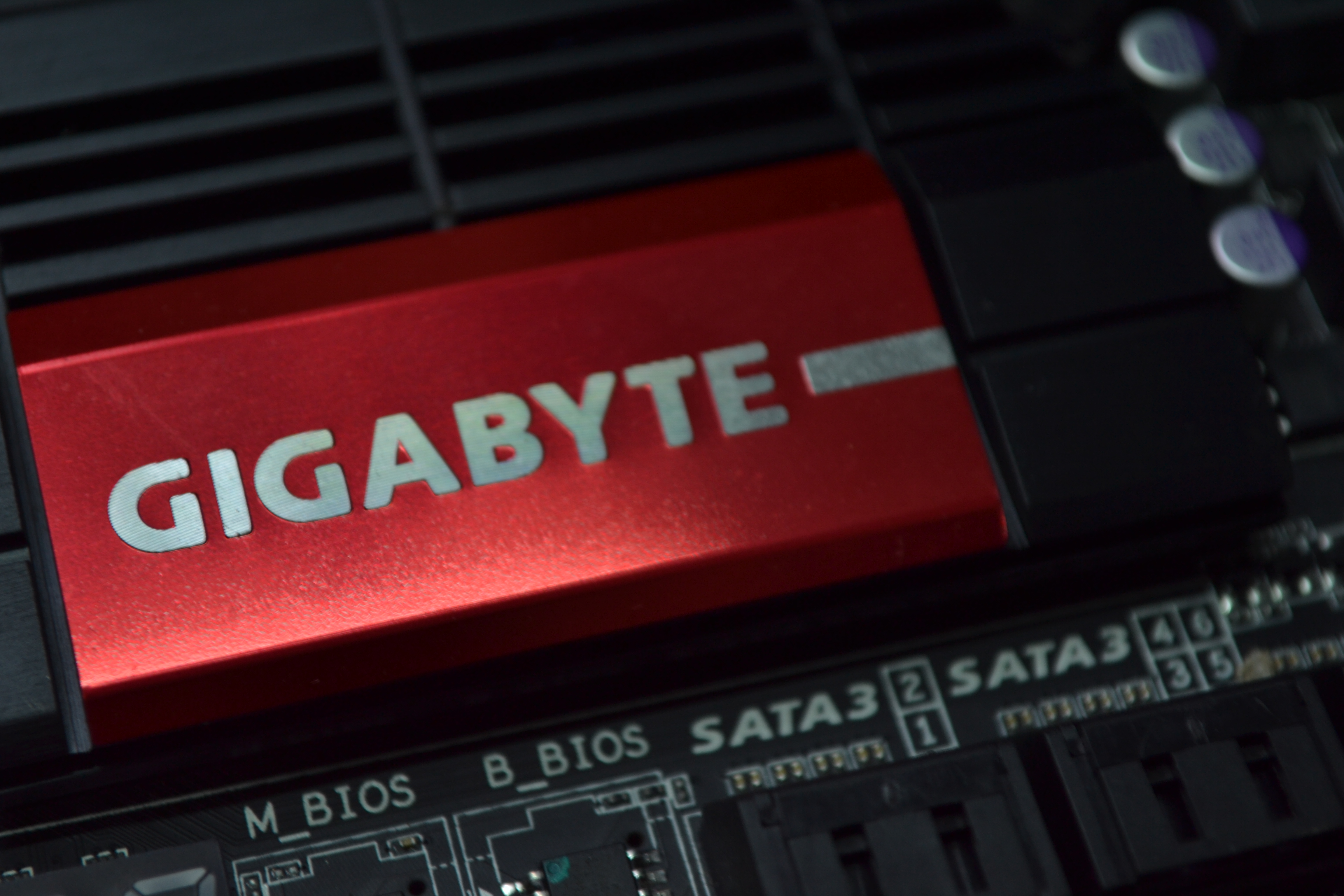 Sometimes, surfing through a huge review may not be what someone is looking for. At times, you just want jump into the performance numbers to compare the hardware component to what you have in mind or installed in your system. Keeping those people in mind, we are introducing a new series called Test Report – where we will give you brief descriptions about a product before jumping into test results. Think of this as an extended preview with test data thrown into the mix to give you a fair idea of what to expect, paving the way for a full review in future if situation permits.

We are taking baby steps to push out as many quality and detailed preview/reviews as we can as quick as possible. The TechArx Tech Report is one such little step.

If you see AMD’s processor lineup and the boards available in the market for them, there is a clear contrast between APUs and CPUs. The boards catering to AMD CPUs (the Athlon/Phenom/FX series) are a mixture of different form factors, while those associated with the APUs are predominantly micro-ATX, with a few full size ATX motherboards and one or two mini-ITX boards thrown into the mix. The clear indication that even the motherboard manufacturers aren’t sure enough about the usage of an APU outside small-form-factor machines is very evident. But as I stated, there are a few odd ones out in this stack.
We’re reviewing one today: the Gigabyte F2A88X-UP4, based on the FM2+ platform. 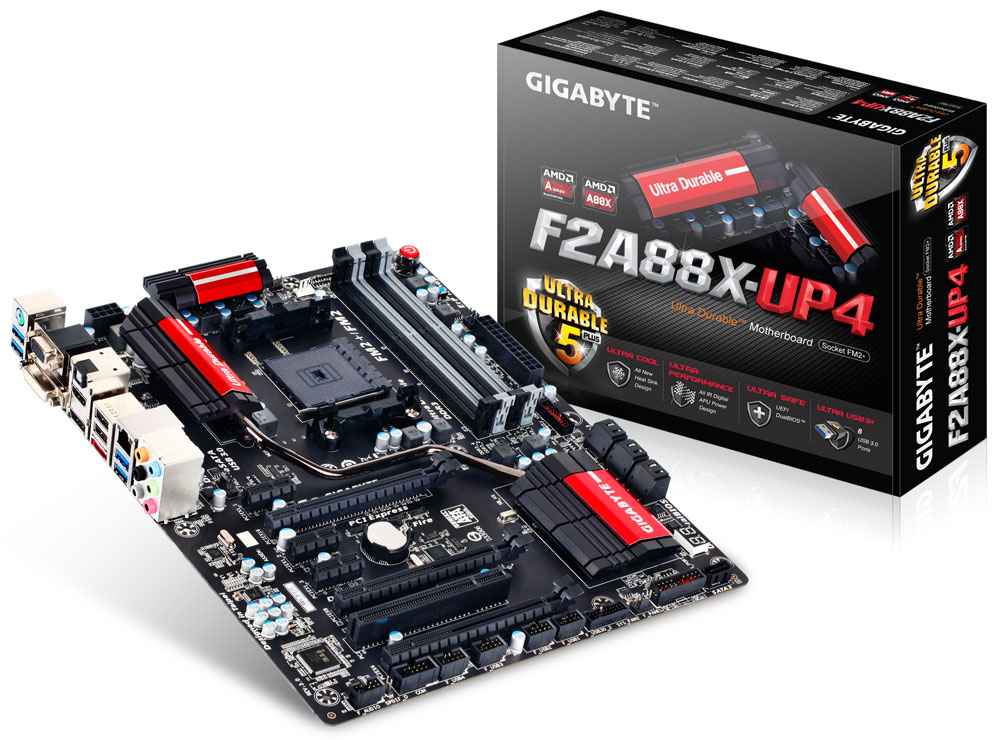 Based on the name itself, it is clear that the UP4 (henceforth in the review we’ll call the F2A88X-UP4 by this nickname) is a full-sized ATX board. It also belongs to Gigabyte’s latest iteration of ‘Ultra Durable’ series (Ultra Durable 5 plus), meaning a newer heatsink design, and a beefier VRM componentry with exclusive use of PowIRstage ICs from International Rectifier for 100% digital power delivery. While this is a good thing from Gigabyte’s part, the usage of such high-end power delivery/PWM components for a value platform as FM2+ almost feels overengineered, though one may say this is in response to the initial reports of high temperatures of the power delivery components of motherboards when FM2+ released as a platform.

As part of their Ultra Durable package, Gigabyte includes dualBIOS for AMD. For other features of the UP4, let’s look at the motherboard in detail. 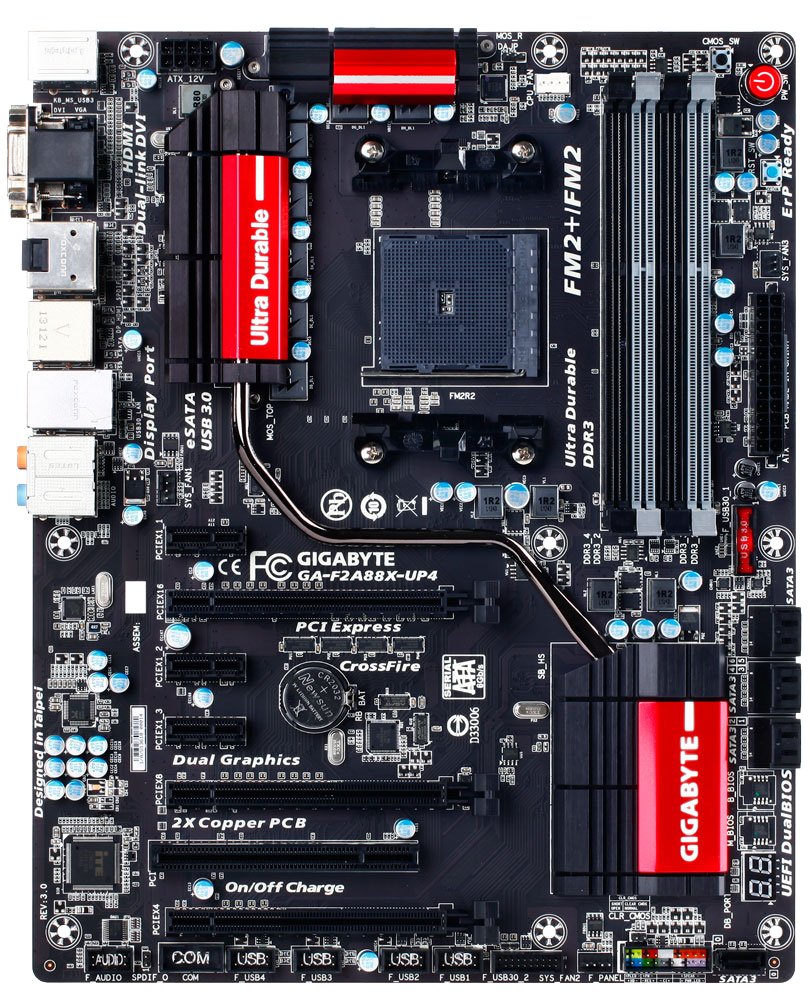 The motherboard retains Gigabyte’s color scheme for their consumer range as introduced with the Intel 8-series, and is a mixture of red and black. The motherboard is matte black with black/red strips on the VRM and chipset heatsinks. The red bits usually work as a background for words ‘Gigabyte’ and ‘Ultra Durable’, but as a whole the aesthetics is on the pleasing side.

The VRM and Chipset heatsinks are connected through a metal heatpipe. Since this motherboard is Gigabyte’s Ultra Durable 5+ rated, the VRM assembly uses 60A black chokes (8 phase power delivery in UP4), paired with International Rectifier IR355x ICs rated at 40A/60A. The UD5+ moniker also extends to USB ports available and Heatsink design among other things.

Starting with the CPU socket area, we see that it is relatively clutter free without any lone capacitor sticking out in the middle. There are 4 color coded DRAM slots supporting up to 64 GB of DDR3 RAM with frequencies of up to 2400 MHz. A single white fan header (CPU_FAN) is placed between the DRAM slots and the rightmost extension of the VRM Heatsink, while the 8-pin ATX 12v connector sits on the top left hand side of the motherboard between the VRM Heatsink and I/O.

The right hand corner of the motherboard houses the POWER and CMOS RESET switches. 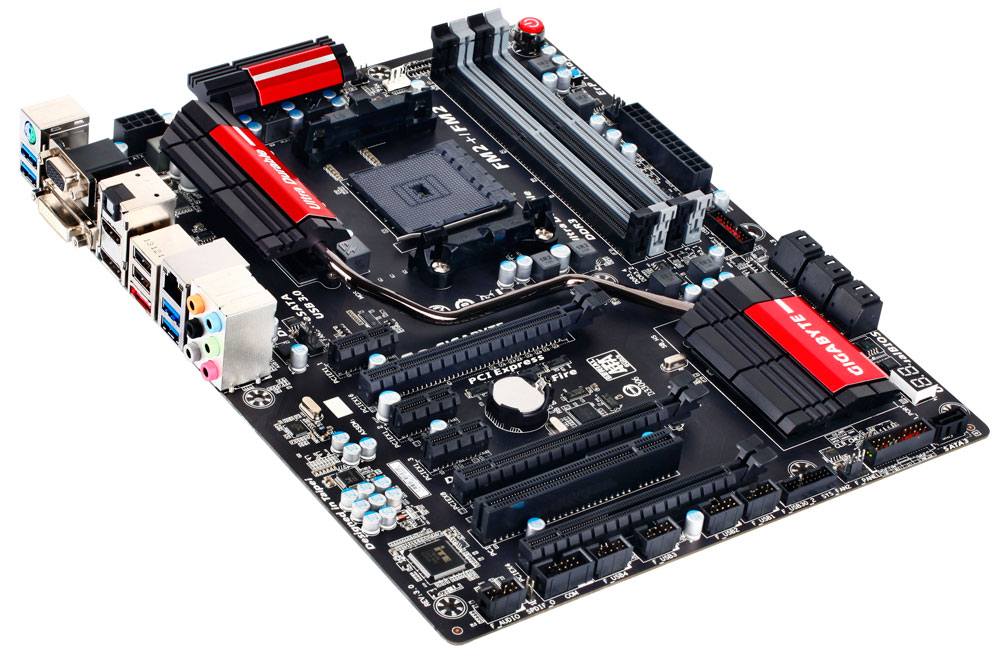 Under the Heatsink are the power delivery components. Since this is their Ultra Durable 5+ certified motherboard, GIGABYTE uses IR3567A, a dual output 6+2 phase PWM controller, and IR3550M MOSFET driver. The 3550M is a server grade 60A Integrated PowIRstage® driver, which again design wise looks to be overkill for FM2+ platform. These are paired with stylized shiny black chokes which are also rated 60A. This combination is significantly better than what is available in most boards and should allow for a cleaner power delivery as well as more OC headroom and stability.

The 24 pin ATX power connector and the USB 3.0 internal headers are on the right hand side of the DRAM slots in their usual positions. Coming further down, we see the regular sized Chipset Heatsink which is connected with the VRM Heatsink by a metal heatpipe. On the right hand side of the Heatsink are storage connectors and a two digit LED debug display. Between the debug display and the SATA ports we also see two soldered BIOS chips which enable this board’s dualBIOS capability.

There are a total of seven SATA 6 Gbps ports available in the UP4, and six of them are stacked on two rows in their usual positions while a lone port is on the lower right hand corner of the motherboard.

For expansion, we see three PCIe2.0 x1 slots, as well as three PCIe3.0 x16 slots and a single PCI slot. The point to remember here that the PCIe x16 slots operate at x16/x8/x4 respectively and in dual card configuration the first PCIe x16 slot operates at x8. There’s no support for NVidia SLI since this is the FM2+ platform we’re talking about here, and ideally the slot spacing in the UP4 is enough for two triple-slot GPUs. For CrossFire configurations users can use an x8/x8 layout with a third GPU in the PCIe 2.0 x4 slot at the bottom, however this is routed through the chipset and will not guarantee perfect scaling. The lack of additional power connectors mean that the third GPU has serious possibilities of being starved of power and may not operate at x4 at all.ASMedia ASM1480 PCI-E Switching Chips are being used in this board.

The audio solution is provided by Realtek ALC892 and the networking duties are covered by a Realtek RTL8111F LAN Controller. There are no fancy audio features on board here, and the now-common audio PCB separation with the path lit by LEDs is missing as well.

The I/O has a PS/2 port which can take keyboards or mice, two USB2.0 ports from the A88X chipset and USB3.0 ports powered by VIA Labs VL805-Q6 USB 3.0 Controller, one each for D-Sub, DVI-D, HDMI, and Displayport video output options, GbE LAN port, and the audio connectors plus S/PDIF optical out connector. There’s an eSATA connector as well.The SuperIO Controller used here is an ITE8620E. 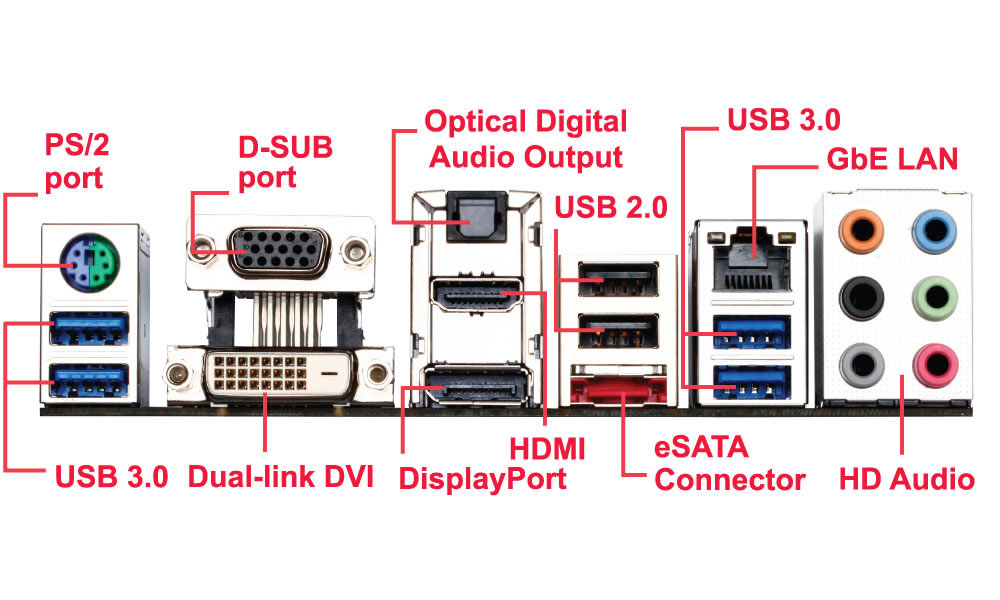 Since GIGABYTE for some strange reason has chosen to drive all the rear I/O USB3.0 ports via an external connector, these ports cannot be used for functions like OS installation. That is something a user needs to keep in mind while opting for this board or during the entire new OS install/formatting procedure.

As for fan headers, there are a total of four. The CPU_FAN is between the top VRM Heatsink and the first DRAM slot, the SYS_FAN1 is on the top hand side of the first PCIe x1 slot, SYS_FAN2 is on the bottom section of the motherboard, and SYS_FAN3 is beside the 24 pin ATX power connector. Again, this sort of placement means some creative cable management will be required in case of a 240mm CLC installation and hooking the pump/fan cables to the motherboard, but since this is a budget platform we can overlook this altogether. Another point to make here is that the SYS_FAN3 is 3 pin, while the rest of the fan connectors are standard 4 pin.

Now that we know out way around the board, lets take a look at some benchmark numbers,shall we?

First Up is AIDA CPU Suite: 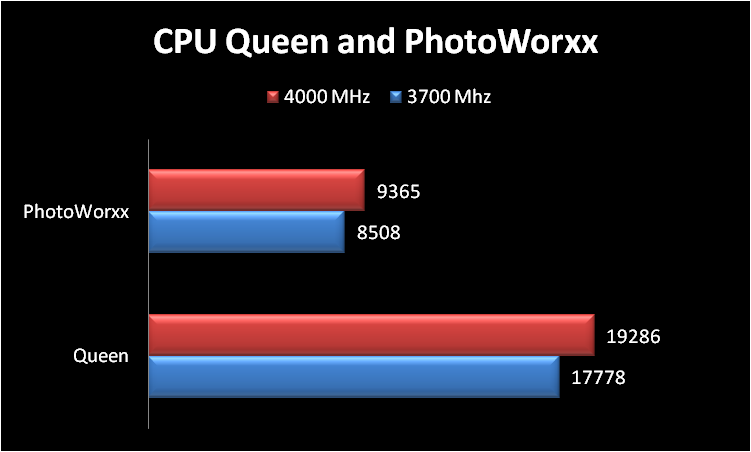 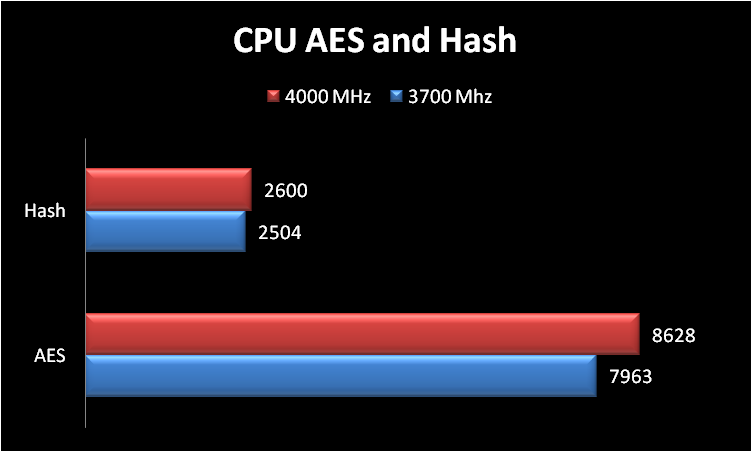 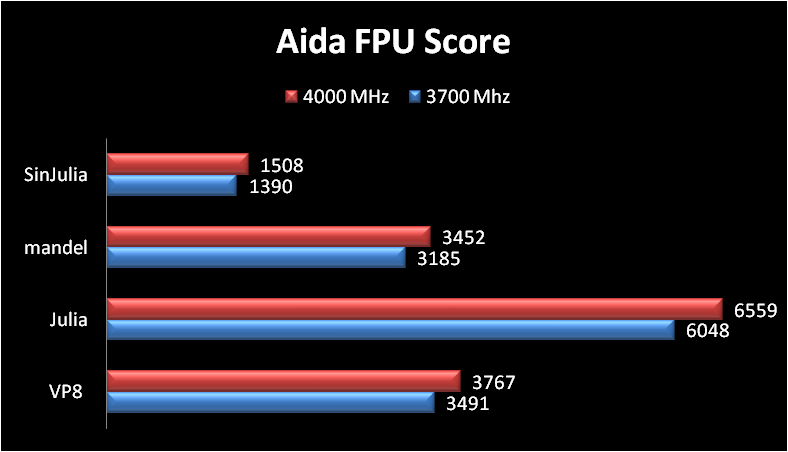 Sadly we lost quite a bit of data in a recent storage system crash so couldn’t attach all scores.
If we get a chance to rerun these test in future we will modify the review to include new scores.

The F2A88X-UP4 is an interesting board. The build quality is quite up to the mark as one would expect form an Board with “Ultra Durable” moniker.However the fan port placement could do with some restructuring as already pointed out earlier.On the Software and UEFI side though: the board comes up less than satisfactory. The UEFI feels laggy at times even with a keyboard and the bundled software feels too primitive if we compare it with gigabytes Intel lineup and its obvious competition:the Cross Blade Ranger from Asus.

My suggestion to Gigabyte would be to devote a bit more time to the software side of things and make it at least at par with tools like the AMD Overdrive and such.If one is looking for a board without the intention of overclocking then by all means get this board.Overall the F2A88X-UP4 a good board hardware wise,limited by lackluster software support and a laggy UEFI(at least on the sample we used).