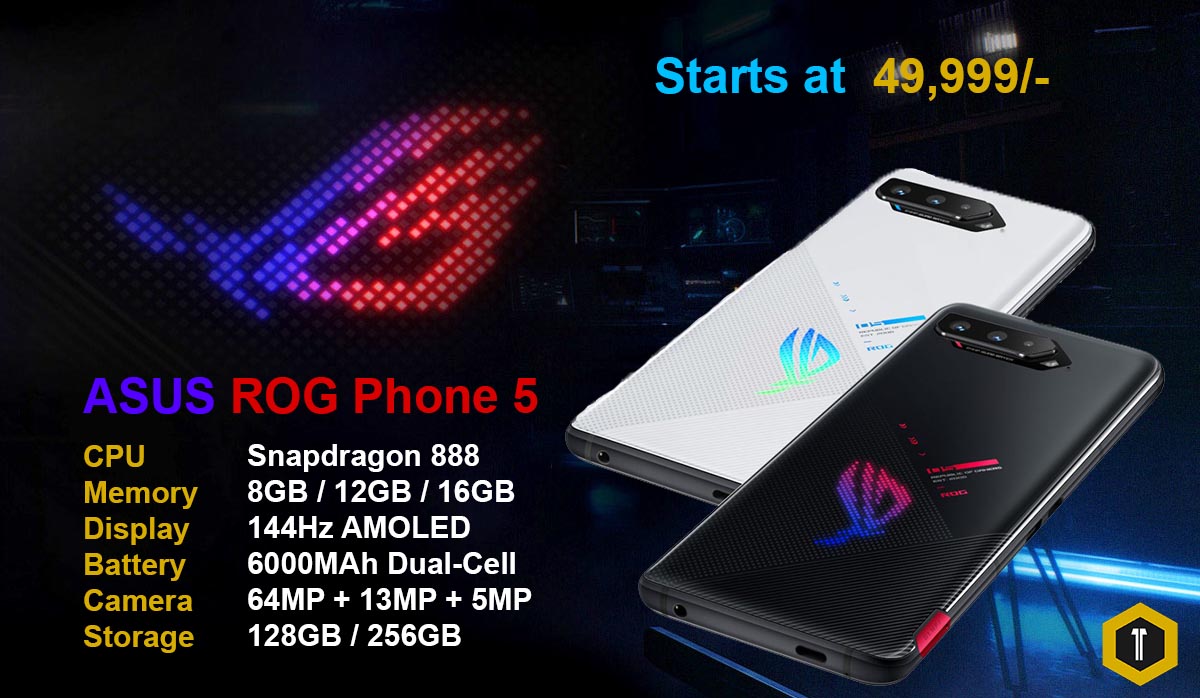 ASUS just launched their ROG Phone 5, they skipped using number 4 due to some reasons as mentioned in our previous post. The ASUS ROG Phone 5 is surely an overkill phone with powerful specs like how the ROG phones are.

The ROG phone 5 is powered by Snapdragon 888 with 8GB / 12GB of RAM, the global version comes with 16GB of RAM, and The ROG Phone 5 Ultimate has 18GB of 3200MHz RAM. For steady performance and no thermal throttling the phone has a reshaped vapor chamber and extensive graphite sheets to keep itself under decent temperatures, this cooling solution is even better than the ROG Phone 3 as claimed by ASUS.

For even better cooling performance the ASUS ROG AeroActive Cooler 5 accessory can be used. The external cooler fits right above the CPU and doesn’t produce much noise. The ROG AeroActive Cooler 5 delivers up to a 15°C drop on the back surface and a 10°C drop in CPU temperature without any external power needed. It also adds two physical AirTrigger buttons, a kickstand, and a 3.5mm headphone jack, so you can charge the phone while using standard 3.5mm headphones without any cables getting in the way.

The ROG phone 5 has some incredible display specs for a gaming phone. The 6.78-inch, 20.4:9 aspect ratio 2440×1080p, AMOLED, 10-bit HDR display comes with not only a 144Hz refresh rate but also a 1MS GTG response time, making it an incredible pro gaming grade display. For keeping up with such a fast output the display also has a 300Hz touch sampling rate which brings some impressive 24.3MS low latency inputs which will surely benefit conscious gamers. The display also has a 111% DCI-P3 color gamut and 1,000,000:1 contrast ratio. The marvelous display is protected by Gorilla Glass Victus and has an in-display fingerprint scanner. There are still bezels on the top so your fingers don’t end up covering the screen during gameplay.

The ASUS ROG Phone 5 comes with similar cameras to the ASUS Zenphone 7 Pro. ASUS decided to stick with the setup as the Zenphone 7 Pro had won the MKBHD blind camera test competition. That means it’s the same Sony IMX686 64MP f/1.8 main camera with a 13MP f/2.4 ultrawide and 5MP macro sensor. The phone supports recording 8K at 30fps, 4K at 120fps, 1080p at 240fps and, 720p at 480fps; also there is EIS for stable videos. The selfie camera is also a similar 24MP with a fixed-focus f/2.45 lens.

The Zenphone 7 Pro was able to win against iPhone 12 Pro Max, Galaxy Note 20 Ultra, Mi 10 Ultra, Xperia 1 ii, Oneplus 8T and, the Pixel 4a. All the competitors were super premium flagships from their respective brands, in such a case, we can expect the ROG Phone 5 to have an incredibly great camera as well.

ASUS decided not to ignore the 3.5 mm headphone jack, and also enhanced it greatly with an ESS Sabre ES9280AC Pro Quad DAC. The Class G amp automatically detects the impedance of your headphones and switches to the appropriate mode so feel free to plug in your high-end audiophile headphones to enjoy some decent music, or just enjoy more accurate imaging and greater sound quality for competitive or enjoyable gameplay alike. If you already have invested in a great Bluetooth headset instead, aptX Adaptive, LDAC, and AAC codecs are supported to give you no compromises in that regard.

For a phone, good speakers are also quite important and for the front-firing stereo speakers, the ROG phone 5 powers it with dual Cirrus Logic CS35L45 amps, each of which can deliver 21% more power to its speaker than the previous ROG phone 3, so you can enjoy great audio without headsets.

The ROG Phone 5 comes in Pro and Ultimate versions. They come bundled with the AeroActive Cooler 5, AirTrigger 5 ultrasonic buttons. But the highlight is the PM-OLED display at the back which displays customizable graphics for incoming calls, during charging, or while a game is loading. Asus calls this display tech ROG Vision. Asus ROG 5 Ultimate has the highest 18GB of RAM clocked at 3200Mhz and 512GB of storage.