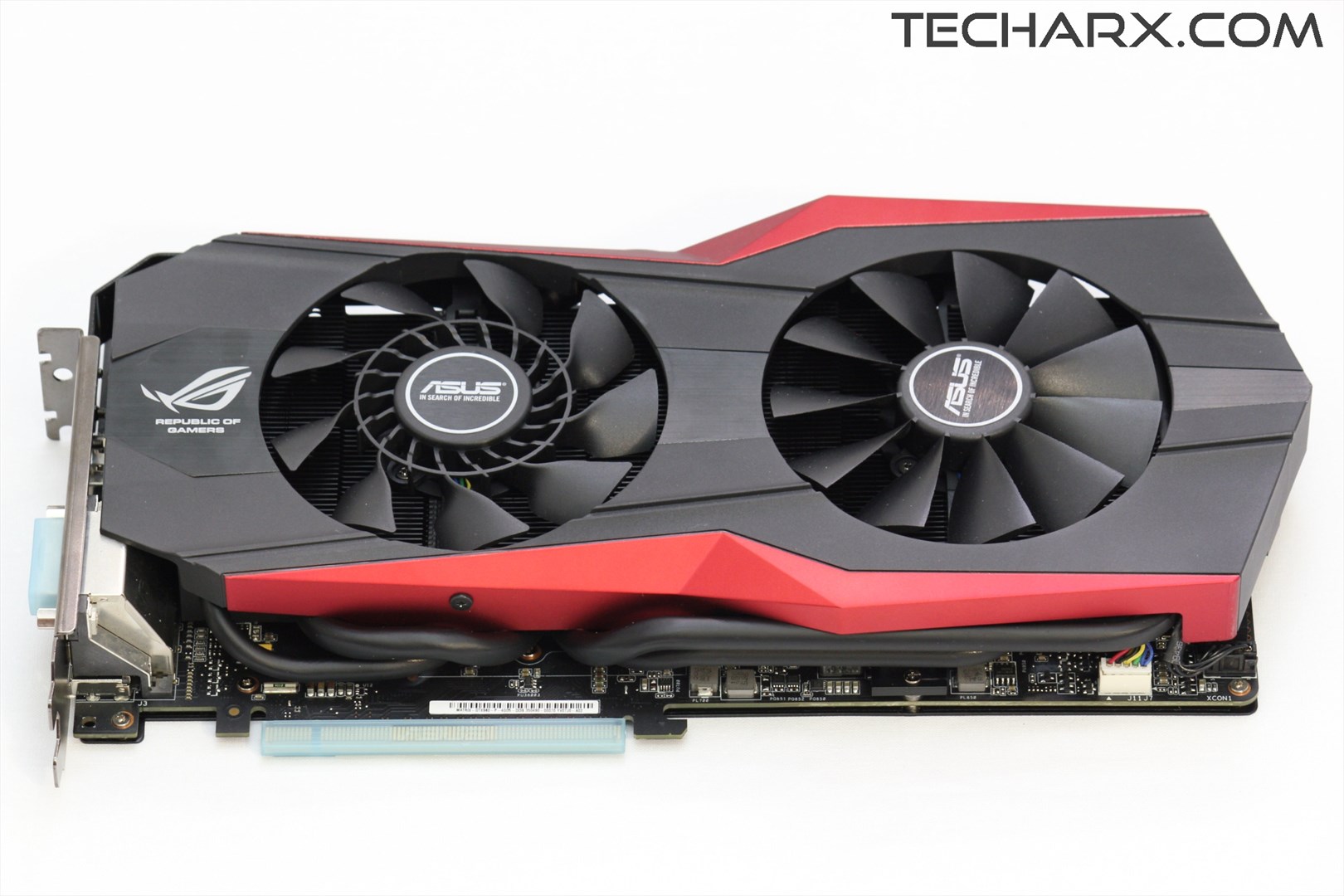 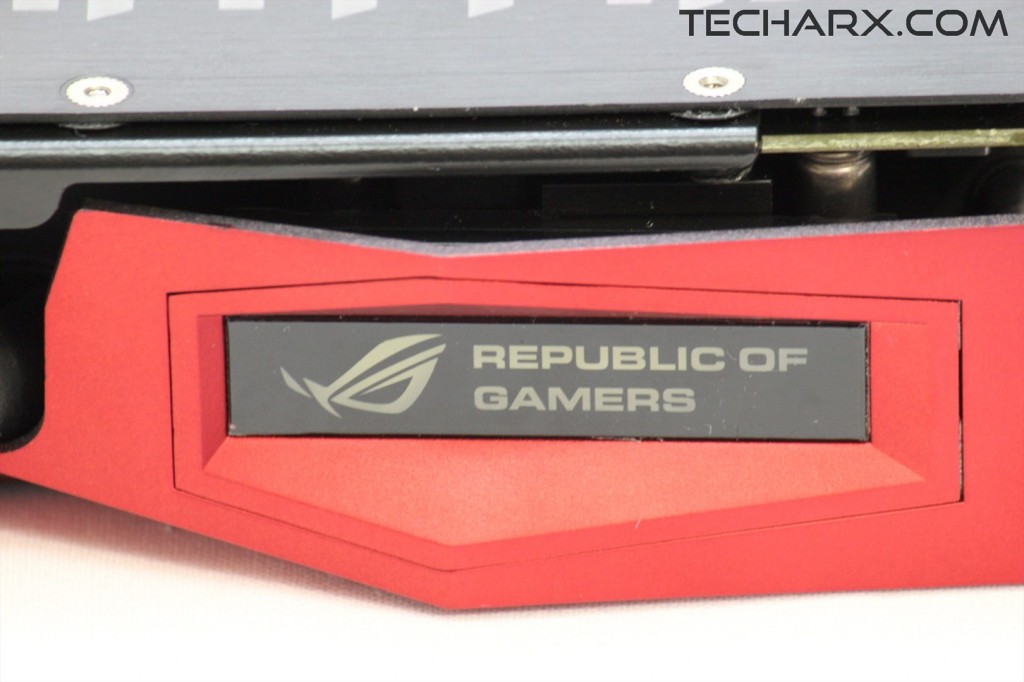 Hello All,
Welcome to the second part of the ASUS ROG Matrix GTX 980 Platinum Review .

In this part we will cover the gaming performance of the ROG Matrix GTX 980 Platinum under stock and overclocked conditions.

Since this is a part of a bigger series I suggest you check out Unboxing and overclocking review .

As already illustrated here the ROG Matrix GTX 980 Platinum with its 14 Phase VRM and a good software to compliment it in form of  GPU Tweak begs to be overclocked.And we happily obliged!

Anything above this was not stable for benchmarking purpose so we didn’t push further.
Now lets move over to the benchmark numbers.

Note: The main graphs will consist of average FPS and i will include two big graphs at the end if anyone wants to check out the minimum FPS.
Also Stock =1241MHz/1342MHz/1753MHz(core/boost/mem)
and Overclock = 1399MHz/1500MHz/2000MHz(core/boost/mem)

BioShock Infinite is a first-person shooter video game developed by Irrational Games, and published by 2K Games. based on the UNREAL Engine 3 the game is set in 1912 during the growth of American exceptionalism, the game has protagonist, former Pinkerton agent Booker DeWitt, sent to the floating air-city of Columbia to find a young woman, Elizabeth, who has been held captive there for most of her life. Though Booker rescues Elizabeth, the two are pursued by the city’s warring factions: the nativist and élite Founders that strive to keep the city for pure Americans, and the Vox Populi, rebels representing the common people. Booker finds Elizabeth to be central to this conflict, and learns that she possesses strange powers to manipulate rifts in the space-time continuum that ravage Columbia 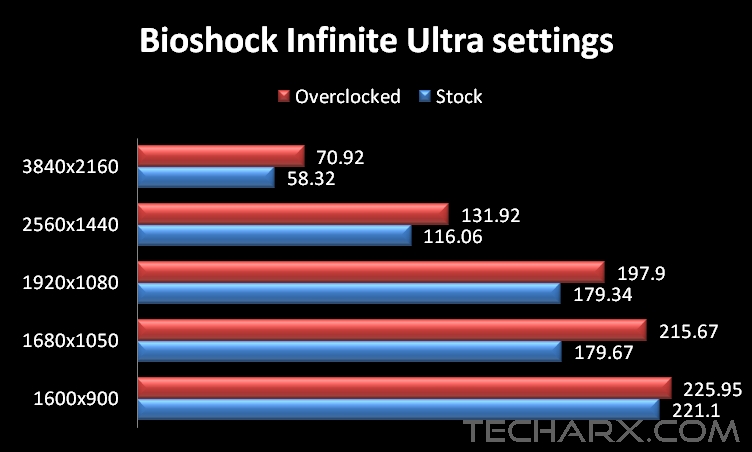 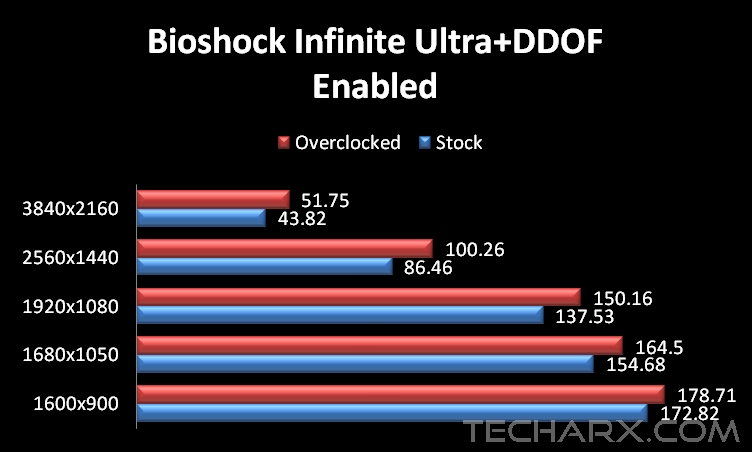 As expected the card performs pretty well in Bioshock.One thing to note here is how beautifully the game scales with overclock gaining as much as 14FPS (15%)at times.

Tomb Raider is an action-adventure video game. Published by Square Enix, Tomb Raider is the fifth title developed by Crystal Dynamics in the Tomb Raider franchise. As the first entry in a new Tomb Raider continuity, the game is a reboot that emphasizes the reconstructed origins of the culturally influential lead character Lara Croft. 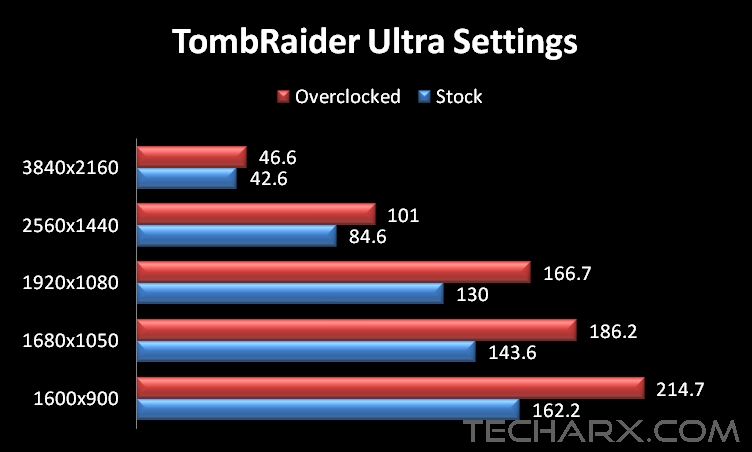 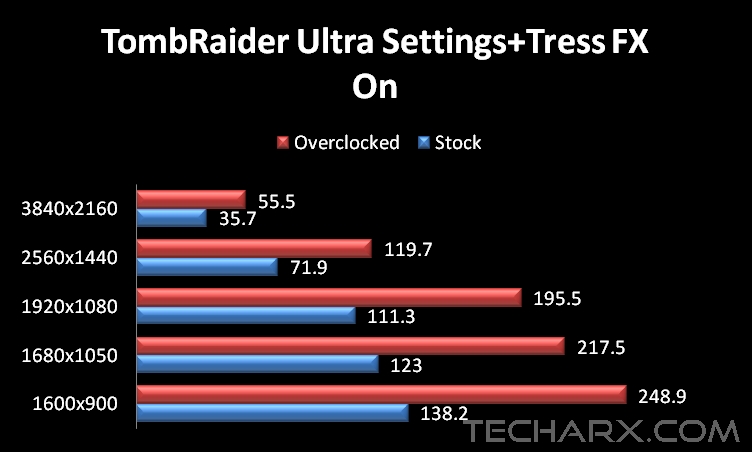 The card absolutely blasts through the Tomb raider benchmark showing it full power,only to be slowed down by the 4K textures.

Hitman: Absolution (HMA) is an action-adventure stealth game developed by IO Interactive and published by Square Enix.It is the fifth entry in the Hitman game series, and runs on IO Interactive’s proprietary Glacier 2 game engine.

One of the key points in this game is the lighting and its ability to render upto 1200 NPC at a time. 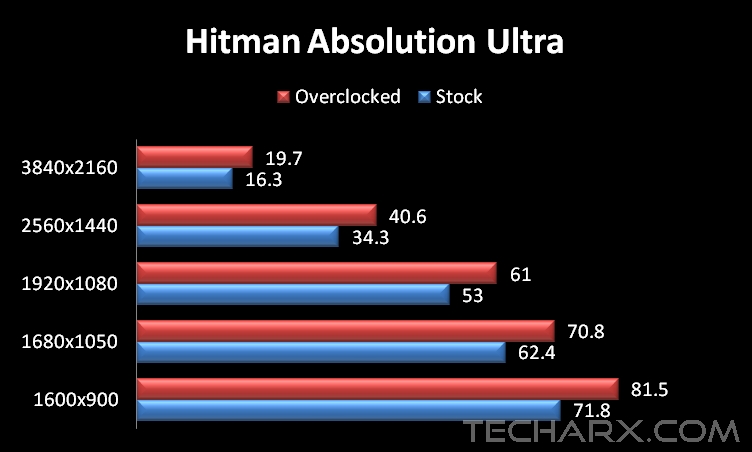 Hitman Absolution even though being a so called AMD biased card runs pretty well with Nvidia.Only after the 1080P barrier is breached the card slows down a bit in my opinion as more and more Vram buffer is needed to load all those eye-candy.

This seems to be the case with almost all the visually engaging games barring a few like Bioshock Infinite. Once you breach the 1080P barrier (or 1440P in some case) the need for more vram shows quite distinctively. 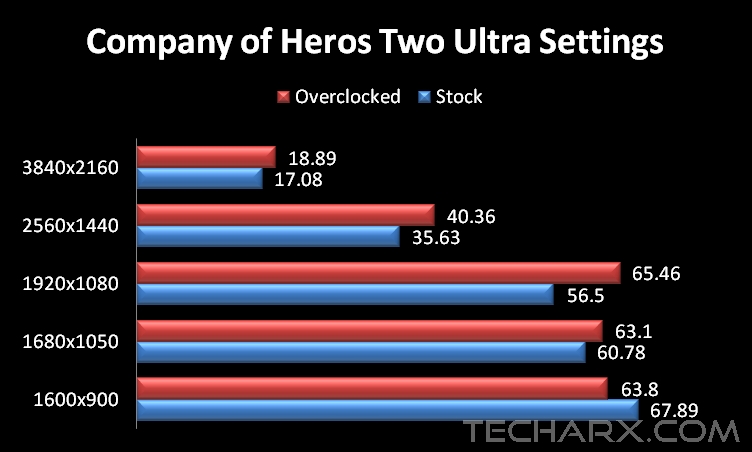 Company of Heroes seems to be pretty hard on any Graphics card with the GTX 980 being no exception.If you want to play this game in 1440P or up with 60 Frames to spare then running two of these is suggested or a toing down in settings are in order.

Middle-earth: Shadow of Mordor is an action role-playing video game set within Tolkien’s legendarium, developed by Monolith Productions and published by Warner Bros. Interactive Entertainment.The story of the game takes place between the events of The Hobbit and The Lord of the Rings. It was released for Microsoft Windows, PlayStation 4, and Xbox One in September 2014 and released for PlayStation 3 and Xbox 360 in November 2014.The game runs on
LithTech Jupiter EX Engine(modified with Nemesis System). 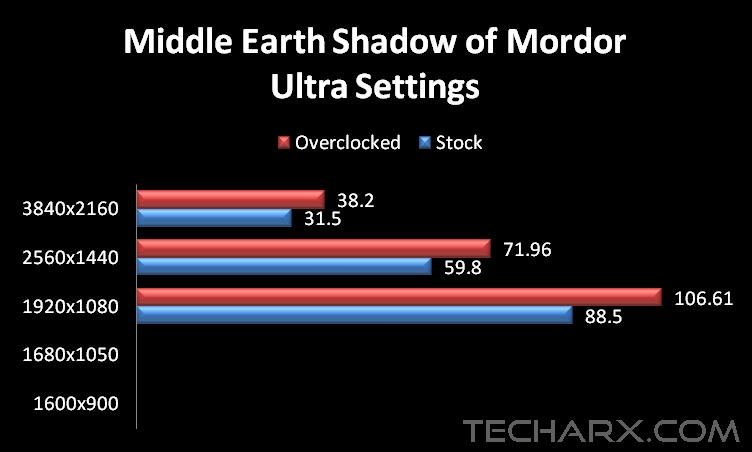 Note due to some limitation within the game engine as regards to the monitor aspect ratio  we couldn’t run the test at 1600×900 and 1680×1050 resolution.

Being an Nvidia TWIMTB(The Way It’s Meant to be Played) title i expected the game to be optimized to play nice in Nvidia’s favor and it doesn’t disappoint.Even at 4K resolution the game runs at slightly over 30FPS(however slight the difference maybe)however to get a proper experience i would suggest running an SLI.

It’s a first-person shooter video game with survival horror elements, based on the novel Metro 2033 by Russian author Dmitry Glukhovsky. It was developed by 4A Games in Ukraine and released in March 2010. The game is played from the perspective of Artyom, the player-character. The story takes place in post-apocalyptic Moscow. The game uses 4A Engine which supports Direct3D APIs 9, 10, and 11, along with NVidia’s PhysX and also NVidia’s 3D Vision. 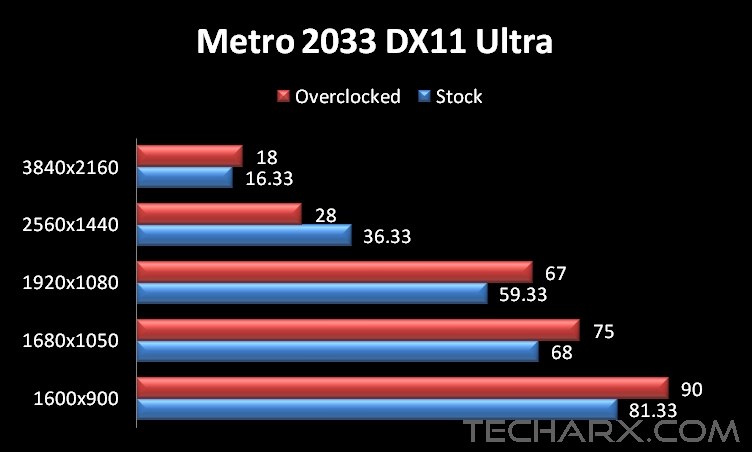 Metro 2033 is another TWIMTB(The Way It’s Meant to be Played) title however as always the case been its brutal on any Graphics card since it release. So while 1080P seems to be a walk in the park for the card it begins to slow down a bit once the resolution crosses towards the 1440P category.

Overall we see the GTX 980 will eat pretty much anything thrown at it upto 1440P.After 1440P however it will slow down in visually engaging games,so if you plan to run a heavily modded version of Skyrim or Crysis 3 in all its glory or Battlefield 4 Multiplayer in 4K expect slowdown and don’t tell me i didn’t warn you!

GTX 980 in itself is a very capable card and coupled with Asus’s legendary RnD and engineering what we have with us today is a legend in its own right. Whatever the critics might say an overclock 1500MHZ on Core and 2000Mhz on memory on Air is no mean feat and this card has done it.

Hats off Asus! This humble reviewer felt like he was back to the S775 or S1155 first gen days when overclocking was fun.