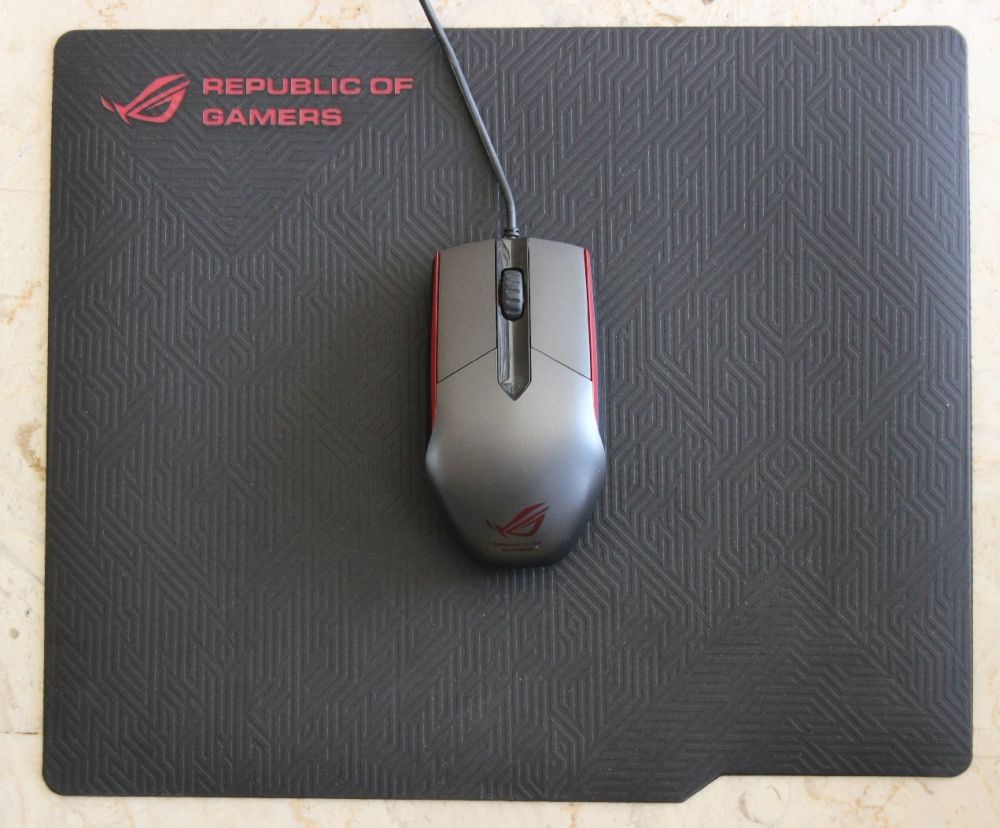 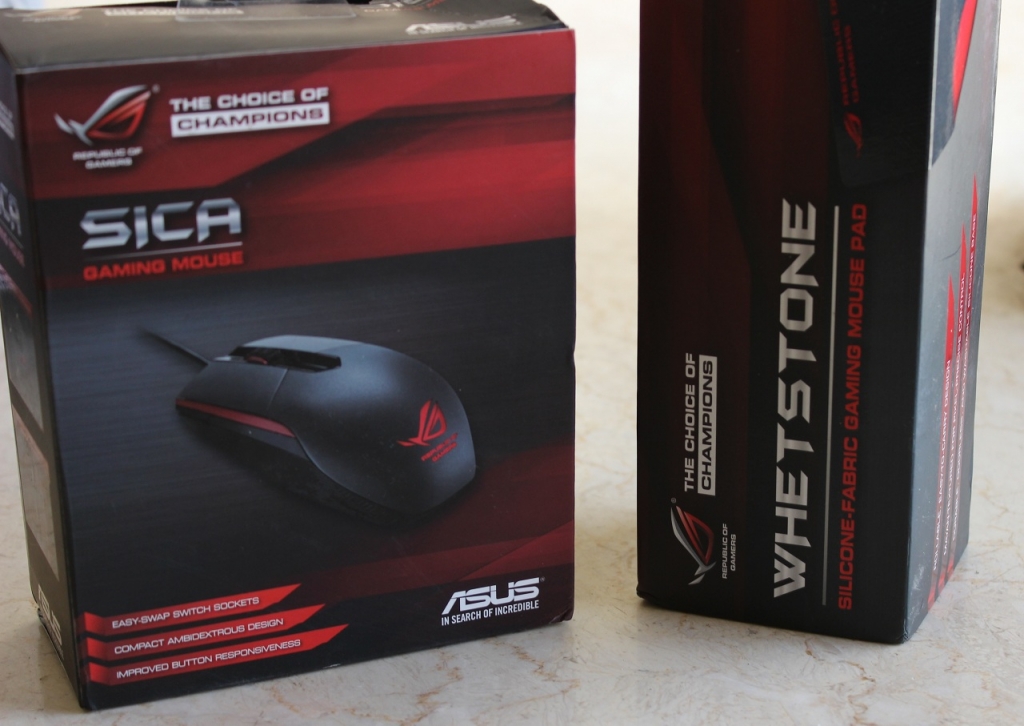 The logo employed by the Republic of Gamers, that of a Red Eye is often synonymous with products that exude quality and are a “tad” bit pricey. Originally limited to Motherboards and GPU’s, Republic of Gamers as a brand has since expanded into the world of gaming peripherals. We took a look at their mid-end offering in the mouse department, the Claw and the Goliathus slayer, Glide here. Their entry level mouse, the Sica, was unveiled at CES 2015 as part of their new lineup of mice: The Spatha and the Sica. The Spatha was targeted more towards MMO players with its multitude of side buttons the Sica is more bare bones. It provides the bare necessities that people look for in a mouse with a few frills attached. Another big reveal at CES 2015 was the Whetstone mouse pad. This premium pad is set to compete with the likes of the Destructor with its silicone base and “Mayan inspired” texture. We at TechArx have managed to get our hands on both of these products. Let’s take a look at them shall we? 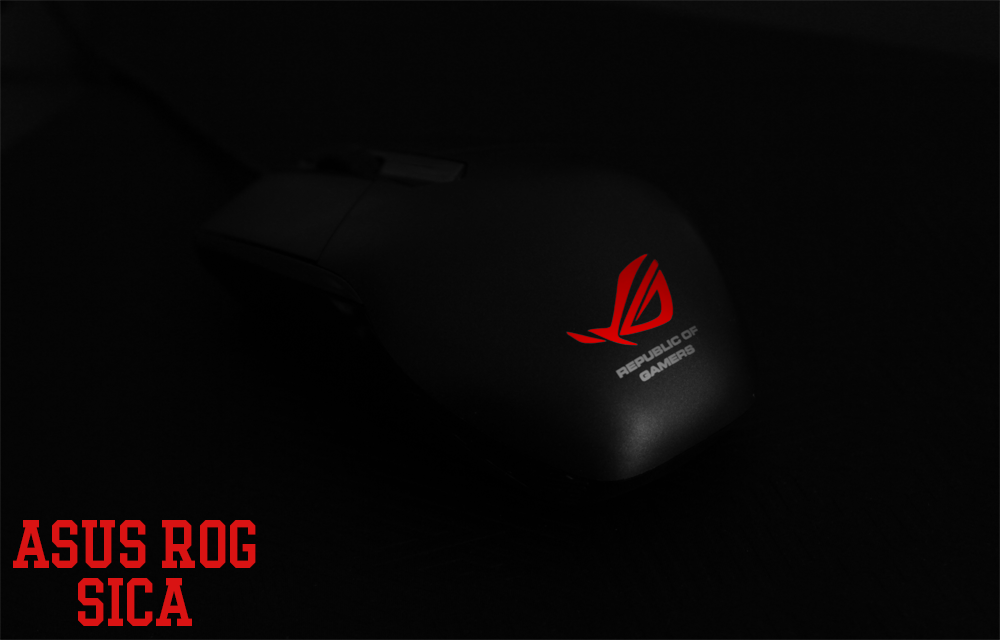 The Asus Sica is found nestled in its plastic cocoon safe from any harm. The packaging is well done and securely holds the mouse as it should. The features advertised on the box include 5000DPI sensor and the ability to change out your mouse switches in case you encounter the dreaded double clicking issue or are just that much of an enthusiast that you swap out your Omron D2F’s for D2FC’s. Included with the mouse is a driver CD and that’s about it. Considering the stripped down nature of the mouse this is completely understandable. Taking it out of the plastic shell we’re greeted by the sight of the Republic of Gamers Sica. 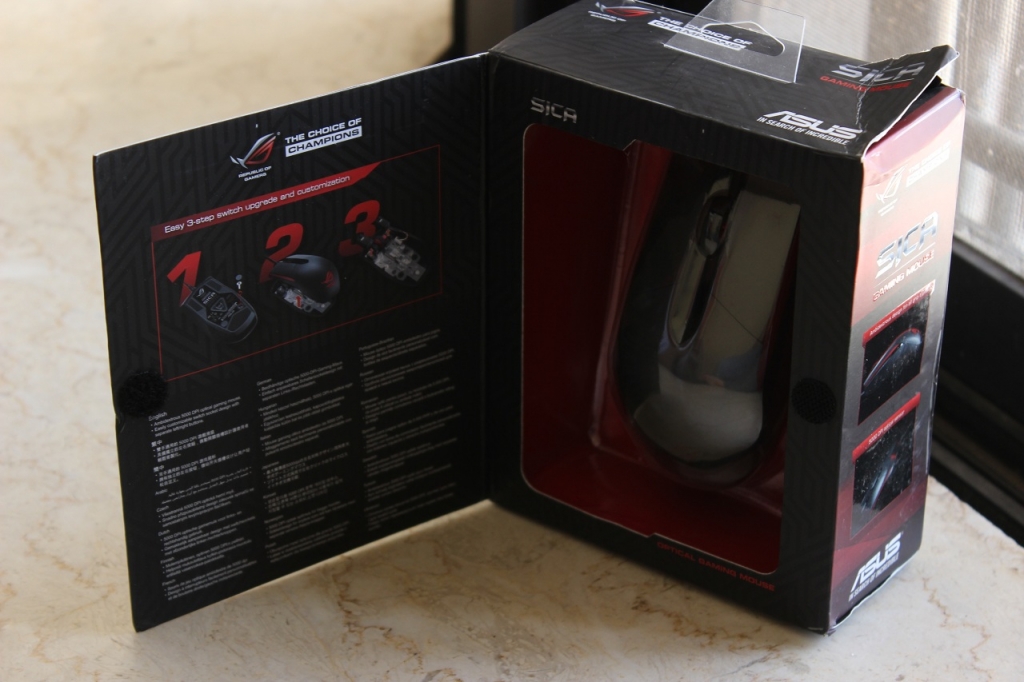 The mouse is demure in its looks. There is a “Mayan inspired” pattern on near the back of the mouse and it doesn’t exactly offer any utility apart from maybe aesthetic appeal. The Red accents are present in compliance with the RoG theme of black and red. The mouse does have a ROG logo on the back that gently pulses which adds a touch of subtlety to an otherwise mediocre looking mouse. 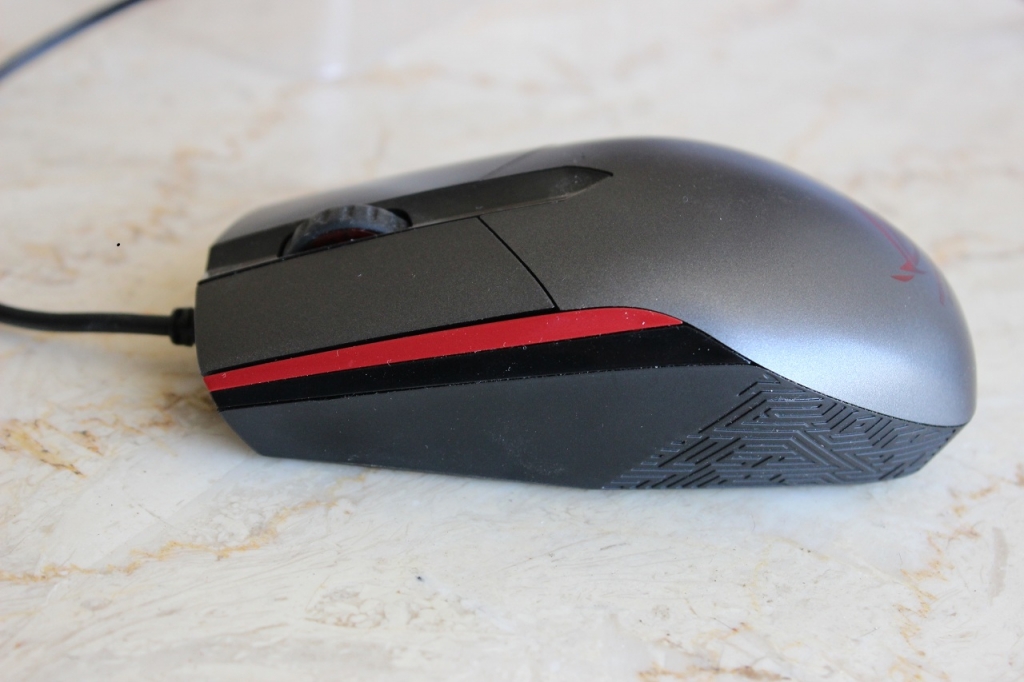 The mouse lacks any grooves on the side to rest your fingers and this makes it somewhat a pain to hold especially when using palm grip. The lack of grooves however might be construed as a feature since this mouse is marketed as ambidextrous. There are also no side buttons to speak of, the buttons that are present however are responsive and don’t require too much force to actuate which is good. 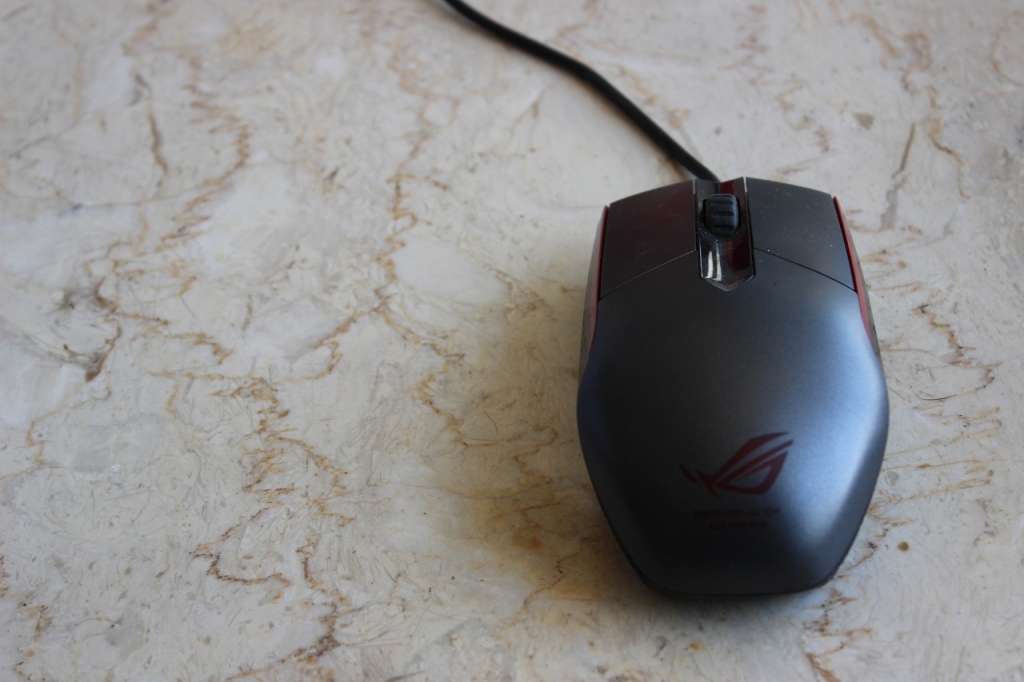 The lack of on the fly DPI change button is slightly surprising. Granted nobody really switches DPI on the fly but it is a question of convenience as changing DPI becomes a process of installing the ROG trademarked Armory software and using the slider inside it. 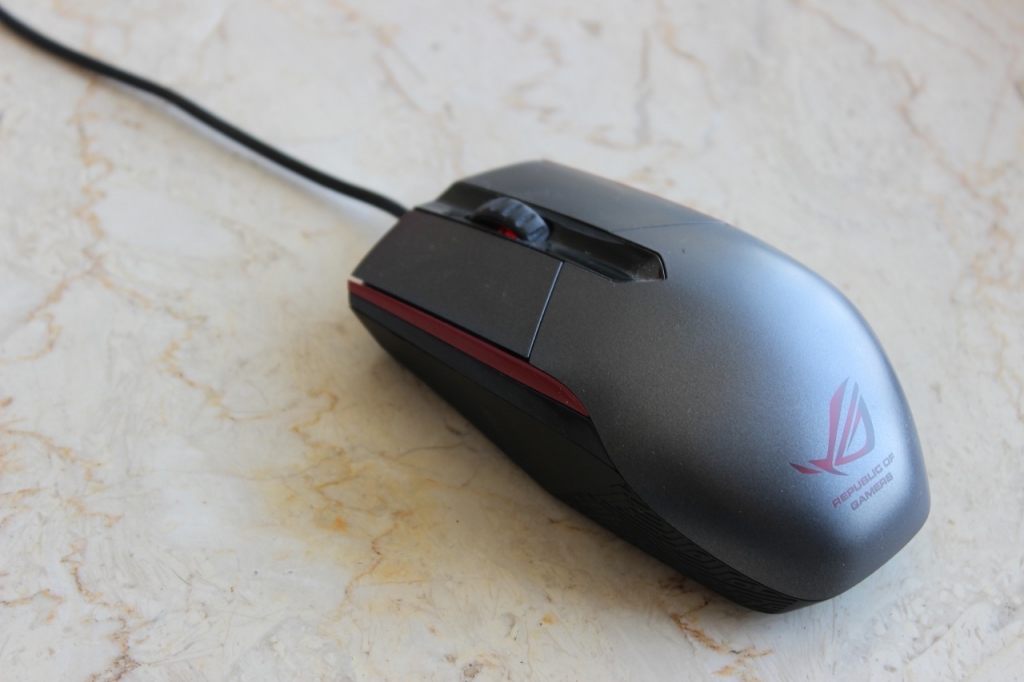 The mouse was responsive when used on the Whetstone and on the Goliathus. The buttons were responsive when used and there was little to no acceleration in the mouse sensor. Is it a good sensor? Definitely. Is it a good mouse? Well, let’s take a look at the competition the Sica is going to face if it is released. The Razer Death Adder, The SteelSeries Kinzu, Logitech G400S, G402. All mice with side buttons, comfortable design and a DPI switching feature. So what does the Sica have going for it? Replaceable mouse switches? A set of 6 switches is available for Rs. 1000 on Amazon. Granted swapping out the switch in case of a malfunction does work out cheaper than buying a new mouse, but do you really want to use a mouse that has no side buttons or DPI changing feature? This mouse is more suited to be introduced as part of a bundle rather than a stand alone product right now as we do not see it fitting into any price bracket even as a niche buy. 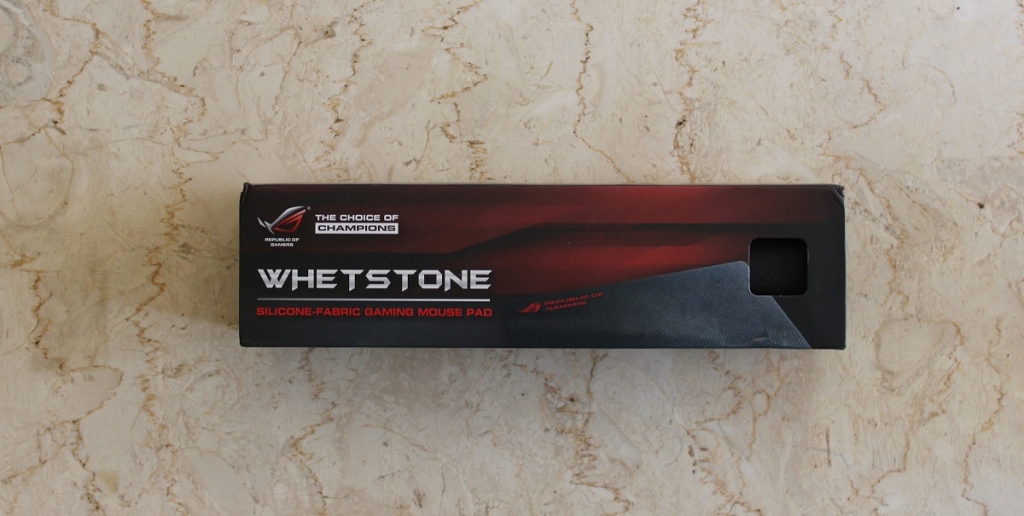 Asus had made some headway into the mouse pad department with their Glide Speed and Control editions but nothing quite like this. The Whetstone is Asus’ attempt at a high end mouse pad. The surface of the Whetstone is fabric bonded using an 8 stage bonding process so it doesn’t come flying off like the QcK Mass.

The base however is silicone and while it does also function as a dust magnet it does keep the pad anchored at its spot and the contrast of the red base to the grey of the pad is aesthetically pleasing. 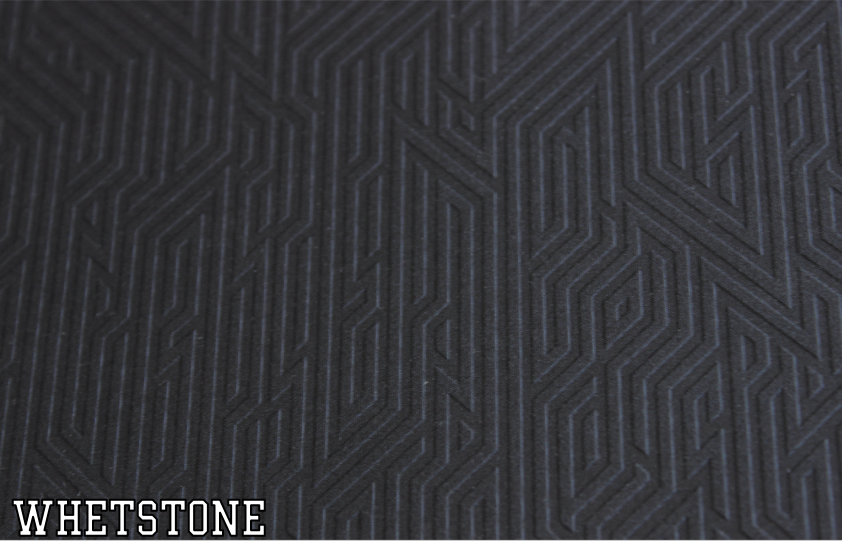 The pattern on the mouse pad is “Mayan inspired” similar to the back of the Sica. However, the texture isn’t just there as an eye pleaser it offers some resistance while moving the mouse across thereby lending itself to the design on the mousepad.

The pad measures 320 x 270 x 2mm and weighs around 208g. A bit heavier than your average cloth pad but that’s what gives it the premium feel. It was a joy to use along with the Sica and my own mouse. Considering the dimensions are just numbers to the average user we decided to put in a picture of the mousepad along with the mouse, just to give you guys an idea. 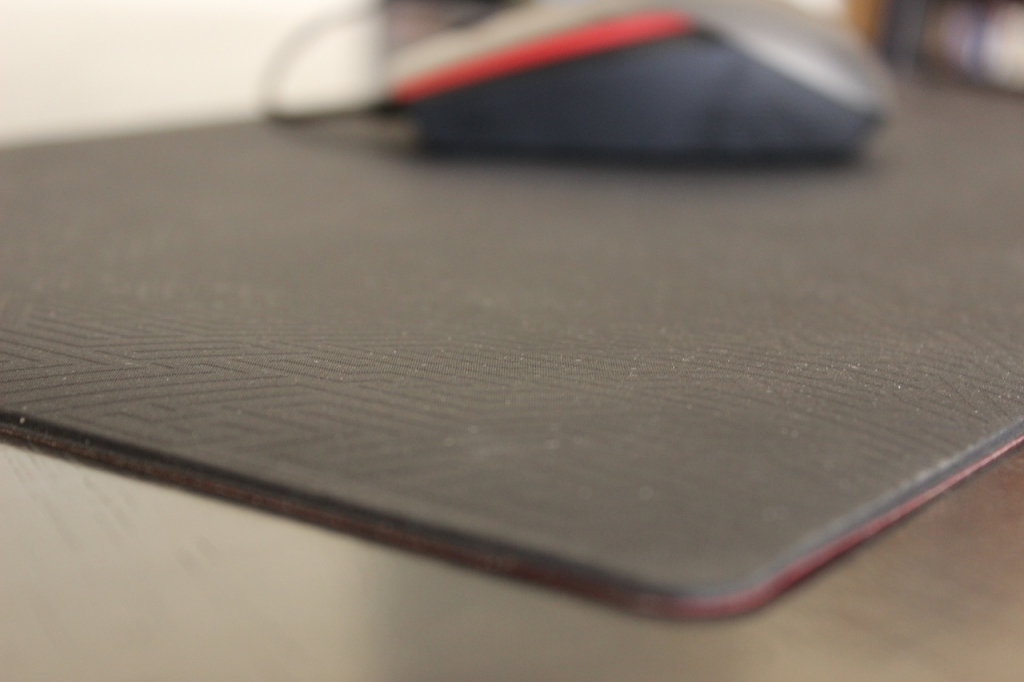 This mouse pad is an example of doing the little things right. The fabric part of the pad has been bonded down to the other layers so that it doesn’t fray. The silicone base ensures that the pad does not move when placed on your desk. The pattern while giving a unique look to your desk also provides a bit of resistance to add that level of control while using your mouse. It’s just a piece of good execution for sale. Speaking of sale, any information on price so far has been tentative at best so a lot of the pads allure depends on the price it gets released at. Often the mousepad is seen as nothing more than a piece of cloth meant to protect your mouse feet but then sometimes a product like this comes by that doesn’t redefine the mousepad just refines it.

The Sica’s Spartan rendition of a gaming mouse falls flat as while the sensor is decent it really lacks any other features apart from replaceable switches to justify any price tag. Given Republic of Gamers history, this mouse might not come cheap. Word on pricing of the Sica is still unavailable.

The Whetstone on the other hand is an extremely satisfying product to use in combination with any mouse. The silicone base and the texture on the surface make it a pleasure to sit on your desk. We rate it a solid 4 stars out of 5 for the finesse in execution by Asus. The price is still up in the air so keep an “eye” out.

The review’s boring wall of text was interspersed with pictures courtesy of Madhurima Khadilkar, whose career as a botanist fell through after she threw stones at a glasshouse. Check out her Instagram for more of her brilliant pictures here.