An interesting  new  spotting has occurred on the SiSoft SANDRA benchmarking database, which features the new AMD Polaris 10 GPU along with its entire hardware specifications. Polaris 10, regardless of what the name suggests is actually bigger of the two Polaris GPUs, the other being Polaris 11. The Chief Architect & head of AMD’s Radeon Technologies Group has stated that the naming has been done in a chronological manner, as Polaris 10 was designed before its smaller counterpart and has therefore been designated a smaller numerical value. AMD’s Vega 10, which is set to release in 2017 will feature AMD’s Vega architecture, and will be the company’s first to be powered by HBM2(second generation High Bandwidth Memory), set to replace the Fury line of GPUs.

The database entry indicates the usage of 8GB GDDR5/X, 256bit GPU along with 2304 4th gen GCN cores in the upcoming Polaris 10. A noteworthy observation is that the very same bus configuration and memory structure is reportedly being used in GP104 Pascal based GTX 1080 & GTX 1070 graphics cards.
The particular Polaris 10 chipset used here bears the 0x67DF device ID, which according to the recently released driver source code by AMD suggests that what we see here is a cut-down version of the Polaris 10. There is a strong probability that this is the configuration that we are most likely going to end up seeing as the upcoming R9 490/480. The full device ID being 0x67C0 and most likely to be equipped with 2816 GCN cores, similar to the Hawaii XT.
The aforementioned driver source code has also confirmed that Polaris 10 is indeed Ellesmere while the Polaris 11 is said to be Baffin, both of them being Arctic Island GPU code names.

The SiSoft entry also shows the card to have a clock sped of 800Mhz, which is surprisingly low. So, we might just be looking at an eager prototype of the Polaris 10. This is considering the fact that the 14nm FinFET clocks much higher than 28nm. Considering this, a minimum clock speed of 1150Mhz is to be expected from the final product.
Having dealt with that, the Polaris 10 surpasses the GTX Titan Black(featuring a full GK110), which coincidentally performs better than the 2816 GCN-powered Hawaii XT. And, if one were to compare the leaked benchmarks of the GTX 1070 and the GTX 1080, he might notice than the Polaris 10 surpasses the upcoming NVidia GPUs as well in terms of performance.

Despite having low clock speed and the lower number of GCN cores, this iteration of the Polaris 10 outperformed the R9 290X in fields where one would expect it to outshine the competition. This, in turn, is a clear indication that 4th generation of GCN cores is going to be more efficient and powerful than its predecessors, indicating towards more performance per clock.
Another noteworthy observation is that this engineering sample of the Polaris 10 contains 6Gbps GDDR5 memory chips, rather than the XGDDR5, which, upon combination with a 256bit bus delivers 192Gbps of bandwidth. Exactly half of what the R9 390 and the 390X offer. This could mean that the final product might feature 12Gbps XGDDR5 memory chips, to equal the speeds of its above-mentioned predecessors. 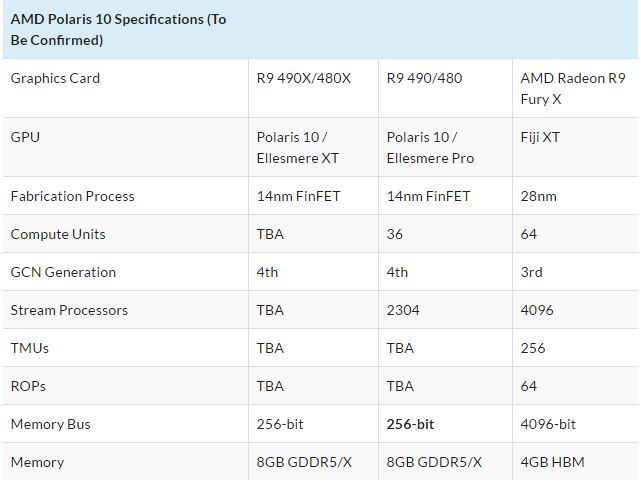