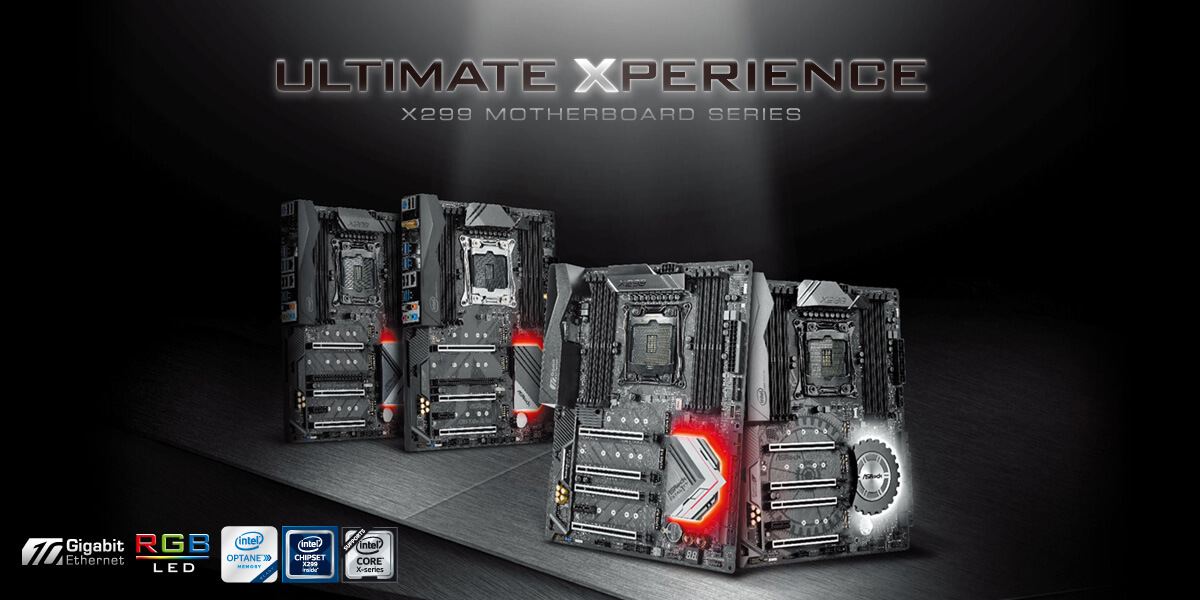 Board partners of Intel have ripped off the floor of Computex this year, with massive amounts of x299 motherboards for Intel’s SkyLake X and KabyLake X CPU families.

There are several motherboards from ASUS, ASRock, Gigabyte and Biostar to start off with but this time Intel is prepared with their board partners a fleet of diverse motherboards suiting one’s needs.They have powerful HEDT designs supports next gen processors and boosts RAM speed above the limit and what not?

So without wasting any more time further, let’s take a look! 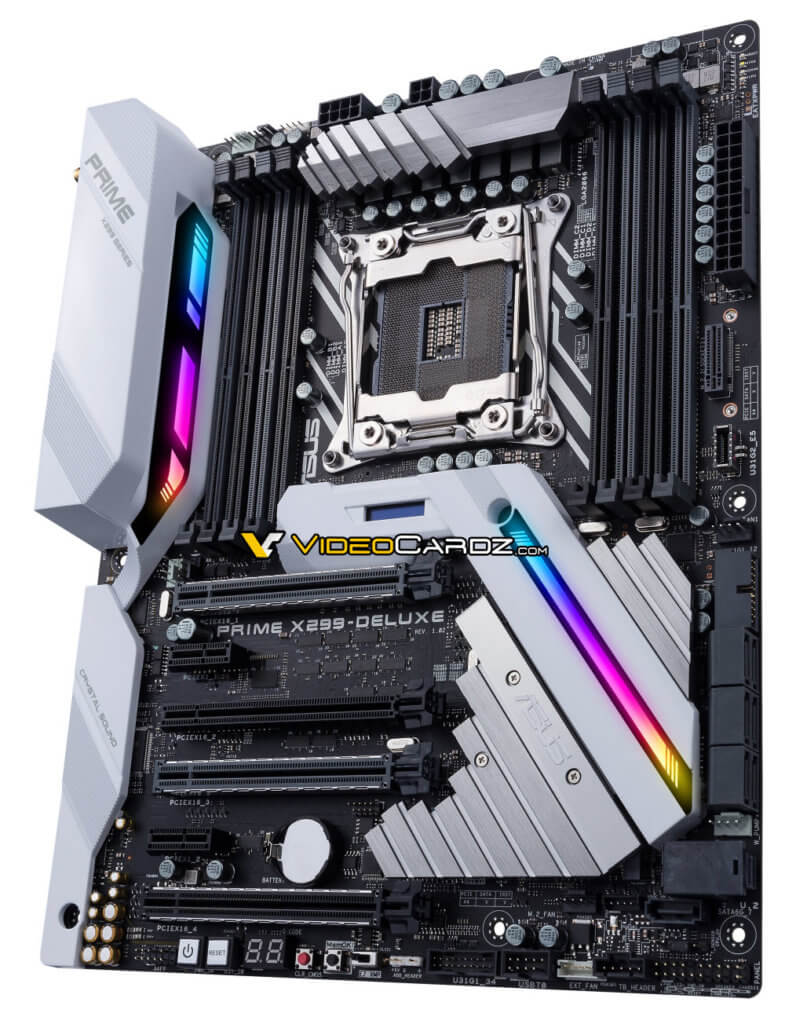 With the accents of white and silver over the heatsink,  PRIME X299-A from the house of ASUS is no doubt a feature rich motherboard featuring LGA 2066 socket supporting Intel’s newest Core X processors which in turn draws all the juice through its 8+4 pin power configuration resting on those 24-pin ATX connectors supplied boards.

These motherboards give us a glance of eight DDR4 DIMM slots which is enough for supporting 128GB of memory at high speeds of 2666Mhz natively crushing records of recently old Intel XMP 2.0 technology.

Detailing the board as to be done, it owns three PCIe 3.0 x16 with two PCIe 3.0 x4 and single PCIe x1 expansion slots with two barely visible M.2 slots beneath the usual PCH cover, where one finds the way near the north while the other at the very bottom below the PCH cover.Where storage being is in concern, this variant of ASUS premium board gets 8 SATA III ports accompanied by two USB 3.0 ports and as usual what we see in most recent motherboards, a bulk of I/O functionalities.

More X299 products to be included soon are: 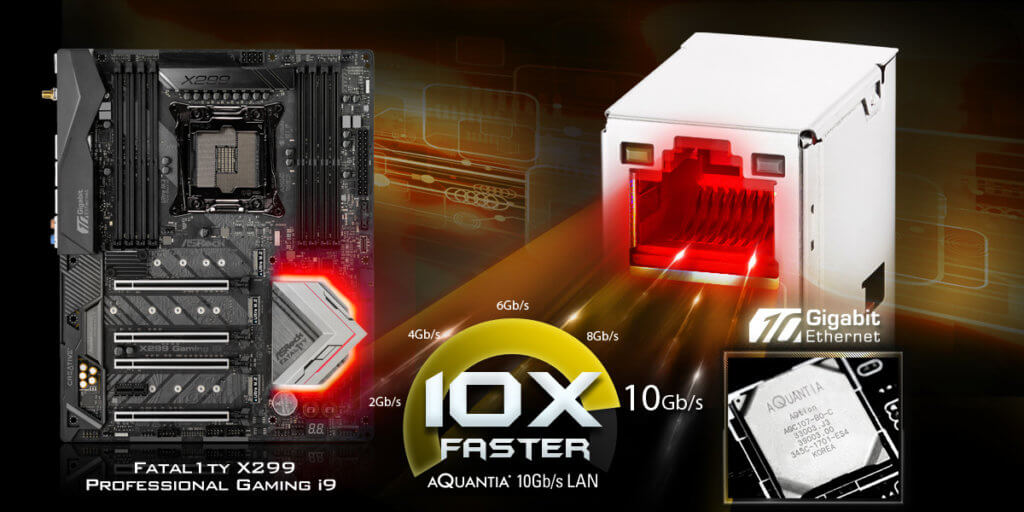 Beefed up in design, with solid silver and black colour layout, The X99 Professional Gaming i9 is the beast from ASRock for the latest Intel’s Core X processors (socket LGA 2066) being powered by an 8-pin connector configuration having 13 phase Digi power design, and yes for enthusiasts in extreme overclocking.The motherboard get’s the power to perform from 24-pin ATX connector where memory prevails in 128GB capacities with a blazing fast speed of 4400Mhz in eight DDR4 DIMMs.Expansion slots are here with four PCIe 3.0 x16, three M.2 and one PCIe 3.0 x1 slot.Mentioning storage, here we get to look at 10 SATA III ports with two USB 3.1 ports and 4 USB 3.0 ports.The LAN we get to have a glance here is from Aquantica, their 10 Gigabit LAN, Intel 802.11ac Wi-Fi and ASRock BIOS flashback tech.Yes, for all the fancy people , RGB is a matter here and a Gaming Armor across the entire PCB.

Who doesn’t know about the professional overclocker Nick Shih? Guys, here we get a motherboard signed by himself at the floor of Computex 2017.It’s nothing sort of a beast with beastly features.And it is called as the ASRock X299 FORMULA OC with a beastly design of silver and metallic black in a standard ATX form-factor build for Overclockers!

Aesthetically, there’s lot’s to show as here is the Gaming Armour over the PCB and lot’s to illuminate as RGB is across.

So after so many beastly and manly and what not kind of boards , here’s finally a small form factored board from ASRock which looks equally sweet and smart in the motherboard category known as the ASRock X299-E ITX/AC , a LGA 2066 board with 4 DDR4 SODIMM slots can hold up to 64GB with a speed of 3200MHz(OC+).7 phase Digi power design is prominent here with single 8 pin connector.

A well tuned motherboard for the newest Intel Core X series has worn a matte black PCB and with red textures where as the heatsinks are seen to include aluminum based and silver color blocks. What a splendid board to be seen even when the RGBs are switched off .It’s of course a LGA 2066 board with single 8-pin connector and a 24-pin ATC form factor also feature a 11 phase Digi power design for overclocking enthusiast .

A full extended ATX motherboard with a yellow and black scheme, this is the flagship X299 motherboard from Biostar , the X299 Racing GT9.It does support Intel’s Core C chips having the LGA 2066 socket , power is supplied through the 24-pin ATX connector and this board also sports a 14 phase power delivery system for potential overclockers. 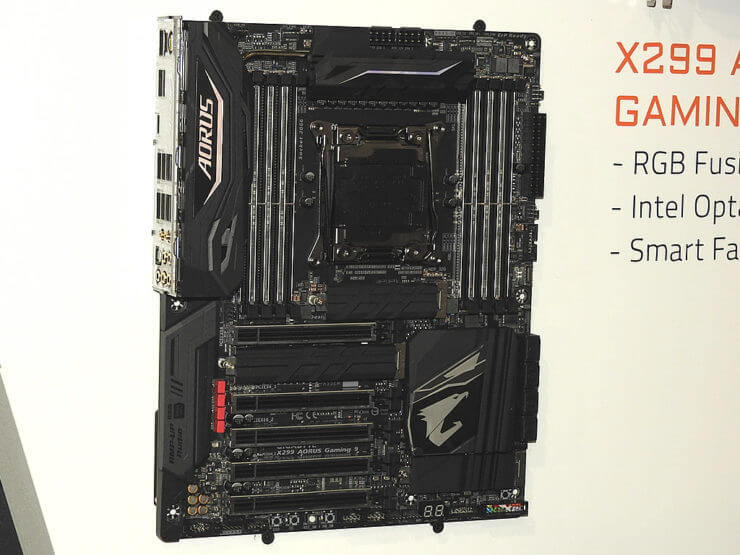 This very motherboard from the house of Gigabyte’s AORUS comes with an orange-black accent , a very basic entry level motherboard with no RGB features only having the orange illumination from the chipset as well as from the sound board with 5 phase supply. It conquers  5 PCIe slots having two of them illuminated with LED lighting , probably the x16 ones. It has 8 DIMMs of the HEDT segment with 6USB 3.0 slots , a very antique PS/2 slot and the usual 7.1 Output RCA ports.

With the plenty of PCIe slots , i.e., 5 PCIe slots with orange LED lighting , here Gigabyte presents their AORUS Gaming 7 X299 which even has orange LED illumination on the RAM slots too. Even on the chipset heatsink. Design wise there’s plenty of RGB but it seems it doesn’t go with the scheme so one can only keep the orange accent too glowing for the purpose. It has gold tipped RCA outputs , 2 ethernet slots and usual USB 3.0 ports. Thunderbolt/USB-C ports also make their existence here.

Last but not the least , here comes the very premium offering from Gigabyte’s AORUS , the X299 AORUS GAMING 9 which has all the bells and the whistles like he LED factors , full RGB and the I/O segment. This a full beefed up motherboard with top notch  premium specs built and meant to target the high end market. It is a LGA 2066 board with 12phase power design for overclocking enthusiasts. Having 8 DIMMs of support capacity of 128GB this offers blazing fast speed of 4400Mhz(OC+).Having five PCIe 3.0 x16 and three M.2s it is to noticed that the M.2 slots are cooled by  heatsinks provided out of the box. One can see large tank like heatsinks on the power delivery system are attached  via a heat-pipe for effective cooling and a lot of RGB goodness! We get 8 SATA III ports , two USB 3.1 ports and 4 USB 3.0 ports with a range of I/O starting with  dual Intel Gigabit LAN , 7.1 channel audio, Intel Wifi and audio is pumped by Sound BlasterX 720 Codec. And obvious this motherboard will be costly enough when it will get it’s public debut.

All the very recent motherboards have been detailed here as they make their way to Computex 2017.We will be detailing more, as new motherboards come out! Stay tuned and please let us know what do you feel of these next gen motherboards offering features from overclocking to RGB illumination to beefy looks in the comment section below!