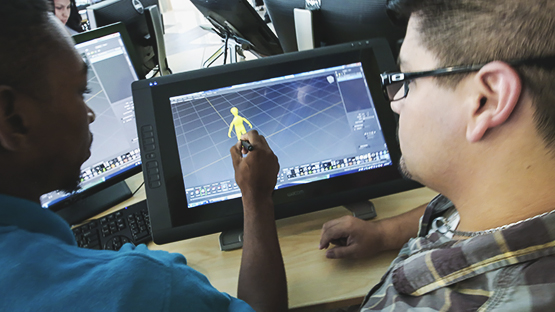 Video games have come a long way from the days of Mario to the big AAA 3D games we have today.Back then video game development was relatively simple and the industry wasnt so huge. 1 person with a computer and some knowledge of Programming could make a game . Nowadays a AAA Studio can have a team that spans in hundreds .  These include programmers , Designers , Artists etc . But it is still possible to make a game all by yourself or with a few friends and it has never been easier to do so .

Enter game Engines like Game Maker Studio, Unity, Stencyl . Free Image editors like GIMP and free modelling tools like Blender and you are ready to make a game . First some pre requsities. You have to decide what aspect of game development interests you the most . You could be a good story writer , a good artist , a good level designer , a good programmer etc . Deciding this is one of the most crucial parts of developing a game . A person who is developing a game all by himself/herself is usually a jack of all trades .

Now a big question is do you need Programming to make a game ? Well Yes and No . You can indeed make games without knowing any programming at all . Engines like Stencyl and GameMaker dont require you to write a single line of code if you dont want to . But the way the require you to implement in game logic while done in a visual way requires you to think like a programmer . I personally would recommend learning to code . It helps a lot . And even the very basics of programming can be sufficient to make a decent game .

Now which engine to start with ? Well personally i started with Game Maker studio and am somewhat proficient in it by now . Its a great tool for beginners but can be quite powerful too . It has its own language called GML which can be used for programming your game . The UI is very simple and there are tons of tutorials out there . Game Maker has a free version too . But it lacks some features that one may find useful later on . But for starters its quite sufficient . GameMaker has one shortcoming , its not really made for 3D . In fact it doesnt even have a 3D mode . But as a beginner one should stick to 2D first.

Now we will look at another engine which is very popular among indie developers . Its Unity . Unity free edition offers a lot more than the free version of Game Maker does . Its overall a much more powerful engine with C# support and a full fledged 3D Mode . In Earlier versions of Unity the 2D mode wasnt so developed . But right now its improved a lot . Unity has a huge community of developers and huge base of tutorials making it an ideal choice for developers .

Now lets say you want to get into 3D Game development , then what would you use ?  For 3D Game development creating/modifying and animating 3D Assets is very important.  A free tool like Blender is an ideal choice for beginners . Keep in mind creating assets and animating them is no easy job . If you are more interested in working with the assets in game you would be better of downloading assets or have someone else in your team who knows his stuff .  You can do some cool stuff in blender by downloading 3D Models and then playing with them .

Also you can use image editors like GIMP to create 2D art , assets etc . So there you have it some of the basic tools you can use to make a game . Now downloading all these and watching a bunch of tutorials is probably what most of you will do . Yes watch the tutorials . Watch them as many times you want . Ask questions on forums. Fulfill your curiosity . But as long as you dont start working on a game yourself you will get nowhere . It can be anything . It can be a simple game like Pong . It doesn’t have to be anything new and original . Remember , Rome wasnt built in day . Start making small games and you go from there . If you know a programming language you can even start by making text based games . By making a game you will soak up knowledge like a sponge .

So what are you waiting for ? Go out there and start making your masterpiece .