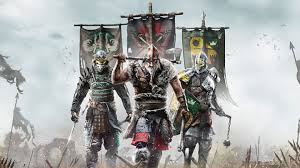 Ubisoft showed off a brand-new game today , For Honor ,  featuring Vikings , Samurai’s and Knights fighting each other

“I haven’t actually been able to really put a name to For Honor’s genre,” Vandenberghe explains. “It’s close-quarters melee combat. ‘Shooter with swords’ is something we’ve been throwing around, and it’s pretty accurate. People have tried to call it a MOBA, but it’s not really a MOBA. It seems a little like one when you look at it, but it doesn’t play that way at all. I think what’s going to happen is we’re going to release the game and then our audience is going to name it. I think they will be the ones to really name that genre.”

“It has the potential to be a completely new way to fight in video games,” Vandenberghe said. “It is built around a new organization of the controller. We have put your control of the weapon on the right stick, that

Not much is know about the game , what we do know is that players have a deep amount of control over swinging their sword:

Using the new Art of Battle system, you will have full control over the placement of their weapons. You can attack and move around just like you normally would, and then you can also lock onto a single opponent and enter into a dueling mode. The second you lock onto a target, your right stick goes from controlling your camera to controlling your stance. If you flick to the right with your stick, you move to hold your sword or shield on the right side.

Players can fight a single-player campaign or engage in a four-versus-four multiplayer battle.