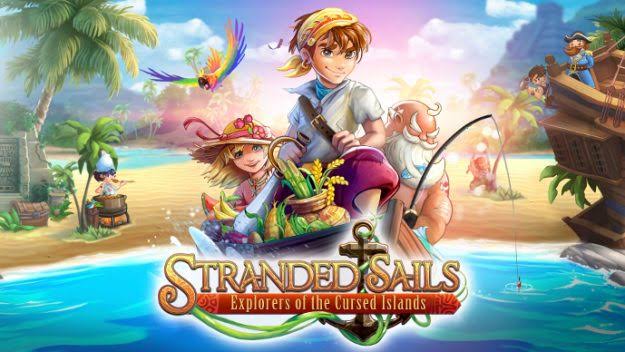 Stranded Sails – Explorers of the Cursed Islands, puts you in the role of Wright, who capsizes along with his crew on a mysterious island. Similar to farming simulators like Harvest Moon and Stardew Valley, Stranded Sails lets you build your own community with sustainable sources of food and resources.

Wright and their father Captain Charles who captains his own ship and sets off on an adventure to escape their monotone life, but a storm leaves them stranded on a tropical island.

Your early hours will be spent trying to find your crew members and learning the basics of the game, especially managing your energy. Energy is very important as every action will require energy. Energy can be refilled by sleeping in your bed.

Despite having a large crew, it falls on you alone to keep things running. You have to feed the entire camp, by growing vegetables, catching fish and then preparing them in a large pot for everyone.

You also need to build accommodation for your crewmates and then take on various missions that often boil down to fetch quests to further the story.

Construction requires various resources such as wood that can be found scattered throughout the island and can be refined into building blocks from a workbench.

Exploration is limited to a single island at the start where you stretch your legs and understand the various gameplay mechanics. You can acquire a small boat from the ship’s carpenter, which will allow you to explore the other islands.

However, staying away from your main base can cause your plants to dry up and Wright will also require food.

Food is the central currency here, as you can feed the crew, crew stew.
Keeping your crew happy means they gift Wright various items. These can be new and improved tools or new recipes.

Dishes can be discovered by placing various ingredients of up to four and they give different bonuses to you.

As expected from a farming game, combat isn’t Stranded Sail’s strongest point and is fairly straight forward. The island is haunted by ghost pirates who guard precious treasure and will attack you on sight. It’s mostly running around and then button smashing whenever you can.

Stranded Sails – Explorers of the Cursed Islands gives a relaxing experience for those long days at work when you want to come back home kick back and tend to your virtual farm. It’s colorful and cheery visuals make it a good fit for a younger audience and goes easy on the eyes. Ultimately, however, Stranded Sails fails to offer deep gameplay and is best suited for casual gamers.