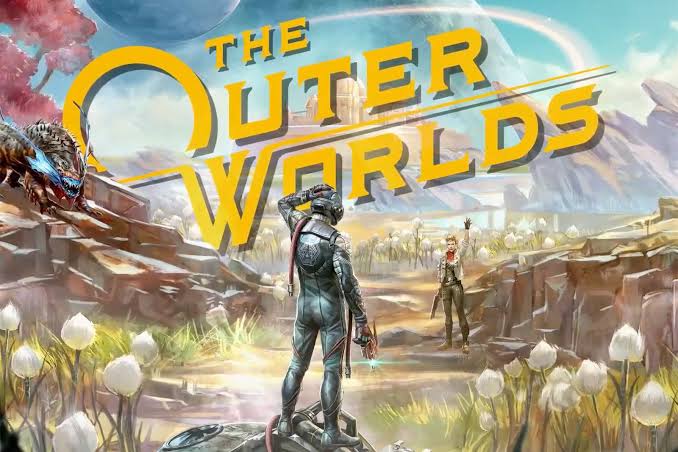 The Outer Worlds is Obsidian’s return to the first-person RPG market. Does it manage to meet the high standards set by their fans? or does it fall short of their expectations? Let’s find out.

The Outer World starts off with a brief explanation of the world. Humanity has conquered the final frontier – space, but it is engulfed in a corporate war. Corporations control the lives of colonists, in a dystopian capitalist civilization that is corrupt to its very core.

You play as a colonist who was left in hypersleep for decades. Awoken by Phineas Vernon Welles, a rogue scientist wanted by The Board, who wants you to help him take to overthrow the corporate overlords.

From the get-go, Outer World immerses you in this grim world but makes it clear that it’s not really taking itself seriously. It does a terrific job at touching some dark topics with a hint of humor that makes this game a perfect satire of our modern society.

Your choices matter in The Outer Worlds and it’s not always going to be a clear cut choice between the good and bad. Often you will be presented with a bad choice and another bad choice. And you will have to live with your own decisions.

Early on in the game, I had to get a power regulator for my ship. I could only get this by routing power from a town run by Spacer’s Choice or deserters who gave up their life of corporate slavery. At first glance, it might seem easy, evil corporate town vs helpless people, but once you get to know the people of Edgewater and the fact that they just want to get on with their lives, the choice becomes a lot more grey.

I realized whatever I decided to do, I was going to end up robbing a bunch of hard-working people of working electricity.

Your choices will also affect your reputation, certain factions will end up shooting you at sight if it falls below a certain amount. If you end up on their good side, they will offer you discounts. On company-sanctioned goods of course.

Every character I’ve met in The Outer Worlds was interesting and unique. All of the dialogues were also well written and did a good job of representing their morality. I could get a good idea at the character’s outlook on the present situation from their dialogues, something not seen easily in video games.

Storytelling has always been Obsidian’s strong point and The Outer Worlds is no exception. The storytelling and quality of dialogue are phenomenal. There’s a very clear indication that the writers took inspiration from Star Trek and Firefly, and I loved every moment of it.

In terms of visual customization, the character creation is fairly standard for an RPG. You can select from a bunch of pre-defined templates and then fine-tune various features to create a unique character.

What is very in-depth and true to Obsidian’s previous games is the allocation of perks and skills, allowing you to vastly modify your playstyle.

Want to be a smart charming devil that can talk or intimidate his way through danger? Go ahead and dump points into personality. But be warned you won’t be able to talk your way through random combat encounters. You could go all gung ho and shoot everything that movies, but is it really an Obsidian game if you don’t charm a bad guy into giving his loot willingly?

Attributes are broken into body, mind, and personality. Body affects strength and dexterity, mind includes intelligence and perception while personality influences your charm and temperament. Attributes are permanent and you will not be able to change them down the line.

While attributes affect your initial skills, you will be able to add more points to them to affect how good you are good at something. Every 20 points in a skill nets you a bonus effect.

Finally, aptitude gives your character small bonuses. These serve as sort of a job system that determines what you are really good at.

You will be traveling across the Halycon system aboard your starship the Unreliable. After the previous captain meets his untimely demise due to an that you might have unknowingly had a hand at, you assume his identity.

With the ship’s conveniently positive AI Autonomous Digital Astrogator or ADA by your side, you can choose your destination from the galaxy map. There’s not much else to traveling, and you can’t actually control your ship but there are some cool cutscenes and impressive cockpit views.

You won’t be traveling the final frontier alone though. You are joined by a quirky and vast cast of characters. Your companions are more than just cannon fodder and have their own strengths and personalities. Not everyone will appreciate your way of handling a situation and can interject in conversations to support or undercut you.

Up to two companions can accompany you at a time, but 6 of them are potentially recruitable. Companions provide small boosts to your own stats and increase your carrying capacity. You can also decide how they behave in combat and their equipment. Although for some weird reason you can’t unequip their helmets.

You could always travel alone, and there’s even a perk to help you out but you would be missing out on a lot of well-written dialogue.

You will be speaking a lot in Outer Worlds, in fact, it’s one of the core pillars of the gameplay. Almost everyone has something or the other to say, and you can pick up bits and pieces of lore from talking with NPCs. There’s also the occasional side quest.

Almost everything you do nets you XP and gaining XP lets you unlock perks. Perks are specific bonuses that can make your character better at something or it can be subtle bonuses like additional carrying capacity.

Every now and then, certain actions that you do might cause you to get a flaw. Flaws give you a negative effect but also a free perk. Being attacked by Automatons too much? you might get a flaw that makes you nervous near automatons. Flaws aren’t forced upon you and you can choose to reject them if you want.

Being able to customize your character so much and the fact that your stats affect the game in major ways means the game is replayable for the sake of trying out various character builds alone, not to mention that your choices will affect the ending.

The game is divided into various planets, and while they are not truly open world, they are similar to shoebox worlds we have seen in games like Mass Effect or Obsidian’s own Knight of the Old Republic.

Difficulty spikes are fairly standard and I had no issue completing the game on hard. I do plan on going back for Supernova, which is similar to survival mode in older Fallout games. No fast travel, limited saves, you need to eat, drink and sleep, and your companions can die permanently. Regardless of which difficulty you choose, completing everything Outer Worlds has to offer will run you 40 hours for one playthrough, although collecting all trophies and the replayable nature of builds will net you almost double the playtime.

Visually, the Outer Worlds is gorgeous. It does a great job of representing the alien landscape with its overgrown flora and outlandish flora.

At night neon lights flicker in towns and remind you of a home away from home. Vending machines peddle company goods, bars are populated with patrons and automatons hum in the background. The atmosphere is fantastic and varied. The lush world of Terra – 2 stands out in stark contrast to the arid inhospitable lands of Monarch.

While lip sync is a hit and miss, the characters are well designed and do a great job of representing their personalities. NPCs and monsters are also well designed and you can distinctly identify faction members from just looking at their designs.

Overall, a fantastic job in terms of overall visual fidelity.

Sound design is also well done, the soundtrack does a great job of creating an epic feeling when you are blasting lasers at enemies. The weapons effects have a good crispy sound to them that gives you the satisfaction as you melt a marauder with your machine gun.

Voice acting is good, and for a game that doesn’t feature a voiced protagonist, there’s a surprisingly good amount of dialogue available from other NPCs, all of which is voice acted.

The Outer Worlds is Obsidian’s triumphant return to glory. If the story and roleplaying aspects don’t get you hooked, the smooth gunplay is bound to. With influences from some of the best games in the genre and enough originality of its own, The Outer Worlds manages to scratch that first-person RPG itch that been burning fans for so long.