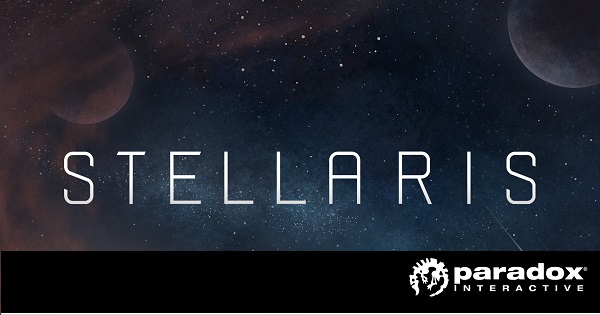 What do you get when you take the depth and extremely well done grand strategy formula of the Crusader Kings and Hearts of Iron series, add 4x gameplay and take it all to space ? You get Stellaris.

4X is a genre of strategy-based video games in which players control an empire and “eXplore, eXpand, eXploit, and eXterminate”. And grand strategy games refer to games that places focus on grand strategy: military strategy at the level of movement and use of an entire nation state or empire’s resources.

First of all, the game features no story. There is no linear plot that you have to follow, instead, you are put in charge of a faction and then put into a huge galaxy( you can have up to 1000 stars on the largest map size) to make your own story.Your choice of race will however heavily impact your adventures. 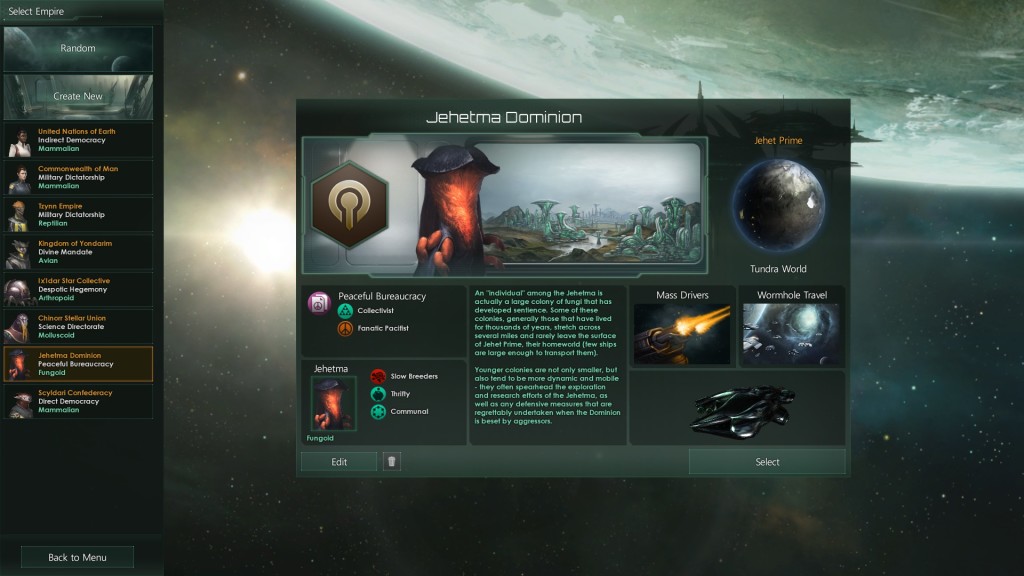 Each empire can be customized with various genetic traits, ethical guidelines, travel methods, picking its homeworld type, leader, emblem, traits and more.  There are 3 types of Space Travel: Warp Drive, Hyperdrive, Wormhole Stations. Each one works a little differently and have their own advantages and disadvantages.

Once you pick your race the galaxy is randomly generated to contain an unpredictable range of different species, whose nature are determined by how xenophobic they are, how spiritual, how materialistic. These infinite permutations guarantee infinite replayability and an exciting gameplay when you explore the vast galaxy .

Unlike most 4x games, Stellaris does not feature turn-based gameplay. There is a clock that runs in real-time but can be paused anytime to make strategical decisions.

Science ships can be sent out with scientists to survey planets for resources and habitability, to discover anomalies that can be researched, and to undertake special projects that trigger event chains. 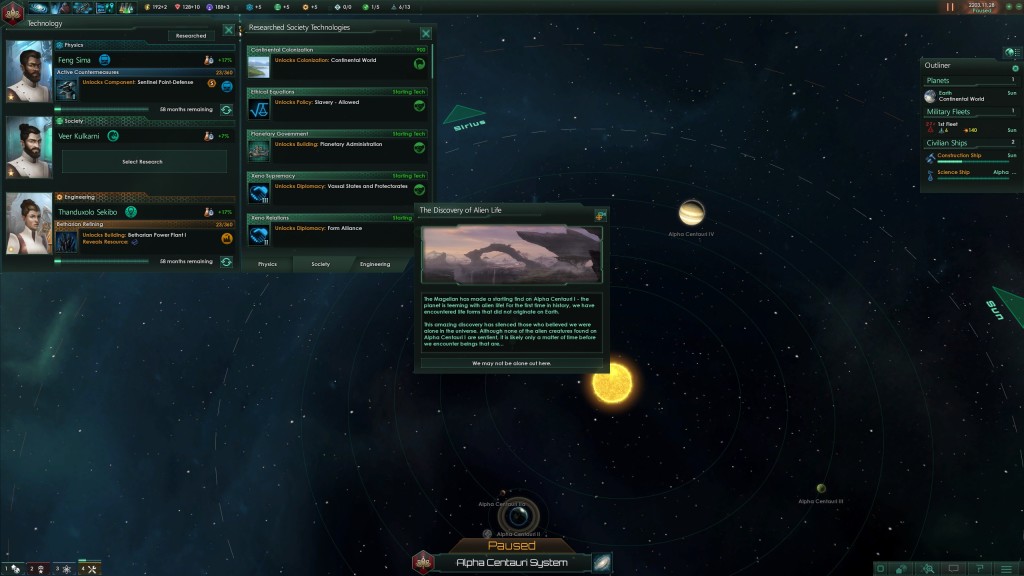 Colonizable planets are divided into tiles that can be manned by a population unit; buildings can be constructed to enhance the resources naturally produced by each tile. These pops can be enslaved, however doing so will probably result in a diplomatic penalty. Every pop has traits, but they can diverge into different traits and ethics over time. Gene modification allows modifying of these pops to your needs allowing for a dynamic playstyle.

As an empire grows, it will increase its sphere of influence around the star systems in its immediate area. This area, shaded on the galaxy map in the empire’s color, can be considered the empire’s territory and borders. Most stations may only be built and exploited within this sphere of influence. If the empire’s borders expand or contract, any stations in gained or lost star systems will change ownership accordingly. Ships cannot enter another empire’s borders without treaty or war.

Areas that cannot be colonized can still be mined for resources or research points as long as they lie within the borders, giving unwanted systems use as well as further expanding your borders.

There is a limit to how many planets can be directly controlled which, thus eliminating unnecessary micromanagement and the rest can be assigned to a sector, which is run by an AI leader who automatically constructs buildings and gives an adjustable share of the resources back to the empire. Stellaris is utterly crammed with systems and little aspects that affect everything, so this is a very welcome feature. 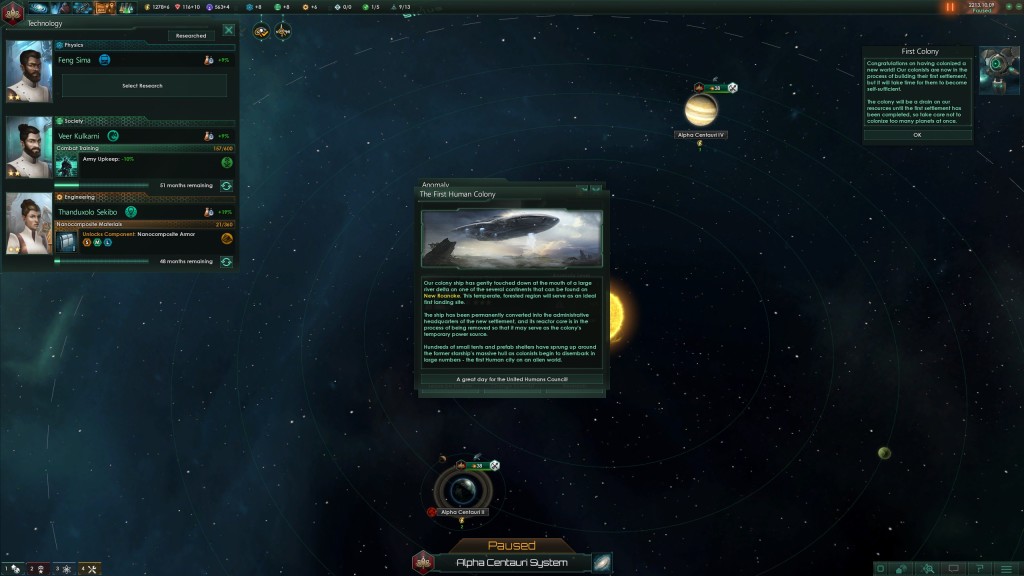 The options that are available when it comes to managing your empire are plentiful. You can create factories, pick which resource to focus on, and create new ships to colonize other planets. Dealing with your citizens isn’t just a case of +/- X happiness due to Y reasons, but whether what you’re doing is compatible with their particular needs.

Leaders can also conduct research and lead armies. There is no set research tree in Stellaris: rather, you can choose from three research options from either Physics, Society, and Engineering. 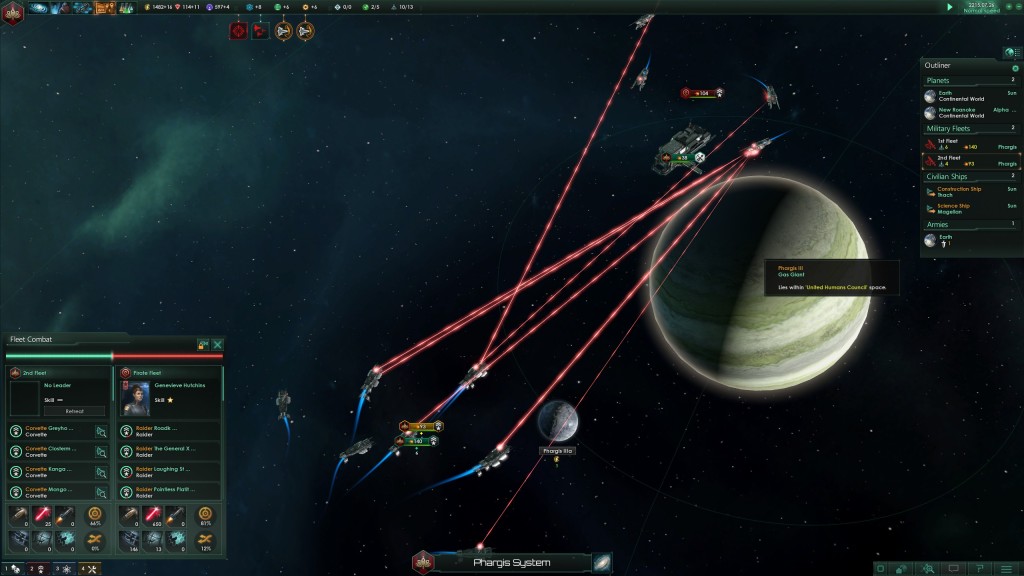 Other empires can be interacted with, forming alliances and federations, as well as trade agreements.

Diplomacy in Stellaris draws on the model of previous Paradox games, each AI nation will have an opinion towards other nations based on relation values which are increased by friendly actions, diplomatic agreements, and agreeable ethos and decreased by hostile behaviour and incompatible ethos. You can also establish an embassy to improve relations with them. 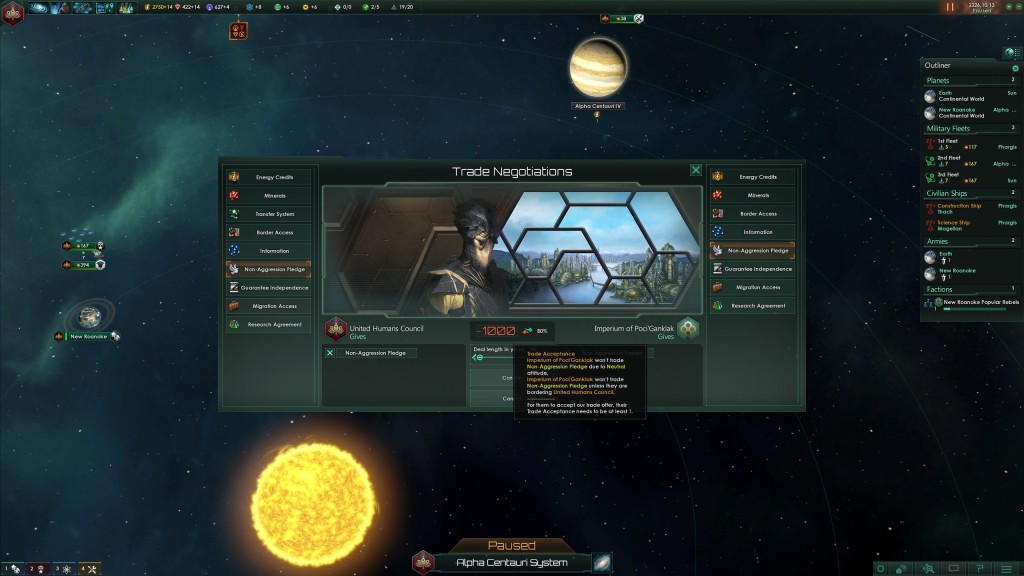 War goals must be specified before a conflict starts , you get a screen asking what your goals are for this war while the defender has a year to decide on their plan. Primitive civilizations can be studied for research points.

Ships can be customized using the latest technology with the designer, or can be automatically upgraded. Combat is automated, however, stats and military power play a vital role in achieving victory in skirmishes.

Fallen Empires are large and extremely powerful empires that have become old and stagnant and have large and powerful fleets. It is unwise to start a war with them unless your fleet is of equal power. But if you think you can take them on, defeating a Fallen Empire allows gaining of late-game technology.

You can also rename anything you want while you play.  Leaders, planets, stars, sectors, ships, etc can be renamed to whatever you wish to allowing for a great deal of freedom and letting players become attached to their faction. Who doesn’t want to rule a star system named after themselves ? 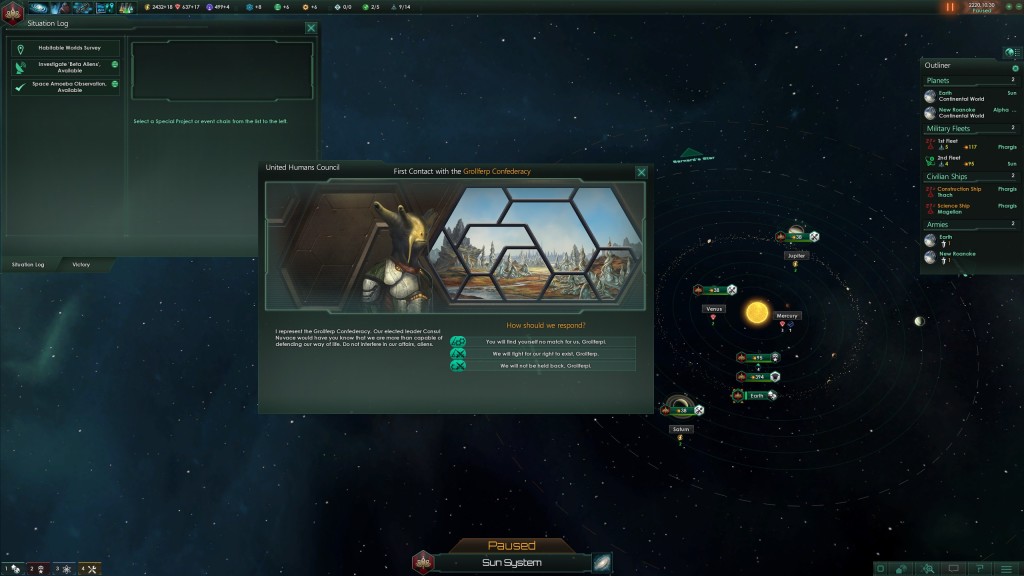 The AI seems to be very competent at managing an empire but not so much when it comes to diplomacy and war. They tend to remain passive throughout the game, occasionally striking back when they have a huge advantage and raising the white flag the moment you come knocking on their doors. 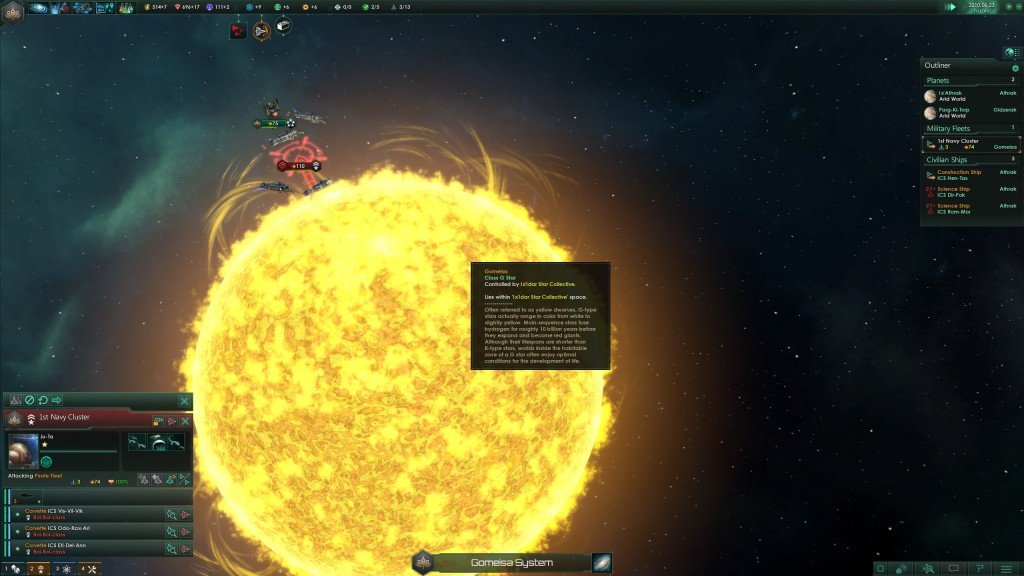 For now, there are 2 victory conditions:

Other victory condition such as research or cultural victory options are missing, which is kind of confusing because the game features so many options when it comes to other elements. Hopefully they will be added later on in a patch.

The graphic options of the game are a little underwhelming as they only feature resolution, display mode, refresh rate, and multisample level. But overall the game is beautifully designed and runs smooth on the STRIX 960 that is powering my system. 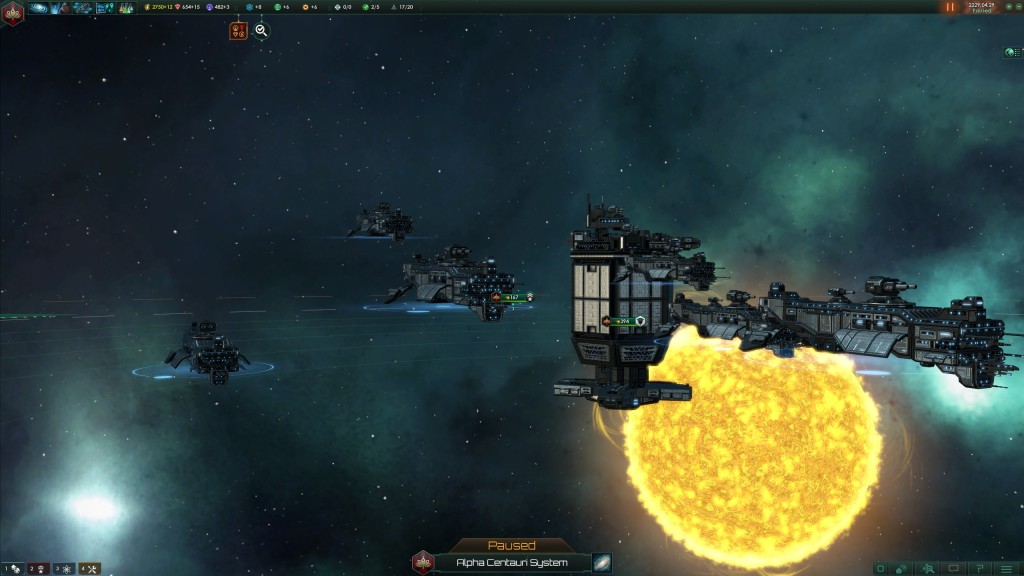 Everything from the ships to the faction portraits and even the planets have the tiniest of details in them that make the whole experience immersive and is only helped by the excellent soundtrack that gets you into the mood for adventure.

The UI is also one of the cleanest and player friendly one I have seen in a 4X game, something that really helps when you are 40 hours in with hundreds of units.