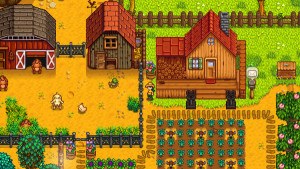 Stardew Valley is a farming and life simulator. This is an old school Harvest moon-inspired simulator unlike any other “simulators” that is reigning the industry right now. It is very fresh in it;s way throughout as it is way different from other games and also contains farming during the time of winter, the time when farming does not happen. It’s challenging, it has a beautiful story to it, an amazing theme which drew me towards the game more and more. It also separates itself from every other mechanics in the “farming during winter” part as it has not been seen before.

Stardew valley is a game in which you have to wake up, water and pick crops, refill the dog’s water, feed the chickens, restore your health by eating some foods, go in the town, check your calender if anybody has a birthday or not just for the town events. You can also check your bulletin board to check if anybody needs something to get done. Once done, from there, your decision on what you will do next will be in your hands. It includes either going fishing and catch all the fishes, or go explore and slay some monsters and collect ores. Or you can re-plant some of your crops that you harvested earlier. Either way it is fun at anything you basically choose to do, you will have to do the other at some point. There are tons of things that you can do on a given day. Every player start with a huge plot of farmland and some tools. Then the time comes where you will have to clean some space to get your crops and finally plant them. There is one thing, that most players did not like about the game is that there is no tutorials or on-screen instructions, but this gives a perfect platform for the game to introduce to the players to something new.

Story cutscenes are introduced to us very nicely. Stardew Valley has an end to it’s game but it is not the complete end of the game. There are several characters with whom we will be introduced after the story’s ending which are very much worth paying attention to. The characters are interesting so I suggest keep an eye out after the game’s end. There are characters in the main game whose true identity will be withheld. Majority are the townfolks, But once you complete their tasks, you will be able to share dialogues with them which on one hand impacts in the story and on the other, gives us an idea about the character’s true colour and helps the feeling of attachment to the NPCs who are constantly wandering about town. The NPCs are always wandering because they have constant weekly schedule. Most of the time, some shops remains closed as the town ladies goes out of town to attend their own buisness. This may be fustrating to some, but you just have to go on with it as some relaxation is needed one day or the other. If you see that shops are closed, remember, there is always an option to go and do something else. 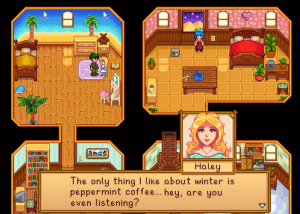 Small mini games inside this game is what I enjoyed. Mini Games like hooking a bait into the sea to catch a fish. I can spend an entire day fishing in this game than go to town and complete a job for a townfolk. But then again, it will be for you to decide.

My Final Verdict, Stardew Valley is an amazing “never seen before” simulator which never fails to keep on delivering the player with things to enjoy and things to which one can get addicted to. There is TONS of things which I have’nt explored yet. The core mechanics and the relaxing aesthetics goes hand in hand in this game from which you will never want to leave. I give this incredibly beautiful game by publisher Chucklefish Games a 9 out of 10.