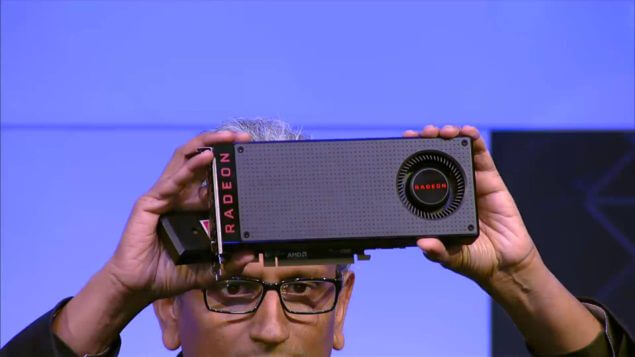 AMD has left the whole wide computing world in awe after unveiling its latest line-up of GPUs and CPUs at Computex 2016 Taipei. While the Zen CPUs have proved to be nothing short of magnificent, AMD has left no stone unturned with its Radeon RX 480, the first glimpse of Polaris. The battle between nVidia and Radeon GPUs has already been mouthwatering with the release of nVidia’s GTX 1070 and 1080 but the release of the Radeon RX 480 has spiced things up even more. What a time to be alive!

Apart from the flamboyant price tag that the RX 480 flaunts, AMD has also asserted that the card offers performance analogous to that of an R9 390 X, the air cooled R9 Fury and GTX 980 costing $400 and $500 respectively. The Radeon RX 480 features a mammoth 4/8 GB GDDR5 frame buffer feeding data on a 256-bit bus. Another feature that appears striking is the 150W TDP, all thanks to the 14nm LPP FinFet node. Generally, the TDP is also a patent indicator of temperatures, and it’s inveigling to see that AMD has not only focused on performance but also power efficiency this time round. The GPU in itself appears beguiling with the same slick looks akin to the vestiges of AMD’s own Radeon Nano and Fury X.

AMD also claimed that the RX 480 in crossfire can beat the GTX 1080 from nVidia and they used the following slides to metal their claims :- 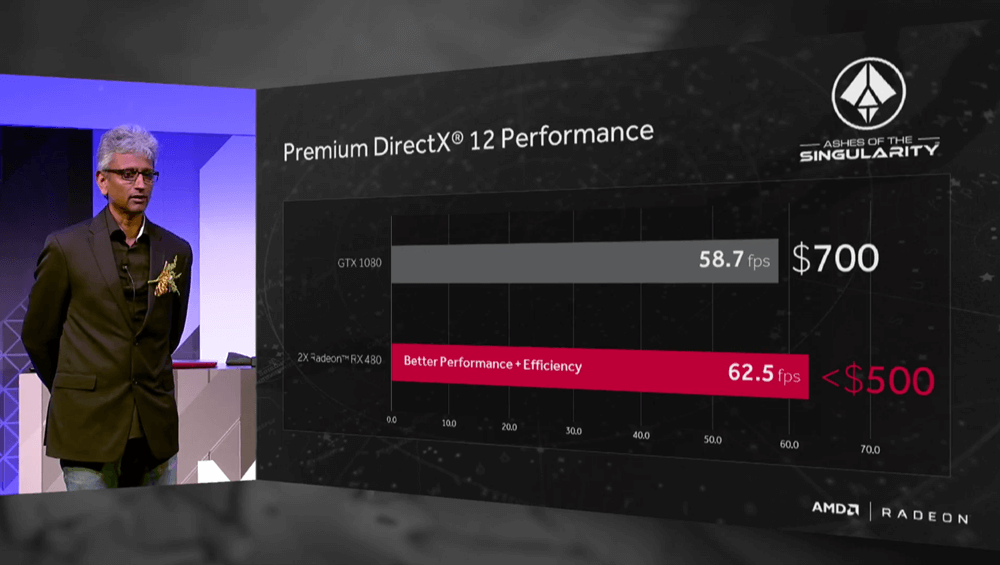 The benchmark was however of Ashes of the Singularity, a DX12 title which has appeared to favour AMD over the course of time but is still a reputable benchmark and serves to drive the purpose of AMD home.

Radeon RX 480 To Be Budget VR Aid For The Masses !

The RX 480 also features an impressive 5.5 TFLOPs of computing performance which well exceeds the recommended minimum for VR Gaming. The price tag of the RX 480 would mean that VR Gaming will be affordable to the masses and it won’t be an aristocratic luxury anymore. AMD has been nothing short of pompous with its LiquidVR development kit and Radeon Pro Duo, a card devoted to VR Game development. 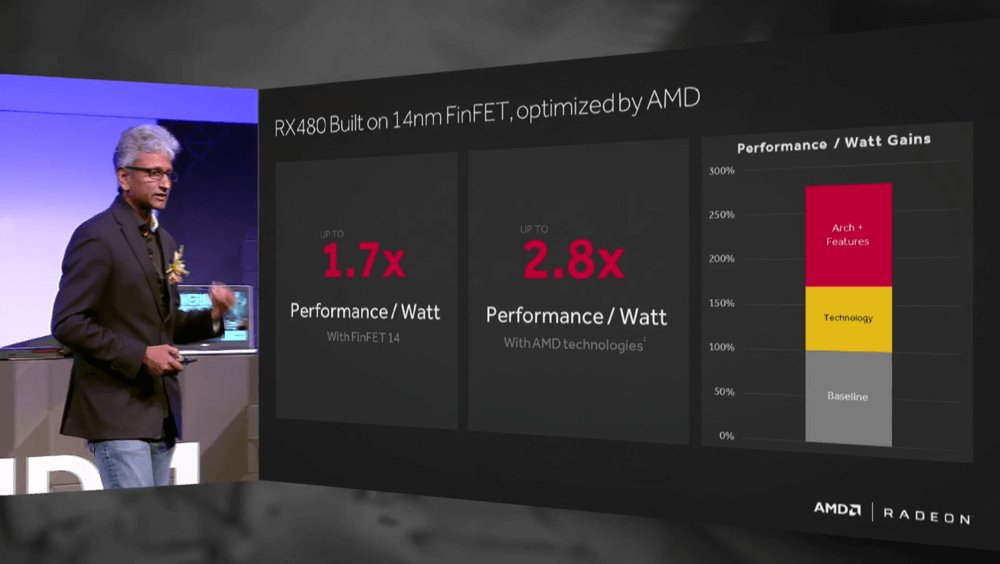 “What I’m most excited about with Radeon RX 480 (Polaris) is that it could increase the penetration of both HTC Vive and Oculus Rift VR solutions and increase VR accessibility for more gamers,”

“A VR-ready GPU at $199 democratizes PC VR solutions and enables even lower-cost VR solutions in the future.”

AMD’s Computex livestream was absolutely mind-boggling with game changing unveils all over the place highlighted by Zen and the RX 480’s 200$ price tag. If all settles in concord, this could possibly be the era AMD makes a comeback and the market is back to an equilibrium; something which has never proved to be menacing for the customers and enthusiasts.