The release date for No Man’s Sky draws near and also the imminent No Man’s Sky Day One Update. According to developer Hello Games, the day one update will remove all exploits and bugs seen in the leaked footage. More precisely the bevy of leaks posted by the now familiar Reddit user daymeeuhn. 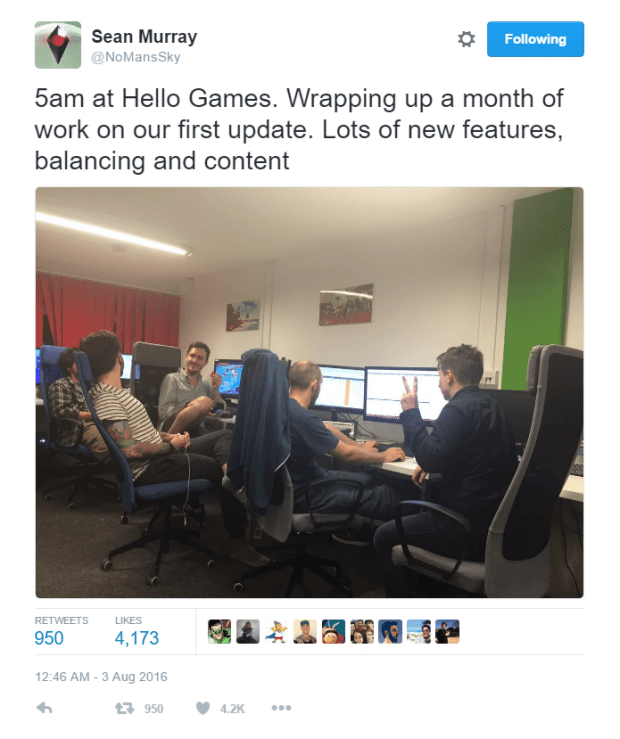 Within the past few weeks, No Man’s Sky gathered the most amount of attention it would ever need. First there was the mind-boggling $1250 purchase of an early version of the game. Then a wide array of leaks featuring information about the game. Among those leaks, the most eye-catching was the ability to reach the center of the universe in less than two days. But among all this, there were numerous glitches and bugs in the early version of No Man’s Sky.

It was evident that this version of the game was clearly an unpatched and incomplete version of the game that is not ready for sale. So to clear things up, the big man of Hello Games, Sean Murray confirmed that they are finalizing on the game’s first patch which may launch as the No Man’s Sky Day One Update. This update will take the role of removing all early version exploits and then some.

Murray’s lack of attention towards the leaks indicate that he wasn’t too concerned with players going through an incomplete version of the game. The final version of the game will be out next week on August 9th. The day one update was in development ever since No Man’s Sky went gold back in July. So in this final week before launch, the game is getting its last pest removal.

“There are bugs. Quite a few in fact. In some moments I really start to feel as if this game would have benefited from a beta test. PRAY for a Day 1 patch, not only to nerf the sale cost of Atlas Stones but also to address some of this too.”

This is sourced from daymeeuhn’s complaints with the game.

Beam Upgrades are broken – At this time, the Beam Upgrades for the multi tool is hysterically broken. What is supposed to reduce the spped of the heat up of your beam actually increases it. Upgrades that should increase mining speed, reduces it. So in short, the default multi tool is as strong as it gets. Further upgrades to it will make a wooden pickaxe seem more viable.

PS4 Crashing – The game crashes to the PS4 main menu on several occasions. You must save the game constantly to maintain progression.

Ship upgrades aren’t plentiful –  There is a lack of ship upgrades in the game. This is a big let down as the there should be ships with much high inventory space in the ships.

Game does not over variance in your journey to the center of the universe – At this state of the game, there seems to be no point getting to the center as there is very little difference in terrain and life. Though weapon upgrades do get better.