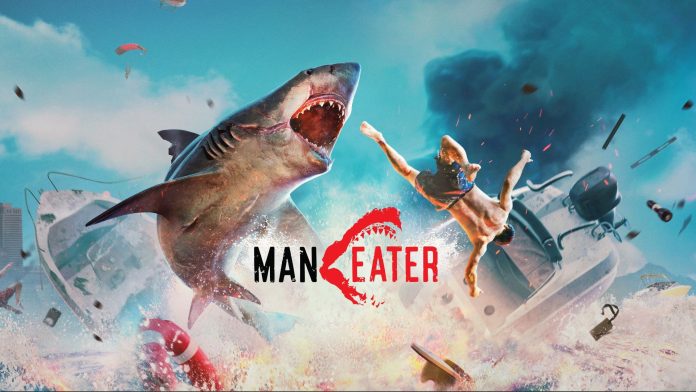 As the generation draws to a close, gamers are being treated to a wild ride when it comes to video game concepts. While early on in the generation we saw developers sticking to known and established genre tropes, recent trends have been anything but traditional. From Kojima’s ambitious Death Stranding to Panache Digital’s equally ambitious Ancestors. Now we are treated to the world’s first ShaRkPG, which as you might have guessed features the ocean’s apex predator – the Shark, as our protagonist.

Maneater has a story that would make the biggest B films blush with its cheesiness. While it is pretty straightforward and predictable, I quite enjoyed its style of delivery and jokes. The story plays out like a reality TV show/documentary following the exploits of the primary antagonist Scaly Pete after he kills your mother and leaves you defenseless. Chris Parnell of Rick & Morty and Archer’s fame does an excellent job of narrating the events of the game with great humor. Although there are some occasional repetitions in lines, I still found chuckling every time Chris threw out a random “fact”about Shark behavior.

Most of the missions are just go here and kill that, and even though you can choose the order in which you tackle your objectives, the story remains mostly linear. It took me around 13 hours to finish everything because I spent a lot of time exploring, but you should still expect at least 11 hours of gameplay.

With everything said and done, the story is obviously not the game’s strongest suite. It’s not a bad story when you consider the overall absurd premise of the game, but I do feel the story could have been a bit more interesting.

Now we come to the main course, the gameplay. Maneater allows you to live out the ultimate power fantasy – playing as a Shark. They are pretty much nature saying fuck it and dumping every known natural weapon onto a 20 feet 5000-pound killing machine that can swim as fast as 56 Kmph.

You start off as a cub though, and since your dear mommy was murdered by Pete, you are defenseless and hungry for more than just revenge. After getting used to the movement and basic attacks, you will then need to bite your way through the top of the food chain.

Although most of the other ocean’s residents are not a threat to you, there are quite a few creatures that will challenge your dominance. The animals that pose as a threat will depend on your size, from the crocodiles of the bayou to the freshwater to the terrifying Orca.

Something that I want to mention here is that while the game does a great job of making the ecosystem look diverse it misses out a huge opportunity in making it feel alive. None of the fishes or other animals seemed to interact with each other, and would only react towards me whether it be running away(or trying anyway) from me or chasing me down for a bite.

Maneater features a fairly big open world, filled with swamps, sea, beaches, and islands. After overcoming various challenges and taking down the zone boss, you meet the Apex enemy before moving onto the next zone. Although the game does allow you to tackle objectives in any order you want, you will be limited from reaching some of the harder areas until you grow up. This is to prevent you from facing greater challenges before you are unprepared. I feel like this could have been done a bit better by giving us the freedom of choice to explore in any order we want but being discouraged to do so by seeing upfront what dangers lie in deeper waters.

At the start of the game, you barely have any forms of self-defense and attacks and must rely on chomping down small fish to grow up. You earn XP and materials by eating other creatures, and the bigger they are the better your rewards. You can also find nutrient packs lying around which also gives you a fair bit of XP and nutrients. But most of the time the early game will be spent grinding your way up. Once you accumulate enough XP you can retreat to the grove, which acts as your safe house to level up and grow up in size. Once you get enough levels you will grow from a harmless pup to the terrifying mega-shark.

Once you grow big enough grinding becomes minimal and the world becomes your playground. I found myself chasing down boats, jumping ashore, and limping around tearing up terrified humans. Maneater also allows you to do the iconic “knifing” through the waters, with your fin being the only thing visible above the water as you menacingly chase down your prey. This is where Maneater shines the best, giving you total freedom to enact a murderous rampage on everything in your sight.

Combat however is a huge hit and miss. At times it does a good job of representing the frantic and frenzied attacks of these giant beats while at other times it can be frustrating. There is no camera lock, and the camera seems to betray you at the worst of times, focusing on the top of the sea bed when you are being bitten off by a bunch of crocodiles or getting stuck to some debris while you are swimming down low. Attacking other creatures is also something that takes some use some getting used to, especially if these creatures fight back. Most of your enemies have an attack pattern that you will have to exploit if you want to emerge the victor. Problem is, even if you do understand when to attack, your shark might completely miss the attack because some other critter decided to come in between you and your target.

The game is fun and it gives you a huge burst of adrenaline when you are locked in a duel with an enemy, and it gives you a really satisfying feeling when you finally manage to take down that predator that was bullying you a couple of levels ago but the wonky camera can take a lot of the fun away. The game doesn’t need a full lock-on system or auto-aim but a better and more focused camera would have greatly helped.

The game manages to look pretty good at times, bearing in mind that it’s intentionally supposed to be a bit on the cartoony side. Underwater, the game is gorgeous, littered with carefully placed items and objects such as sunken ships or barrels of nuclear material. Each region has a distinct look and feel to it, and you will very rarely find two similar-looking places.

The surface of the water however leaves a lot to be desired with, and it often looks murky and overall lower quality than expected. The debris on top of the water often doesn’t react when I swim by and it breaks the immersion a lot. It does look better in some areas than others but I do wish they could have done a bit more with the visuals.

In terms of audio, the game is overall well done. In terms of dialogues, almost of the voice actors do a great job. Another separate line of praise must be reserved for the quality of screams, the developers absolutely nailed the horror of being hacked apart by a wiggly fishy boy. The music reminds me of the older JAWs films and it really gets you in the mood for some murder.

Finally, in terms of presentation, the game mostly maintains a clean look when it comes to the UI, opting to keep the more detailed information in the menus. There’s are very subtle marks on your screen and compass to tell you where to go but other than that there are no distractions. No functionality is sacrificed however, and you will not find yourself fiddling around in the menus trying to figure out where is what.

EDITORS NOTE: A PS4 code was provided to us for the purpose of this review.