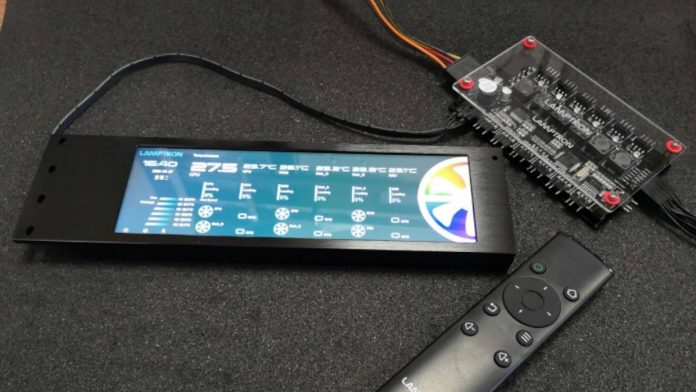 Lamptron has just announced a new fan and lighting controller, CU135, which will be a part of their flagship lineup. The set has a main control unit that you can easily hide behind the your case’s motherboard tray or in a drive bay, a display module that gets installed right under your graphics card and an RF remote control through which you can control the lighting and speed of the fans.

The main control unit has six digitally addressable 3 pin RGB headers as well as 4 pin PWM fan headers (36W of power per channel). It can also take in six 2 pin thermal diodes which are included in the package, along with a proprietary power connector for the display module. Power can be supplied to the unit using a 4 pin Molex or a SATA connector.

Then you have a 7.84 inch Touchscreen LCD Display in which you can view the fan speeds, voltage in which they are running and temperature of all the devices you have connected to the Main Control Unit and it’s far better than Lamptron’s SM436.

Using the touchscreen you can even set color and lighting effects for each of the six lighting zones, set up fan curves for each of the six fan connections, and read the temperature from the six external sensors. The RF remote control included with the CU135 allows you to do all these without having to reach for the LCD Display. The CU135 can even take in 3 pin ARGB connection from your motherboard, so you can copy lighting profiles over from your control software.
Dimensions of the CU 135 according to Lamptron is 121.5mm × 72.5mm × 21mm and of the display is 360mm × 70mm × 12.5mm, which takes up 3 expansion slots in the case. The units are going for retail in and around $200 US excluding tax.