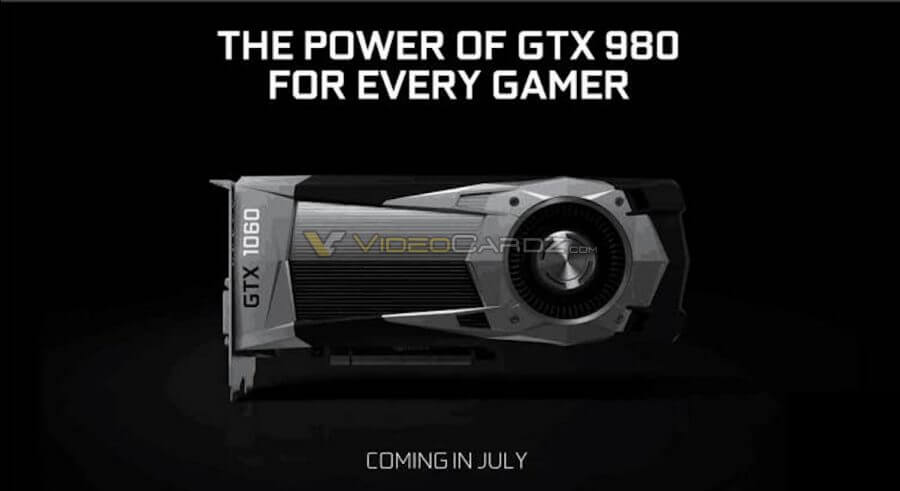 nVidia today lifted the shroud off the GeForce GTX 1060. The much anticipated GPU will be targeting the budget gaming market with the sub-$300 pricing. A lot of leaks already suggest that the card is all set to outperform the RX 480 by a margin of nearly 15%. If nVidia’s claims are true, the card will also vanquish the GTX 980 with a launch price nearly half of the GTX 980 ($549). All in all, the competition in the mainstream consumer market seems to be gathering a lot of friction and nVidia are planning to lock horns with AMD without any half measures. If the card does live upto all the hype and the claims made by nVidia, we can be fairly certain that the RX 480’s sales will tank by a reasonable margin, a GPU that has been selling out at a blazing pace because of its magnificent Price / Performance ratio. The nVidia GeForce GTX 1060 will be available on 19th July across the globe in both reference and aftermarket variants with the pricing of $299 for the Founder’s Edition (Reference) and $249 for others.

The GeForce GTX 1060 is based on the GP106 Pascal architecture with a node size of 16nm using FinFet technology. In comparison to its predecessor – the GTX 960, the upcoming budget champion will sport 1280 CUDA Cores, 6 GB of GDDR5 memory, a 1506 MHz core clock with a boost clock of 1708 MHz and 4.4 TFLOPs of compute performance. The card equips a Texel fill rate of 159.6 GTexel/s and a pixel fill rate of 72.3 GPixel/s. In addition to this, the memory is adorned with a 192 Bit wide bus which equates to a total of 192 GB/s bandwidth. The much talked about 3 GB variant was not mentioned by nVidia and through this we can extrapolate that their will be another card within the sub-$200 price bracket with the aforementioned frame buffer.

The TDP of the card is another talking point as nVidia have only included a single 6 pin PCIe power connector, the reason behind it being an astoundingly low TDP of 120W. Bear in mind that TDP and power consumption aren’t analogous terms and shouldn’t be muddled with each other. Albeit, if indeed the TDP is close to the real world power consumption of the card, it would mean that even a single 6 pin connector should be enough for some heft overclocking ignoring the fact that Pascal chips are clocked to the ceiling straight from the factory.