Dragon Quest XI is the latest entry in the long-running JRPG series from Square Enix. It is a gorgeous RPG that harkens to the golden age of RPGs, with its masterfully designed turn-based combat, meaty storyline, and colorful art style.

Dragon Quest XI marks the series’s return to its singleplayer roots since X was an MMORPG and it is a triumphant return.

The protagonist in Dragon Quest XI is the reincarnation of the Luminary, a legendary hero who is prophesized to save the world of Erdrea from the Dark One. 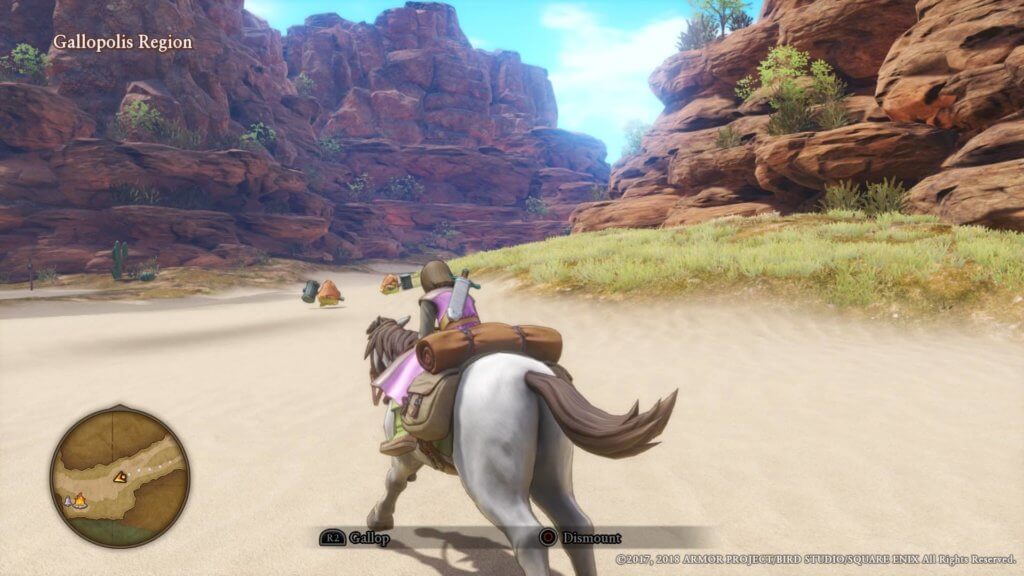 Set in the beautiful and sprawling land of Erdrea, Dragon Quest XI has some of the most well-designed environments that I have seen in gaming. From the desert kingdom of Gallopolis to the Venice like city of Gondolia, Erdrea is filled with diverse landscapes sprawling across in all directions.

You can traverse the entire world on horseback or on foot, searching for loot which is littered throughout the map. Unlike older JRPGs, all enemy encounters on the map are not randomized, instead, you can see them roaming around in the world. In typical Toriyama style, these monsters have distinct cartoony designs that we have come to expect from him.

Combat is turn-based and tactically deep while simultaneously being simple with tried and tested mechanics. You have the standard attack, defend and use item options, and while you can manually control each and every character, and I recommend you do that in Boss battles, trash mobs can be dealt with the tactics mechanic. Similar to the gambit system in Final Fantasy XII, tactics allow you to pre-program individual characters in your party or set your entire party to fight in a particular style and the AI will take care of the battles for you.

For example, you can set Serena to focus on healing while setting your hero, Sylvando, and Jade to go on all-out attack. If things go south, you can quickly change tactics or take back control. 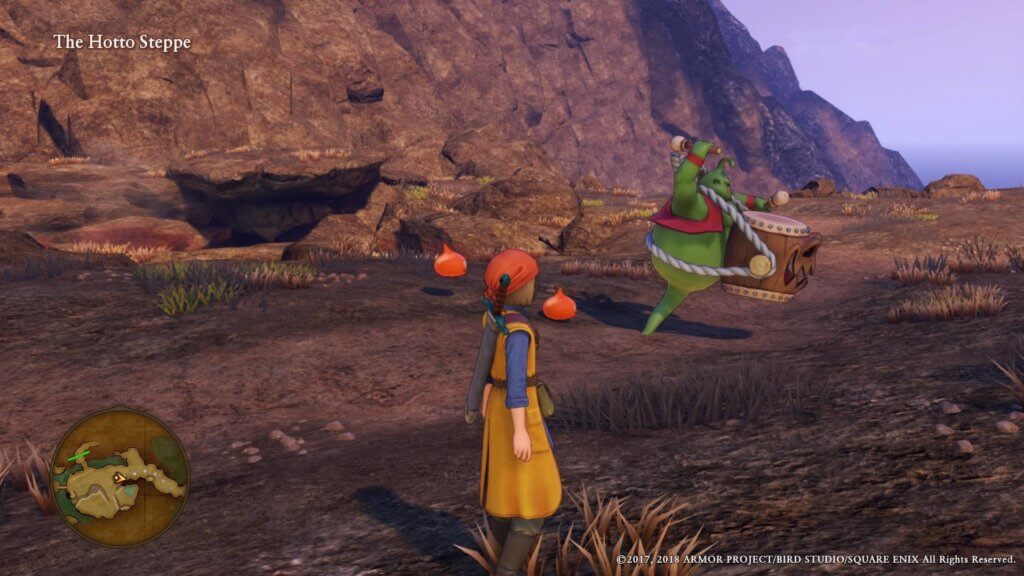 Defeating monsters nets you XP, gold and sometimes loot. You can spend your XP in the character build menu, while the gold can be used to buy items.

You can also craft equipment from the forge in camps with loot you get from the environment or from defeating enemies.

Your party does not have any job classes like most traditional JRPGs such as the older Final Fantasy or Dragon Quest games. Instead, they have a set of skills with branching upgrades available. Each character has a particular skill set that they excel in, a particular role which they fulfill best and you can mix match them to create a well-balanced party. While this might seem like limiting, it is actually deep with multiple combinations of combat style.

Every character in your posse has a certain dynamic with another character, with the exclusion of Sylvando, who is kind of like the Joker card in your deck and can complement any other character. This dynamic is brought out with the help of “pepping up”, which basically buffs the pepped up character with bonuses like improved defense, critical rates. And if there is a compatible character in your active party then you can use your pep power which is a powerful attack that uses up the rest of your pep meter. 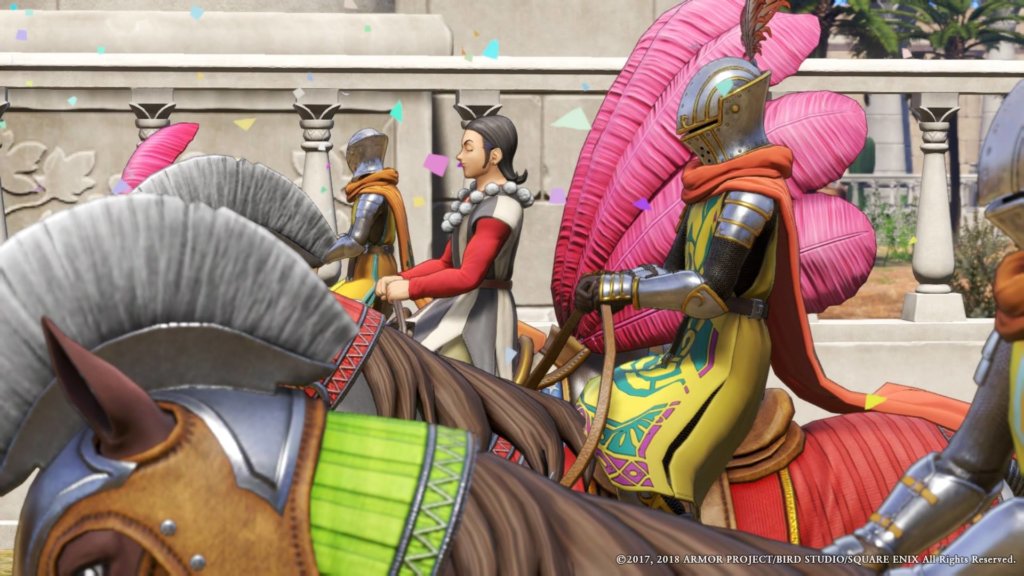 The visuals in Dragon Quest XI are strikingly beautiful, with vibrant colors, detailed cartoony characters, and well-designed animations. The cutscenes did a great job of conveying the story, and at times I felt like I was watching a pre-rendered CGI movie.

The towns and environments are also gorgeously crafted with an attention to detail that created a world that I truly felt immersed in. The sheer scale of towns filled with distinct locales and NPCs to interact in this game made me feel like I was actually in a thriving, living location instead of just a place for me to sell my loot.

The variety isn’t just limited to environments, even monsters are varied and differ from one environment to another. Ever monster has different strengths and weaknesses that you can sometimes identify from just looking at them. 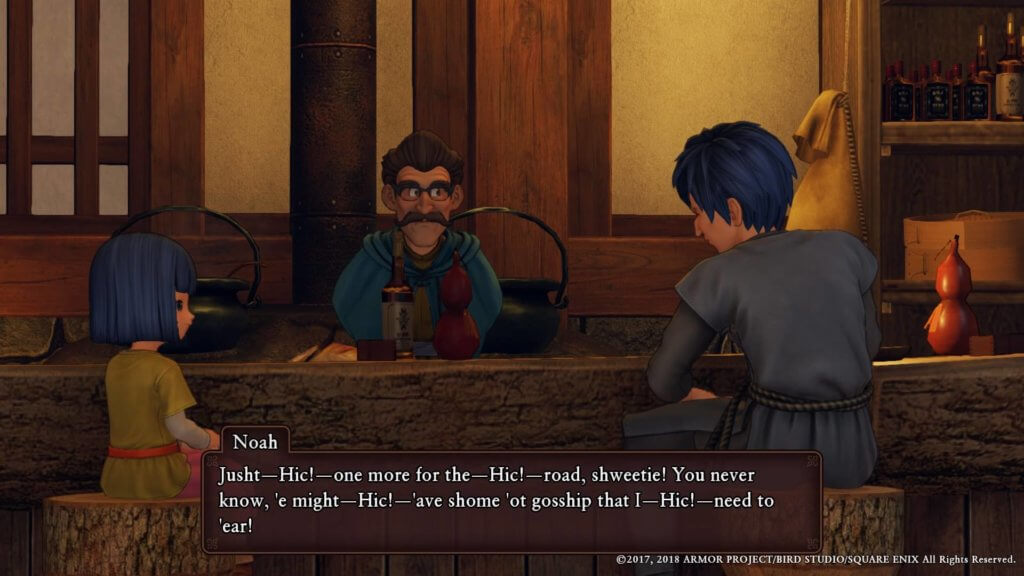 Most importantly, your entire party is composed of characters who have distinct personalities and well developed back stories which creates a certain depth to them that brings them to life.
Spending time talking with your party in campsites and via the talk option allows you to bond with them and the way you meet every party member leaves a strong and lasting impression on your member.

I typically have favorite characters that I really like and characters that I don’t like in party-based RPGs, but over here I liked each and every one of my party members – the thief Erik who you meet early on in the game, the mage sisters Veronica and Serena, the two martial artists, Jade and Rab and the quirky Sylvando. There are very few NPC characters in modern gaming titles that leave a lasting impression on me, but Dragon Quest XI manages to make me care about each and every person that I met on my travels.

And it’s important that you like the people in your party because you’re going to be spending a whopping 80-100 hours(the latter if you are a completionist like me) with them if you want a taste of everything Dragon Quest XI has to offer.

That is, assuming you don’t get addicted to the absolutely insane mini-games on offer here, like the casino minigames which can be a spin-off game on their own. It’s applaudable that Square Enix has managed to create the plethora of content while managing to not dilute the multiple game mechanics in DQ XI.

The music has been composed by veteran Koichi Sugiyama and features a beautiful soundtrack compliments the game in every aspect with its orchestral music that brought back sweet memories from my first time playing Dragon Quest on my PS2.

While the voice acting is mostly on point, and the localization team has done a great job, I felt that some voices were a bit off and did not go well with the character but it’s a very minor gripe.

With its gorgeous visuals, memorable soundtrack and band of well-developed characters, Dragon Quest XI manages to become a stellar addition to the legacy left by its predecessors.