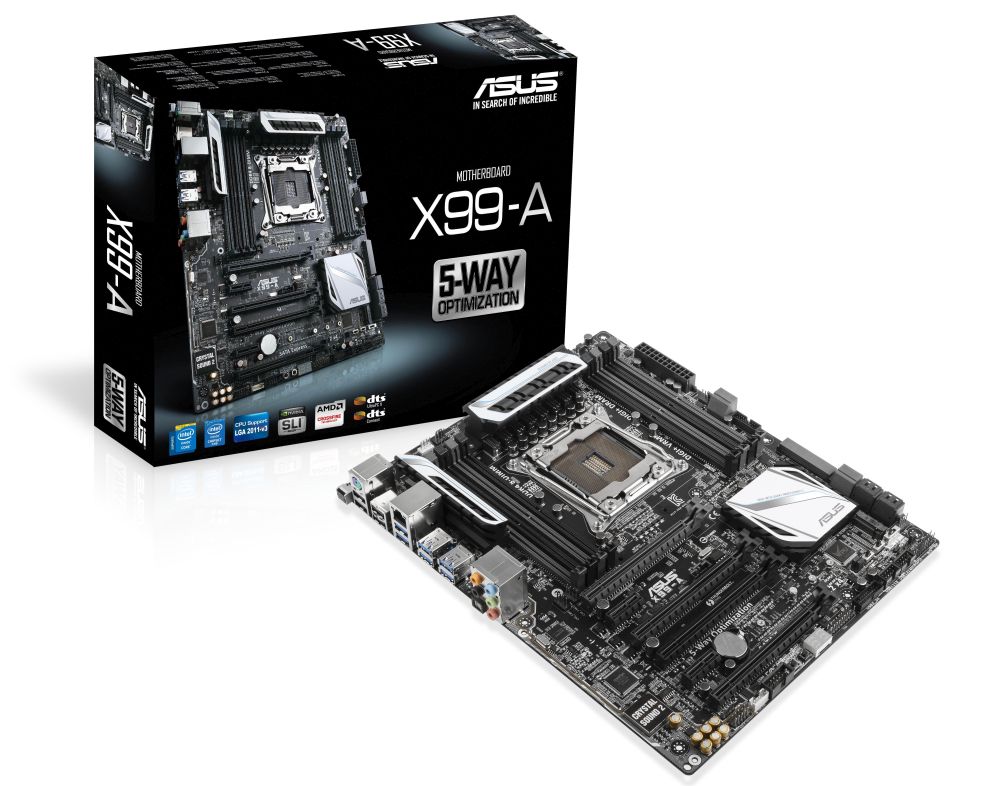 From the inception of Intels X99 chipset there’s been a constant battle between the motherbaord manufacturers to bring out more boards than the other by mixing and matching different criteria. While other companies at times have a very confusing lineup Asus has their X99 motherboard lineup neatly lined up, they have

We already got our first taste of the Asus X99 setup with the X99-Deluxe, today we will be checking out its younger brother X99-A.

The X99-A is targeted towards those user who just want to get their feet wet with Intel’s HDET platform without burning a massive hole in their pocket. 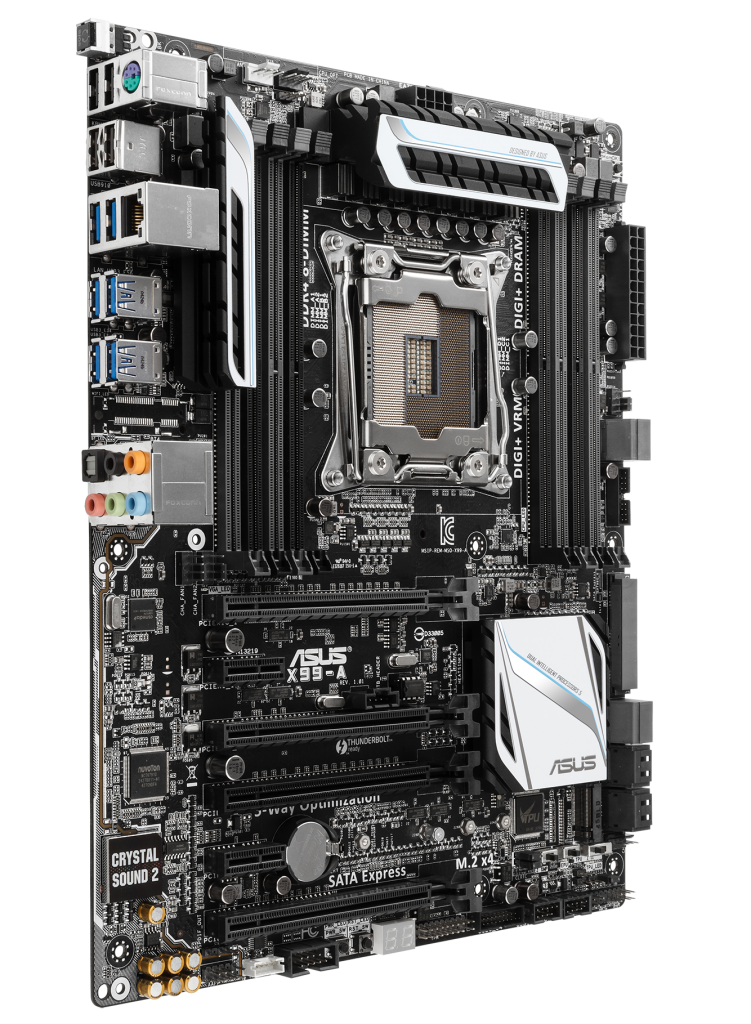 One interesting inclusion from the the X99 Deluxe is the EZ XMP switch which allows to run XMP timings without even touching the BIOS.Gaming or PCIe Coprocessor wise this board is armed with full PCIe 3.0 x16/x16/x8 configuration.

Storage wise we have 10 SATA ports from the PCH – six of which are RAID capable, the remaining 4 are from a secondary controller so they don’t have the RAID capability.Adding to the sata ports we have one Sata express port with RST enabled and a M.2 x4 Gen 3.0 port. The SATA Express shares bandwidth with the PCIe 2.0 x4 slot whereas the M.2 is switched with the final PCIe slot.

Coming to USB side of things we have 10 USB 3.0 ports among them 5 comes from the PCH,three from an ASMedia hub and two from the ASMedia controller.

Exclusion of multicore turbo is a bit of a downer but that can be easily fixed by flicking the TPU switch for a 3.9GHz overclock.The Audio remains the same with the Crystal Sound 2 whihc is pretty powerful for an on-board solution. And lastly we have Asus Software and Bios implementation which is undoubtedly better than the competitors as of now. 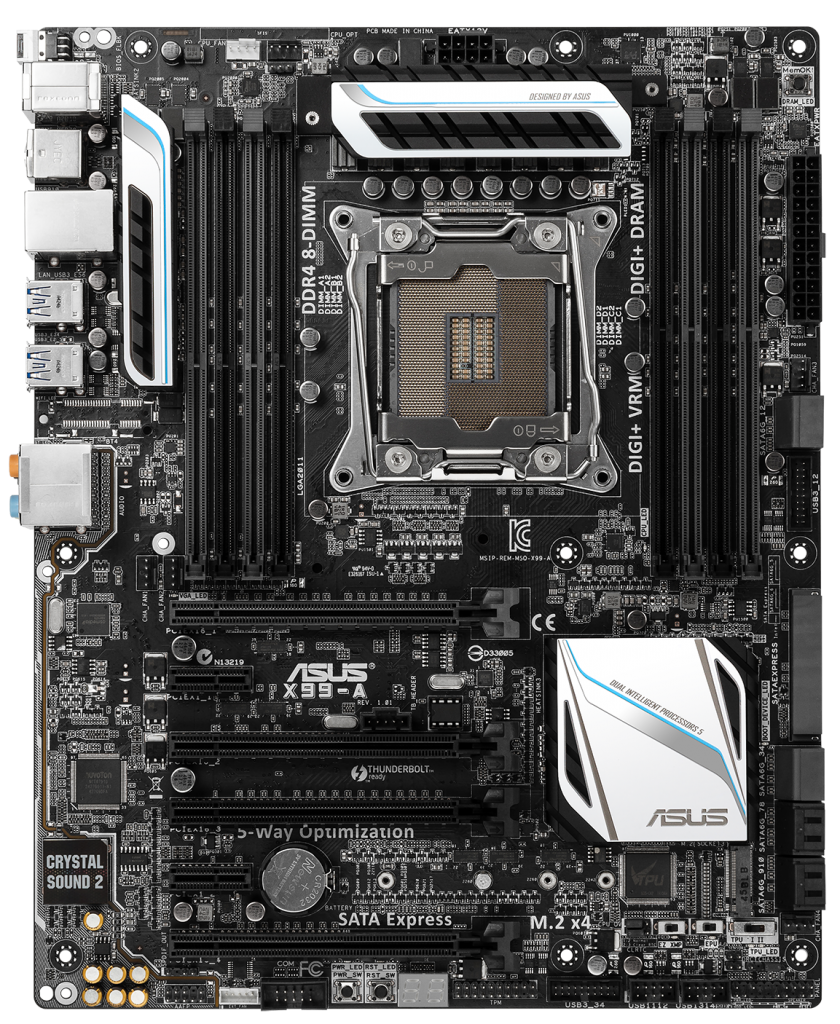 The X99-A retains the white and silver livery form the Deluxe although the effect is somewhat limited since the board has three separate small heat-sinks.

The X99-A has a different PCB and a reconfigured slot layout than its bigger sibling.The electrical components seem to be the same, but their placement is different. For starters the m.2 has been relocated to a more convenient place in the bottom left.

Coming to the CPU area we see a pretty busy state of affairs, the CPU has access to five of the fan headers – two 4-pin CPU headers in the top right, two chassis headers to the bottom left of the left DRAM slots, and another just below the 24-pin ATX header, the final fan header is just below the sata ports near the TPU switch. The board also has a FAN_EXT header for fan extension cards on the bottom of the board.

Along side the Dram on the right hand side we have the MemOK button whihc takes care of and memory related problems during POST. Below this is the 24 pin ATX power connector and a fan header followed by 2x sata 6GBPS ports these followed by the next four in gray are RAID/RST compatible, while the last four black ports are from the secondary AHCI controller and they  are not RAID/RST compatible. The middle grey sata ports doubles up as sata express connectors. 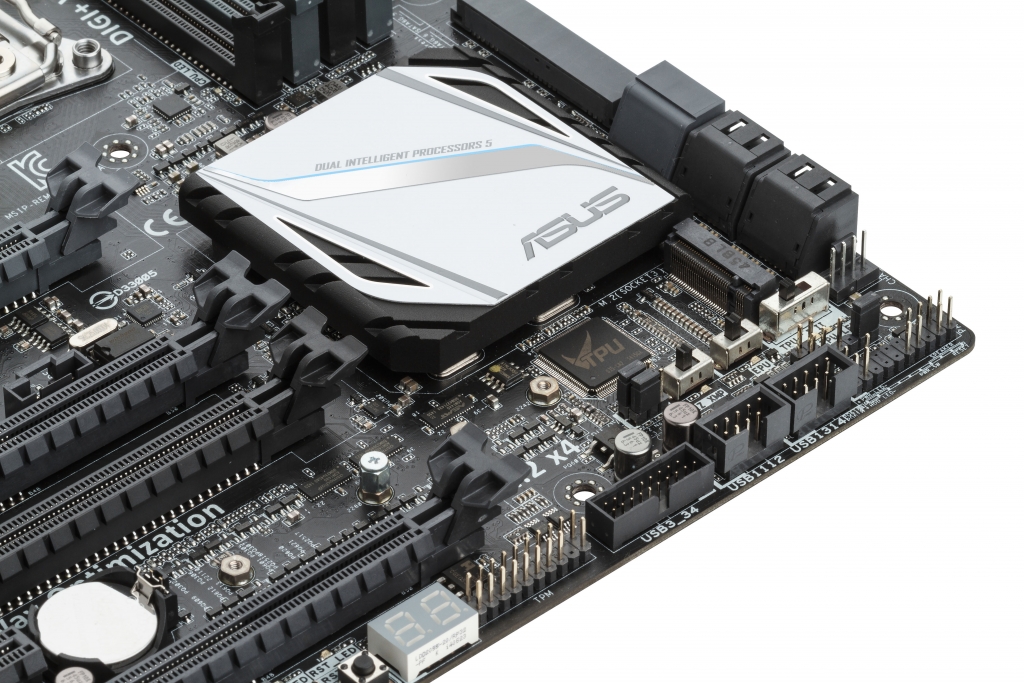 Coming to the lower right corner we find the X99 PCH underneath a white heatsink. Below the heatsink is a M.2 x4 Gen 3.0 slot, supporting 2242 to 22110 sized drives. Below that is the EZ XMP switch, EPU and two stage TPU switch.

Coming to the audio side of things we have Asus’s Crystal Sound 2 audio solution whihc is an upgraded ALC1150 solution featuring PCB separation,EMI shield and filter caps for the front panel audio. 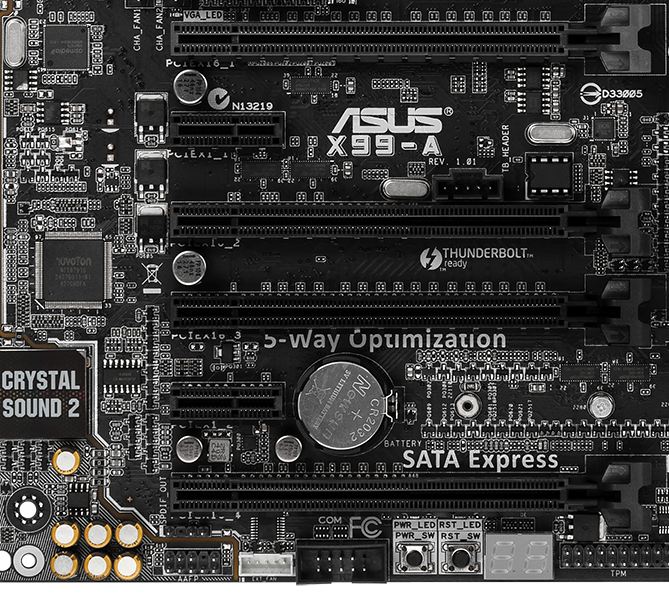 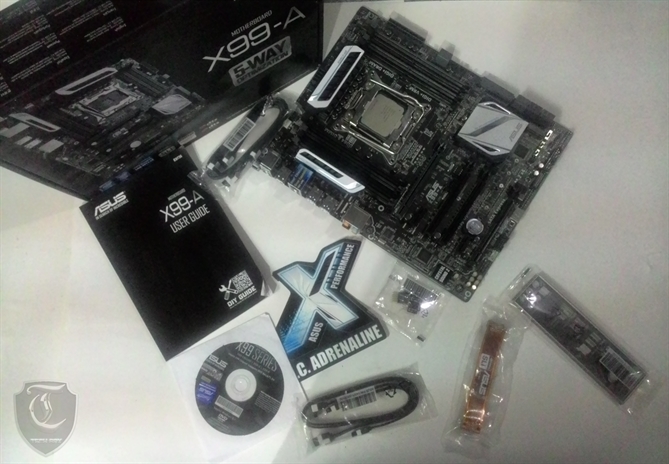 We started with a small overclock of 3.9GHz and gradually worked our way to 4.4GHz after which keeping the system stable became somewhat of a problem for our test suite.

The algorithms in 3DPM employ both uniform random number generation or normal distribution random number generation, and vary in various amounts of trigonometric operations, conditional statements, generation and rejection, fused operations, etc. The benchmark runs through six algorithms for a specified number of particles and steps, and calculates the speed of each algorithm, then sums them all for a final score. This is an example of a real world situation that a computational scientist may find themselves in, rather than a pure synthetic benchmark. The benchmark is also parallel between particles simulated, and we test the single thread performance as well as the multi-threaded performance. 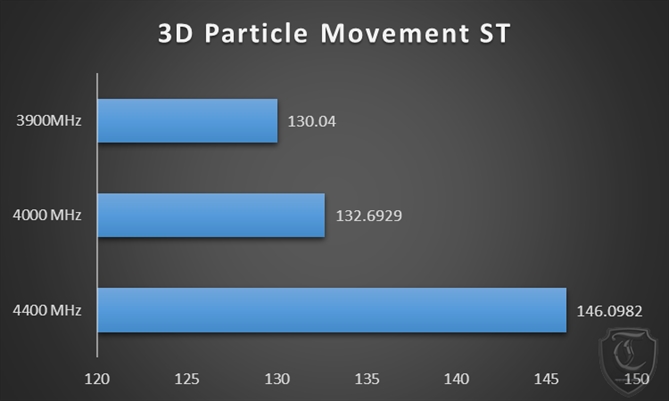 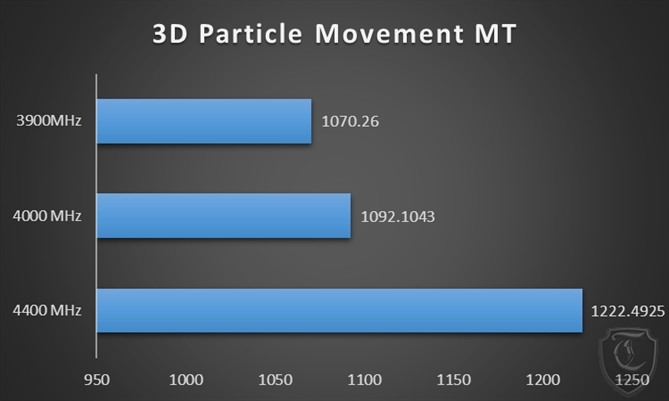 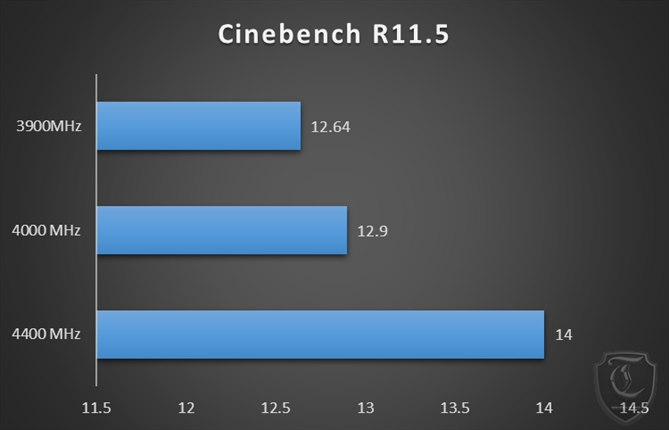 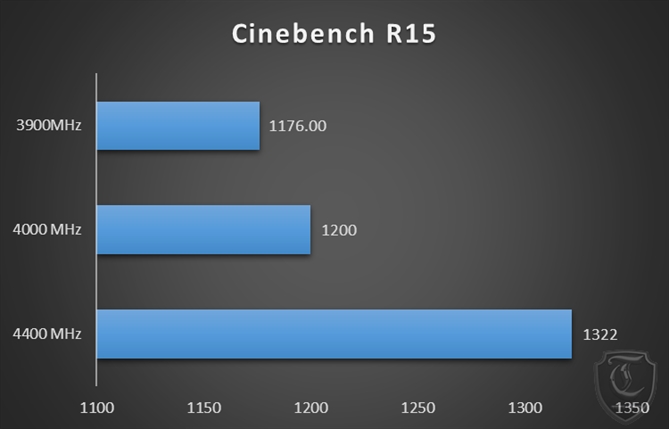 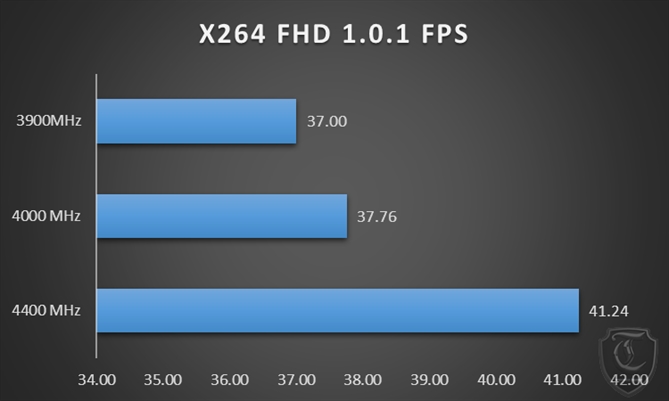 WPrime v 1.55
wPrime uses a recursive call of Newton’s method for estimating functions, with f(x)=x2-k, where k is the number we’re sqrting, until Sgn(f(x)/f'(x)) does not equal that of the previous iteration, starting with an estimation of k/2. It then uses an iterative calling of the estimation method a set amount of times to increase the accuracy of the results. It then confirms that n(k)2=k to ensure the calculation was correct. It repeats this for all numbers from 1 to the requested maximum. 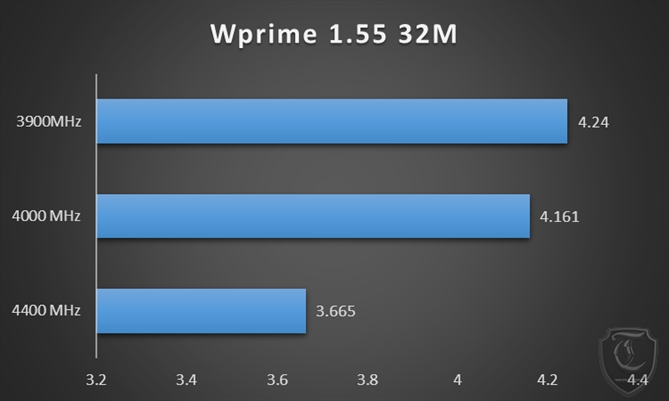 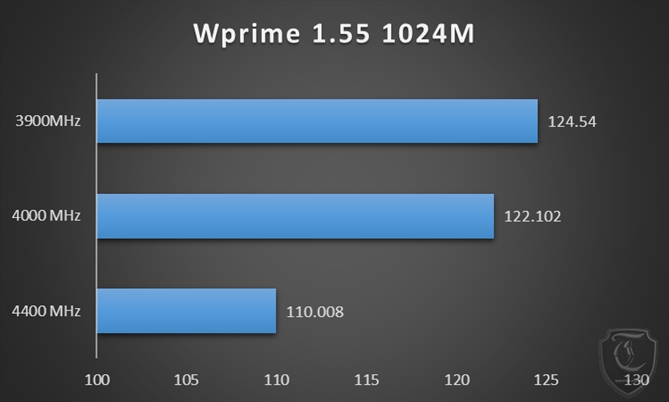 Super PI is a single threaded benchmark that calculates pi to a specific number of digits. It uses the Gauss-Legendre algorithm and is a Windows port of a program used by Yasumasa Kanada in 1995 to compute pi to 232 digits. 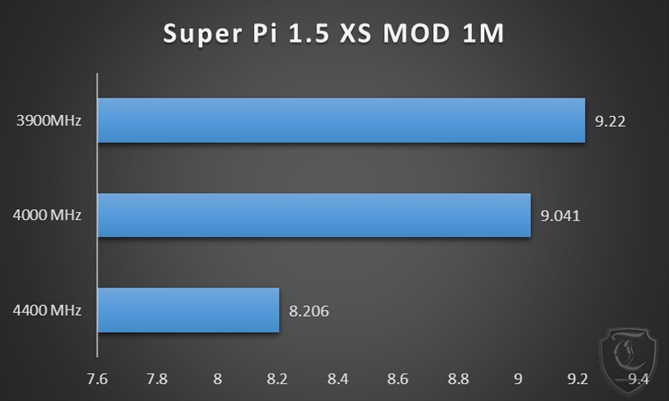 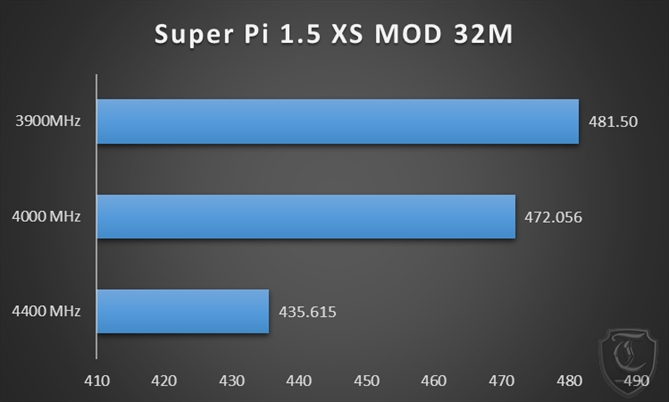 POVRAY
The Persistence of Vision RayTracer, or PovRay, is a freeware package for as the name suggests, ray tracing. It is a pure renderer, but the latest beta version contains a handy benchmark for stressing all processing threads on a platform. 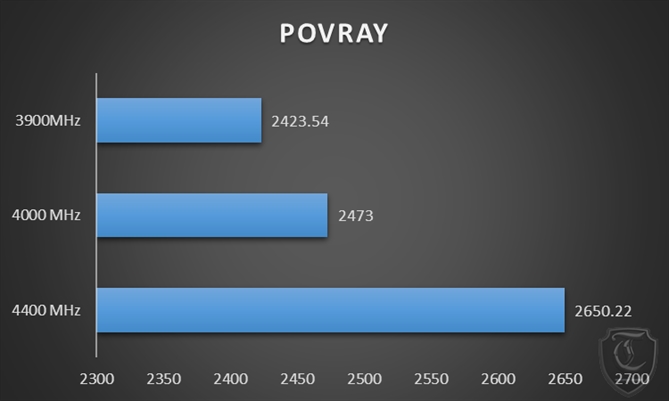 3DMARK 11
Developed by Futuremark 3DMark is a mainly used for gpu benchmarking however 3DMark 11 scales pretty good with cpu speed hence it is a very good indicator of CPU performance. 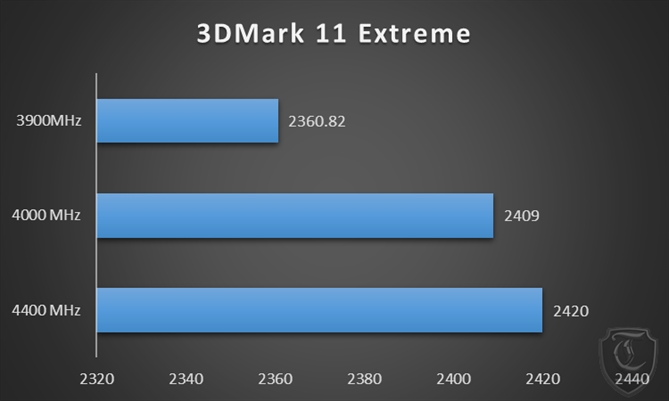 PCMark 7
PCMark is a computer benchmark tool developed by Futuremark to test the performance of a PC at the system and component level. In most cases the tests in PCMark are designed to represent typical home/workstation user workloads. 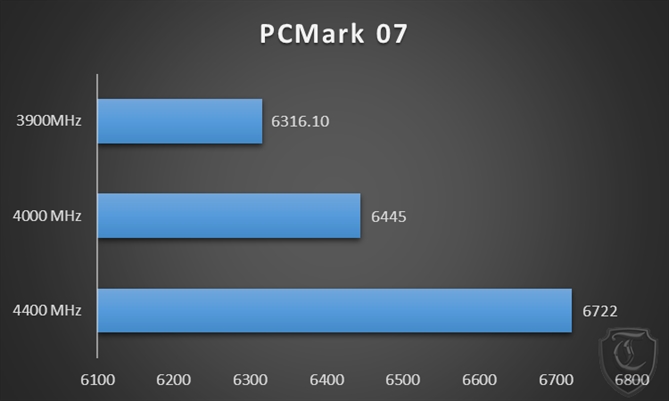 Starting from this review we will provide performance data for the storage subsystem and general DPC latency of the motherboards we test. Since the database in its initial stage the values are given in form of a table. We will keep adding values as we test more motherboards.

The term “budget” is very subjective, for an HTPC user it might mean a entry level cpu with integrated gpu, for a gamer it might mean a pairing of core i3 with a budget GPU. For an X99 user however the term is very hard to define since there is no “budget board” for this niche. the platform already has a lot of features to play with so the end result is already a bit expensive.

In X99 niche therefore budget means sub 25K range motherboard paired with a sub 30K Core i7 5820K along with 8/16GB DDR4. Almost every manufacturer has some board aimed at that range and likewise Asus has the X99-A.

Now if we take a look at the X99-A, we have a board which has 10 SATA ports, 10 USB 3.0 ports,three way PCIe at x16/x8/x4,M.2 Sata running form PCIe and sata express along with a somewhat beefy 8 Phase VRM for a stable overclock. Add to that a decent Audio subsystem and an Intel Lan and we have a complete package with the EZ XMP button. And we shouldn’t forget Asus’s exceptionally good BIOS and Software which makes it an all round easy to use system.

For someone who is trying to build a no frills X99 system the X99-A is the board to go. The only competition comes to X99-A comes form the X99-Pro which adds a few more connectivity options. So at the end of the day its a matter of choosing between what you want and how much can you shell out.

A damn good board for its price.