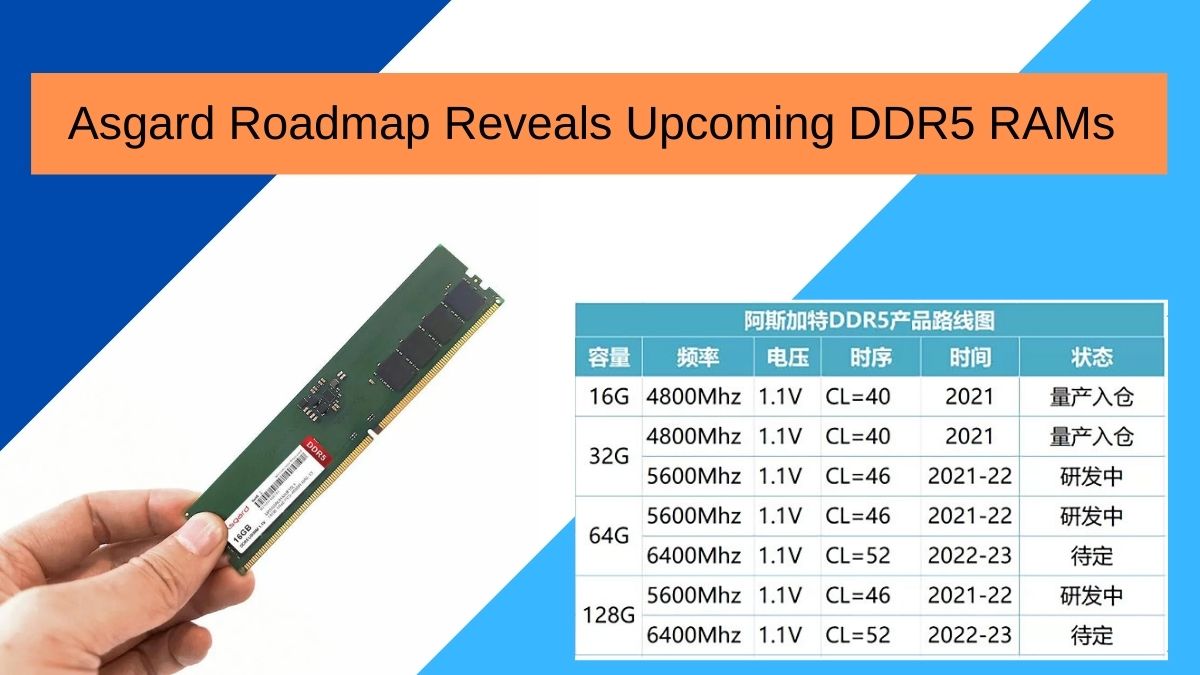 Asgards roadmap shows their upcoming plans for DDR5 32GB, 64GB and 128GB 6400MHz memory modules and even more faster memories for the future.

Asgard is also preparing 16GB and 32GB DDR5 4800 memory modules with 40-40-40 timings and 1.1V TDP. These are early releases of DDR5 memory modules so they are not as impressive. As always, we can expect the technology to develop with time and faster kits will be made in much higher capacities.

Asgard is a gaming-oriented brand named after Norse mythology and it is owned by Jiahe Jinwei. We did cover Jiahe Jinwei and Netac’s first in the market DDR5 RAMs previously.

Memories Made by Asgard run at 4800 MHz and it is the standard speed for DDR5 memory which will be supported by the upcoming 12th Gen Intel CPU(Alder Lake) series in future. We can expect to see DDR5 go to 8400 MHz. But we cannot expect such high speed memories to be developed very soon.

Also Netac has its sights set on eventually releasing a 10,000MHz DDR5 memory kit, though no date has been set so we cant expect this to happen much late. This insanely fast memory will surely bring some serious performance improvements. For the sake of comparison HyperX did reach a DDR4 overclocking world record, with a kit of its RAM hitting 7,200MHz with the benefit of liquid nitrogen (LN2) cooling to keep things under control.

According to a roadmap published by IThome, Asgard is currently been working on the development of faster 5600 MHz DDR5 memory modules. Also, the capacity per module can be from 32GB, 64GB and to as high as 128GB capacities but with a CAS latency of 46 cycles. Asgard has 6400 MHz memory kits for launch under their roadmap as well, but they expected after or in late 2023. The advantages of DDR5 shows in its efficiency as such high frequency memory speeds are also expected to run at a voltage of just 1.1 volts just like the current DDR5 meories announced.