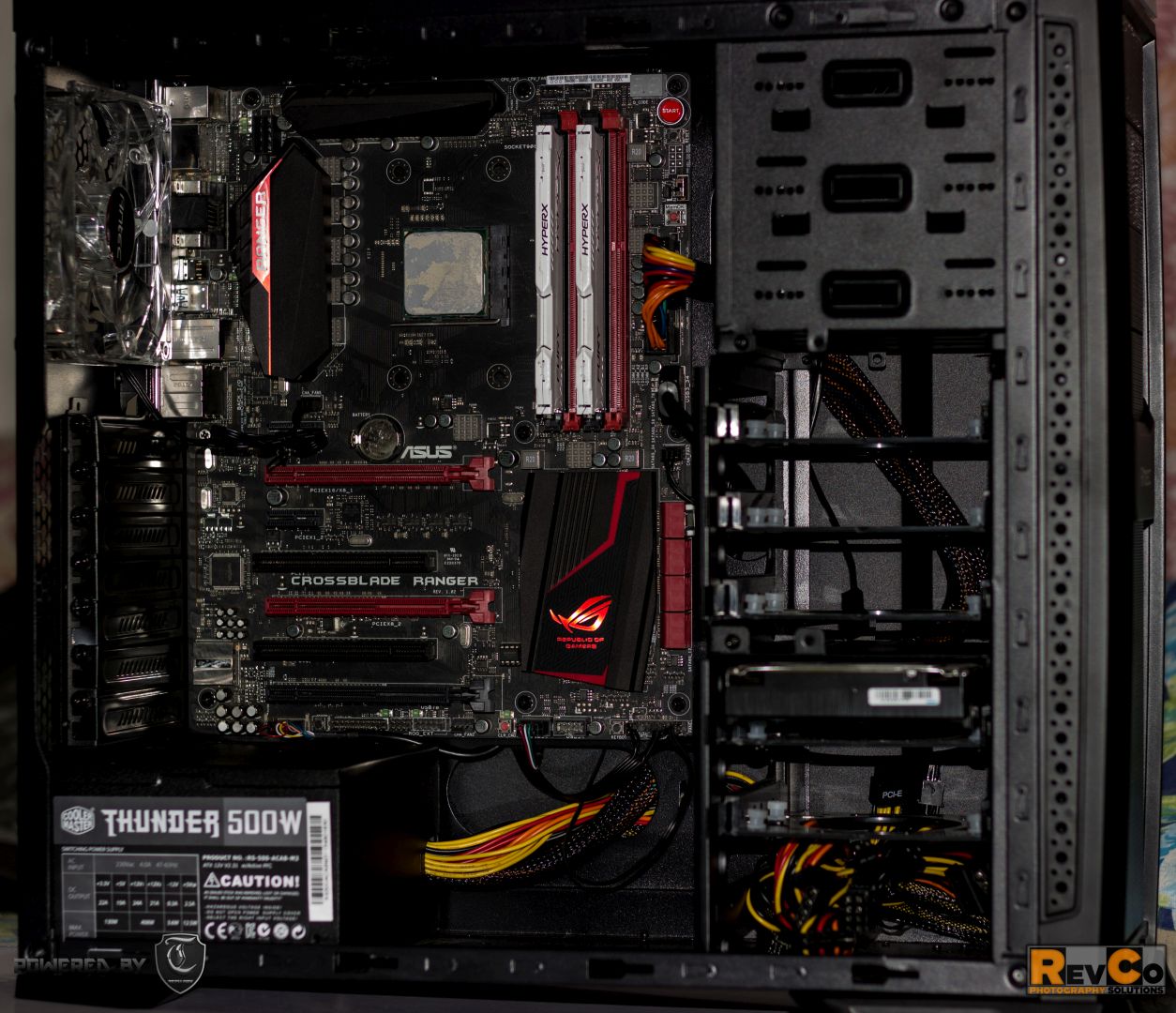 [Disclaimer :  Title caption not to be confused with the Born of Osiris track of the same name.]

When one hears the words “Budget”, & “Entry level”, it’s pretty hard to get excited about anything. Be it a once-premium,now entry level, value-for-money-product like an Intel Core i5 2500k, or an AMD/ATI Radeon HD 5870, anything with the aforementioned tags makes demoralization so very easy. But, there’s always the inherent enthusiasm that comes with getting my hands on similarly tagged products from the stables of Antec, because, for instance, where else would you get a better freemium experience? 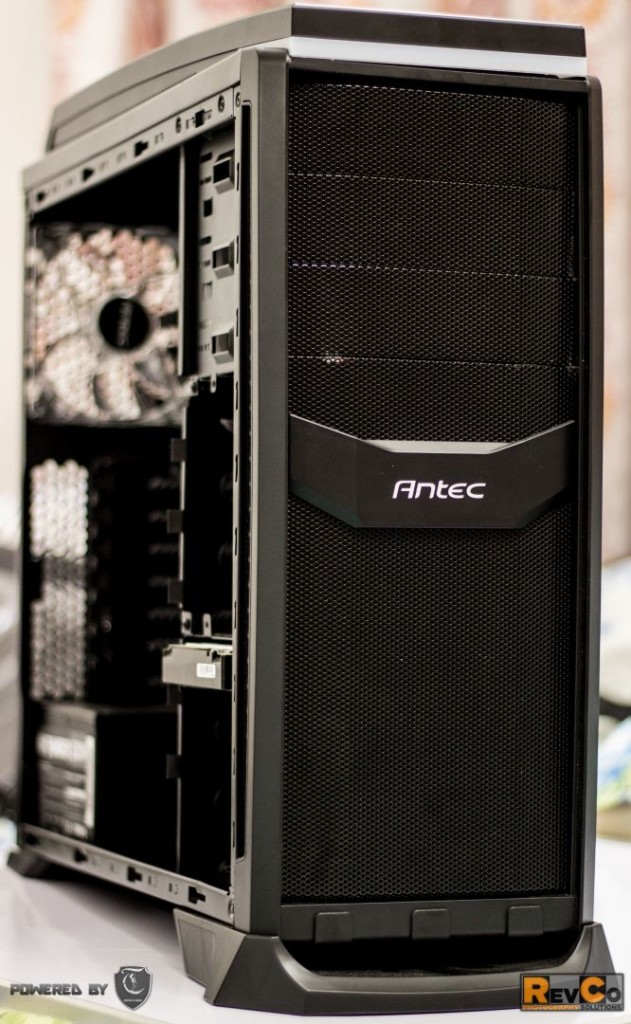 The Antec GX 300 Windowed PC Case is what I’d call “Pretty”, but then most people call a Master Case pretty so I guess the aesthetic quotient stays invalid here.The case is entirely black and sits slightly at an angle, due to the front stand, giving the chassis a distinct posture. Overall the paint job comes off as being pretty good, as the plastic and metal elements don’t look different in terms of coloring. Speaking of materials, the GX300 is almost exclusively monochromatic steel and plastic, which is used mainly for the panels and stands. The grayish-black theme spreads throughout the outer periphery of the case and the insides fare similar, a testament to the fact that this still is, at heart, a budget spec PC case. The front panel has mesh grill vents all over it and openings on the sides are left to supply fresh air for the optional 2 x 120 mm front intake fans. It’s a standard fare mid-tower enclosure, with room for ATX, m-ATX and mini-ITX motherboards, up to three dual-slot graphics cards maxing out at 400 mm long a piece, a 140 mm CPU fan, and up to 6 3.5″ or 2.5″ drives. The Power supply unit is to be mounted at the bottom of the case and the case allows for adequate thermal dissipation via multi-chambered lateral air-flow. The case also has slots for three 5.25″ optical drives at the front, which our turbanized folks from the land of overheated systems and hyperactive disk retailers might heave a sigh of relief for.

Taking a look around the case , it’s actually a swell sight. The build quality is cheap,yes, but it’s good enough for a case in this price bracket. Both side panels are extruded to make the case slightly more spacious on the inside, seeing as a the market for higher grade CPU coolers has been steadily rising and for said cooler that sits high up to be installed and space for cable management  still maintained effectively, adequate space for all the aforementioned features is always a must have. The top panel has a few utility openings as well, for the exhaust air, and is entirely made of a mesh grill. Examining the top panel further,  I found the integrated fan controller right next to the drive bay, audio jacks, reset and power switches, which are actually quite tactile and easy to press, a first for any entry grade Antec case I’ve ever come across. The front and back stands are reliable and provide enough grip for the case, and they seems to complement the overall “freemium” look of the case. They’re made of hard plastic and have a distinct, non-slippery material attached to them to absorb vibrations, and to ensure that the case won’t wobble around. As I’ve said before, the case slopes down the front end, and this is facilitated by the front stand which maintains this angle. Nonetheless, it gives the GX300 its own,signature look and, I for one, quite approve of this design parameter. The stands are secured by four small screws and the case’s rear feet share similar dimensions as well.

Going into the interior of the case, the first step’s always removing the left side panel and digging inside, not that it isn’t obvious already what’s in there. The interior of the GX300 is quite familiar to the GX500, an older case with similar specs. Antech did provide a niche little nylon bag with all motherboard accessories included. The smaller bags carrying the always ready to be overlooked parts are carefully labeled and all the screws are black to fit the theme of the case. Non-reusable zip ties are provided, although why they’d add those for a single build is beyond me. Rubber protectors are provided for the USB ports and audio jacks, which is a nice touch, although the lack of rubber grommets is a bit of a minus. 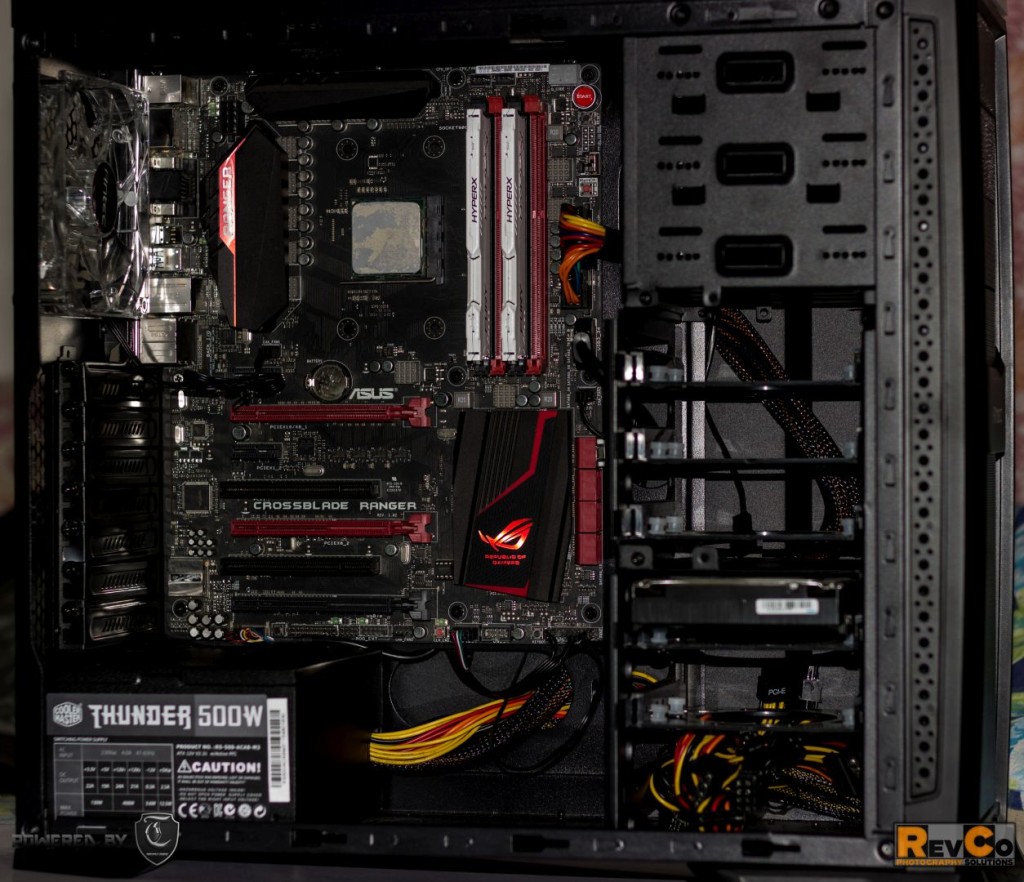 Upon dis-assembly, one could observe that all the durability that the case could account for from visual impressions alone falls a bit flat. The overall build quality is slightly above satisfactory, not because case components would crumble or bend, but because there are places where the metal is incredibly thin, almost paper thin. That, as you can imagine leaves a bit of a bad impression on people such as yours truly. Rest assured, the case will endure the hardware constraints one could attribute to it, and everything one could put inside will sit comfortably, and it will do it well, but a good enough build quality is one of our main hardware evaluation criteria and all we want is see that what we, as the general consumers, get are things that are well simply well built overall.

The fan included with the GX 300 is a 120mm, low profile case fan with a standard 120mm x 120mm x 25mm frame, a black 3-pin cable and is also painted black to match the interior plus the exterior color coating. It’s got 7 blades with a slight, but noticeable curve to each, to provide a nice and steady airflow, doubling out as the case exhaust. The fan is attached with standard fan screws, however there’s an itsy-bitsy detail that i almost overlooked the first time around – there are rubber pads running along the periphery of the fan housing module, which will absorb any and all vibrations passing from the fan motor to the metal chassis. Sadly this was the only included fan inside the case box, so expect the performance to be south of enjoyable, as the GX 300 would’ve benefited from the inclusion of a second fan as a part of the front intake section. Speaking of additional fans, the GX 300 can be equipped with four extra 120mm fans — two 120mm ones on the top and two more at the front. All that, including the 120mm at the rear, brings it to a total of 5 fans capable of being placed inside for maximum thermal benefit, specifically when trying to bypass the occasional thermal spikes that come as an occupational hazard during overclocking.

Proceeding further, the top panel is held by four short screws and has a dust filter installed right under a mesh grill that looks like something straight out of Compton. Down south, one can find the I/O cables, fully black and long enough to provide necessary flexibility whilst being sturdy enough to not break apart altogether. The fan controller included here is powered by a single, 4-pin molex connector and has two 3-pin fan connectors available, with a second molex connector also present, used for the LED strip on the front.

On to the final bit — the HDD cage, or at least part of it. There are two positions for installation, however I find it quite difficult to comprehend the exact purpose of that. In the original position, there are three slots that can be fitted with 3.5″/2.5″ drives as the rails for them go directly in, but in the second, narrower position, neither of the rails for a 3.5″ drive can go in, nor could ones for a 2.5″ drive. The only upside to this, that I can think of, is the extra space it creates for putting in a longer, 2-3 fan GPU.

With that last bit out of the way, I do believe it’s time I wrote down a conclusion to all this talk of this curious little case.

It didn’t blow my mind, but I can’t say that it’s a bad case either. I’m pretty sold on my assumption of getting better performance out of the case if more fans are installed, since it actually will be a huge improvement, what with the whole airflow path being different scenario. Not to mention that there are other GX300 variants with two fans included, so expect base performance to vary across all versions. Also, given the relatively low price tag of the case, it could be equipped with multiple, additional aftermarket fans to guarantee a steady, cool environment for the hardware inside.

As I’ve mentioned before, the case looks very different from your regular market niche and that’s a good thing. The slightly angled posture makes the overall design quite sleek from a particular point of view, and is sure to cater to most folks whether they’d initially prefer it or not. The case comes in more than a few color options, the black chassis being the one our labs unanimously voted as being the best aesthetically, but the other colored/windowed options are sure to attract loads of other users out there.

Finally, being initially fitted with one fan only and despite the addition of a CPU heat-sink fan and the GPU itself, the case is surprisingly silent, which shouldn’t come as a surprise at all. Spinning at a maximum of 1200 RPM, the included fan is indeed silent and when left spinning at lower RPM, coupled with a low profile GPU like a Radeon R7 250 or an Nvidia GTX 750 and an entry level CPU cooler like the Cooler Master Hyper 212 EVO, you pretty much have an ambient, almost silent workstation complemented by equally passive cooling.

Well done, Antec. Here’s an honorary Silver badge of honor from our labs at Techarx Kolkata.