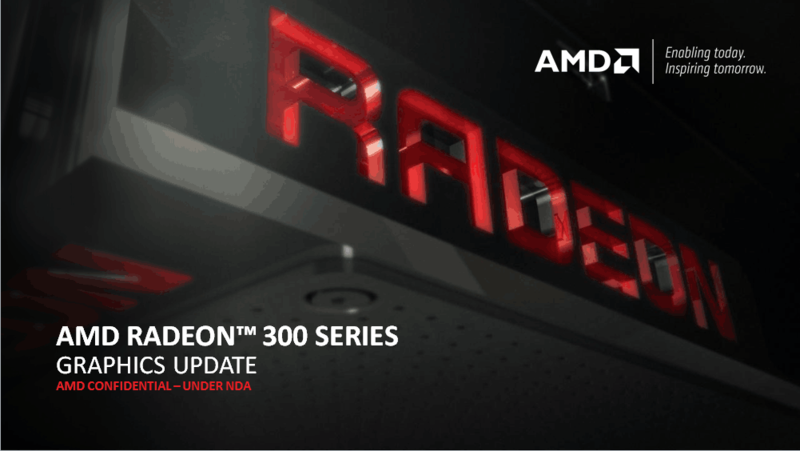 Pricing for AMD’s entire Radeon 300 series has been leaked and it’s showing major performance per dollar improvements across the board.

The pricing structure is very different from the one that have been previously rumored , however we are confident that the source of the leak and this time it is definitely the real deal .

An aggressive performance per dollar focus from the AMD team will not surprise most people at all. AMD Radeon cards have always been providing users with performance that would otherwise only be accessible for a significantly larger premium from the green team. 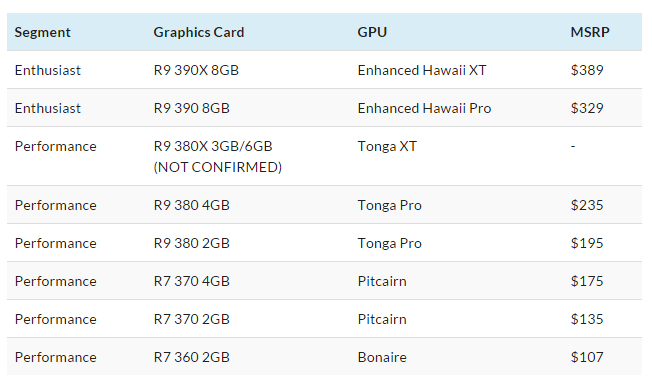 AMD’s Hawaii is returning with higher clock speeds and double the VRAM. The R9 390X, replacing the R9 290X, will undoubtedly be faster than its predecessor. The higher clock speeds for the GPU core will likely enable the card to completely close the gap with the GTX 970 at 1920×1080. The doubling of memory capacity and the faster GDDR5 VRAM frequencies will enable the card to distance itself even further from the GTX 970 at higher resolutions in which the R9 290X is already ahead.

Since Nvidia has yet to show any interest in introducing 8GB versions of its GM204 based GTX 980 and GTX 970 cards means that users who need the higher memory capacity for multi-GPU setups driving high resolution monitors will target the R9 390 series. Combine all of these advantages with the $389 price tag for the R9 390X 8GB  creates a worthwhile proposition. It’s priced close enough to the GTX 970 for users to contemplate moving up to the R9 390X. And it’s noticeably less expensive than the GTX 980 for users to consider the more attractive value proposition. A better deal however is perhaps the R9 390 8GB which is even less expensive at $329. 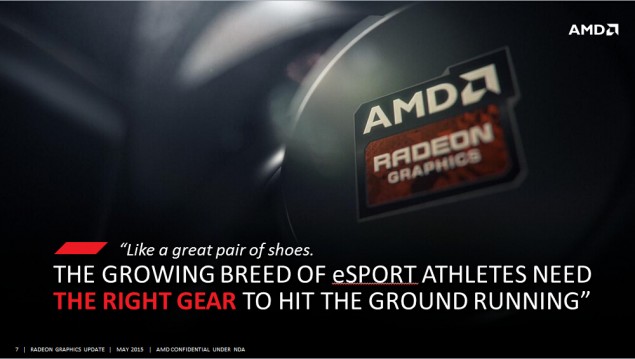 Going further down we find Tonga, AMD’s most recent GPU to date. Tonga Pro, the cut down variant with 1792 GCN stream processors, will debut at $195 as a direct competitor to the GTX 960. The card should perform about 5-10%  more than the R9 285’s performance  thanks to the higher clock speeds.

Tonga is actually a very capable chip and a fully unlocked version would be very desirable. AMD introduced significant improvements to the GCN microarchitecture with Tonga which enabled the chip to outperform its predecessor, Tahiti, despite having a lower clock speed and 33% less memory bandwidth. An R9 380X with a 384bit interface, 2048 SPs and a clock speed north of 1000Mhz will be packing quite the punch. Especially considering that it falls under the huge $130 market gap that exists between the GTX 970/R9 390 and the GTX 960/R9 380.

Moving on to the R7 series. We have Pitcairn at $139 and Bonaire at $107. Currently these price points are occupied by Nvidia’s GM107 in the form of the GTX 750 Ti and GTX 750. Both of which are significantly slower than Pitcairn and Bonaire respectively. This is a vitally important segment for many of the growing markets especially in Asia and South America. So we’re sure to see a reaction from Nvidia in that segment soon, likely through price cuts.

We should expect more news soon at E3 , and we are really excited about AMD’s flagship FURY card , which AMD recently showed off at Computex .