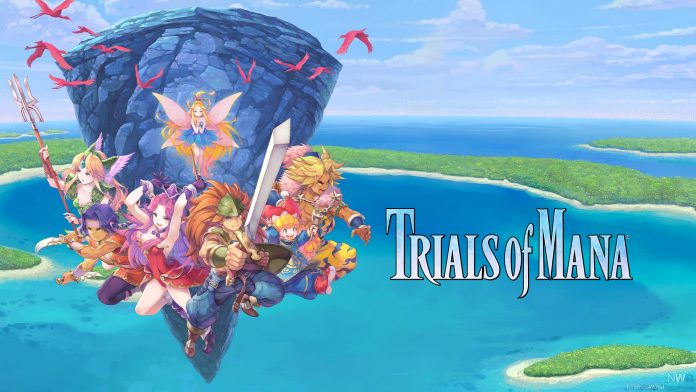 Trials of Mana give you the opportunity to create your party from three of 6 characters, that means a whopping 20 number of possible combinations and 3 different possible narratives to choose from. So we’ve created a guide here to help you figure out which character to go for.

Duran is a proud young soldier from Valsena, Kingdom of the Plains. Though he comes across as hot-headed and ready for a fight, the whole kingdom acknowledges his skill with a blade. Duran has nothing but love for his kingdom and respect for the Hero King, a good friend of his departed father, Loki the Golden Knight.

Good For: Strong Melee focused character, capable of dishing out damage while having high defense classes. Has access to various magical abilities based on which class you go for.

Angela is the only daughter of the True Queen of Altena, the snow-covered kingdom of magicians. Because Angela’s mother hardly spent any time with her as a child, the princess was prone to act out to get attention, wearing gaudy clothes and playing pranks on people in the castle. Despite this, her love for her mother runs deep. Angela never got the hang of casting magic spells, a problem that plagues her to this day.

Kevin is heir to the throne of Ferolia. His father is the king of the beastmen, but his missing mother was a human woman. Kevin’s father raised him to be a fighting machine, which affected his social skills. He is unused to conversing with humans, which can make him hard to understand at times. The ice around the young boy’s heart only began to melt after making friends with Karl the wolf pup.

Good For: Strong Melee focused character, capable of dishing out damage while having high defense classes. Has access to various magical abilities based on which class you go for.

Charlotte is the granddaughter of Wendel’s Priest of Light. She looks much younger than she is thanks to the elfin blood in her veins. Perhaps because of this, she has always been coddled by the people who raised her in the temple. Charlotte’s bright and outgoing personality can be both an asset and a hindrance. Though curious, she’s superstitious and a bit of a scaredy-cat.

Good For: Healing magic as well as support magic that can buff allies and debuff enemies.

Hawkeye hails from the desert fortress of Nevarl, home to a guild of noble thieves. He was raised as the orphaned ward of Flamekhan, the leader, together with Flamekhan’s own children, Eagle and Jessica. Hawkeye comes across as a laid-back and charming young man, making it hard to tell when he’s being serious. But at his core, Hawkeye is a fiercely loyal friend. Nothing gets past his honed senses and quick wit.

Good For: Rogue that can special in debuffs and trapping enemies. Also has access to support magic and area of attack skills based on the class you choose.

Riesz is the young princess of the mountainous kingdom of Laurent and captain of the renowned Amazon guard. She has a will of iron and down-to-earth manner. Though some might call her stubborn, Riesz is always there to lend a hand to those who need it. She lost her mother as a child and since then has tried to help raise her little brother Elliot. Her topmost priorities are her father, brother, and kingdom.

Good For: Heavily support based skills that focus on buffing allies while applying debuffs to enemies.

Because of the multiple arcing storylines and the fact that your entire storyline will change depending on which hero you pick, it’s important that you go with another character who shares the same main villains as you. This ensure that your narrative journey will be consistent and replayability will be maximised as you will avoid unnecessary bits of narrative from your companions.

These are the narrative pairs that share a fate:

Best Characters To Keep In Your Party

Aside from the above pairings for narrative it is also imperative to choose proper party combinations to avoid handicapping yourself in late game. While Trials of Mana isn’t a particularly hard game, things can get heated down the road if you don’t properly strategize.

Our advice is keeping a main damage dealer who also acts as the vanguard, while keeping a support character who buffs/debuffs and a healer.

We hope this made the daunting task of choosing a starting party easier from you. Fret not if you have already started a playthrough, as the game does allow you to change classes, later on, make sure to select a class that has the abilities that you’re missing out on.