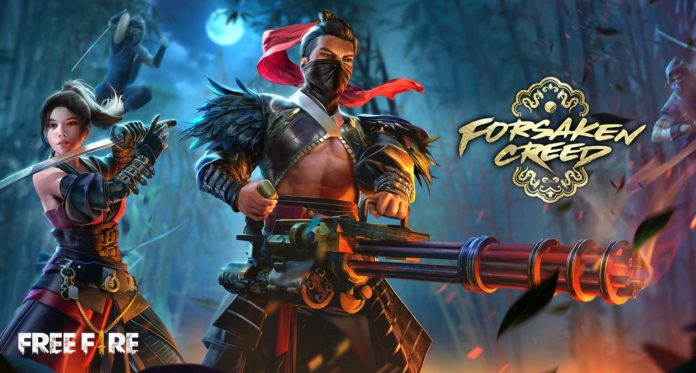 INDIA – April 29, 2020 – Free Fire will be taking Survivors to a parallel universe in the 1800s for its latest Elite Pass (EP), Forsaken Creed. The EP will be filled with samurai, mutants, guns, and plenty of rewards, including the Shadow & Unseen Custodian skin sets.

The Forsaken Creed EP will star two protagonists: Mitsuo and Ichika. Both are members of a secret Imperial Elite Guard, which is on the brink of extinction due to the growing population of mutants in their region. No one knows what specifically caused people to become mutated. What they know is these mutants are a major threat to humanity and need to be taken out as quickly as possible.

Mitsuo and Ichika have been tasked to eliminate one mutant in particular, although their mission has been ongoing for several months now. In the meantime, they’ve been going up to the mountain forests to kill as many mutants as necessary to hopefully retake their village one day.

The Free Fire battlefield has plenty of occupational costumes with all kinds of features already available. The game explores as many fresh and exciting designs as possible so that it can continue to enrich and improve the gaming experience for all Survivors. This time, Free Fire wanted to introduce some elements that it hasn’t touched upon much. Using the 1800s for inspiration, Free Fire chose the mysterious and austere black for the Shadow & Unseen Custodian skins. In addition, there are subtle dragon patterns, which represent the highest royalty ranking as well as being sacred and invincible. The overall style is mighty, powerful, and sharp.

In the Forsaken Creed EP, Survivors can earn a number of rewards that include:

Survivors who want to be transported to mutant-filled ancient land in a parallel universe can do so by downloading Free Fire at the following locations:

Garena is the leading game developer and publisher in Southeast Asia, Taiwan, and Latin America, and has expanded into other fast-growing markets globally.

For more information on Garena, please visit https://www.garena.com. To find out the very latest on Free Fire, do head down to https://www.facebook.com/freefireIND.