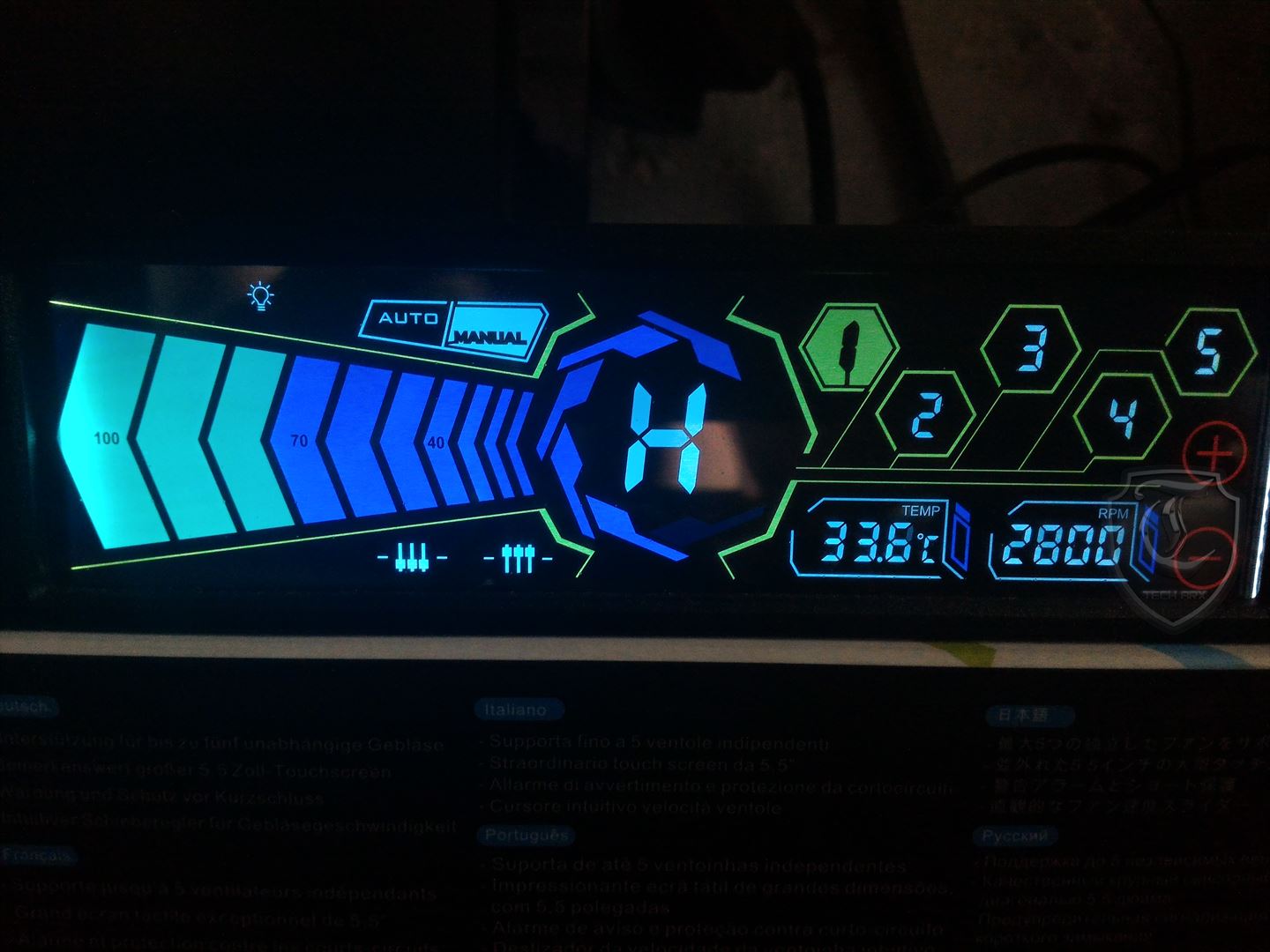 [nextpage title=”Introduction and showcase”]Fan controllers are not a new concept, neither are their touchscreen brothers but that haven’t stopped anyone from developing new ways to control for their own brand of cases. Thermaltake being no stranger to the trend brought a touchscreen controller of their own in the form of Commander FT. 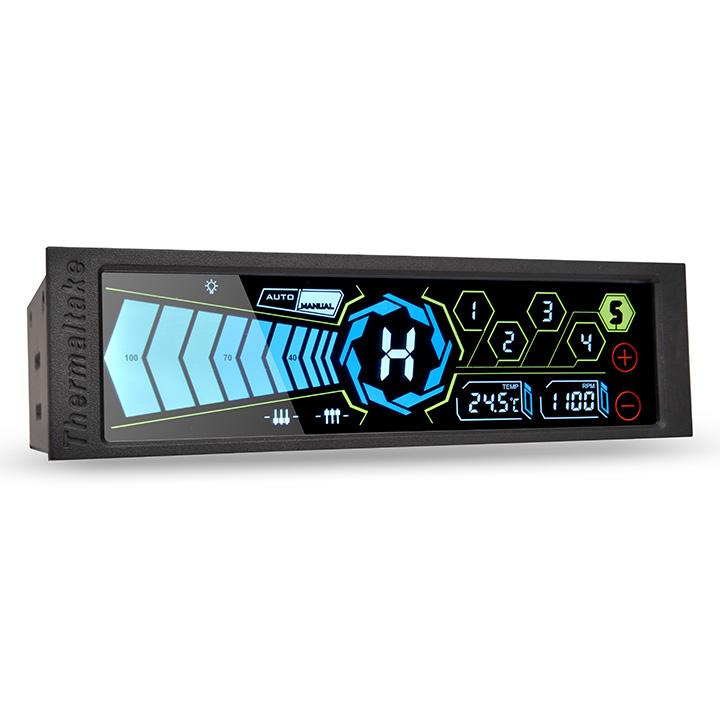 The Thermaltake Commander FT is the latest of fan controller offered from Thermaltake. This is not a plain gene controller, so dont be deceived by its looks.
It packs in all the bells and whistles that a fan controller should offer ranging from thermal alarms, fan alarms when no RPM is being reported from it, the option to disable the LED lighting.

Lets check out a few pictures of the product then we will move on to the setup and testing. 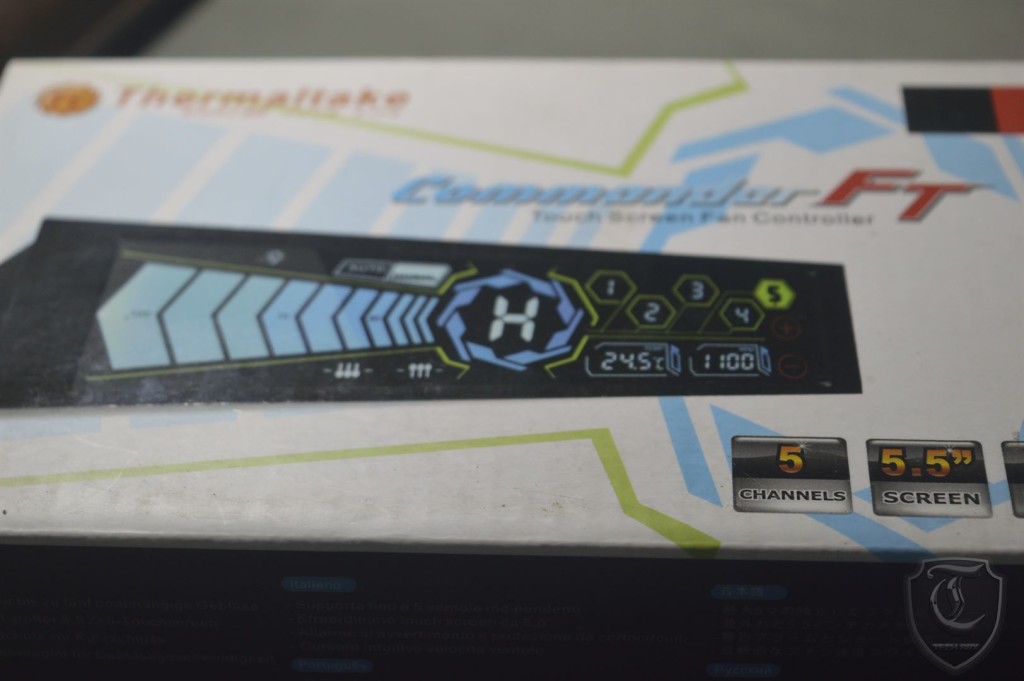 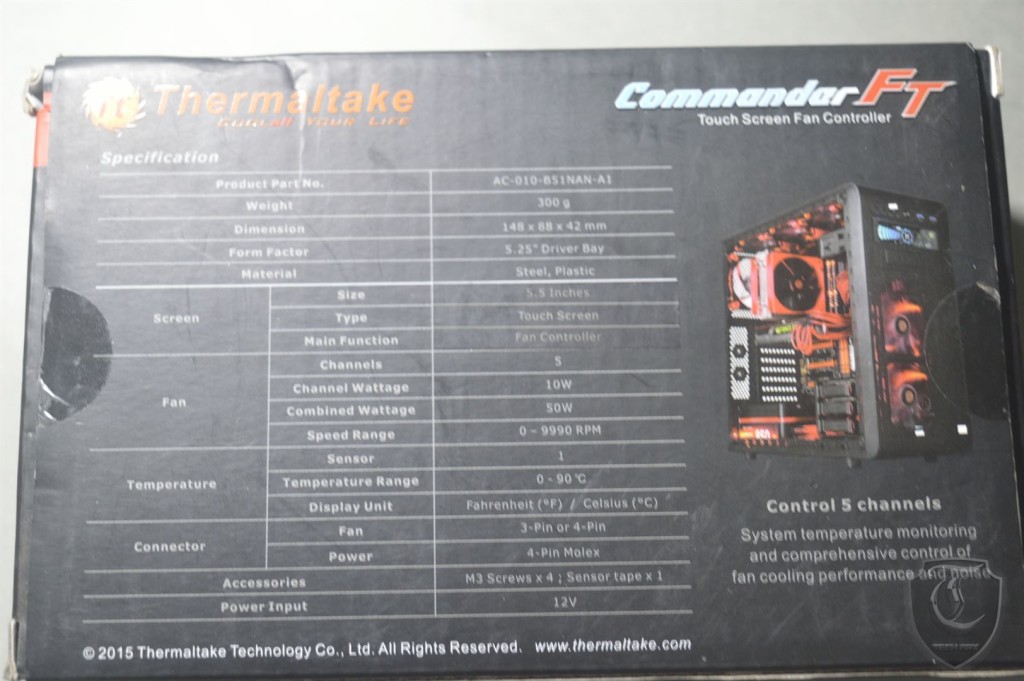 The boxes are pretty much standard fare, while the front shows off the the main features like 5.5 Inch screens and 50Watt power delivery etc, the back shows off how it will look mounted on a chassis along with the full specifications of the Commander FT. 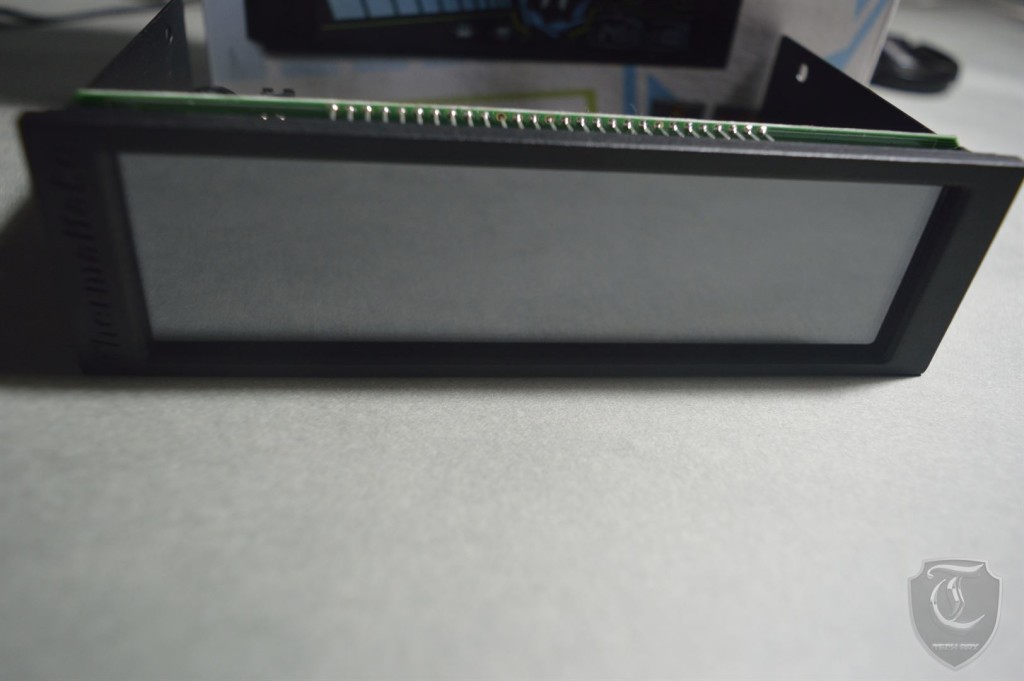 To accommodate the 5.5 Inch screen thermaltake has opted for a thin bezel, 8.6mm on either side and 4.6mm on top and 3.5mm at the bottom. 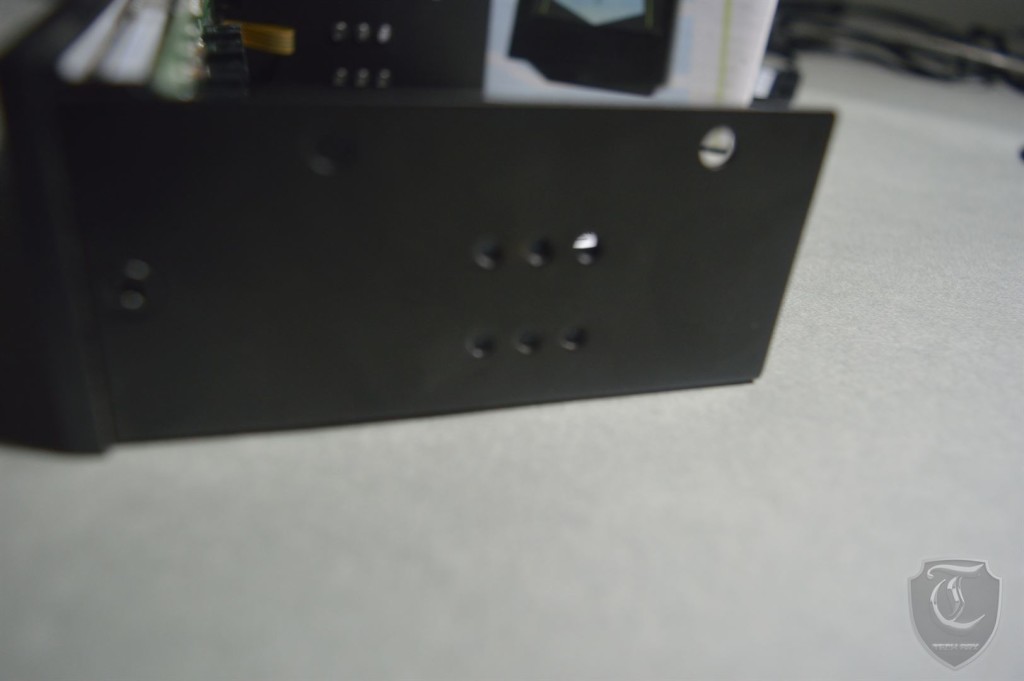 Thermaltake has made the sides out of steel and opted to drill holes in them to facilitate easy mounting. 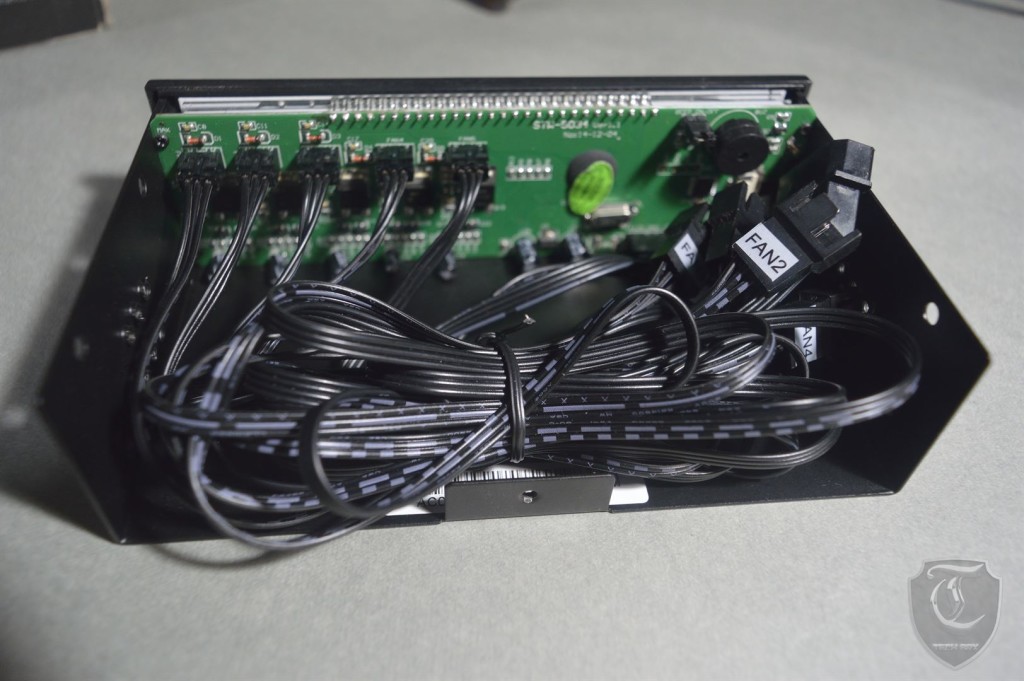 Coming to the back of the controller we see all the wires tied neatly for the purpose of shipping, one good thing to note here is that the wires are all black and plugged into the PCB, so the wire management is a bit easy. 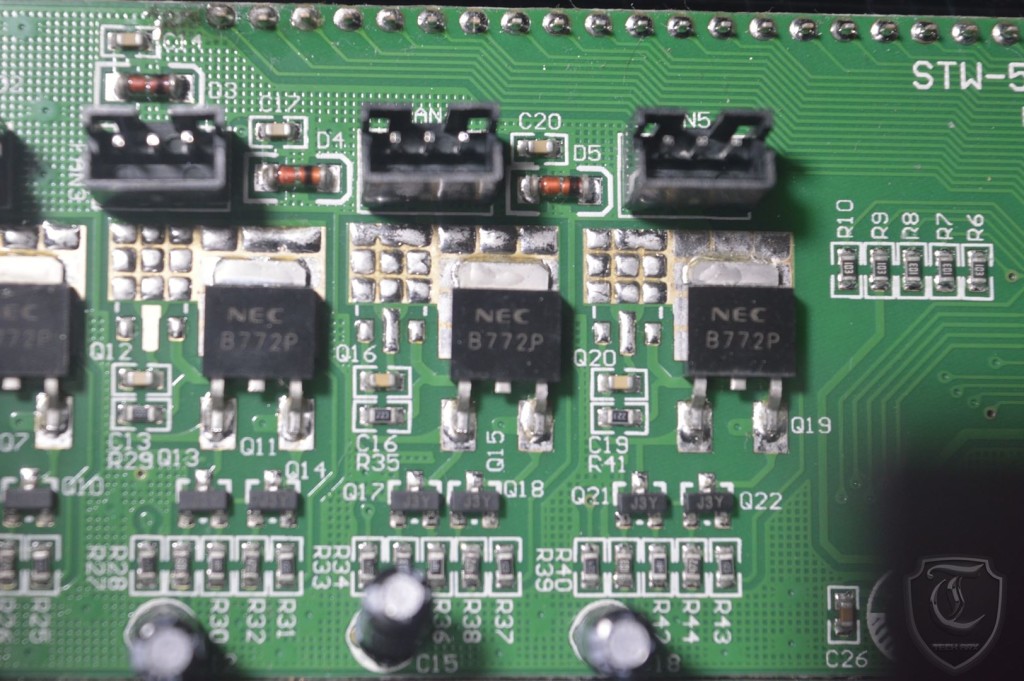 With the wires aside we can see the PCB more closely, on the left side you can see the row of capacitors along the bottom, the rows of resistors in the middle, and we see that they chose NEC chokes at the top before the power is delivered to the five 3-pin clips for the fans along the top. 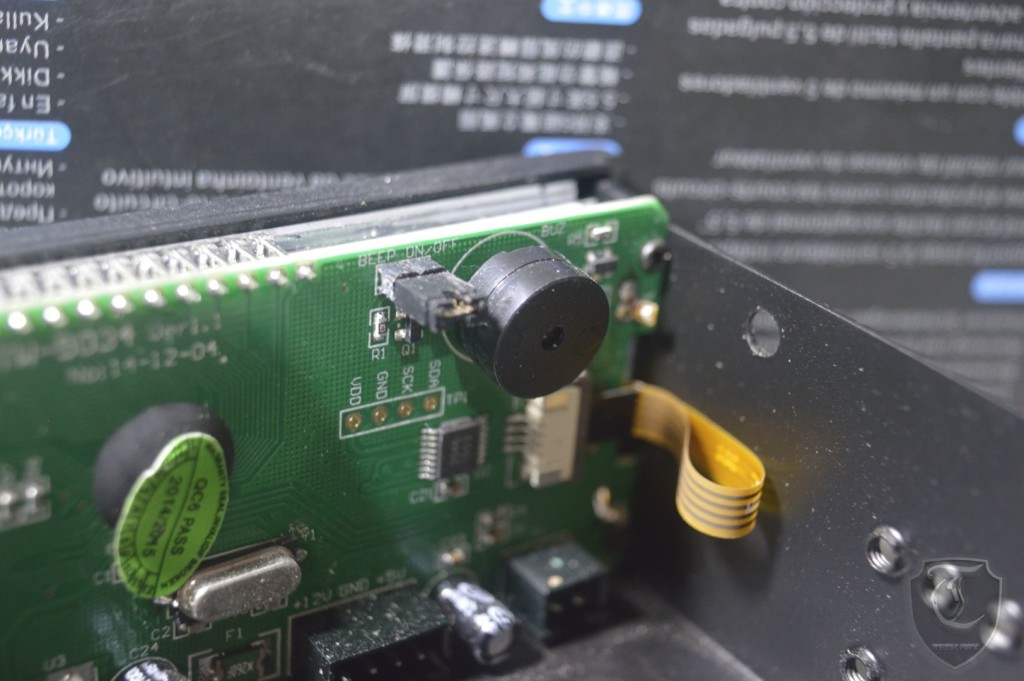 Coming to the right side we find the buzzer at the top, and it also includes a jumper that can be removed to disable the speaker along with a ribbon connection that controls the touchscreen, 4-pin connection for power, and to the right of that is the 2-pin thermal probe connection.
Accessory wise Thermaltake provided a set of mounting screws and a chunk of tape for sticking the thermal probe.
[nextpage title=”Fan Setup and testing”]
We managed to dig deep into our box of fans for an assorted set of fans to see what the commander FT can handle and came up with a couple of Corsair AP 120’s and a couple of Xtraflows and Thermaltake Riing fans. 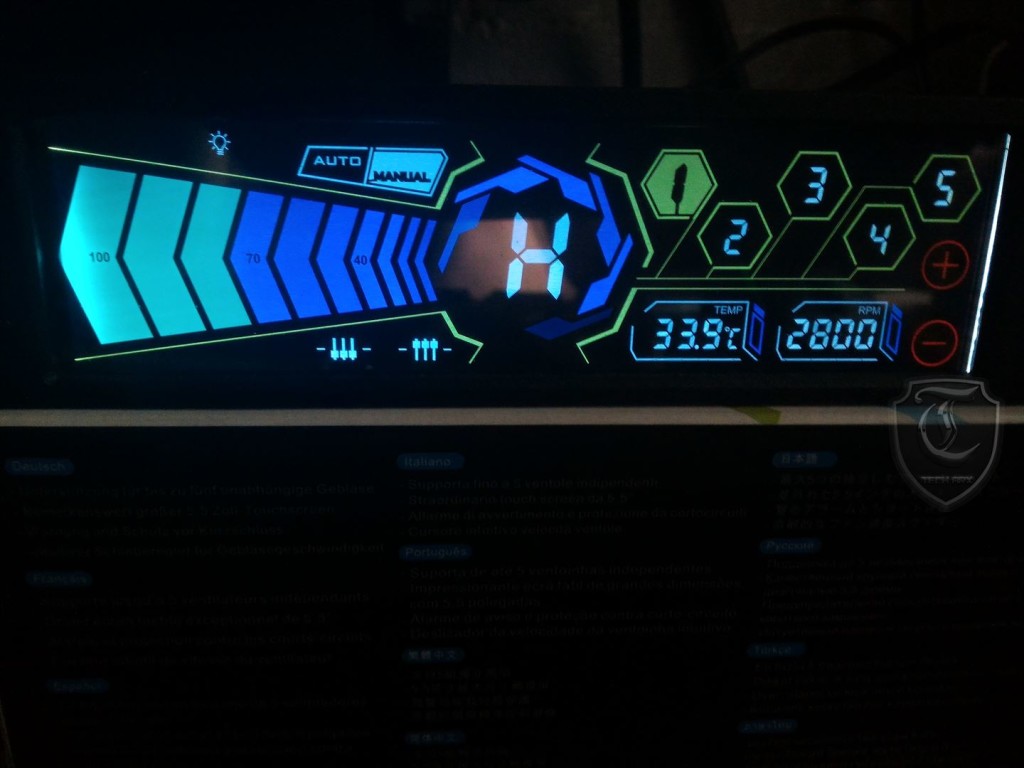 With the controller fully powered up,there is a tiny light bulb icon that will enable or disable the LED backlighting, and we see that all channels are set to run the Auto setting,whihc stands at roughly 40% power. At the bottom on the left, we can set all channels to minimum speed, or maximum speed, by pressing the slider icons. The right side then offers channel selection, temperature and RPM readouts, and a plus and minus to adjust the alarms thermal setting. 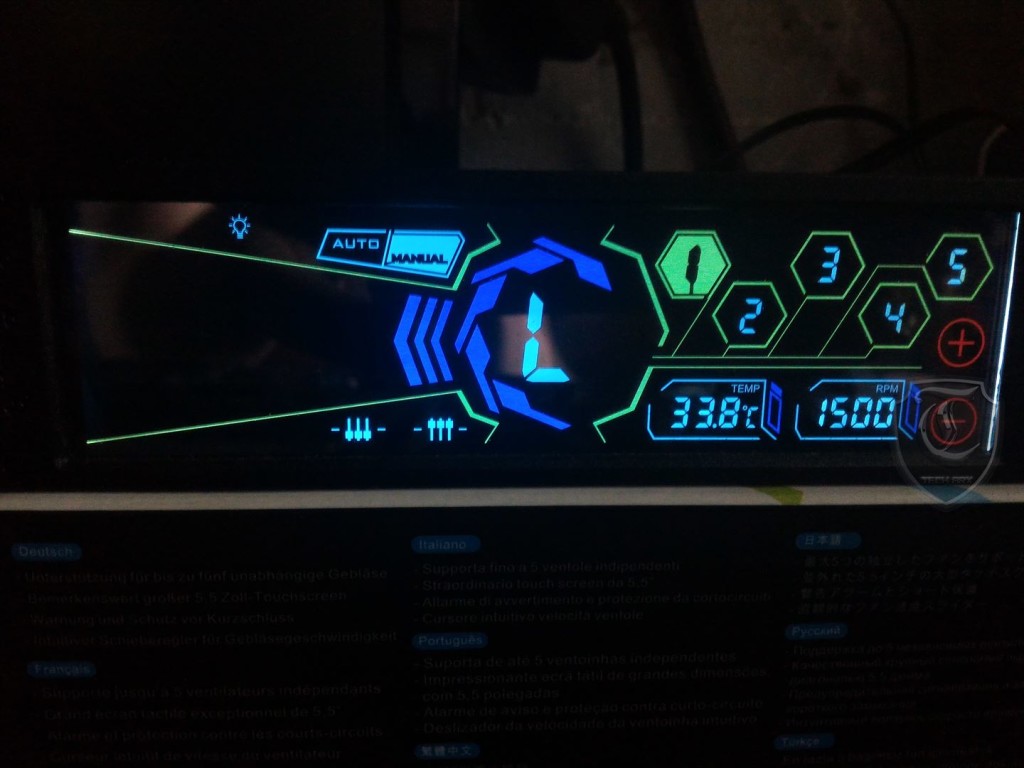 messing a bit more we see we can indeed change the scale that the temperature is displayed in, but that same display can be used to adjust the thermal alarm, where you use the + and – buttons to move the setting from 40 degrees Celsius at the low-end, up to 90 degrees at the high-end.

After quite a bit of tinekring with it we found the Commander FT delivers on its promises.We did little bit of probing to see how much juice the controller gives at different speeds and found out it gives around 11.79V when set to 100%,most of the 10% drops on the way to 30% fan speed offers a 0.35V drop from its previous setting. Coming down to 30% we found the controller giving a modest 5.32v.
A few more things I would like to mention, first the slider for fan RPM moves in 100 RPM segments, so accuracy is not exact rather it gives a general idea of the speed; secondly if a fan is on channel one, and you have it set to manual control, the rest of the channels still uses the auto control unless changed physically. 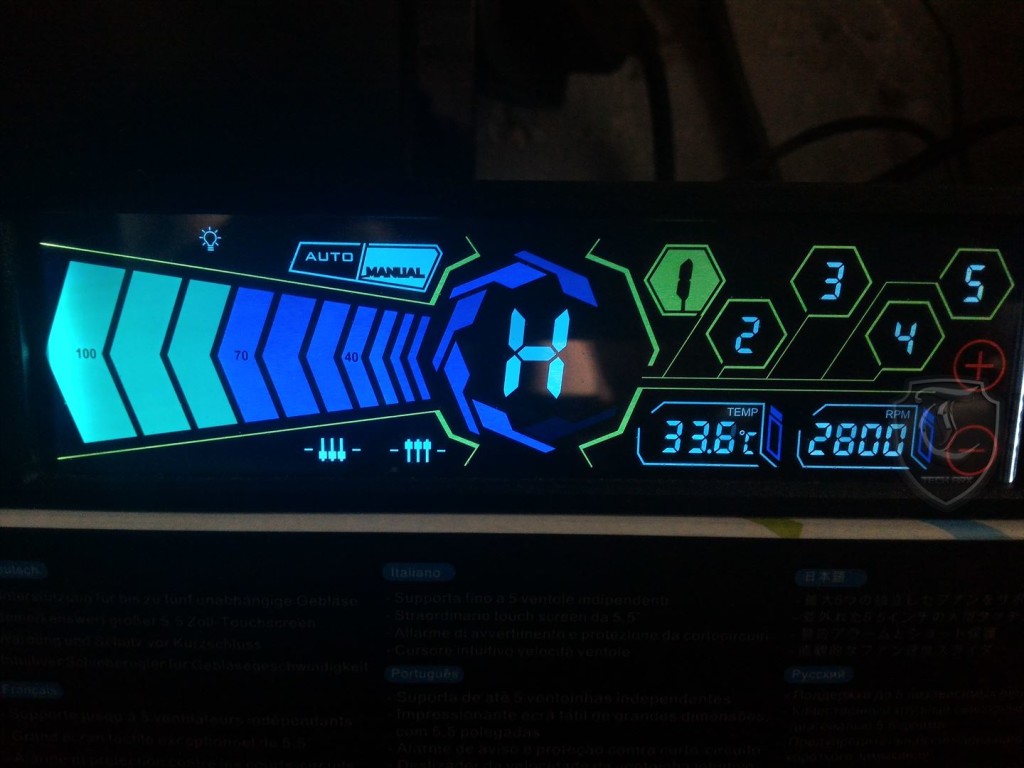 Outside of that, this the fan controller with its smooth lcd screen and plastic bezel the controller doesn’t really stick out or looks funny in most of the cases(at-least on the cases we tried). Overall it has a very solid feel, the wires are easy to disconnect and connect back. On a price point comparison this stands toe to toe with the NZXT sentry 3, and while the NZXT is a bit cheaper(in international prices) the commander FT has a bigger screen and a bit easier to use.Multiple temperature sensor will be an welcoming addition to this already good controller.Coming at around 37USD it’s a pretty good offering and is a must have even if you don’t have a thermaltake chassis.