God games are a dying breed now and for the fans of games like Black and White, it’s really disappointing. I have spent a considerable amount of my childhood playing Black and White, Populous, both genres defining games. So when I came across The Mims Beginning, you could say I was a little excited.

Before I dive into my review, here’s a little about the developers and the game.

The Mims Beginning has been in development for over four years now by a 5 man team, I kept a close eye on the game because of it belonging to one of my favourite genres. The game has landed on Steam Store thanks to the Greenlight program and it had successfully undergone the crowdfunding campaign on Indiegogo.

Since the demo version, which garnered praise from players and press alike with a positive reception in high-profile outlets, the game has undergone incredible change – all the common flaws mentioned by the community were ironed out and the gameplay itself was expanded immensely. 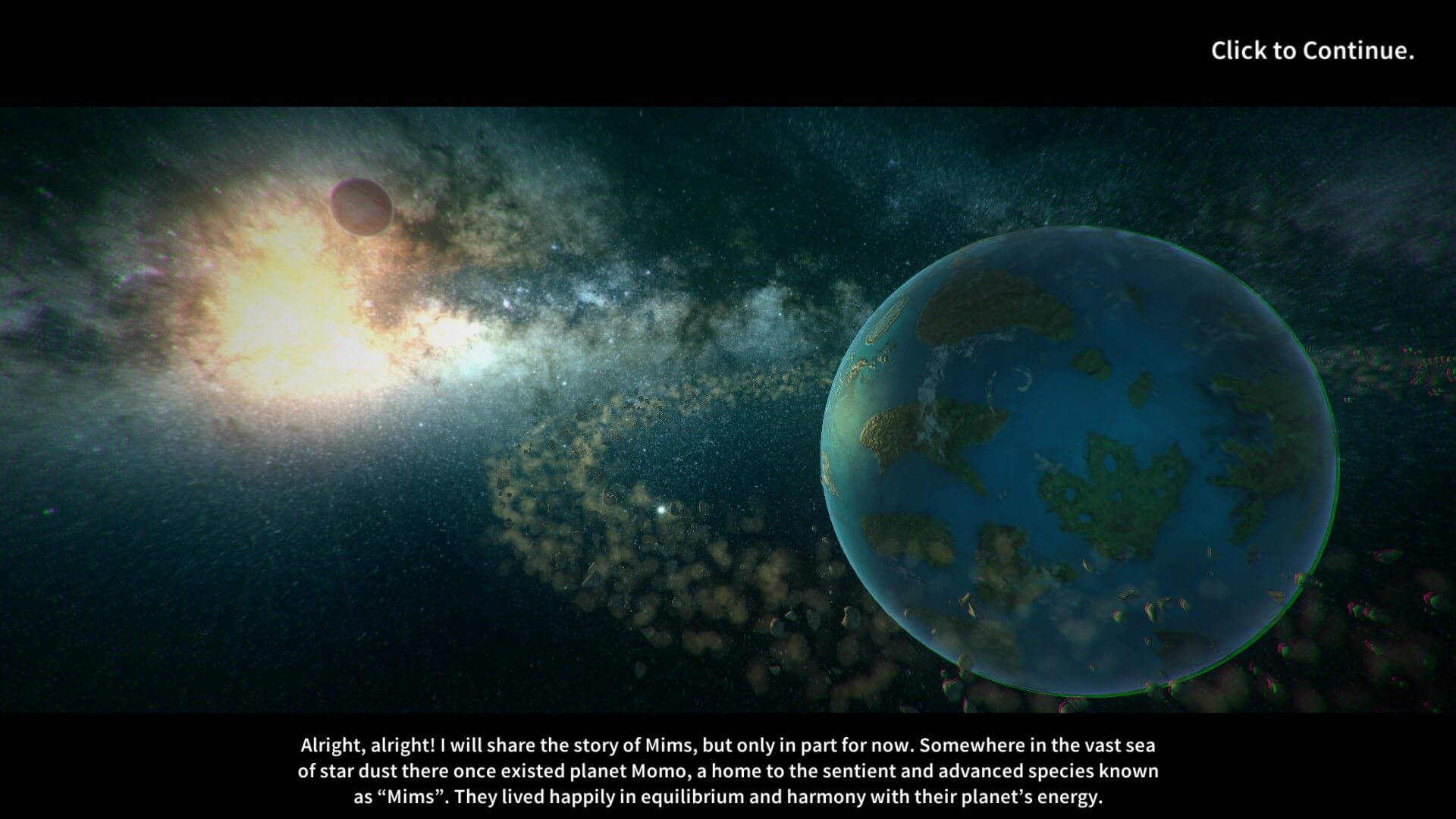 While I didn’t have a chance to play this game during early access I finally got my hands on this much-awaited game, so without further wait let’s get started on the review.

The Mims Beginning puts you – the player in charge of taking care of little creatures that resemble gloves called ‘Mims”. As their god you have to build up a thriving colony, all the while balancing their needs and happiness.It is your task to figure out tactics to improve your survival of your Mims while completing each preset goal.

The Mims features a delightful comedy filled story, about the glove-looking aliens escaping on their spaceship when disaster struck. The ship is hit by a meteorite, causing it to go off course and venture even deeper into the galaxy. Due to the intensive damage to the ship, the Mims are sucked into space and could only drift idly waiting for help to arrive. Eventually, the freighter reached a place space where there are hundreds of small, mysterious floating islands and collides into several of them.

These mystical islands contain the DNA orb as well as important parts of the freighter. A handful of Mims reach the escape pods in time, and now it is up to YOU – their god to make sure that the Mims survive and are able to re-establish their species in this hostile world. 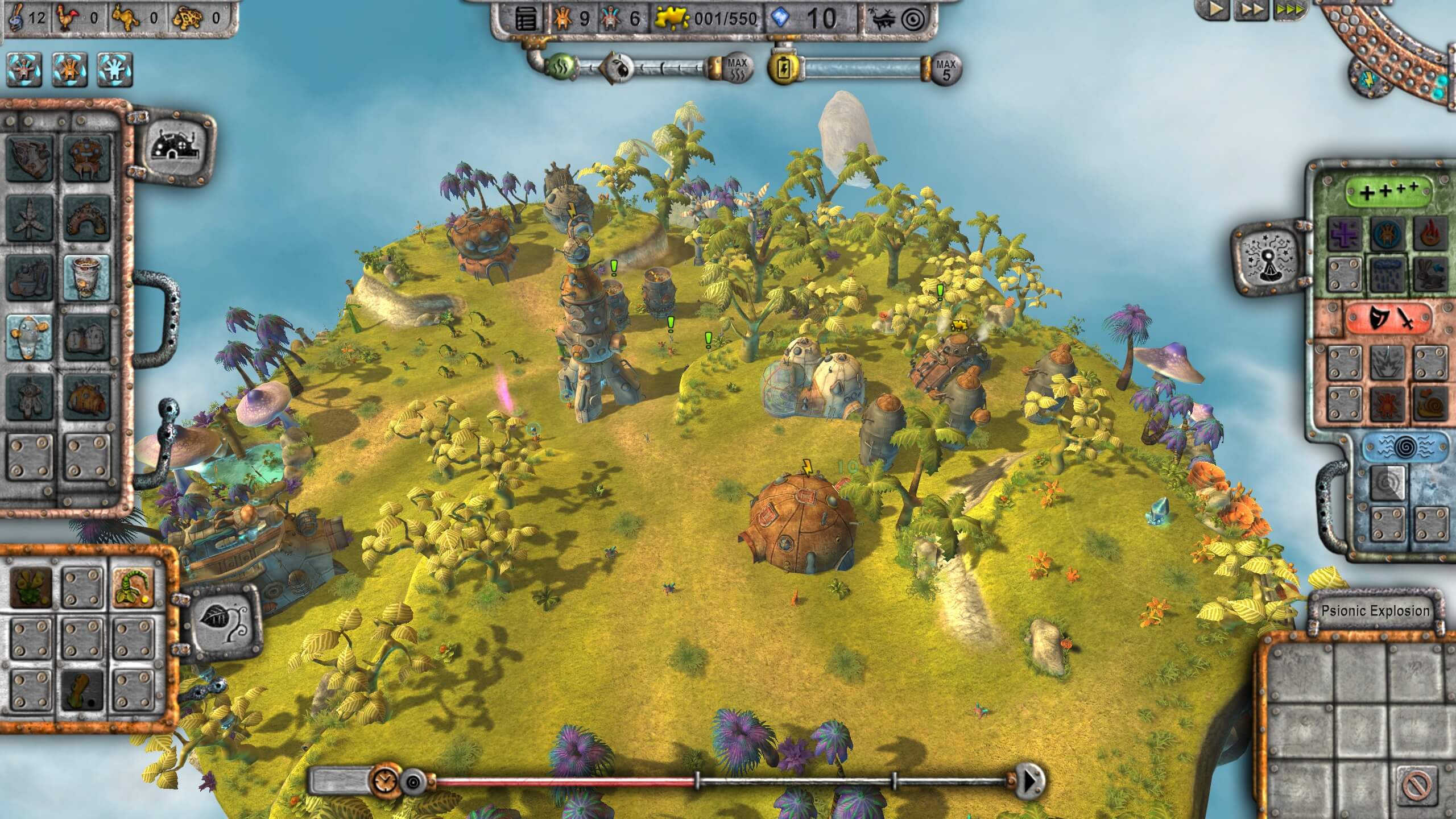 You start each game by placing a PSI tower which acts as your headquarters. This tower is vital and is responsible for keeping your reach over the island. It can be upgraded with biomass allowing you to further increase your reach and finally control the whole island.

Now, biomass is one of the three important resources in the game. Biomass is used to create buildings as well as upgrade and research various things. Biomass can be accumulated from yellow plants which produce yellow fruits that are automatically harvested by your Mims, however, plant too many yellow fruit producing trees and they attract pests that feed on the fruits and decrease your production. They also attract predators that can attack and potentially kill your Mims, presenting a new challenge – balancing the smell without affecting the productivity of your colony. 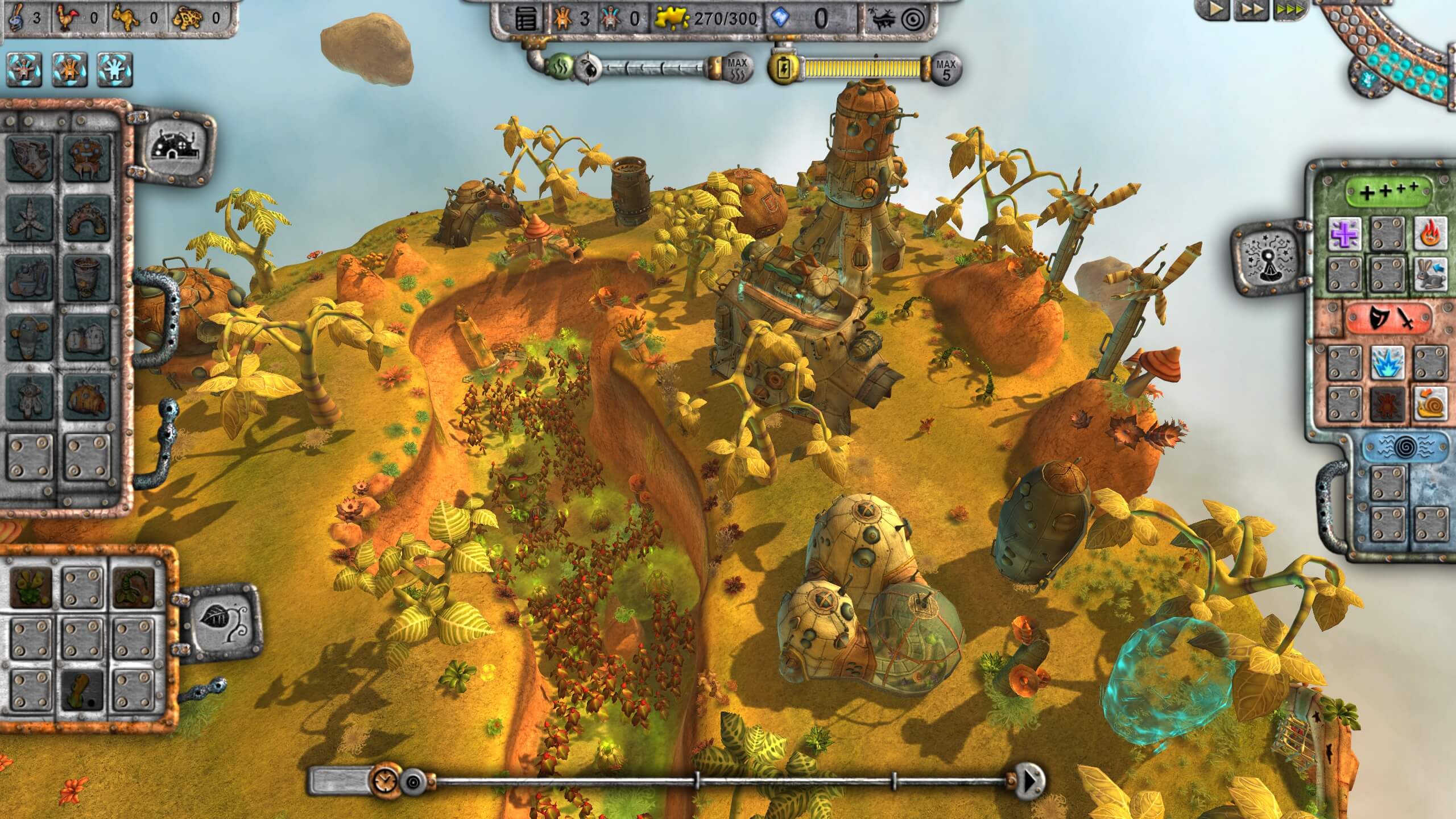 The other two resources are gems and power. These gems are highly important for progressing because nearly everything you build requires gems. Gems can be procured from rocks or by selling livestock, but again like with pests having two many pests/pets will attract predators that will wipe out your colony if left unchecked. The last resource –  power is required to keep up psi energy production as well as power buildings.Most of the buildings are completely unique and not just rehashes, each serving different purposes and each important in their own way. For example, the bio lab allows you to research new types of fruit and livestock creation, meaning you could create Flabbits( kind of rabbit ) that will eat black fruit and once they grow up you can sell them for gems.

About those predators that I mentioned you can start building up defenses by adding a defense tower or transform workers into guardians – special fighter Mims in the garrison. There are also ‘hero’ Mims that serve special purposes and have unique abilities that give you a strategic edge.

The islands also have other dangers such as earthquakes that you must be ready for, you can predict future events by researching future prediction. Every minute is a race against the clock and a continuous battle against predators, resource shortage, low morale and natural disasters. 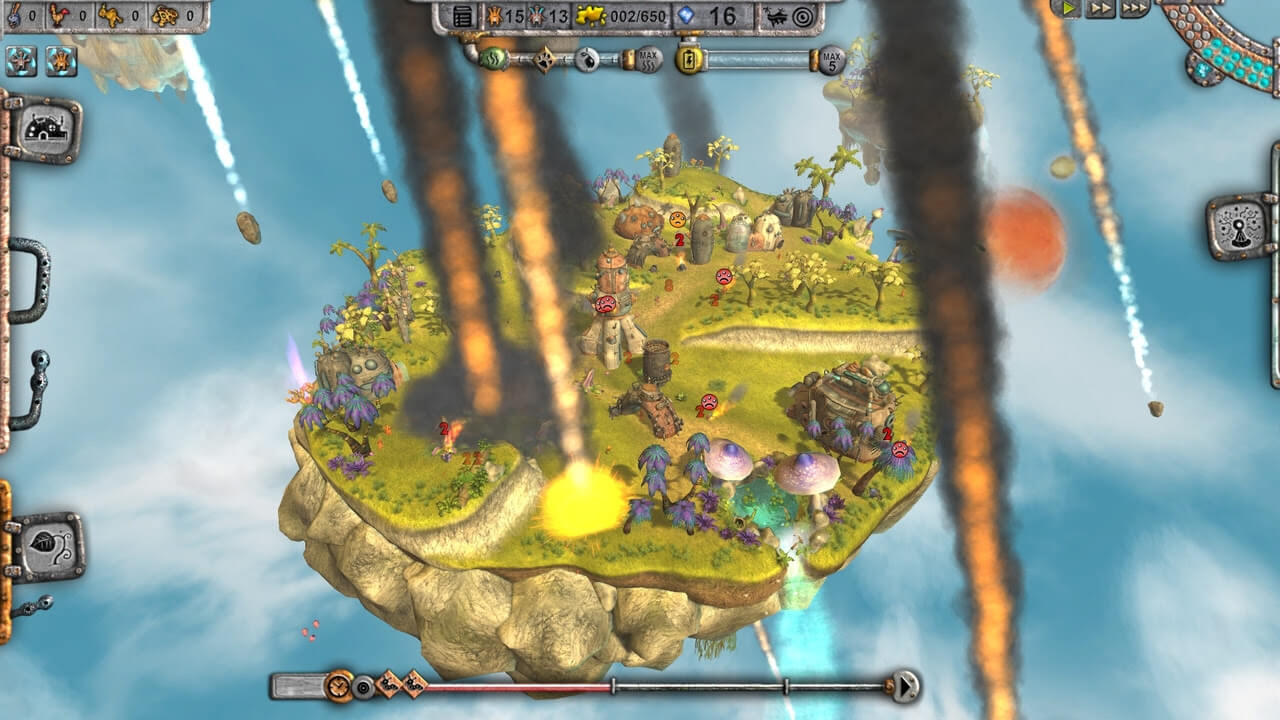 For me, every game tended to start slow and then quickly gain momentum catching me off guard with sudden attacks or disasters. I loved this slow-paced with short bursts of action, perfect for short sessions.Typically, each game lasted me a good 30-40 minutes. While this may not be much long, a save function would be greatly appreciated, the lack of the save feature is my only major gripe in this game.

The overall graphics just like the rest of the gameplay is cute and light-hearted. Colours are vibrant and characters are often cartoonish albeit with great detail. From the environment to the terrifying dragons, this game manages to look absolutely gorgeous. 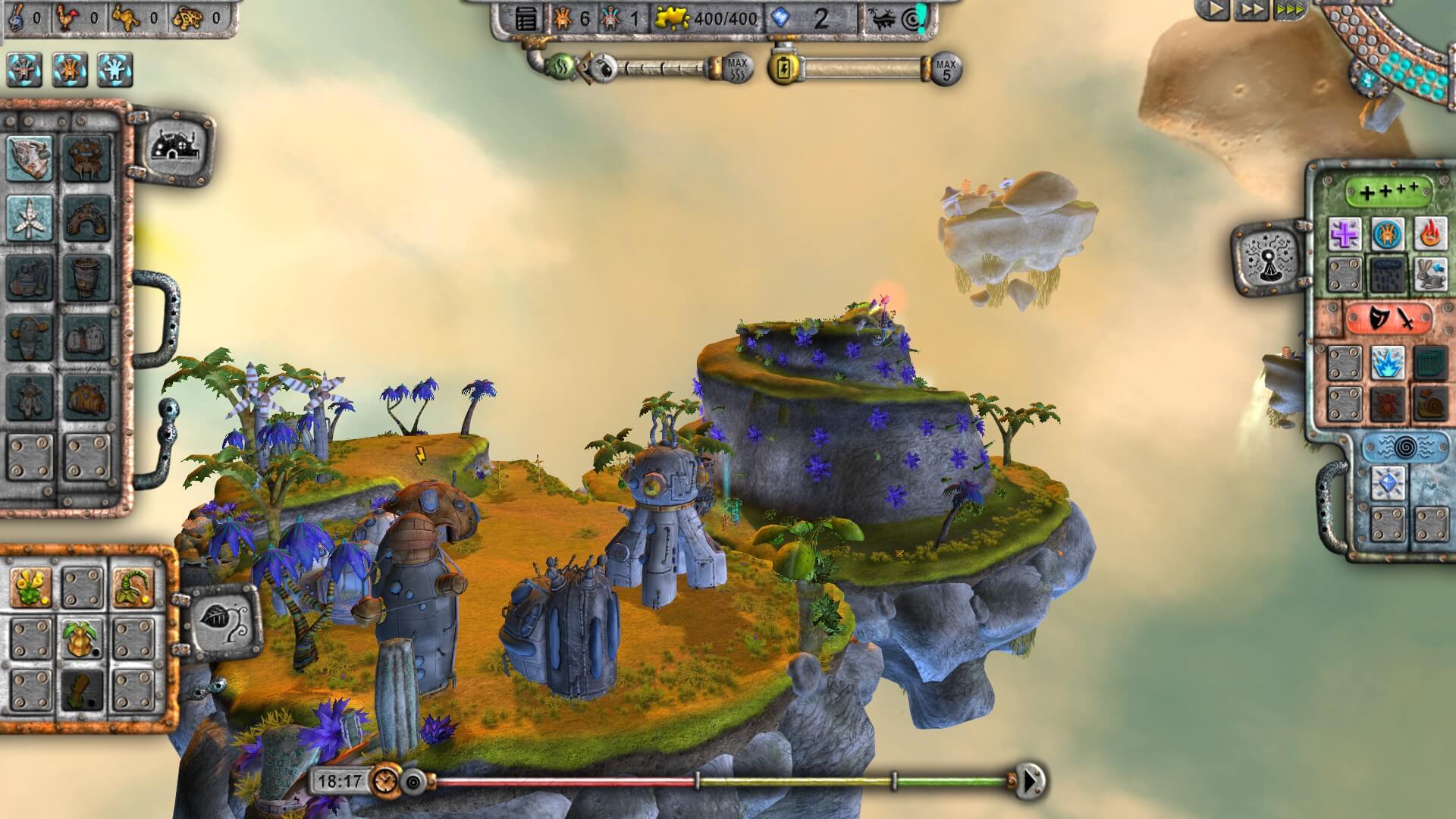 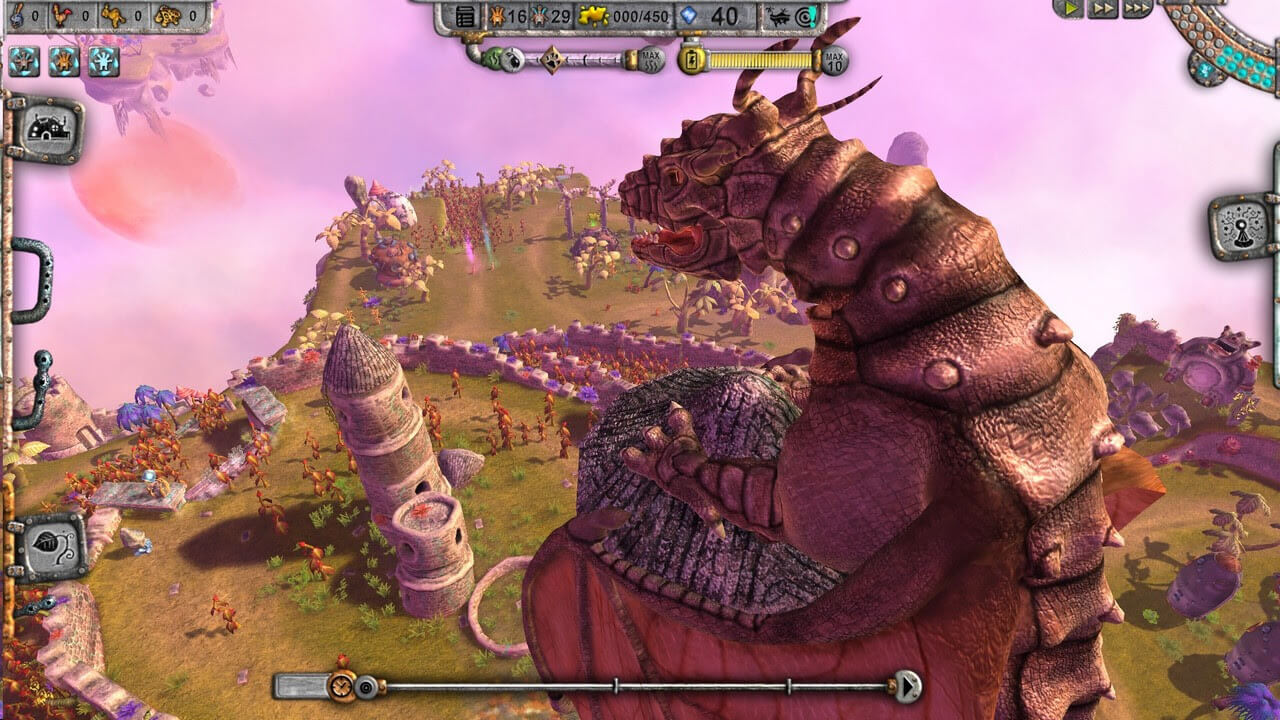 On the optimisation side, this game is a solid 10/10. I played it on my STRIX 960 and it had no problems running it maxed out on 1440p with mostly 60 frames per second with slight dips to the 40s. Pretty good optimisation for a beautiful game such as this and coming from a small indie house. Kudos to you Squatting Penguins !