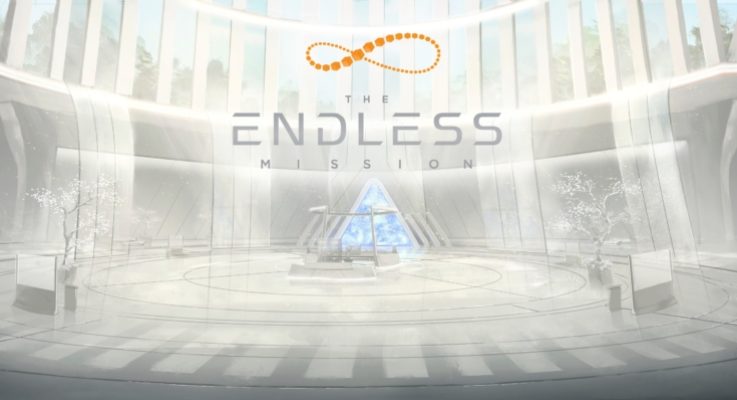 To call The Endless Mission just a game would be a crime. At its heart, it still plays like one, but it isn’t confined to a particular genre or shackled by linear objectives.

Instead, it’s a tool, to make your wildest dreams come true. Have you ever wanted to create your own game? To let your imagination roam free on a digital canvas but found the actual development part to be a barrier? Well, The Endless Mission seeks to remedy that, by offering you a fully narrated guided and streamlined experience into the world of game development.

You start off with a basic tutorial, that lets you a taste of what the game has to offer. Your first mission is a platformer in which the platforms are shorter than they need be, so you hack into the world and change their sizes. This serves two purposes, understanding basic world development – the importance of creating accessible challenges as well as a puzzle because you still need to figure out the exact height of the platforms in order to progress.

Right from the start, I found myself hooked to the insane amount of flexibility on offer here. There’s still a learning curve here, but the curve is smooth and the game does a great job of holding your hands. The result was that I found myself spending hours after hours creating custom scenarios, to varying degrees of success.

Your role in the world of The Endless Mission is explained with a story that unfolds by collecting the various pen drives scattered throughout the world. The lore is interesting but the story isn’t the main focus here. After all, this is a game about creating your own stories.

The game’s main hub – houses The Terminal, The Hall of Genres and The Hall of Celebration. The Hall of Genres which has pre-made stages from various genres called Academy Games. These core games allow you to understand how each genre works and quickly build your own game by using existing assets and game logic.

The Hall of Celebration is where the player made games are shown off, you can download community creations and play through the levels as they were intended to. Or you can hack in and add your own flavors. It’s also easy to upvote and downvote good content, so you can easily filter through them and help good games reach the limelight.

The beauty of The Endless Mission is that while it offers a very simple way of hacking in and modifying simple parameters and game design, you can straight up go full pro mode in the editor. The editor resembles the Unity game engine, both in terms of available tools and the UI. This does a great job of easing players into real-world development of games.