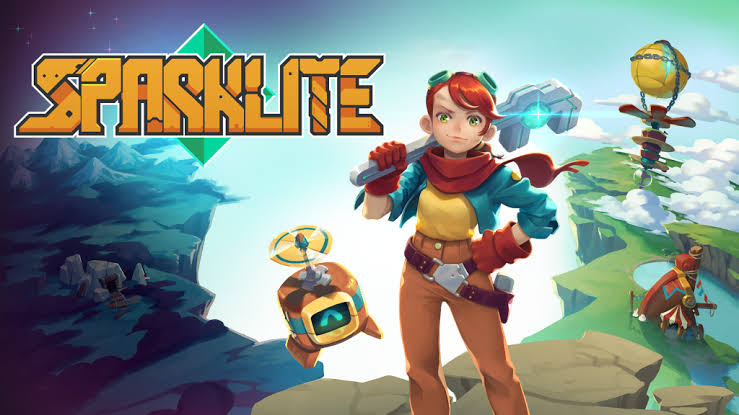 Sparklite in more than one way is a trip down nostalgia lane. Developed by Red Blue games, Sparklite is an action/adventure game with roguelike elements that feels like the Zelda games of yore.

You play as Ada, our charming protagonist as she goes up against the Baron and his minions. After crashing your ship in Geodia, and a brief impossible fight you find yourself aboard a floating rock.

Sparklite’s core gameplay loot consists of traveling to the everchanging world of Geodia via an airship, killing monsters and collecting the game’s titular currency – sparklite. If you end up dying, you will be transported back to the hub where you can upgrade your items and skills and try again.

Aboard the aforementioned hub, you will find various NPCs to purchase items and upgrade your stats. You can spend sparklite to unlock new patches that can improve your base stats, or buy new tools using schematics you find out in the world.

Not all items and upgrades will be available to purchase at the start and you will need to spend sparklite to get improved facilities.

Due to The Baron’s mining activities, the world of Geodia is unstable and every time you die and go back down the world will change. This is done using procedural generation and there are five biomes – the Vinelands where you start out, the Goldenwoods to the east, the Acid Bogs to the south, the Shifting Sands to the west, and Titan’s Ridge to the north. Each Biome has a different visual aesthetic and enemies to beat.

Sparklite’s procedural generation tends to repeat areas a lot, and as a result, many areas start feeling familiar. This does seem like a good thing, knowing the layout does give you a sense of confidence, but in a roguelike where every move can be your last, this starts to become tedious at times.

You can encounter different NPCs when exploring the world, and give you simple quests or puzzles that can unlock rewards. I met a pirate that hosted a game of luck, where you had to choose among 3 boxes with potential loot to be found. Speaking of loot, the only drops you get apart from sparklite are tools. These can be health pickups, mines, and other nifty little things but if you die, you lose them all.

Sparklite’s roguelike elements are most noticeable in its difficulty. At the start of the game, you will die easily. You won’t cause as much damage, and your initial weapon is limited to a short wrench.

Each time you return to Geodia, you will learn from your mistakes. Studying enemy attack patterns is like a puzzle itself, and is key to not dying. But you will need to grind regardless of how good you are.

Sparklite also has some co-op elements, after you defeat your first boss, you are joined by your flying sidekick. However it’s not really fleshed out, and your co-op partner is limited to picking up stuff and being a source of light in mines.

Sparklite’s old school gameplay is equally matched by its visuals. Gorgeous pixel graphics bring the world of Geodia to life. And while the procedural generation hurts the uniqueness of each area a bit, the monster and NPC design are overall well done.

Lastly, the audio seals the nostalgia package on Sparklite with chippy tunes that make every moment memorable.

Sparklite is a blast from the past, with old school gameplay, visuals, and audio. However, it’s held by its slightly repetitive biome generation and short artificially padded duration. Regardless, it’s still a worthy purchase for anyone looking for a good roguelike experience.