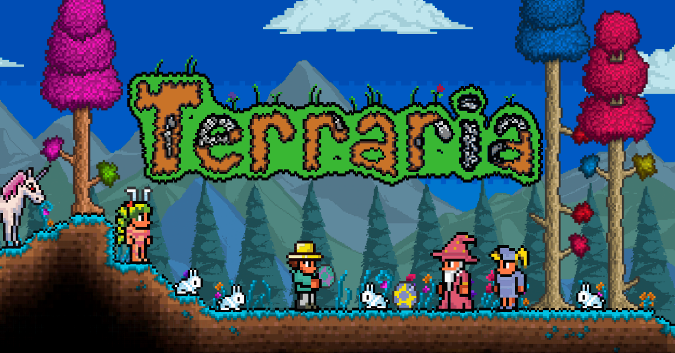 Game development isn’t easy. The whole notion of having an idea on paper then bringing it to a working state is something. It takes hard work. But making a game to compete with the top games on steam is something else. Getting to that level isn’t straight forward. Certainly not easy for independent developers. Yet the people of Re Logic managed to make their small project Terraria into a genre of its own. Being  one of my favorite games, I take a look at the history and evolution of Terraria.

Terraria is an action-adventure sandbox game that features exploration, crafting, construction, and combat with a variety of creatures in a randomly generated 2D world.The game starts in a procedurally generated world. The player starts with three basic tools: a pickaxe for mining, a shortsword for combat, and an axe for woodcutting. Many resources, notably ores, can be found while mining or exploring underground caves. The player uses resources to craft new items and equipment at an appropriate crafting station for that recipe. Several advanced items in Terraria require multiple crafting operations where the product of one recipe is used as an ingredient for another.

Terraria has had a few significant updates throughout its lifetime. We’ll be taking a look at them to see how they changed the game by a long margin.

At the time of release, it had little content. The main meat of the game involved collecting resources, building a shelter and fighting the only 3 bosses available. There was a multiplayer option. But it was mainly used in co-op to and hastened up the process of building monumental structures. The engine the game was built upon featured basic lighiting and pixelated graphics and sprites used were simple. The sounds and music used reminded the days of using MIDI board. Though at this time even, it provided tremendous freedom in gameplay, providing hours for creating wondrous 2D architectures despite having a small variety of blocks.

Update 1.0.5 further enhanced the gameplay mechanics. Introducing the aspect of buffing your character with various potions. Having the in-game Guide NPC help you with crafting. Also added overall bug fixes and a fine layer of polish to the existing game.

Terraria 1.1 , was the first big change in the game.There was a lot to do now.  Now there were new biomes, corruption and it’s counterpart the hallow. The biomes also had underground sections with their own exclusive enemies and loot and had the feature of spreading over unaffected areas. A new boss called the Wall of Flesh was added. This paved the way for the all new hardmode. Here enemies were significantly stronger and had better drops. In this mode, 3 new bosses were added  and each of them required thorough preparation before fighting. How the game changed from a  basic sandbox game to a RPG or Role Playing Game was quite apparent now.

The latter updates introduced Christmas events, where on dates from 25th of December to 1st of January, a new NPC, Santa Claus would come with new items. This was the first seasonal update.

After this update there was a hiatus from the developer and there were questions whether the game’s development was abandoned or not. Yet even by this time, the game’s success was very significant. Games like Starbound and Edge of Space already started to diversify the genre of gameplay Terraria introduced.

The hype was real. The sudden resurgence of  support and new content sparked off a celebration in the Terraria community. The game got a fresh coat of paint – most sprites and graphics were updated, a whole new biome was added and older ones were improved. The new blocks, items and mechanics gave birth to many new and creative designs. With the developers saying there’ll be new content updates will continue to come, the community would be very busy indeed.

Post 1.2, smaller updates introduced new events, such as the Halloween event along with Pumpkin Moon event. Here you’d fight endless waves of difficult enemies in order to get better and better loot. 1.2.4 introduced the fishing mechanic, which if you would exploit, lets you completely avoid mining as you can acquire almost all kinds of ore from crates. Yes, you could fish up crates from the water among fishes. Quests were added for the first time, In quests you would exchange a unique fish for some unique loot.

With 12 million copies sold and active communities on reddit and an official website, coupled  various partnerships, such as the One Drop Yo-Yos range of Terraria Yo-Yos which you can also play with in-game, a comic book from DC and a range of toys as well, Terraria has become a very significant brand for a 2D sandbox game.
With 1.3 , the developers aimed to further streamline the game’s quality of life and mechanical elements. Such as the ability to play with friends directly through Steam, and save your games on cloud storage.

The update also introduced achievements, and went overboard with character customization and multiplayer modes. New events like the martian madness added more variety to the end game. As well as an Expert Mode, for the truest of Terarria veterans who wanted greater difficulty. The game’s supposedly final boss, the moon lord was added who’d really put your fighting skills to the test.

The most recent update 1.3.1 added further advances to the wiring and electronics mechanic of the game. Allowing you to construct complicated structures through the use of Logic Gates, Sensors etc. At this current time, the devs are working on future updates which enhances other untouched nodes of the game, such as the underground desert biome.

There are a quite a few mods for the game which have enhanced the game before the devs got their chance. My favorite was TEdit, which allows you to build designs without any resource limitations, though it’s a separate application.

The community of this game has been very active since it got its first significant updates. On Reddit you can always see a weekly competition for building. Artists and illustrators frequently make stunning imagery that adds extra life to the game’s simple and pixelated art style. The wiring and electronics of the game is quite advanced and there is no end to how it can be manipulated to serve your needs.

Terraria as a game has left a considerable trail of memories for me. How I used to mine for days in previous update to spend the same amount of time building an intricate and lovely castle in recent iterations. I cannot forget those first few sessions where I was genuinely got lost in a dark cave because I didn’t know how craft torches , or summoned a boss then died quickly because I didn’t craft a decent armor or weapons. Then on later playthroughs I would cleverly build my base at a height from the ground so baddies wouldn’t enter, or make an arena the center of the map then place lava on one side so enemies only spawn on the other.

The game’s evolution has inspired me greatly to how to develop and support a game, and to have a community to back up for it. Sure I play lots of popular games like Dota 2 or Counter Strike. But Terraria always feels like getting together with your old group of friends after many years of parting. A sense of familiarity I’ve learned to remember.It’s definitely one of those games that stays with you as long as you stay with it.