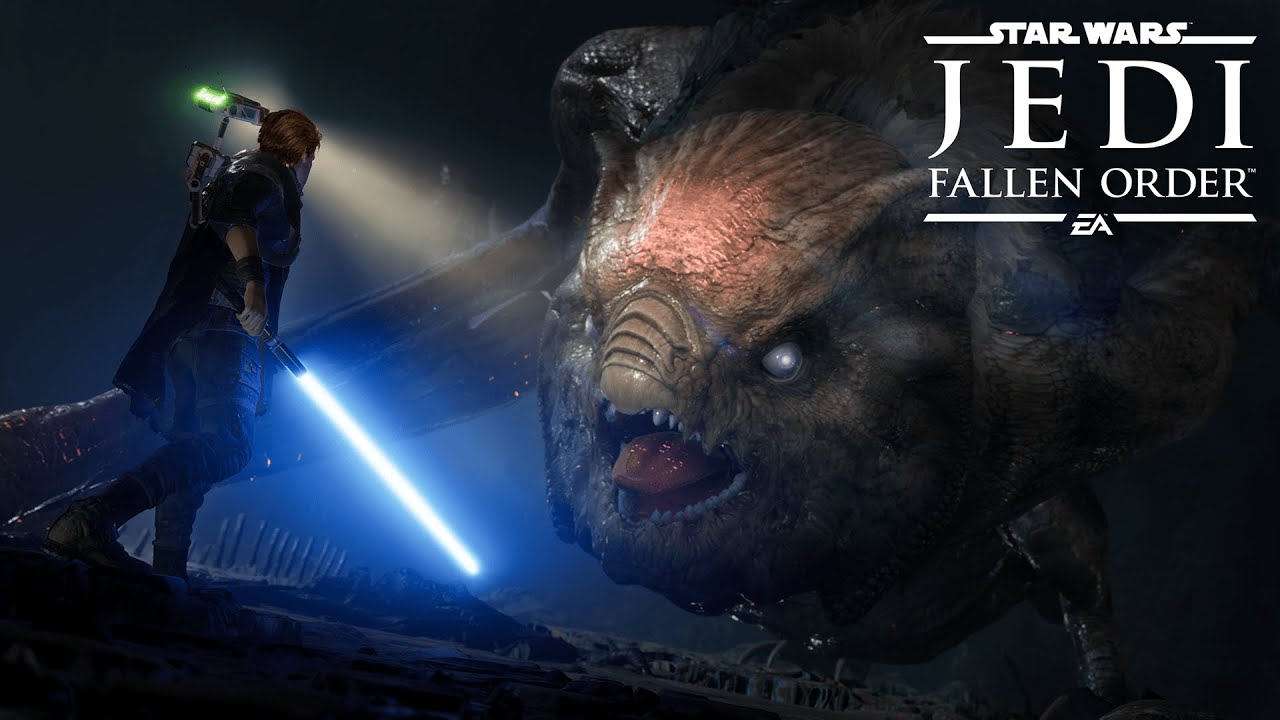 Star Wars Jedi: Fallen Order is an action-adventure game developed by Respawn Entertainment and published by Electronic Arts. It’s been a long time since we had a singleplayer entry to the Star Wars games and Jedi Fallen Order makes it worth the wait.

The story of Star Wars: The Jedi Fallen Order follows plays out between episodes 3 and 4 of the movies. Order 66 has been executed, and Jedis are being hunted throughout the galaxy.

Cal Keestus, a young Padawan and our hero manages to lay low from the empire until an unfortunate incident blows his cover apart, causing him to make new allies and foes.

The game does a good job of blending in with the existing events that have occurred in the Star Wars narrative and simultaneously deliver its own story. The characters are really well done and the story manages to hit a few emotional tones, especially if you are a fan of the movies.

It’s also worth noting that the story is considered canon, so this might as well be the deciding factor for hardcore fans sitting on the fence.

BD-1, a droid that you will meet early on in the game becomes one of the highlights of your journey. The bipedal cute droid is cleverly woven into the game’s mechanics and plot to make him memorable and almost the secondary protagonist.

The game does have the occasional pacing issue and some of the characters feel a flat at times, but the game manages to end before the plot becomes too cumbersome.

Star Wars Jedi: Fallen Order feels like a successful hybrid of the Uncharted series and Dark Souls. The player jumps runs and climbs through the game world, solving puzzles and the overall platforming sequences feel like an Uncharted game.

The structure of the worlds and the combat, in turn, is similar to the Dark Souls games. You explore an interconnected world full of jungles, space stations, and discover shortcuts that loop back to your initial starting point. The combat is challenging and skill-based, you have to dodge parry and attack with though, as the enemies will take you down if you just smash buttons on higher difficulties. Cal can meditate to save and refill his health packs.

Even the dying mechanics take a page out of the Souls games, as you will lose your XP to the enemy that killed you but you can regain it by defeating them.

But despite being clearly inspired by these games, Jedi Fallen Order manages to bring in the unique charm of the Star Wars franchise and blends it all together to create a wonderful experience by blending in these two very different genres.

The battles in Star Wars Jedi: Fallen Order stand out and feel epic. Because the enemies are not just meat shields and Cal feels powerful with his Jedi powers, the game manages to have the best combat in any Star Wars game. Every enemy in the game has their own attack patterns. Shots from blasters must be blocked and thrown back with your lightsaber, and boss fights can be an exhilarating experience.

Speaking of the lightsaber, it hums and feels just like any fan would expect it to. Its also fully customizable, and you can find additional components by exploring the world.

Your lightsaber isn’t the only thing that’s customizable, and you can change the Cal’s poncho and BD-1’s paint job.

Enemies are well varied and consist of the iconic Stormtroopers to exotic alien creatures. Every planet has its own challenges and enemy types to defeat.

Fights can often get hectic, as the game will constantly throw more than one enemy at you. It’s in these times that your quick thinking will need to come in with quick reflexes.

The difficulty in Jedi Fallen Order is another thing that’s been well done. The lower difficulties as intended do not pose a challenge, and for someone looking to enjoy the story, it’s a great choice. Someone looking for a challenge, however, can take their shot at Jedi Master or Grandmaster. The game lets you know exactly which mechanics will be affected by the difficulty setting and by how much.

The control scheme is really well-done and works flawlessly. In combat, your moves are easy to use and give a smooth gameplay experience

Defeating enemies and scanning objects in the game world gives you XP. Earning skill points gives you the option to unlock improvements that can be selected when meditating. Your force powers, however, are unlocked by flashbacks that reveal bits of past about Cal’s past, and his training under his master.

Once unlocked, your force powers can be further upgraded by improving them using the skill tree. Cal can use his power to manipulate environments, destroy obstacles or overwhelm his opponents.

Like any good Metroidvania movement and level design is crucial. Jedi Fallen Order allows you to zip around, climb up vines and elevators. Movement feels snappy and good. As for level design, the game features some of the best I have seen. The maps are well thought out and give you a great deal of freedom to plan your approach, while simultaneously hiding shortcuts, chests and other collectibles in challenging yet not frustrating locations. As a result, exploration feels fun and rewarding.

There’s a good deal of side content and tombs to explore, and the game will take you about 30 hours to complete everything.

There are no microtransactions, no loot boxes, and the game rewards your efforts and time.

As I navigated the worlds of the game, the environment, the sounds, the creates, in fact literally everything was meticulously well detailed. As a fan of the Star Wars franchise, I was delighted to recognize so many things that I honestly did not expect to be in this game.

The locations feel varied and richly detailed. From Bogano to Dathomir, each world is a joy to explore.

The iconic lightsaber looks and feels just how you would expect it to feel and it felt epic to wield it around. The characters and creatures that you will come across are fantastically well detailed and animated.

The soundtrack was done by Gordy Haab and Stephen Barton and it does an excellent job of creating the feeling that you would game in the movies.

Unfortunately, the game has very unstable framerates and frequently dips resulting in a very uneven experience. This is very noticeable and can hamper the gameplay quite a bit.

Star Wars: Jedi Fallen Order has wonderfully done mechanics that makes the game feel fun. The atmosphere in this game is tremendous, and it goes hand in hand with the gorgeous visuals.
Combined with the excellent atmosphere and world design, Star Wars Jedi: Fallen Order is the best Star Wars game in years and one of the best games of this year.