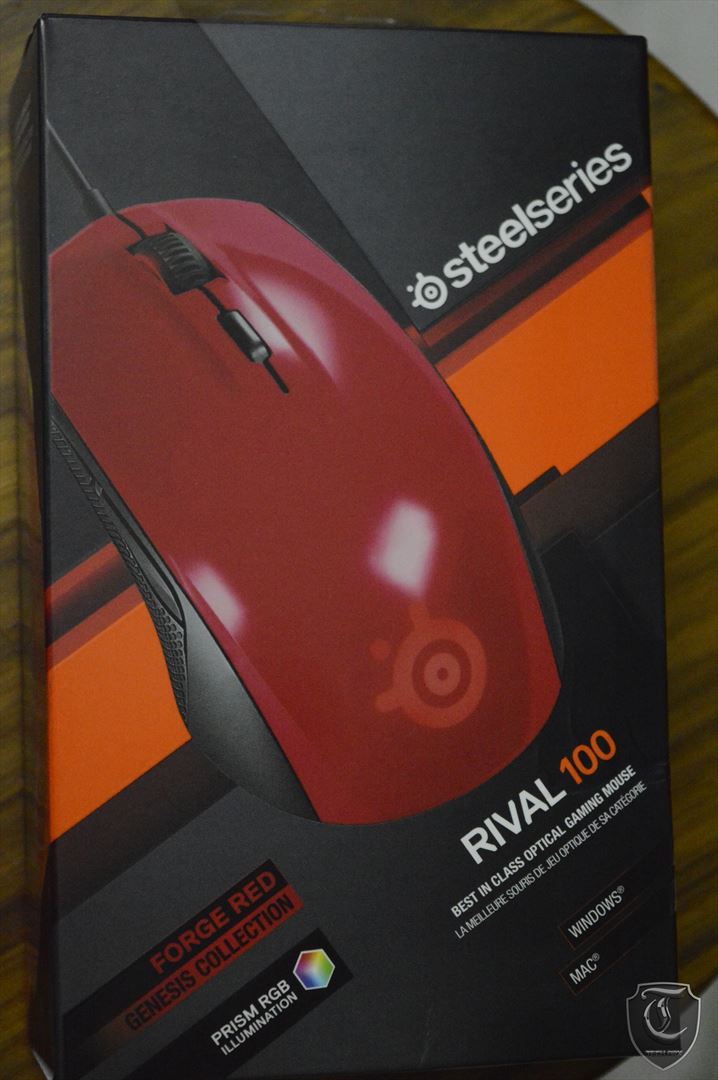 When a company like SteelSeries asks its engineers and designers to go back to the drawing board, you can expect a product which will either prove to be a success or something that will betray the hype. Today’s product on the spotlight, The SteelSeries Rival 100, thankfully is a moderately successful creation.

Set out with an agenda of creating a mouse with all the modern and necessary upgrades, SteelSeries used all their resources to bring forth the Rival 100 which ticked off all the right points on their board and didn’t hurt the pocket of the consumer. According to the claims of the Danish Manufacturer, the mouse delivers 40% higher tracking accuracy and an increment in the movement tracking speed up to 33% than all other competing mice at the same price point. 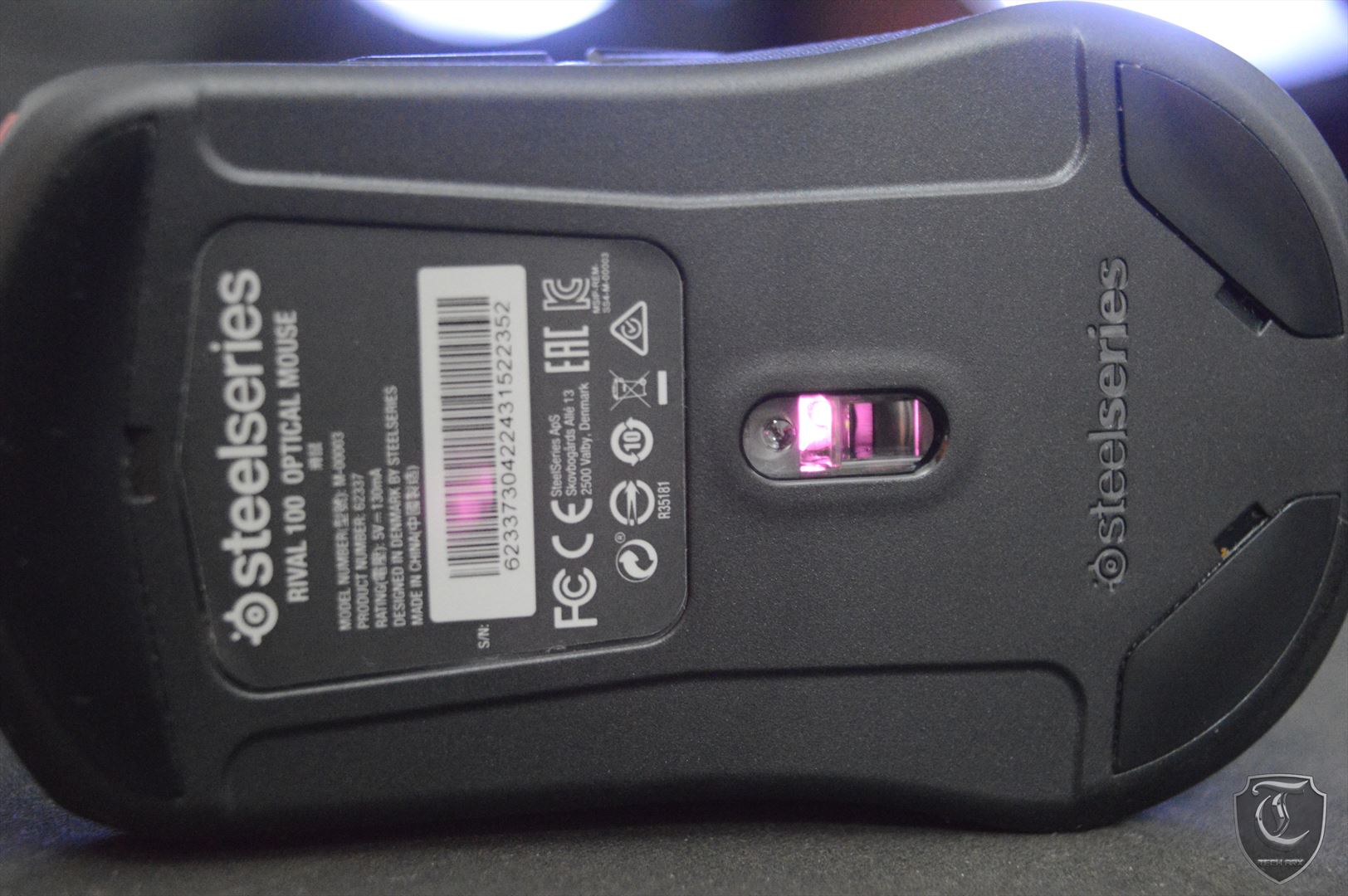 Rival 100 uses a custom PixArt A3050 Optical Sensor, the SDNS-3059-SS Sensor. Rival 100, according to SteelSeries promises 143IPS and 1:1 tracking speed. The most important thing is that the mouse has 8 usable CPI or Counts per Inches stages, starting from 250CPI and increasing on 250CPI scale up to 2000CPI and then a major 2000CPI jump resulting in a final stage of 4000CPI. (CPI is a determiner of sensitivity which can also be expressed by DPI or Dots per Inches also. They’re basically the same values but in different words and according to SteelSeries, CPI is the correct expression.) However, these stages are preset and users cannot tweak and fine-tune their settings which will prove to be a little discomforting to the hardcore gamers and users. Personally speaking, I would suggest using the mouse at 250CPI-1000CPI step to avoid any unintentional jitter and Cursor instability for both new and veteran users. I feel that the mouse needed a little budget upgrade so the sensor issues could’ve been resolved.

Rival 100 has 4 preset polling rates which are 125Hz, 250Hz, 500Hz and 1000Hz respectively. The mouse also has an acceleration and deceleration settings that can be tweaked according to the user’s personal choice. The Rival 100 sports an angle snapping settings which can prove useful to normal users but raw input settings would be preferred by Twitch-shooter players. However, there is a palpable lack of Lift-off settings changer which is quite the turnoff considering how this mouse can be popular among hardcore gamers. 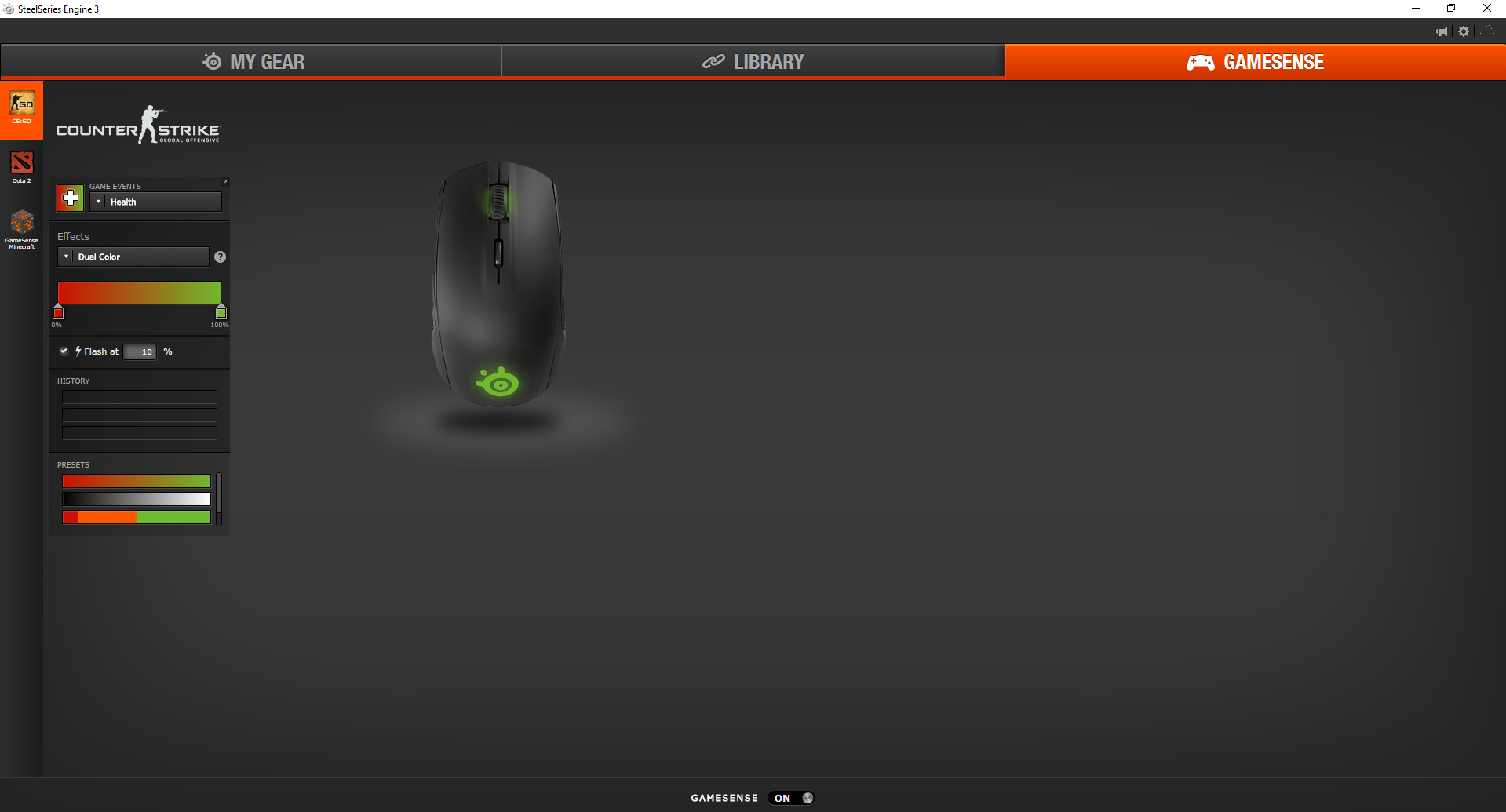 Rival 100 uses the SteelSeries Engine 3 series software suite, sporting the Gamesense system which allows different colour settings for different situations while playing certain games. Currently, the Game sense is limited to only Counter-Strike, Dota 2 and Minecraft (for which you have to download the Minecraft Gamesense mod), but I would like to see it expand to more games.

The Prism RGB lightings are a nice addition considering the pricing and they aren’t too flashy. Those are added just to give a little bit of a flavour and it looks nice. 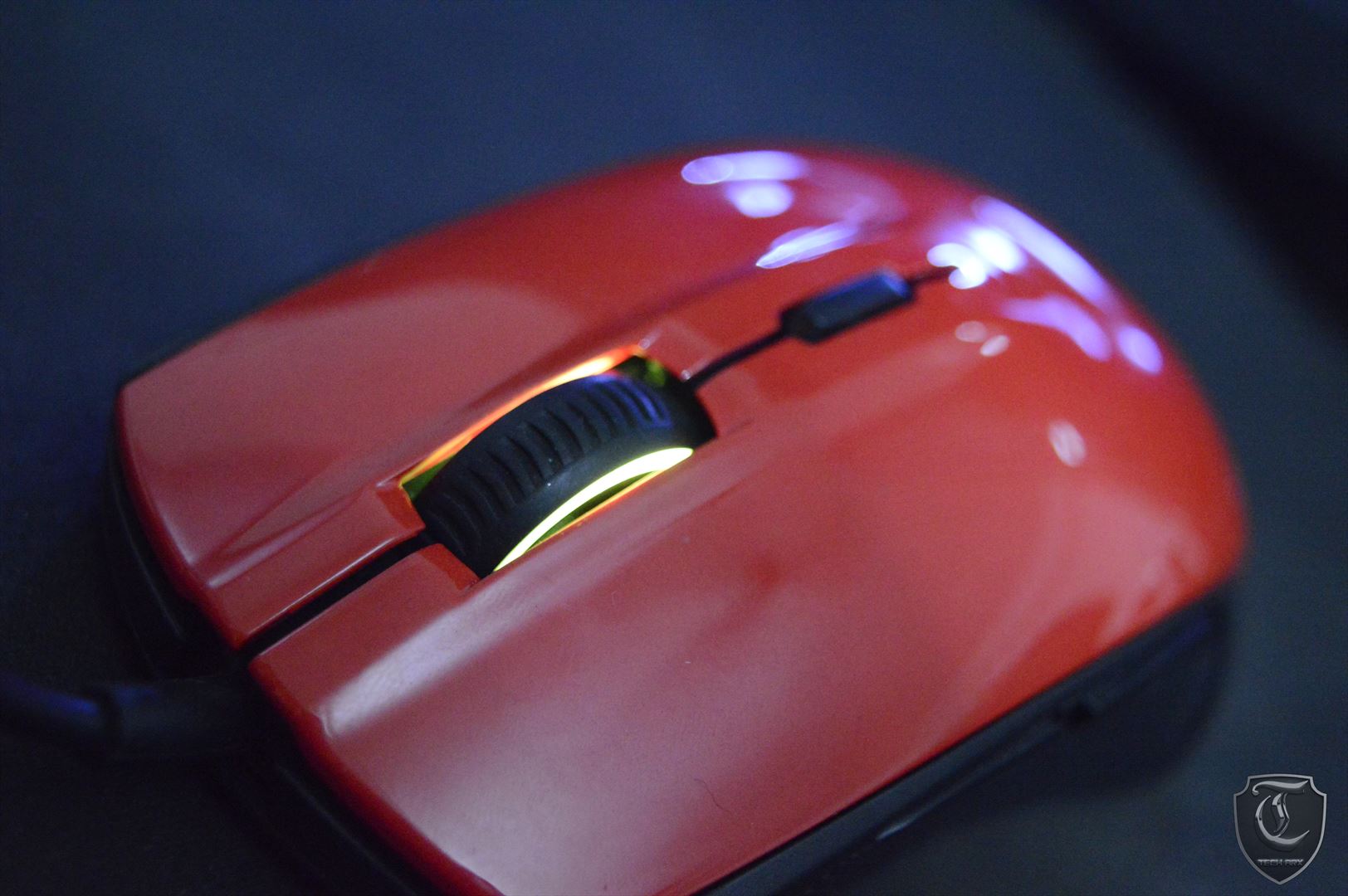 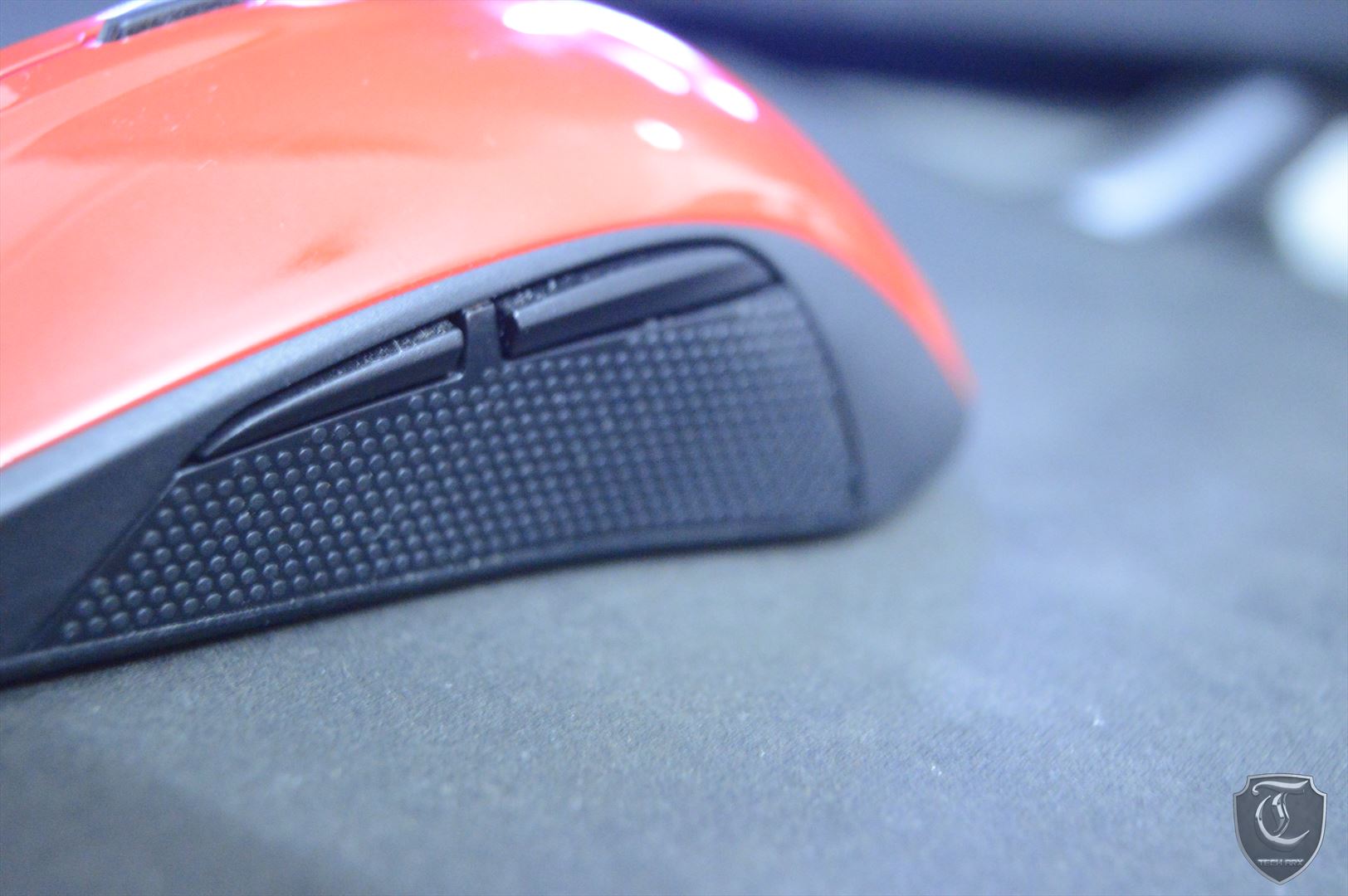 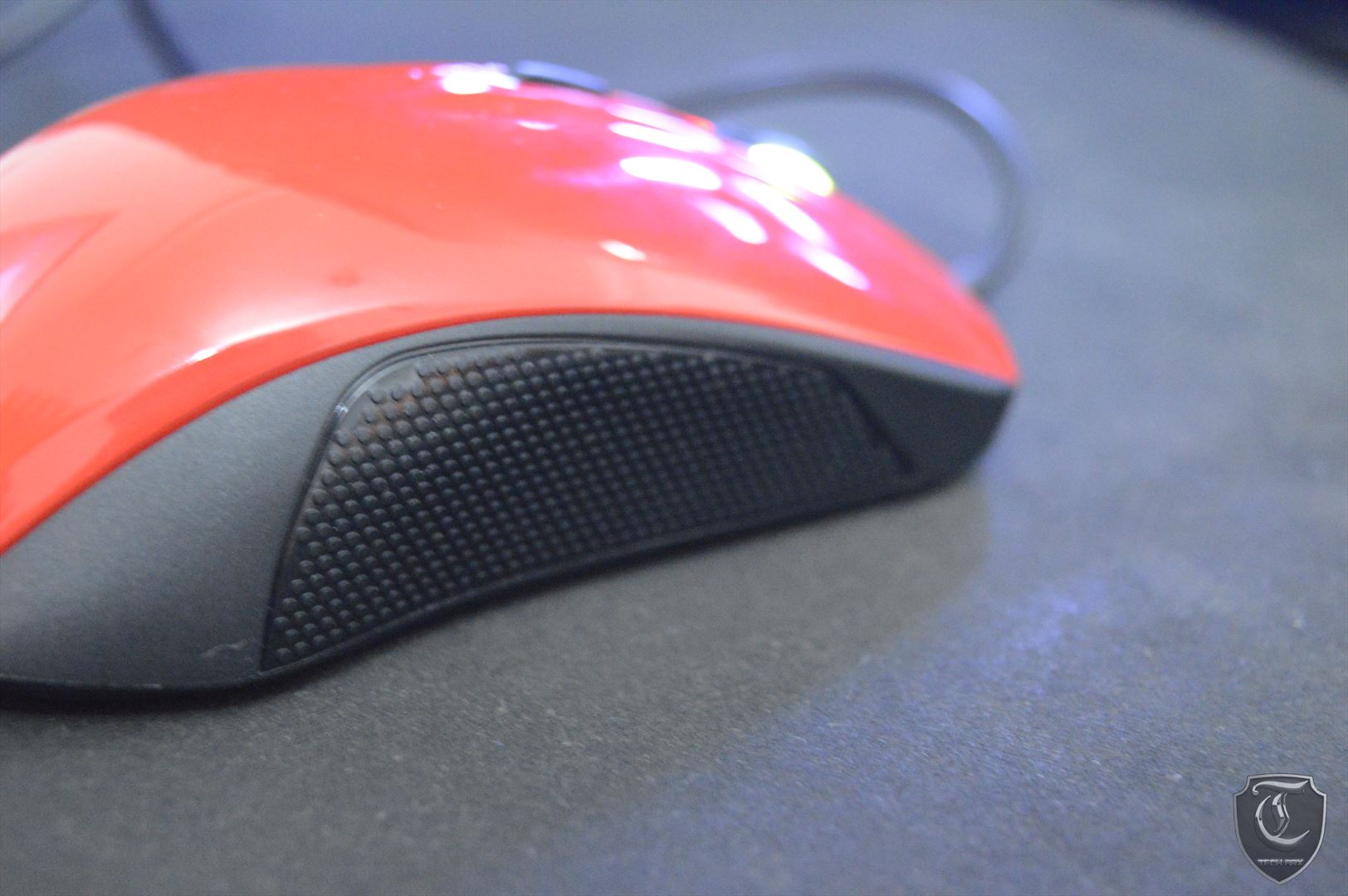 The mouse is ergonomic in design. Following the conventional mouse shape, the lightweight plastic build material providing a lightweight structure, weighing in around 90-120 grammes. The chassis provides a very sturdy build despite the weight. The Rival 100 is 120mm in length and 68mm in width, however, the mouse has a very low height, coming in about 37mm high which can and will prove to be an issue with people with bigger palms. Rival 100 supports all three nature of grips and is ambidextrous in nature, the product we received being a right-handed sample. The side grips sport some of the shiniest grips I have seen till now and they might prove to be a slight issue at first but this mouse gets relatively comfortable with each passing hour spent using it.

The Rival 100 box has the mouse and the Quick Start guide and that’s it. You don’t have to go through an extreme amount of things to use it. Simple and clean.