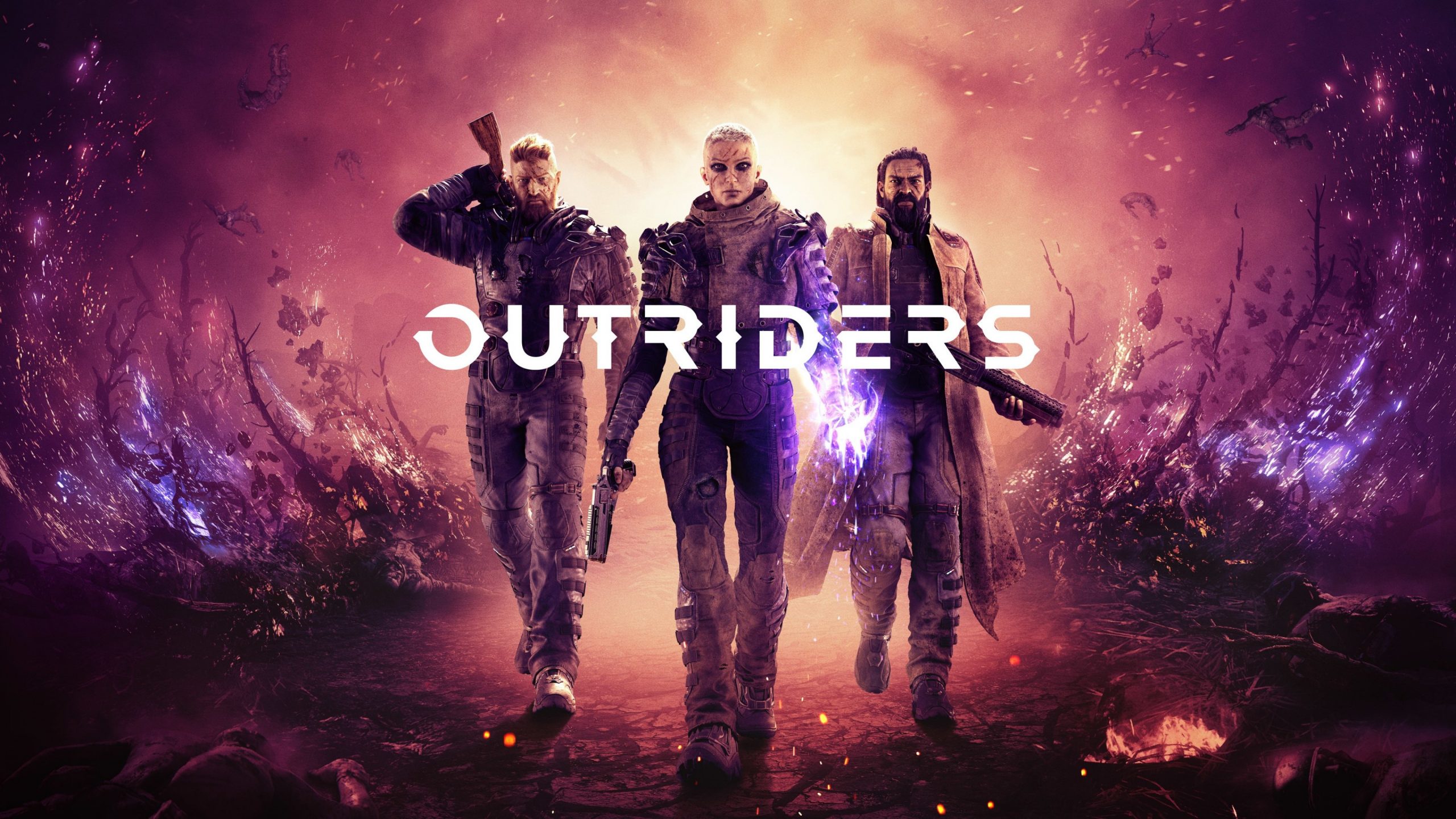 Outriders is a cooperative looter shooter developed by People Can Fly, the people behind games like Bulletstorm and Painkiller.
Despite a rather rough launch due to server issues, Outriders is quite frankly the most fun I’ve had with a looter shooter on launch. It manages to nail a lot of things that other more ambitious titles took ages to figure out.

In a genre so saturated with mediocre titles, and tone-deaf developers that refuse to listen to community feedback, People Can Fly has managed to create a product that manages to tick so many boxes. Sadly it’s not all roses, and there are a few thorns that left a sour taste in my mouth but not enough to bring down my overall enjoyment by a lot.

The story of Outriders is standard sci-fi fare. If you’ve played Mass Effect: Andromeda, this will seem like a similar experience. Humanity has managed to ruin earth with its constant destruction of the environment and now faces extinction. Now you and other chosen colonists leave behind Earth in order to settle on a new golden world – Enoch.

You play as an Outrider, an elite group of scouts and soldiers who are tasked with charting the planet in order to make sure the planet is safe for the rest of the colonists. And like any other sci-fi game worth its salt, nothing goes according to plan, and everything that can go wrong does go wrong. Your group runs into an alien storm – an anomaly that pulverizes anyone it comes in contact with. Except you, and as you find out later on, a handful of others.

Plot happens and you wake up a few years after being put into cryo and find out that humans have done what we do best, ruin everything, and murder each other. Factions have been emerged, with psychotic insurgents on one side and the last remnant of civilized society on the other. Godlike metahumans called Altered have emerged, with crazy powers, and you happen to be one of the chosen few.

The rest of the plot follows through with quite a few twists and turns but sticks mostly to established cheesy tropes. It’s an engaging story, and the amount of lore that People Can Fly has stuffed into a brand new IP is unbelievable. For those of you who like to read through every little detail and soak in the lore, Outriders feels like it’s part of an established franchise and not the first game in the series. The entire world of Enoch, its inhabitants, and its history are brought to life thanks to the excellent world-building.

You start the game off by customizing your own Outrider, with a few options to chose from. There’s not a lot of freedom here, but at least you can change your character’s look any time you want.

There are four classes to choose from: The Pyromancer is your typical offensive mage, preferring to engage enemies from a medium rage and dishing out massive fire-based damage. The Trickster is the fast-paced rogue type, who dashes into risky situations, deals damage before running back to safety again. The Devastator acts as the tank, absorbing damage and drawing aggro. Finally, the Technomancer is the long-range support class that prefers keeping distance while healing and purging teammates, deploying gadgets, and debuffing enemies.

There are no set limits on what you can equip, however, and you are free to spec into whatever playstyle that you wish to, as long as you have the mods and the type of gear required to support that playstyle. Some classes are obviously going to be better at doing certain stuff than others thanks to their inbuilt talents, but it’s still possible for the tank to be a hybrid DPS/tank or for the Technomancer to get up close and personal instead of picking away at enemies from a distance.

Despite having co-op as one of its advertised features, the game is extremely solo-friendly and scales difficulty, NPC density based on the number of players in your party. So a 3 man party might have the advantage of creating synergies and supporting each other, but they will have to deal with more enemies that hit harder and take more punishment. Because you can actively heal yourself with your class’s default passive healing and the plethora of mods that add different ways of building resistance, siphoning health, or adding more armor, and the well-done enemy NPC scaling, playing solo doesn’t feel punishing at all.

The game’s difficulty is handled via world tiers, a meter that fills up with the more enemies you kill. Just like Diablo III’s difficulty levels, these progressively increase difficulty, adding new types of higher-level enemies, but also rewarding you with better loot drops. You also gain constant XP with every enemy you kill as well as quests. Leveling up increases your stats and occasionally rewards you class points, allowing you to further fine-tune your class to suit your playstyle. Doing certain things also increases your Accolade levels, which in turn rewards you with cosmetics.

Outriders encourages offensive gameplay and doesn’t rely on bullet spongy enemies to make the game feel difficult. You are supposed to proactively engage the enemies and play to your class’s advantage in order to refill your health. Enemies will constantly swarm you, flank you and try to outmaneuver you, and the AI here is really, really good. So sticking behind cover and chipping at the NPCs health isn’t going to work here, especially if you are playing solo. Killing enemies in close range as a Devastator lets you refill health, while a Technomancer constantly siphons health based on any damage they deal, encouraging you to constantly engage the enemy on your own terms.

The shooting is really satisfying, every weapon feels good to use, unique, and mostly well balanced. Every gear from Rare onwards comes with a mod that augments your skills or stats in some way or the other. There are mods that let your weapon shoot flaming bullets, let you warp instead of the standard roll, and even increase charges for your skills. The best thing about Outriders gear system is that no gear is truly useless, and if you want to stick with a gun from start to finish, you can. This is because of the fantastic crafting system, that lets you salvage gear in order to extract their mods, which you can then apply to any gear you want, an infinite number of times. You can also level up the weapons to your current level, and increase their rarity. So if you find a good common gear that has really good core stats, you can upgrade its rarity to Epic. This is something most co-op/looter shooters think of as an afterthought, instead preferring on increasing the grind to artificially create a timesink, that often feels frustrating. I’m really People Can Fly put so much thought into this system and made crafting be actually a useful mechanic.

The level design is mostly linear, and you progress a linear path to unlock new areas, which in turn have sidequests, bounties, hunts, and collectibles. There’s a decent amount of content on offer here, not to mention the substantially meaty end game that features completely new levels based on the existing biomes called Expeditions.

Unlike most recent releases in the genre, the game is not designed to be a “game as a service”. The game is finished and complete, with more content only coming if players want it to. There’s no cut content here to be sold later on as DLC or season pass, and it feels refreshing to see a game take this old-school approach of content delivery here after such a long time. In fact, it’s been really long since I really wished a game had more DLC planned for it because I am sucked into what the game offers.

But as I mentioned early on, there are a few bizarre gameplay decisions that I don’t understand. Firstly, why would you put online only restrictions on a game that is primarily focused on single-player with no competitive aspect to it? I understand that cloud comes with its own benefits and this prevents cheating, therefore rewarding legit players. But the downsides are just way too many, and the player base is suffering due to this. Launch day was an absolute nightmare, with frequent disconnections and instability. Even with all the issues sorted out, there’s always the odd chance that the servers might suffer a hiccup or the player suffers from an internet shortage themselves. The last thing you want is to lose all your hard-earned gear because your connection gave out. There’s a lot of games in this genre that have co-op but are not online only.

Secondly, for a game about godlike human beings that can teleport and blink around the entire battlefield, there’s a surprising lack of vertical movement. You can’t jump in this game, and if there’s a 2-inch barrier between you and an accessible area, you better look for the stairs, because there’s no way you’re teleporting your way around this. There are also a few QOL omissions in the game, like being able to lock your gear to prevent it from being sold or dismantled by mistake, auto equipping the best gear, and the UI feels mostly unintuitive and slow. There’s also no pause, in a game that often requires you to play for hours in order to go through a zone, the game is liberal with its checkpoints but good luck if you need a bathroom break while on a boss fight. For a game that has implemented often overlook features, like the incredibly useful autoloot, the lack of these other more common features feels odd.

Outriders is a mixed bag when it comes to visuals. The environments are varied and awe-inspiring, with stunning vistas and dystopian landscapes, dense forests, and charred wastelands. Meanwhile, the character design feels uninspired, they look unique from an aesthetic standpoint, the texture and features themselves on these characters feel disappointingly early previous gen. There’s also a slight lack of diversity in enemy variety as well.

The guns and armors are a different story, and there are quite a few outlandish designed gears that often give games like Destiny 2 and Borderlands a run for their money. Fashion is a very viable side component of this game, and the player base is already coming up with some really cool-looking toons.

Where the game completely drops the ball are the cutscenes, with awkward camera angles and jittery camera movement in general. Clothing often also glitched out, resulting in awkward scenes where your cape was stuck in the middle of a waving animation.

The sound design is well done, and the OST is varied, with suspenseful music while exploring abandoned labs and mines, and then suddenly pumping out adrenaline-rushing music when you find yourself in the middle of an ambush. The voice acting is serviceable but they’ve done a good job at making the characters sound like how you would expect them to. The guns and gadgets sound great and there’s a satisfying crunch when you hit a captain with your rocket launcher.

On the performance side, the game was played on a PS5 and a PS4 Slim. The game looks and performs best on the next-gen console as expected but even the trusty old PS4 manages to dish out mostly 30 FPS with a few dips here and there.