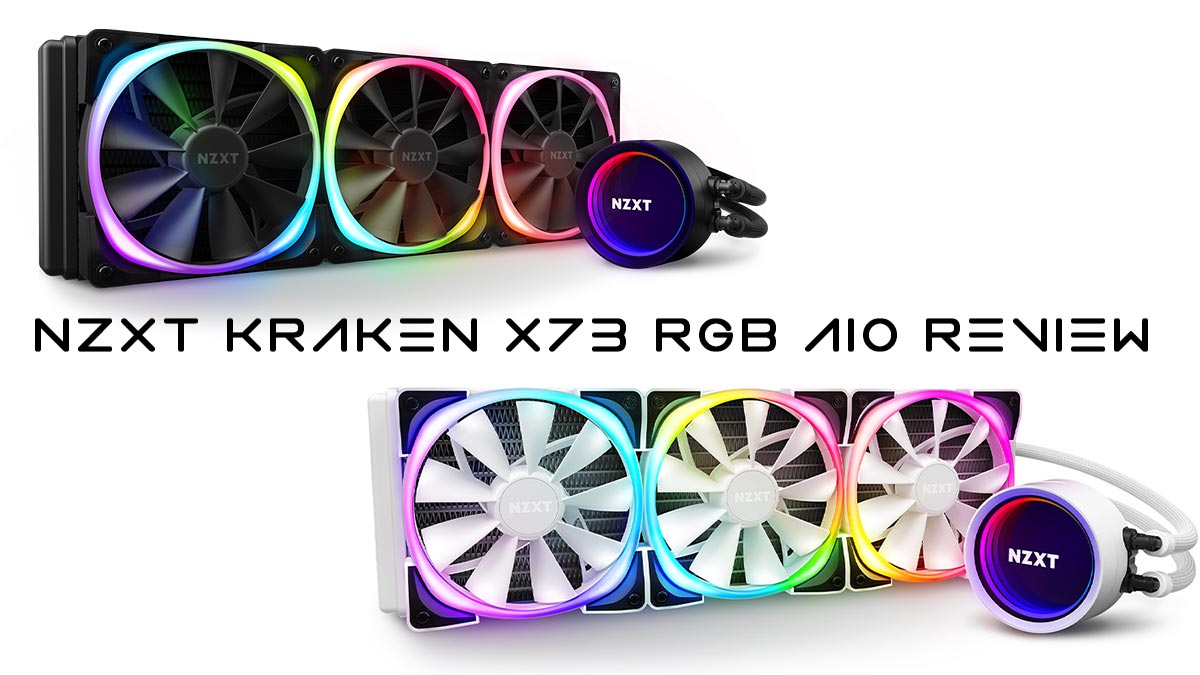 NZXT’s catalog of all-in-one (AIO) coolers has a little something for everyone. The Kraken Z, Kraken X, and Kraken M series had every stack filled up from the enthusiast crowd down to the entry-level. Today we will be checking out something from the higher-end X Series from NZXT.

NZXT essentially did what everyone is doing in the CLC cooling game these days. They are taking the best AIO design from the OEM’s (Asektek) in this case and then it’s a round of CTRL+C and CTRL+V of ideas till they are satisfied with the design. Today, we will be taking a quick look at the Kraken X73 RGB AIO. The X73 comes with a new redesigned pump and block and of course a dash of RGB in the right places.

Before we go further, let us get an idea of what we are dealing with by taking a quick look at the specification:

From a cursory glance, we can see the X73 has the new V7 block from Asetek. The head unit is 80mm in diameter, and it stands 55m in height. The housing is made of black plastic.

The pump speed in this new generation is variable and hovers between the 800rpm to 2800rpm mark. Power is supplied by SATA power lead on the pump, drawing 0.3A over the 12V line.

The radiator is 121mm wide, 394mm long, and it is 27mm thick (which is standard for mainstream AIO’s). The material is aluminum and painted black to match the rest of the unit.

The fans are pretty standard fare for NZXT. We have a 120mm unit running between 500 RPM to 2000 RPM delivering 73.11 CFM of airflow. The pressure is 2.93 mm H2O with a somewhat audible sound range of 36.5 decibels. The seven blades and the hub runs on a fluid bearing and consume 0.3A and 3.84 watts to run up to specs. Compatibility wise the NZXT Kraken X73 RGB AIO can handle anything coming after LGA 775 and on the AMD AM4 and TR4.

So overall a pretty nice package for a 360MM CLC AIO. The purchase determining factor will always be the price since any market these days is extremely price-sensitive due to shortages.

We ran the Kraken X73 RGB AIO through a mixed gauntlet of games and CPU loads. On a decently clocked Rtyen 7 3900X on the B550 motherboard the cooler ran pretty coolly. Overall we saw a drop of 4.5C in Idle and around 3C at stock settings when running on all cylinders with some rendering aka Cinebench. On gaming, the difference was a bit narrower but well within the acceptable margins. All this while the ambients were at around high 20’s. We decided not to use an air conditioner since this review wanted to test the cooler’s capabilities in a hot and humid climate primarily. Even with that handicap, the NZXT Kraken X73 RGB AIO managed to stay near the top and passed with flying colors among the AIO’s. But I have yet to find something to find that can give my D15 a run for its money.

The CLC AIO arena is a very saturated niche these days filled with many players trying to etch out a place of their own. That doesn’t necessarily mean everyone is good but we have yet to find someone extremely subpar. NZXT is someone who came to the party a bit late but managed to steal the limelight pretty easily. Overall the X73 RGB AIO is a decent package but it is not without flaws. Firstly, NZXT in its quest to integrate into its CAM ecosystem has made this a hard sell to anyone who is not looking for CAM or has any other NZXT components in their build. Also, the oversized pump tends to create problems with motherboards that have little space between the ram slots and the socket; with all slots filled up the pump head is too close to the Dram sticks in some systems. That aside props to NZXT for making the fans daisy-chainable and for the more than enough tubing size. This AIO can work pretty well in any big PC case.

Overall, if budget is not an issue one should definitely get the NZXT Kraken X73 RGB for their builds.