Today we are back again with yet another gaming headset review of the MSI DS502 Gaming Headset.

As you guys might be aware, when we talk about MSI, we don’t think of anything audio related rather motherboards and graphic cards come to our minds. I am really curious as to how MSI’s gaming headset is going to fare against the already stiff competition in the saturated gaming audio market.

To start off let’s take a look at the spec sheet.

The Spec sheet as usual isn’t really indicative of how the gaming headset would sound or perform in real world, but at least it gives a quantitative measure of the capabilities of the product, which btw are pretty common on most gaming headsets these days.

[nextpage title=”Visual Inspection and Build Quality”]
Let’s have a closer look at the product itself. 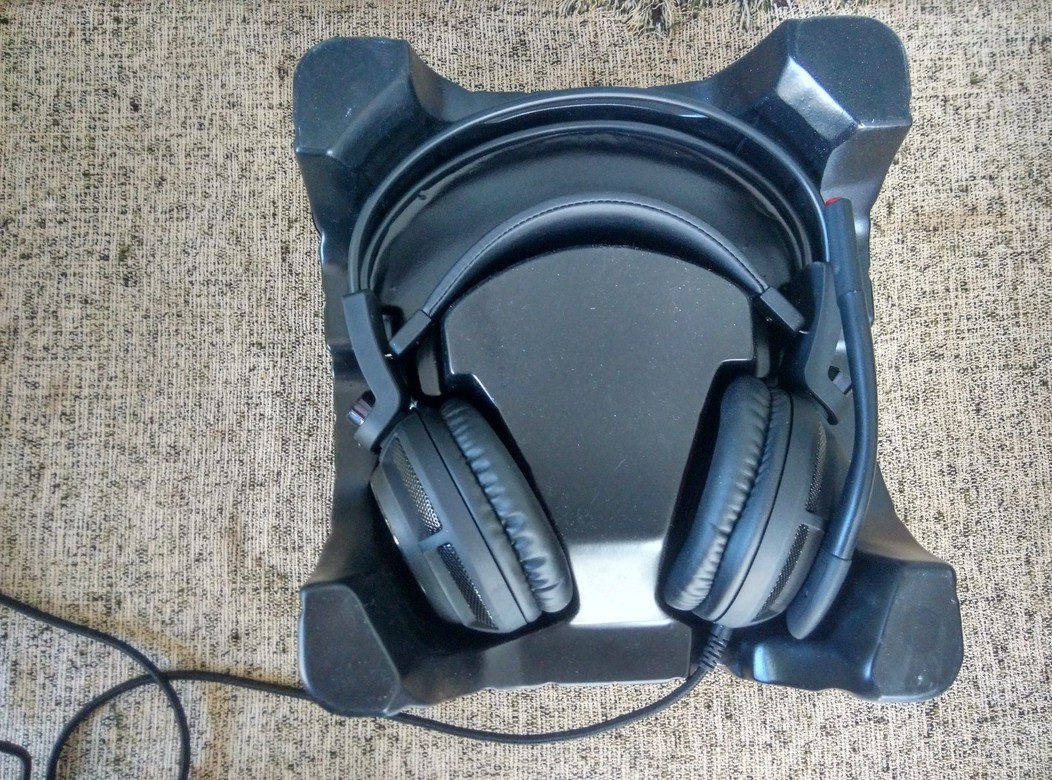 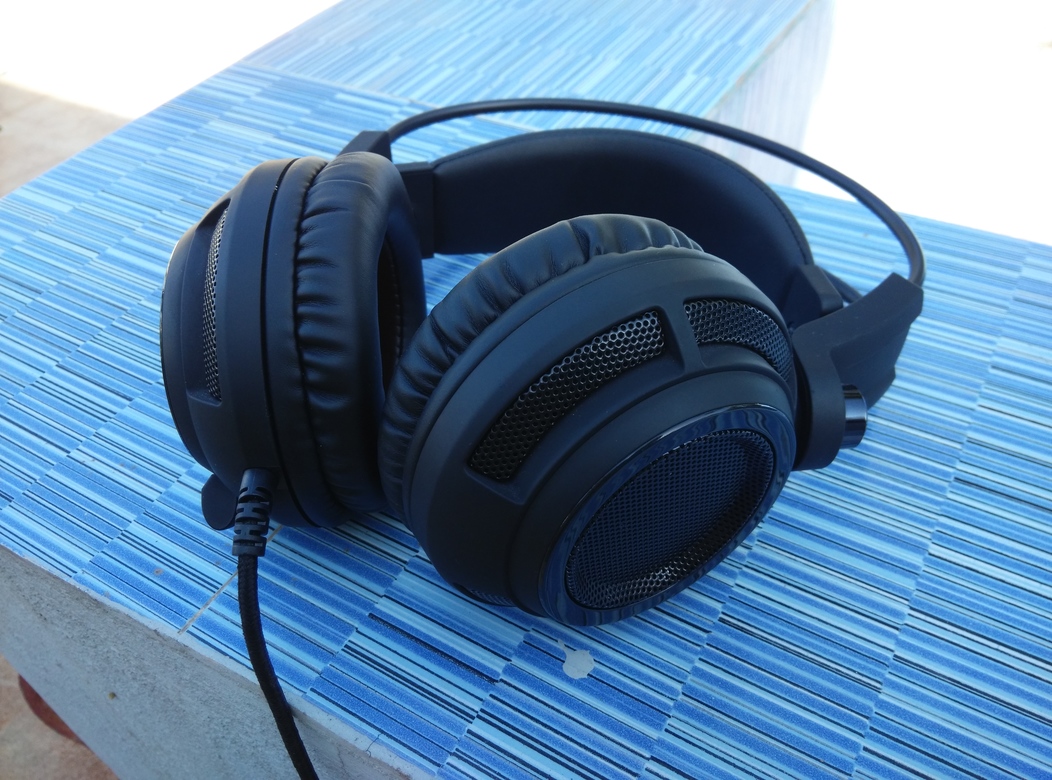 The design of product is very tacky or rather snazzy might be the right word for it.
Competitively speaking, the design does manage to set this gaming headset apart from the rest. 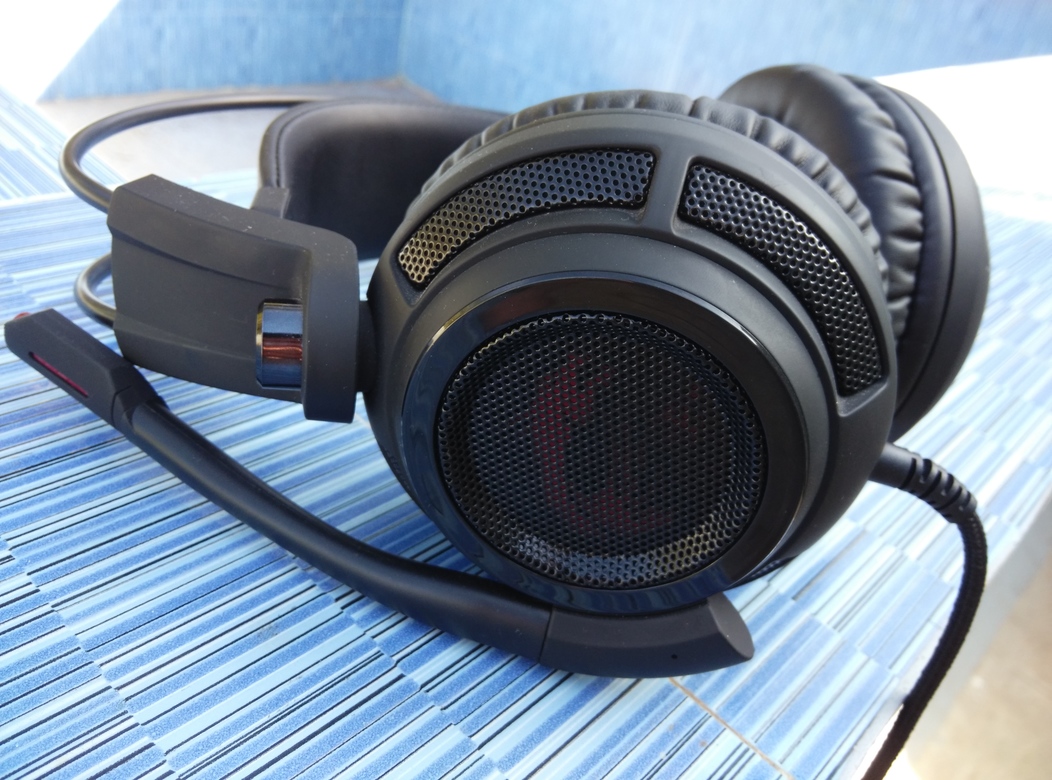 The headset is made up of a combination of rubberized plastic and metal and feels really sturdy to hold and can take drops with ease without getting damaged thanks to its light construction and rubberized body.
It comes with a very thick braided cable which is a good thing for longevity’s sake. At roughly 2 meters the cable is just the right size. 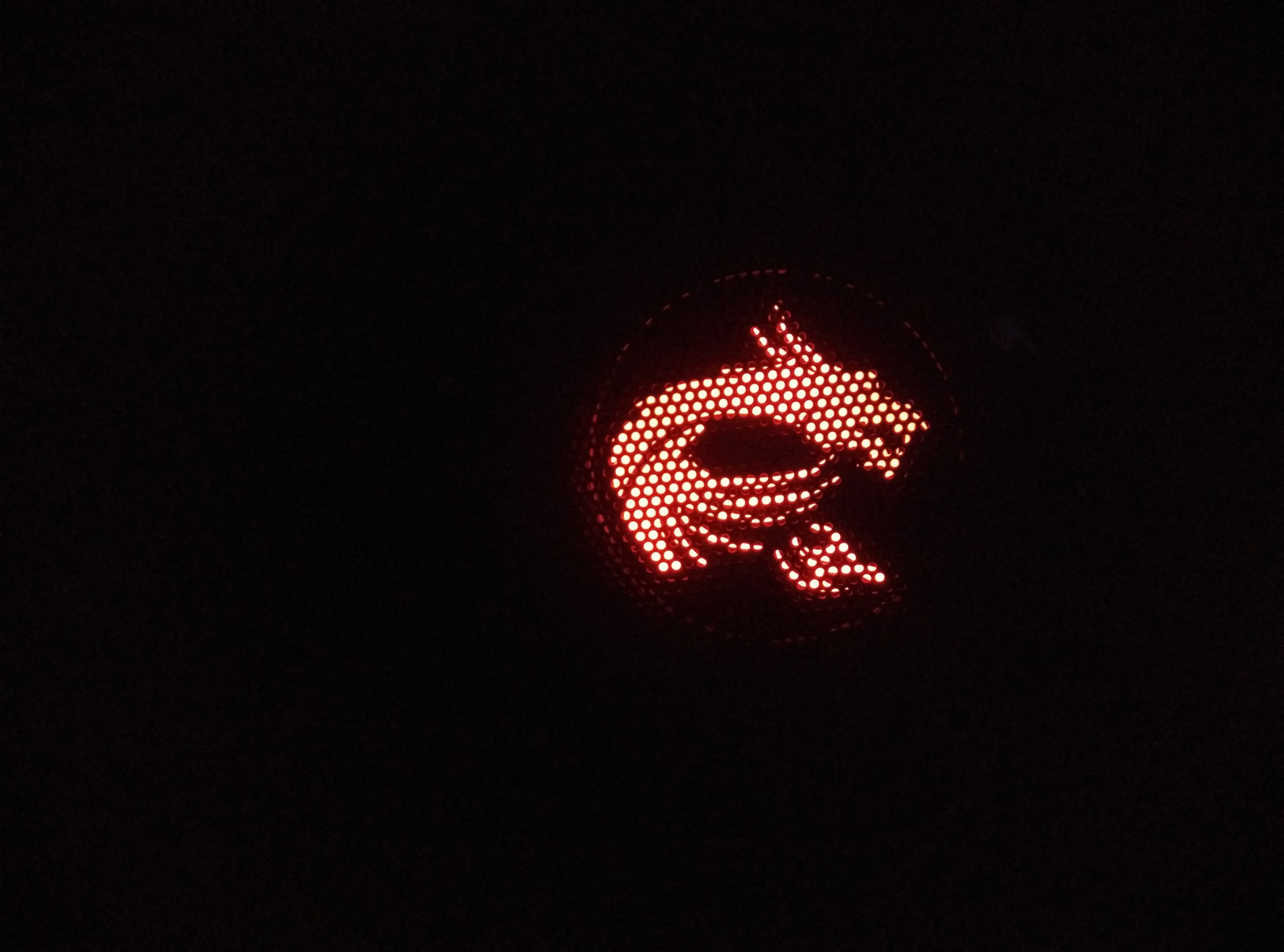 An eye catching illuminated Dragon Logo can be seen on either side of the cups and is purely a cosmetic addition. MSI DS502 gaming headset is pretty much black except for the insides of the ear cups which don a red fibre and the Dragon Logo which only illuminates in red. 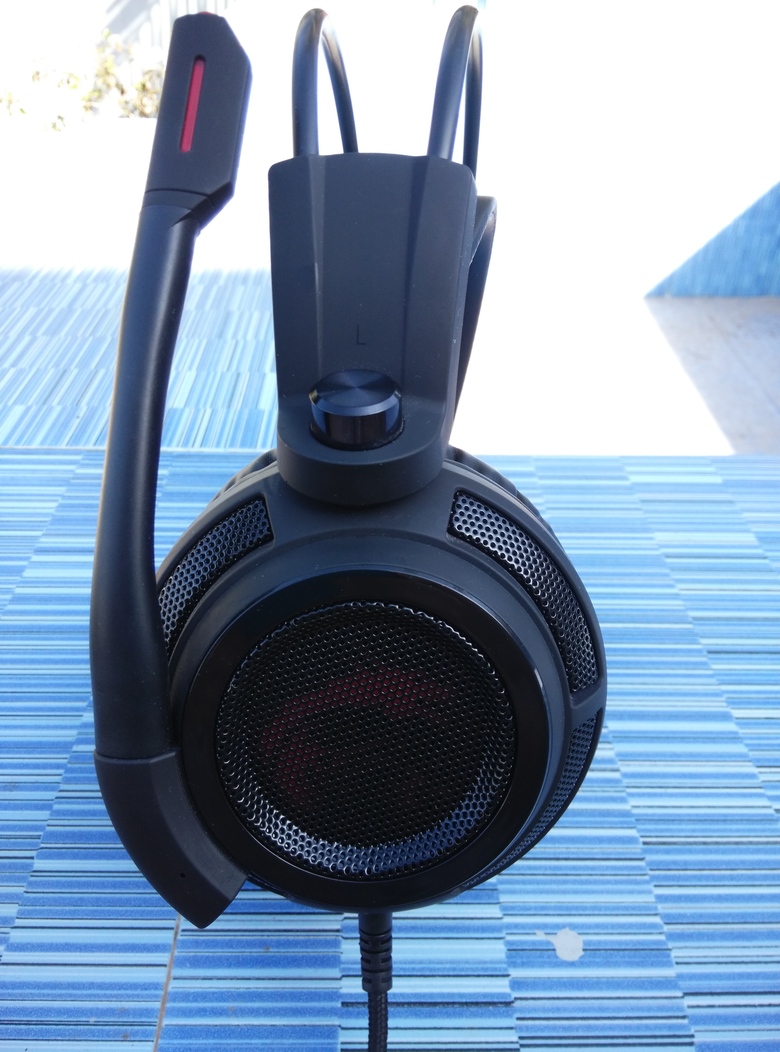 Headband on these headsets is made up of rubber and plastic, and is very light along with being self-adjusting, while it does make the headset lighter, this type of headband is more susceptible to getting damaged. The mic swivels off the left ear cup and moves into or out of place with fair ease, its flexible and comes with  a red LED indicating its activeness (ON – Illuminated/ Off – Non Illuminated). 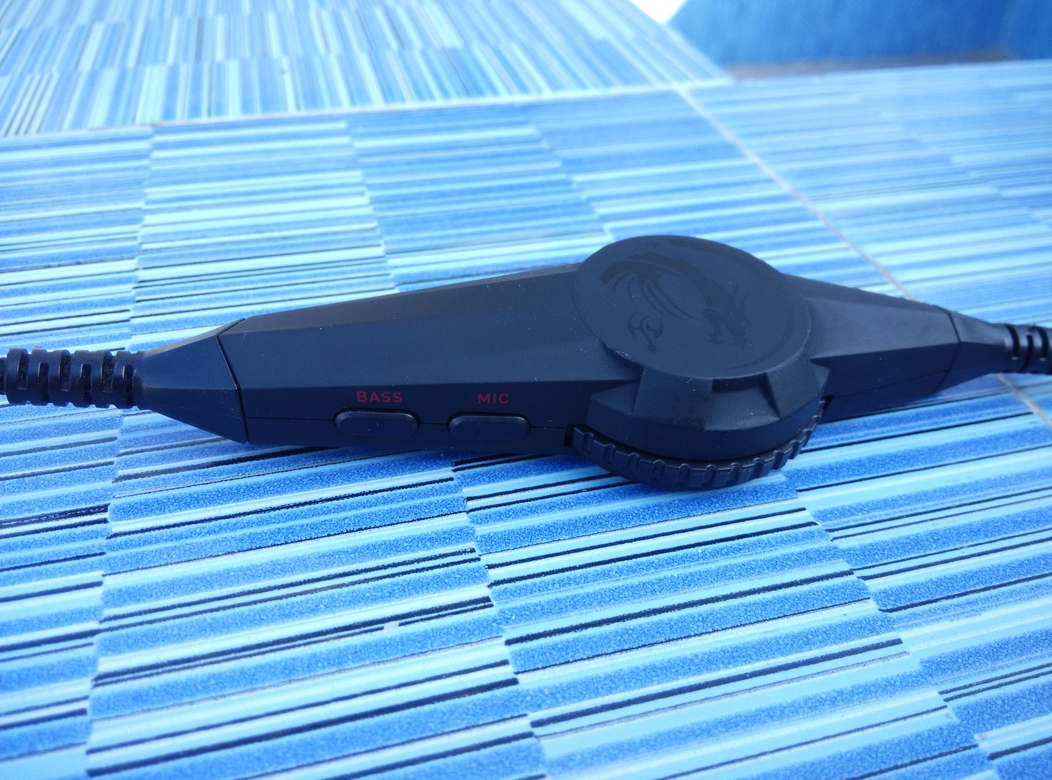 Coming on to the inline remote which also houses the sound processor for the headset, it too like the rest of the headset is built pretty solidly and has an inline volume control, a vibration on/off button along with a mic on/off button. A good addition but not without cons, the inline remote is a little bulky, i think a different design which would make it lighter enabling it to be used with a clip would do better here.

To sum it all up, while the looks can be subjective, when it comes to comfort and build quality, the MSI DS502 scores well.

Let’s talk about the Software Utility before jumping to the exciting part(Sound Quality 😉 ).

MSI DS502 Gaming Headset comes feature loaded on the software side of things, while most of them are self-explanatory, some might need a little explanation. 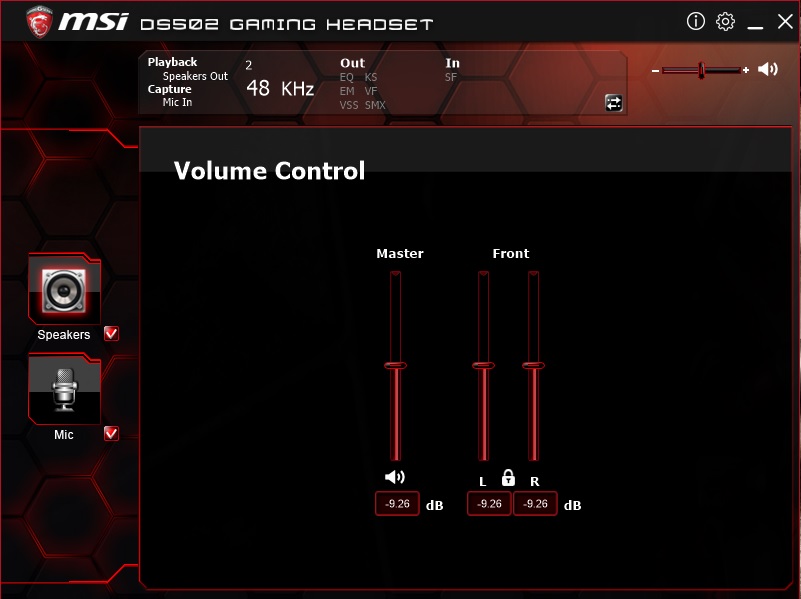 You will be greeted by the above screen after opening the bundled utility, and as you can see pretty self-explanatory stuff.
Here you can change the individual or master volume of the headset. 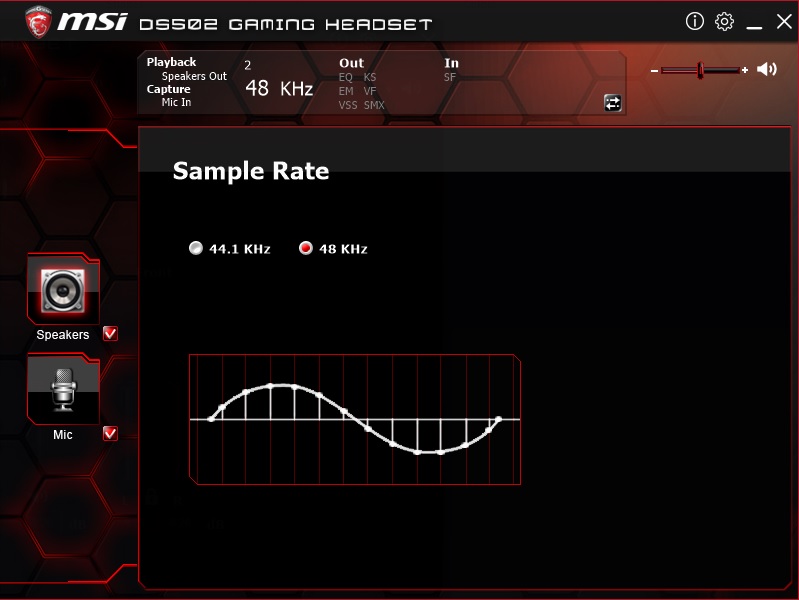 This page simply lets you change the sample rate of the audio processing, although it pretty much does nothing to the sound quality audibly at least, so better leave it at default. 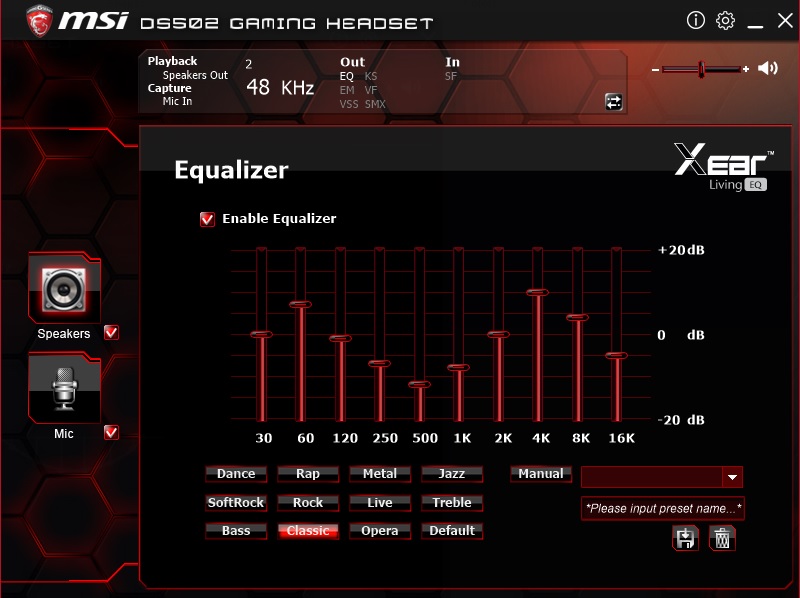 For those of us who like tinkering with the EQ to truly make our headset suit our needs, this is the place to do it, there are several presets to choose from and a 10 band equalizer at our disposal. 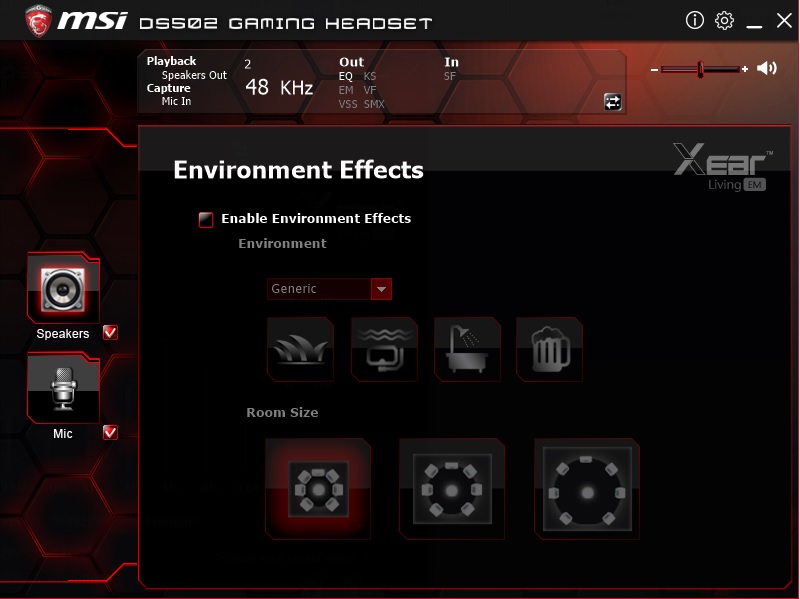 Once again, another generic Environment Effects/Room Correction screen which comes standard with practically any audio processing device for PC. 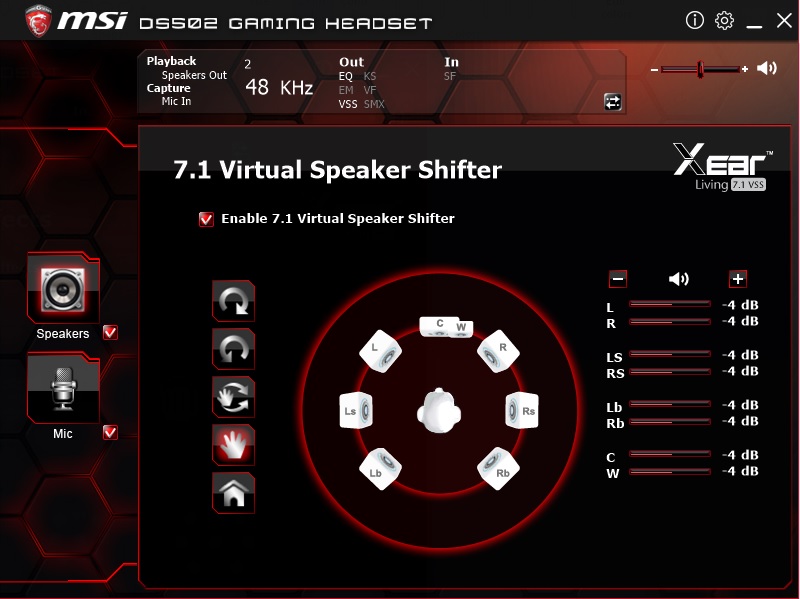 Now this is where things get interesting, the MSI DS502 gaming headset boasts of virtual 7.1 sound processing, it also gives you complete control over virtual speaker placement as well as individual sound levels for each channel. 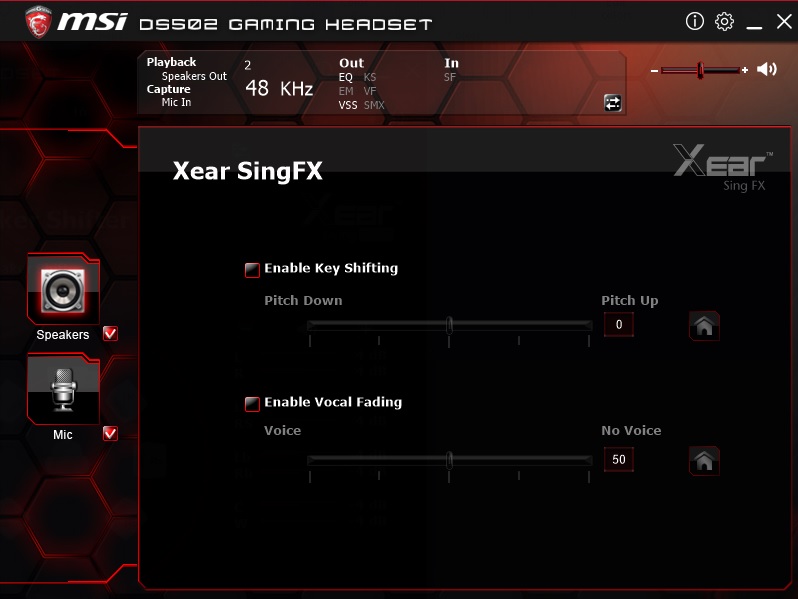 I am pretty sure 99% of us won’t be using this headset for any kind of singing, but we do have live-streamers and the like who just might have some fun with this feature. This page essentially allows the user to pitch up or down his voice, going from “Chip & Dale to “Batman” 😛 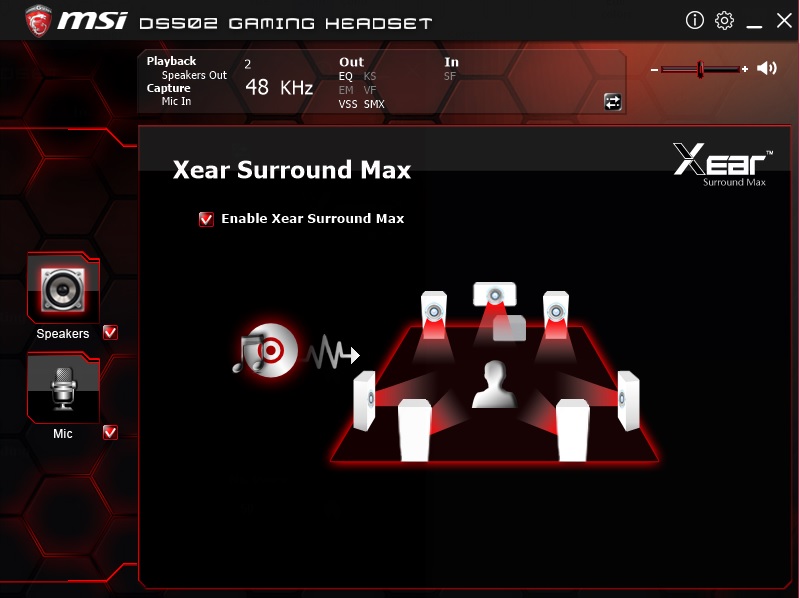 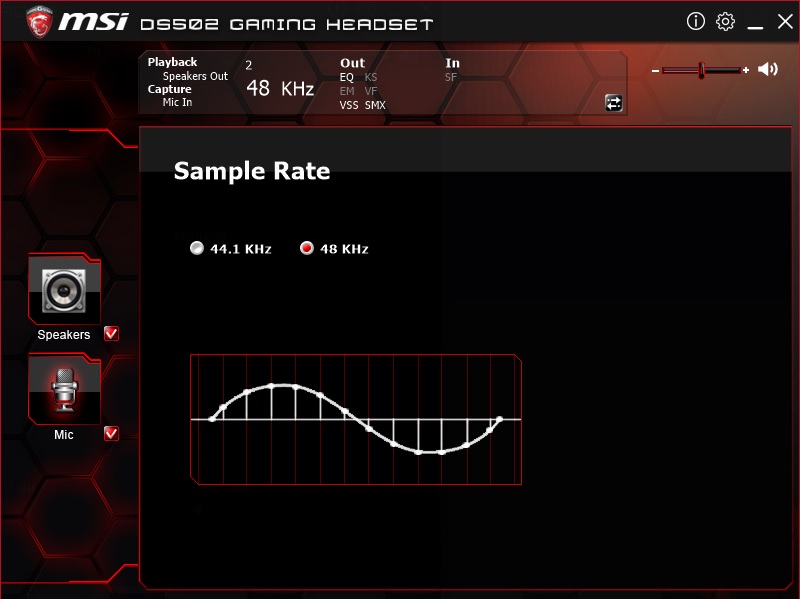 Similar in functionality to the speaker page, and just as i said before, this can be ignored for the most part. 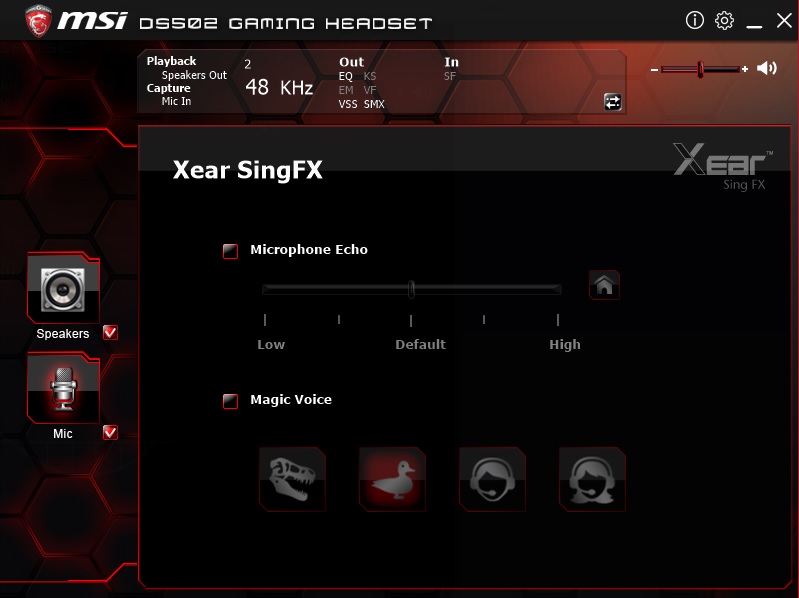 While Microphone Echo is a self-explanatory name, you might be wondering what Magic Voice is all about. It’s a voice modulation setting in simplest of terms, sadly there are only 4 presets. 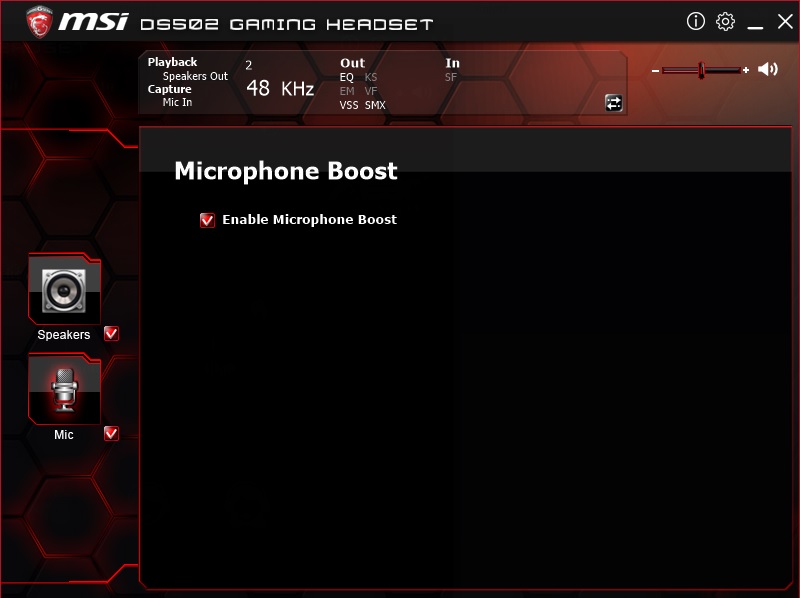 As the setting on the page says, it boosts the volume on your mic in case you are not adequately audible to your team mates.

I don’t know about you guys but when it comes to evaluating any audio device. Sound Quality despite being a subjective quantity holds the most weight for me over other features or nifty tricks the product might have up its sleeves.

Moving on let me introduce you guys to some basic terminology i will be using henceforth while trying to explain the audible characteristics of the MSI DS502 gaming headset. (gaming specific only, i am not going to deep here with the audiophile stuff so bear with me)  :

1) Soundstage : This parameter decides on how well the audio device can reproduce the difference in sounds generated from different sources in a track which are placed at different lengths from the player/singer, for example some might be nearer to the player/singer in a game or a studio respectively and some might be farther away, an audio device with a fairly large soundstage can faithfully reproduce the minute differences and will enable the listener to feel as if he is literally in the middle of the action.
In simpler terms a larger soundstage creates a 3-D effect where the listener can visualize the location of the singer and the instruments or in case of games the enemies/friendlies around him.

2) Neutral vs Colored sound : Any audio device which reproduces sound as it was produced and recorded is known as a neutral audio device, for example, most studio headphones are neutral to quite a degree while most of the “Gaming Headsets”( for eg MSI DS502) and Consumer grade headphones are colored, meaning some specific frequencies are bumped up or lowered down to change the sound quality, while sometimes it is a good thing depending on the type of music, on most occasions it hurts the audio.

In short while being colored isn’t always bad, being neutral is always a better bet.

4) Open back vs Closed back : Headsets/Headphones are primarily differentiated based on whether the ear cups leak sound(open back) or if they isolate sound(closed back), by design an open back headphone will have a wider soundstage while having shallower bass, conversely a closed back would have a better/deeper bass response but a narrow soundstage.

Now that these terms are out of the way, let’s commence the evaluation 🙂

Considering how this was MSI’s first foray into the world of audio, my expectations were well in check.

But their track record with their other product lines was pretty good, so i was hopeful. I took the headset for a long ride, tested it with different games like Battlefield, Tribes, Dota 2 as well as some single player games like The Witcher 3 and The Fallout 4.

Also watched a couple of TV Shows/Movies on it, and i came to a conclusion that this headset is average at best, now before you think i am being too harsh here, let me do some explaining.

The headset has decent treble, i will give it that, the treble has good extension and detail and is non-fatiguing ie. the headset isn’t too bright, meaning you can keep listening to this headset for long duration without feeling tired which is a good thing considering gaming sessions can last quite a while.

The mids were lifeless, they were plasticky and very artificial sounding, there wasn’t a single song in which i could enjoy the vocals, even though it is technically a gaming headset, i was expecting decent vocals, one major issue i observed with the MSI DS502 gaming headset is that the sound was hollow, that i think is the right term here, it felt like the sound was coming to me through a narrow pipe, this won’t be apparent immediately but try listening to another headset/headphone side by side and it becomes pretty clear what i am trying to say. I think over coloration is to blame here, as even with a lot of EQ tweaking i could not get satisfactory results.

The soundstage on the MSI DS502 gaming headset is actually good, it’s not super wide but it’s good enough for a closed back gaming headset, in games it’s not too difficult to judge the positioning of friendlies and enemies. This coupled with the Virtual 7.1 surround does make for a good experience.
Although i would like to state that the virtual 7.1 seemed a little dodgy to me, while in some cases it was working fine, in others i was not able to differentiate between surround right and rear right speakers. Same goes for the left side speakers too, not sure if it’s a software glitch or implementation issue.

Coming on to the bass, the bass on this headset has some depth but no definition, it’s very flat and boomy at times. The explosions sound muddy, there is barely any punch, the smart vibration is a neat trick MSI DS502 comes bundled with and surprisingly it does help in making you “feel” the bass but sadly it cannot make up enough for the bass to be enjoyable. The overall tonality of the sound on this gaming headset is towards the warmer side.

When it’s all said and done, i wouldn’t recommend this headset to a friend or a fellow gamer alike.
Even at its low retail pricing there are things which cannot be overlooked, and there are competing products out there doing better at a similar price range.

On a closing note, i do hope MSI will come out with a revision or bring out an improved iteration of this product, the MSI DS502 gaming headset might be an average product overall but it did a few things right, the smart vibration, good soundstage, 7.1 surround and a low price tag to boot.

MSI still has a long way to go if it wants to compete in this field with the already established brands and therefore we are unable to give this product a recommendation.