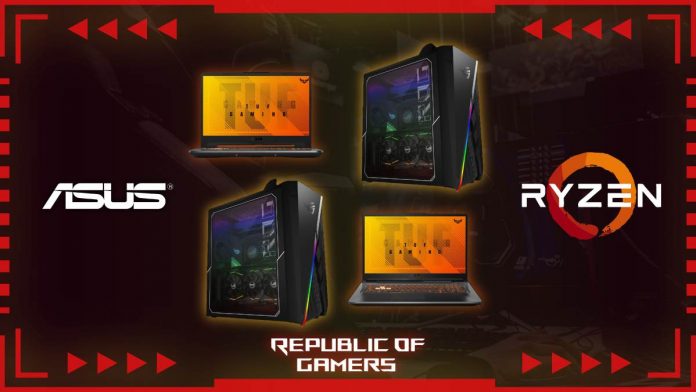 New Delhi, June 2nd, 2020: Underlining its vision to deliver the ultimate gaming experience, tech giant  ASUS has launched an all-new range of TUF gaming laptops and ROG desktops for Indian users. The brand has rolled out two models: A15 and A17, under the TUF series, featuring the new 7 nanometer AMD Ryzen™ 4000 Series Mobile Processors. A15 has a Bonfire Black (FA506) and a Fortress Gray (FA566) version, whereas A17 (FA706) will be available in Fortress Gray version. ROG desktops, on the other hand, include two models: GA15 and GA35, powered by AMD Ryzen™9 3950X Desktop Processor

Commenting on the launch, Arnold Su, Business Head, Consumer & Gaming PC, System Business Group, Asus India said, “We are excited to enhance our partnership with AMD and take it a notch higher with such groundbreaking products from the TUF and ROG segment. These strategic partnerships will bring more people to experience PC gaming and advance the industry. The TUF series design augments the experience of gaming thus making it more accessible to consumers who are looking for high performance at a cost they can appreciate. Besides, these devices are also designed to fulfill the demand from content creators for heavy edits to be done by video editors and 3D artists. Our commitment to thoughtful design and truly immersive creative and gaming experiences on the laptops and desktops continues with this new series. We’ve invested in redesigning our portfolio illustrating our ongoing dedication to deliver quality devices every user is proud to carry.”

Vinay Sinha, Managing Director, Sales, AMD India Pvt Ltd said, “ASUS TUF A15 and A17 are India’s first Ryzen™ 4000 series mobile powered gaming laptops, addressing the aspirations of gamers and multitaskers who want to push their limits. Gaming is an important focus for ASUS and AMD, and we are pleased to strengthen our association further with the new TUF and ROG series. He added, “AMD is here to offer dependable performance choices to gamers for responsive and uninterrupted gaming experiences, with our industry leading Zen2 core architecture and 7nm desktop and mobile products.”

FIREPOWER FOR ANY TASK :

Armed with the strength to tackle any situation, the TUF Gaming A15 and A17 deliver dependable performance for gaming, streaming, and everything in between. Up to a nimble 8-core AMD Ryzen™ 4000 Series Mobile Processor can activate as many as 16 threads to power through serious multitasking. Paired up with a GeForce® GTX 1660 Ti(A17) or GeForce® RTX 2060 (A15 only) discrete GPU, both laptops can pump out reliably high frame rates in a wide range of popular games.

Demanding games and apps load faster on the nimble NVM Express® (NVMe®) SSD. With up to 1TB of storage, this superfast PCIe® drive offers plenty of space for massive game files, multimedia projects, and media. Speedier load times across your program library means less time spent waiting and more quality time for work and play. Backing up the faster PCIe SSD, the TUF range also features a standard 2.5” HDD slot, offering up to 1TB HDD in some models.

*On models with NVIDIA GeForce® GTX 1660Ti and above there is an additional M.2 SSD slot which lets you easily upgrade your storage to carry more games and apps everywhere you go.

With support for up to 32GB of dual-channel DDR4-3200 memory, the A15 and A17 can handle everything from serious multitasking to multimedia rendering with speed. The high-speed RAM has the bandwidth to let you study, stream, and browse the web smoothly and simultaneously with greater overall performance than previous generations.

Two sleek looks give gamers greater freedom to show off their personal style. Choose between a stealthy and sleek Fortress Gray chassis or an eye-catching Bonfire Black design accented with a crimson stripe. The subtle honeycomb patterning around the base adds grip and echoes hexagon reinforcements around the chassis, while hairline brushstrokes across the palm rest keep it sleek and clean.

Two anti-dust tunnels located at the edges of the fans catch incoming dust and dirt particles and channel them back out of the chassis. These measures improve overall system stability by preventing build-up that can compromise the performance of internal cooling components. Self-leaning cooling ensures long-term system reliability that truly lives up to the TUF name.

The ROG Strix GA15 offers smooth, precise graphics which are crucial in esports, where reaction times make or break plays. Powered with up to a potent AMD® Ryzen™ 7 3700X 8-core CPU, this gives you enough power to handle creative work like streaming and video editing. The NVIDIA® GeForce GTX 1660Ti™ pumps out reliably high frame rates for fast and fluid gaming. Upgradable with up to 32GB DDR4-3200MHz memory, you can easily game, stream, browse, and chat all at the same time.

Jump into multiplayer, live stream games, and keep up with team chat simultaneously without slowing down your system. Up to 32GB of DDR4-3200MHz memory ensures a smooth multitasking experience, no matter how many browser tabs or apps you have open.

Upgradable up to a 1TB NVMe SSD and 2TB HDD (upgradable) offer ample storage for a complete collection of modern games and apps. Dual-drive configurations can make full use of AMD-exclusive StoreMI Technology* that moves your most frequently accessed data to the SSD, melding the responsiveness of SSDs with the massive capacity of mechanical drives. The result is faster load times and for more games and apps.

Hook up your favorite devices and get in-game fast. The GA15 offers fast charging and data transfer via one reversible Type-C™ (USB-C™) port with peak interface bandwidth of 10Gbps via USB 3.2 Gen 2, plus five Type-A USB 3.2 Gen 2 ports that give you plenty of space for all of your favorite peripherals. For gaming or streaming 4K video on the big screen, hook up via the HDMI 2.0b port and enjoy Ultra HD at up to 60Hz, or use the DisplayPort 1.4 outputs to drive a high-refresh G-Sync gaming monitor. Wi-Fi 5 offers speed and convenience for everyday use, while the Gigabit LAN enables low latency connections for online gaming.

BREATH FROM EVERY SIDE :

Comprehensive cooling enables higher sustained clock speeds for superior performance while gaming and multitasking. Widened vents on all sides of the chassis direct airflow through a multi-zone design that separates the CPU and graphics card from the PSU and storage to minimize thermal interference and lower ambient temperatures. Better breathing means you can maintain high FPS through marathon gaming sessions. In performance mode, max fan noise is limited to under 40dB, while in turbo mode, noise is limited to just under 45dB.

Dominate game worlds and beyond with the ROG Strix GA35. Packed with an AMD® Ryzen™ R9-3950X CPU with 16 cores and 32 threads, you can accelerate demanding workloads like content creation and heavy multitasking effortlessly. The cutting-edge 7nm fabrication technology helps the AMD® Ryzen™ 9 3950X CPU boast double the cores of the previous generation. Bolstered by a serious liquid cooling system, the unlocked CPU can be overclocked for even speedier performance.

The GeForce RTX 2080 Ti’s graphics prowess is elevated with a huge 2.7-slot heatsink capped by three Axial-tech fans that help the card maintain high clocks in the heat of battle. In internal tests, the Strix GA35 pushed Overwatch up to 188 FPS at 4K with Epic details, while Shadow of the Tomb Raider rendered at a smooth 73 FPS in rich 4K Ultra detail.

Robust component cooling and an airflow-optimizing chassis gives the GA35’s high-end processors more thermal headroom for peak performance. Three internal chambers keep the CPU, graphics card, and power supply separate to minimize thermal interference. You can harness greater power from your CPU with liquid cooling. Coolant channels heat off the processor and through a 240mm radiator that has two 120mm fans to quickly dissipate it from the system.

The motherboard’s dual M.2 SSD slots feature heatsinks that can improve sustained throughput and long-term reliability and have their own cooling system. For even more strenuous storage loads, the Strix X570-F Gaming motherboard has a header for an M.2 fan that enables direct airflow through active cooling.

With upgrade support of up to 128GB of dual-channel DDR4-3200 memory, the GA35 a master multitasker. With this much RAM, you can work on huge multimedia projects, encode videos, and browse as many tabs as you want without sacrificing speed.

Upgradable up to a latest-gen PCI Express® 4.0 SSD with as much as 1TB of superfast storage offers massive space for all your projects, games, and media. Read speeds are up to 1.4x faster and write speeds up to 1.8x faster than PCIe® 3.0 drives. Apps and programs load with lightning speed, letting you get to work or get in-game faster than ever.

The Strix GA35 is the first ROG system to feature new Keystone II technology. Introduced with the ROG Strix III and Hero III gaming laptops introduced in Spring 2019, the Keystone is an NFC-enabled key that can be docked in compatible devices to quickly access customized settings linked to your ROG ID. Keystone II can be configured to switch the system to a specific operating mode, launch an individual game or application, or unlock a hidden Shadow Drive for private files.