Monster Hunter: World is the latest game in the franchise, where you hunt monsters across various landscapes and gather materials to upgrade your gear so you can hunt even bigger monsters.

Monster Hunter: World brings new features and monsters to the table and revamps the existing core gameplay into something that is more accessible for newcomers and still offers a deep and challenging experience for series veterans.

Note: Review has been updated for thePC port which we got our hands on in January 2020. The score remains unchanged.

The character customisation is deep and has plenty of options to fine-tune and tweak your character to your heart’s content
Your Palico can aid you in combat by using various gadgets that become available for use with time.
Something new introduced in this game is the ability for your Palico to convince other smaller animals like the Jagras to become your Tailrider, which is a temporary follower that can assist you on your hunt.

Combat in this game can be unforgiving. You have to take into account stamina, the time to execute attacks, and decide when to roll away for a tactical potion or lure the monster into a trap you set up. All 14 types of weapons have a different feel and style to them, and have a vast upgrade tree.

The added verticality on top of the already deep combat allows you to mount monsters and chase them up (or down) a variety of terrain.
All of this might seem daunting but Capcom has introduced proper tutorials to ease the learning curve for beginners, thus making this the most accessible entry into the series.

Astera, which is the town and base of operations for your character contains all the functionalities a hunter might need. You can craft new gear from the forge or buy them off a vendor, stock up on provisions, grow herbs or head to the canteen for a snack to boost your stats before heading out for a hunt.

Your room which can also be accessed from Astera gives you access to the training area where you can try out gear. You can also keep small animals as pets inside your house which adds further personal touch to the game.

The New World’s diverse locale is home to a wide variety of exotic flora and fauna that, that brings the game to life.
Carnivores will hunt Herbivores, Herbivores will defend their herds when threatened and bigger Monster pretty much chomp everyone else up.
This dynamic ecosystem adds to the overall immersion and makes me feel like I am part of a living world that breathes and functions by itself.

Expeditions allow you to explore an area without any time restrictions or penalty take advantage of the open world nature of Monster Hunter: World. Without a timer breathing on their backs, players can truly experience and appreciate the beautiful world that Capcom has designed. 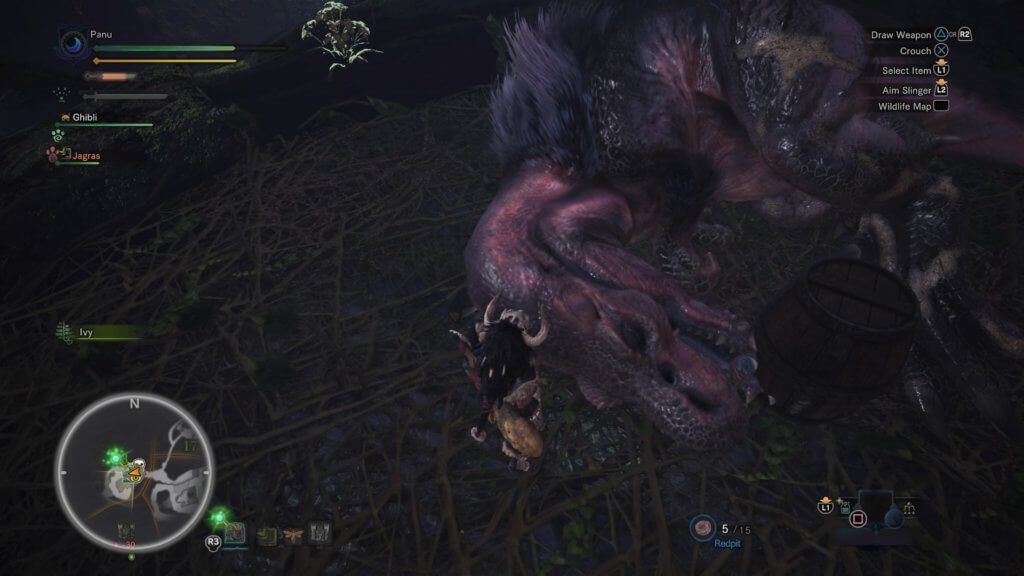 Monster that you have beat in the main story hunts will also appear and you can harvest specific resources that you might need in order to craft a certain armour or weapon.

The only gripe I had with this game was the clunky UI. This is especially an issue when scouring the map for certain resources, but it is something you grow accustomed to.

Multiplayer plays a big role in this series and this game is no exception. You can host public sessions or invite your friends for some co-op hunting.

The Celestial Pursuit serves as the game’s gathering hub where up to 16 players can get together and do some cool mini games such as arm wrestling. This is also where you can access the Arena which pits you against monsters with a fixed equipment set and rewards you based on your slaying time.

The story is nothing to write home about. It does its job of introducing players to gameplay elements and new locales.

There are a few scenarios that break the mould like the fight that requires you to weaken Zorah Magdaros before climbing on top of him and destroying his cores. But such variety is rare and the story quests are mostly a series of hunts with increasing difficulty with the ocassional fetch quests thrown in.

The characters while well designed, are easily forgettable.  The handful few exception to this are your cheerful handler and the feline chef, but it was mostly because of their quirky dialogue and not because of actual depth in the character.

With all that being said, the narrative has definitely improved from the previous games. But if a deep story with complex characters is what you are looking for, then you will be sorely disappointed.

But Monster Hunter was never about the story, it was about killing monsters and that’s something Monster Hunter: World excels at and therefore I will not penalise the game a lot for failing to deliver in this aspect.

Visually this game is a treat. This game takes full advantage of the current generation of consoles. Sharp textures, gorgeous lighting, lush forests, destructible environments are all present in this game. The monsters models are also well done and have breakable body parts.

I will let these screenshots do the rest of the talking. 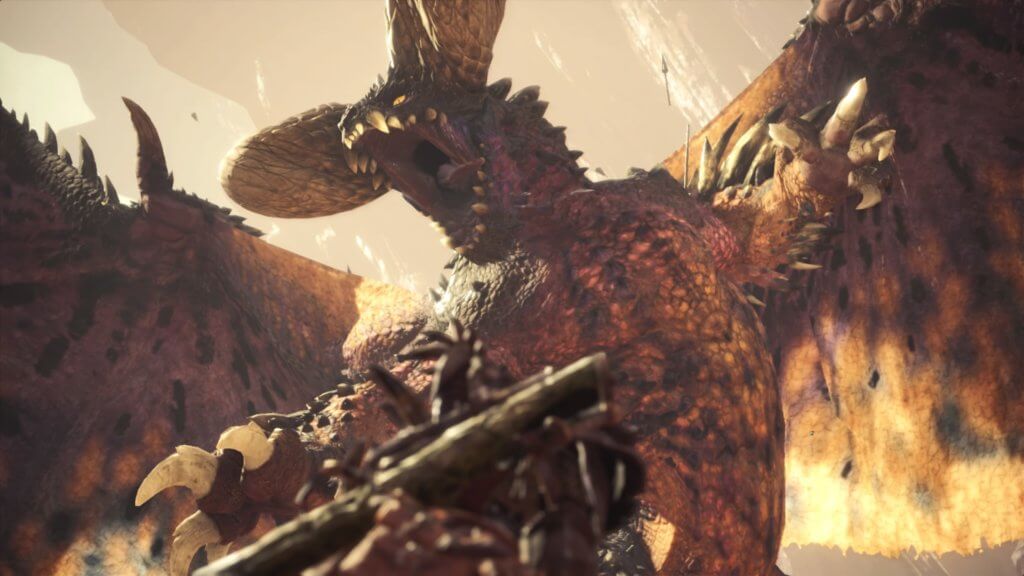 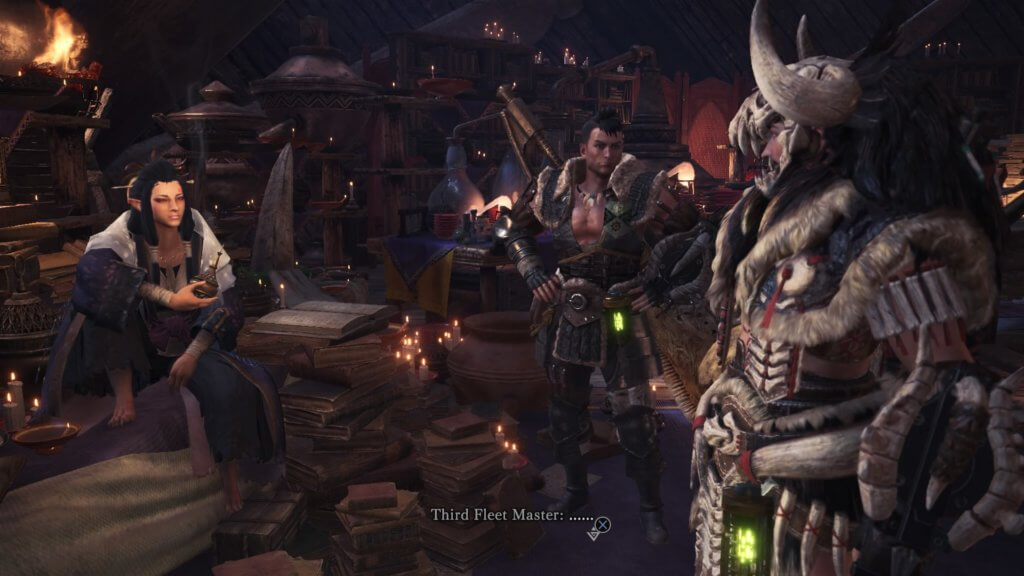 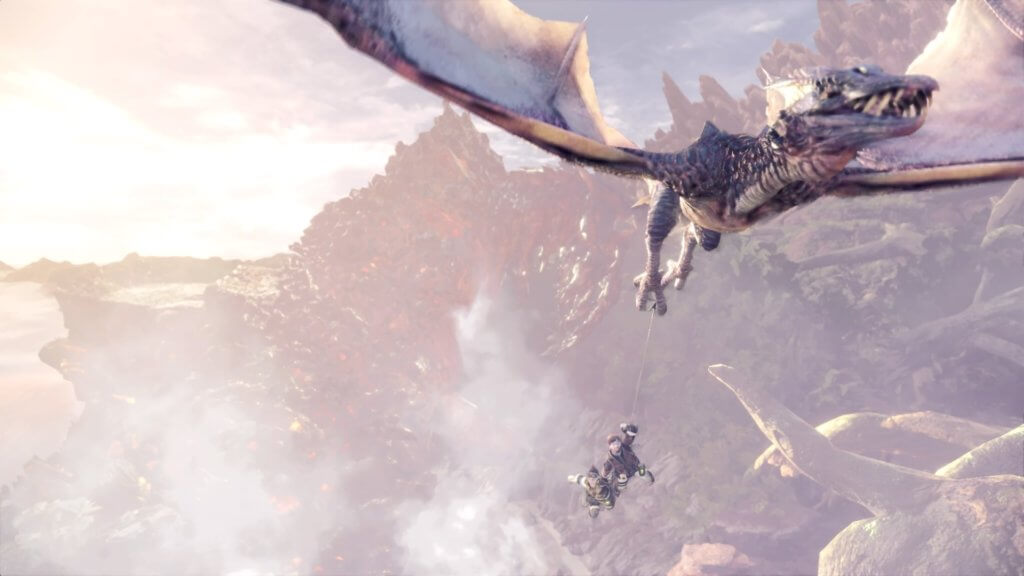 On the audio side, this game delivers yet again. Monsters growl, whimper and call out to each other when in a pack.

The game is well optimized, and I have not faced any significant drops. For PS4 Pro users there’s an option to favour frame-rate or resolution. You can also enable HDR if you have a TV or monitor that supports it.

Much like the variety of monsters and weapons that Monster Hunter World boasts of, there’s no shortage of customizing your settings on PC. Almost every aspect of the game is tweakable.

The game runs smooth, I got around 90 FPS on my system with Ryzen 2600x, 1070 and 16 GB of RAM. The keyboard bindings are a bit hard to get adjusted to, but they are remappable. I still prefer my controller though.

Now in terms of visuals, there’s a bit of a problem. I ran into some really poor quality of textures in places, even with the high definition textures installed. Which is disappointing, but not a deal-breaker for me. But it’s still an issue.

The game is mostly well optimized, and I managed to get it running on an old 970 4GB card where it got 40 FPS average with everything maxed out except textures. The Iceborne update has put some pressure on the CPU side, however, with some users reporting very high processor usage. I did not run into any issues on my system.

Monster Hunter World is a fantastic game that does a great job of introducing new hunters to the exciting world of Monster Hunter while giving series veterans a lot of new meat to sink their teeth into. From the fascinating monster designs to the gorgeous locales, Monster Hunter World blends gorgeous visuals with the signature adrenaline-pumping gameplay. There’s a ton of variety to the monsters and your arsenal, and there’s a gameplay style for every kind of Hunter out there.