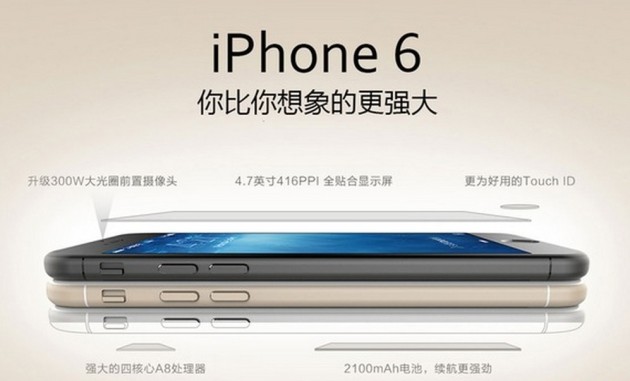 Apple still hasn’t announced the iPhone 6, but in China you can already pre-order the rumored smartphone from some carriers. Earlier this week China Mobile starting taking reservations, quickly racking up 33,000 pre-orders according to one report. Now China Telecom is getting in on the action with a pre-order webpage of its own that claims to reveal some key specs and features for the iPhone 6.

According to China Telecom the iPhone 6 will sport a 1704 x 960-pixel display, an improved Touch ID sensor, a 2100mAh battery and an A8 processor. Is any of that true? It’s still too soon to know, though the ad does appear to be based on somewhat outdated claims. MacRumors notes that recent reports suggest the iPhone 6 could actually offer a 1334 x 750-pixel display at 326ppi and an 1800mAh battery. Improved Touch ID and an upgraded A8 both seem pretty likely, but we won’t know for sure until Apple makes an official announcement on September 9.

The ads also offer up names for the two new iPhones, which are expected to come in at 4.7 and 5.5-inches. According to China Telecom the smaller device will be called the iPhone 6 Air, while the larger one is the iPhone 6 Pro. Those are both names we’ve heard tossed around before, though again it seems like the Chinese carrier is simply going off various rumors.

Either way there’s clearly tons of interest in the iPhone 6 over in China, where Apple is expected to make a big push this year with two larger iPhones. We’re also pretty excited to see what the company has to show us next week at its California event. Rumor has it Apple could really go above and beyond this year, revealing the iPad Air 2 and the alleged iWatcht alongside the iPhone 6 all at once. 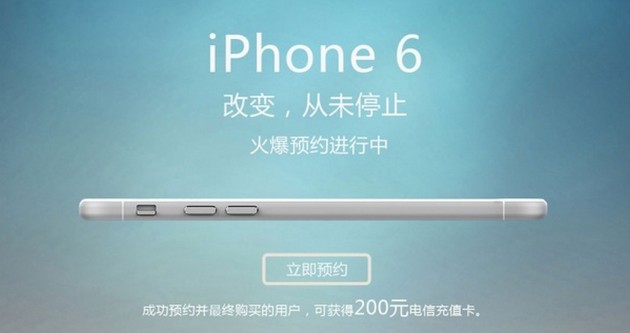