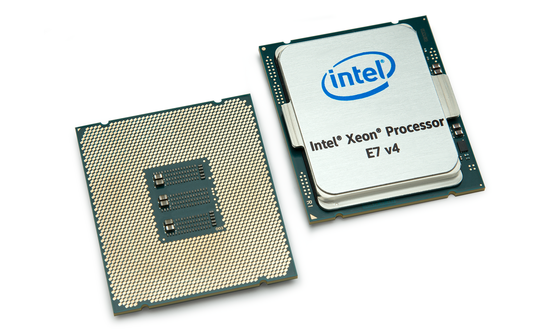 Intel has finally launched its 14nm based Xeon Broadwell-EX platform that will succeed the 22nm based Haswell-EX platform.The 8890 v4 boasts 24 Cores (and 48 threads) on a single R1 socket and will feature turbo frequency of as high as 3.4 Ghz. . The platform maxes out 3 DIMMs per channel on 8 channels for a total of 24 DIMMs or 3 TB/socket capacity. 3rd Party node controllers will be supported on Brickland (E7 v4) to support even larger custom setups. 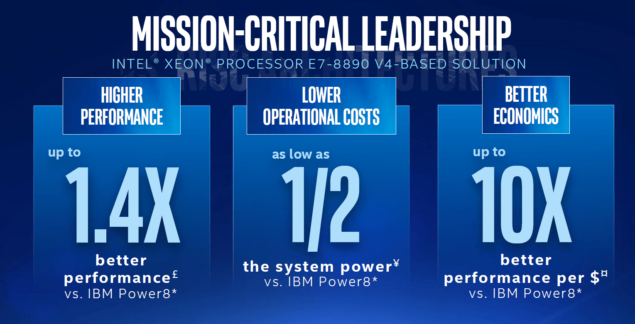 Intel is claiming 1.4x better performance than an equivalent IBM Power8 system at ½ the TDP. Not only that but its offering 10x better performance per dollar – which is the go-to metric (apart from performance per watt) for HPC systems. Brickland supports seamless integration of up to 8 Socket designs for a grand total of 192 cores / 384 threads and 24 TB of DDR4 Memory support. 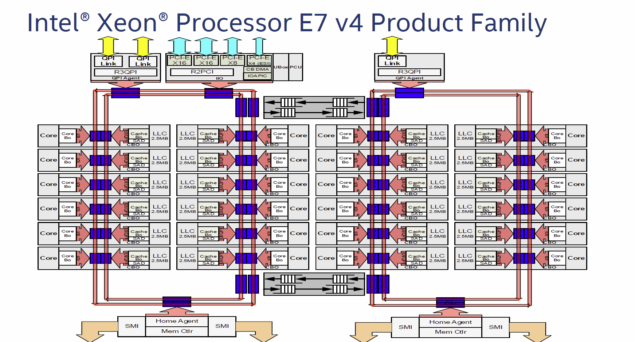 Owners of the E7 v3 series of processors will be able to use the same systems to run the new lineup of CPUs after a simple BIOS update. Intel recently launched its 3D XPoint memory and this will be supported on the new platform through use of NVDIMMs. It can be used as bit-addressable non-volatile memory which features 10x the density of DRAM albeit at a slower pace than that of conventional RAM.The block diagram also shows that Intel has added a third QPI link that will reduce the number of hops required for the CPUs in a multi-socket configuration to talk directly with each other. 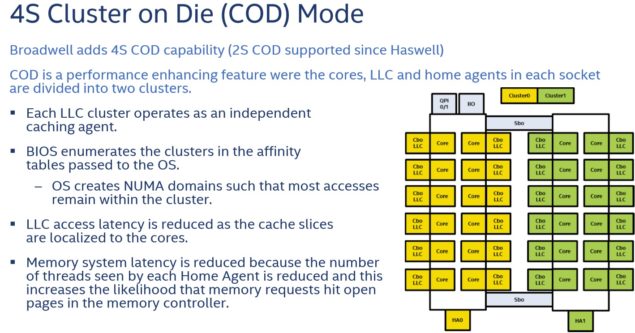 The flagship processor will feature 60MB cache (up from 45 MB max for Haswell-EX) and three QPI channels (9.6 GT/s Max). PCIe 3.0 will be supported as well as the usual plethora of Memory RAS such as ECC and Scrubbing features. One major difference between Haswell-EX and Broadwell-EX is the fact that 4S COD Mode (Cluster-on-Die) is finally supported.2S COD Mode was already present in Haswell-EX but with Broadwell-EX, 4S COD is finally supported. RAS capabilities have also achieved OS/ISC integration starting from Broadwell-EX.

A full specifications table is given below for comparison: 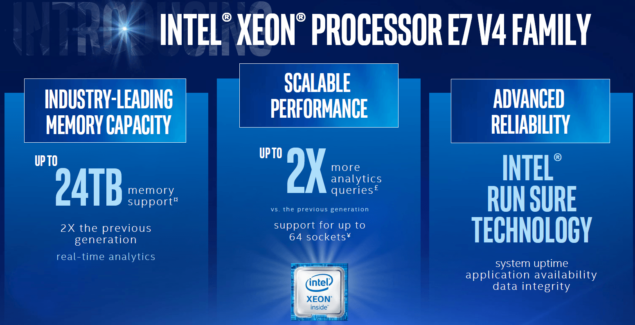 Skylake EX Purley will actually ship with 6 Channels of DDR4 as opposed to 4. It will also include the AVX 512 instruction set and will boast the 100G OmniPath interconnect. Skylake Purley will also have Cannonlake graphics support not to mention FPGA integration (another important upgrade). The FPGA will be able to execute programmable logic as opposed to the Skylake processor. 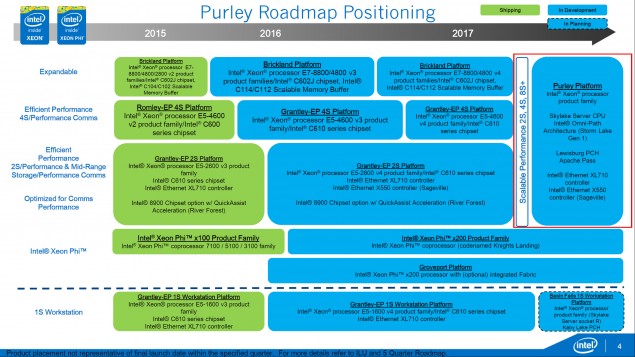 One of the biggest advancements that Skylake will have is the Intel Omnipath Architecture integration which will be called Storm Lake (Generation 1). The PCH will be codenamed Lewisburg while as it will also ship with updated Ethernet controllers.

Another very important point to note is that the platform will be scalable up to 8 Sockets – which is frankly an absolutely insane amount for CPUs working in tandem in any given configuration. Specific SKUs have not been disclosed at this time. Skylake EX Purley will be spread out amongst the entire scalable segment – unlike the previous iterations.

The TDP will be configurable from 45W to 165W and will require Socket P. Another interesting point to note is the fact that not only will Purley update the number of PCIe slots to 48 but they will finally be configurable in x4, x8 and x16 divisions.

The new processor family offers headroom for growth with traditional four- and eight-socket support, is designed for configurations up to 256 sockets via third-party node controllers, and is used in OEM system designs that currently feature up to 64 sockets. It also offers industry-leading memory capacity of up to 24TB in an eight-socket system, allowing massive datasets to be stored completely in memory, rather than on hard drives, to accelerate time to insight and decision-making.

The new processors include more than 70 reliability, availability and serviceability (RAS) features, including Intel® Run Sure Technology that is unique to the Intel Xeon processor E7 family. These RAS features offer advanced data integrity and mission-critical system readiness that reduces the frequency and cost of server downtime. In addition, improved error recovery mechanisms and features such as memory mirroring offer exceptional data reliability without driving up system-wide memory requirements.

New security features built into the processors protect the most mission-critical, data-rich applications by encrypting data much faster, improving detection of sophisticated threats and increasing protection against malicious attacks. The hardware-enhanced security capabilities in the processors provide up to 70 percent more encryption performance per core4 meaning that organizations can better protect a growing amount of data with minimal impact to their system’s performance, while delivering improved malware safeguards. In addition, the Intel® OS Guard now includes Supervisor Mode Access Protection to enable privileged access implementations that offer IT more control over which users have access to sensitive system data and also help prevent a malicious user from extending those vulnerabilities and exploiting other systems across the data center.

Enhanced hardware-assisted virtualization allows IT to virtualize mission-critical enterprise workloads and move them into cloud-scale environments for new levels of agility and efficiency. Improvements in virtualization performance and resource management include lower latencies when entering and exiting virtual machines (VMs), fewer VM interrupts via posted interrupts, and less overhead in fault-tolerant environments with page modification logging.

The Intel Xeon processor E7 v4 family enables great IT infrastructure controls by including advanced telemetry features and orchestration technologies such as the Intel® Resource Director Technology. These features provide deeper visibility and control over shared platform resources, resulting in efficient scheduling, load balancing and workload migration across virtual machines. As a result, IT is able to improve asset utilization to deliver optimal quality of service levels across multiple applications.