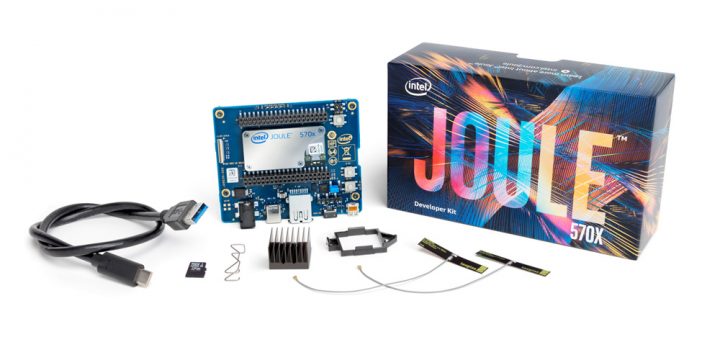 Yesterday at Intel’s annual developers conference,  CEO Brian Krzanich revealed a new maker board titled “Joule”. It boasts of Bluetooth 4.0, USB 3.0, 4k capabilities, LPDDR4 memory, 802.11ac  WiFi and the usual UART and GPIO interfaces which are a must on these kinds of boards. Intel also says that the Joule boards will run a “custom IoT-oriented Linux-based OS” and an IoT version of Windows 10.

The Intel Joule module enables people to take a concept into a prototype and then into production at a fraction of the time and development cost. The Intel Joule platform is a high performance system-on-module (SOM) in a tiny, low-power package thus making it ideal for computer vision, robotics, drones, industrial IoT, VR, AR, micro-servers and other applications that require high-end edge computing.

One of the main USPs of the Joule platform is that it supports Intel’s very own 3D RealSense cameras, widely used in drones, AR/VR setups and also sees various types of other uses in the field of robotics.

Intel’s Joule seems to pack a lot of promise, and is certainly better than its predecessors like the 2nd Generation Galileo or Edison boards, which haven’t seen upgrades for a long time now.

The biggest challenge for Intel would be to reach out to the doorsteps of the target audience. Currently, it doesn’t seem to have much competition. It certainly isn’t as cheap as the top of the line Raspberry Pi and packs much more punch than the Pis. Once the Joule starts getting the developer support that it deserves, it is bound to be a hit with the DIY market, given its potential.

Intel has unveiled two variants of the Joule as of now.