Inno3D is bringing GeForce – GT 710 and GT 710 LP, designed for high performance  on HD and ultra-resolution 4K Displays, allowing up to 10x better performance than integrated graphics in all your PC multimedia applications. 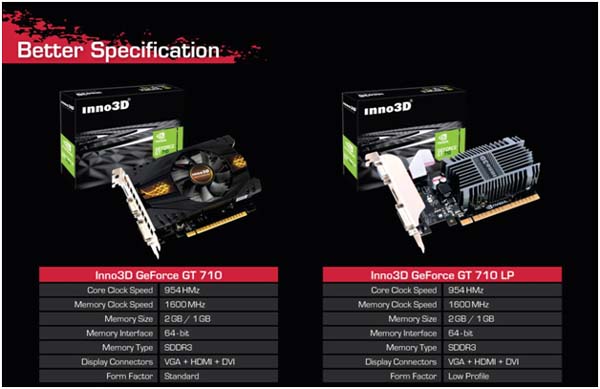 This new mid range card is targeted at people who want a cheap alternative to integrated graphics allowing better photo and video editing plus some light gaming. and can power upto three HD displays with a single card, thanks to its Optimus Technology is an added plus.

Based on Kepler architecture it uses the GK208 graphics core which is a revised version of the GK108 graphics core. It has a Memory Clock Speed set at 1600MHz with 64bit SDDR3 memory the GT710 is built on improved version of the prior entry level GPU of Inno3D family. With all the specification remaining the same between the GT 710 and the GT 710 LP, the major difference lies in the form factor being Standard and Low Profile respectively.

The budget card has HDMI, Dual Link DVI-D and VGA ports for connectivity. Pricing as of yet has not been disclosed.