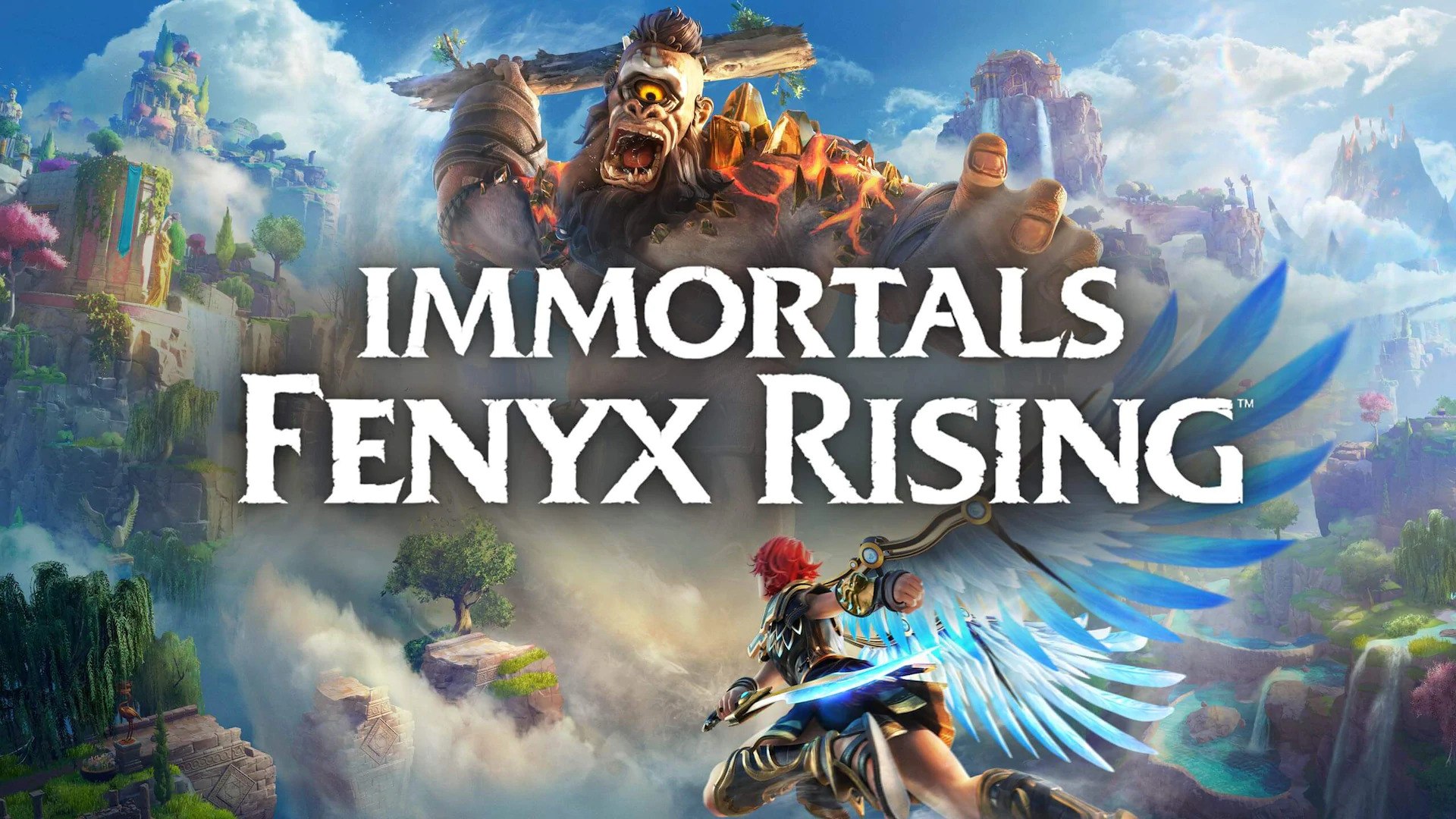 After a brief cutscene introduces us to Typhon taking over Olympus and Zeus meeting with Prometheus to save the gods, the journey begins with Prometheus narrating the rise of a new hero.

Immortals Fenyx Rising tells the story of Fenyx, a mortal who was shipwrecked on the Golden Isle. You can decide how Fenyx looks from a basic character editor that lets you pick Fenyx’s gender, face, hair, and other facial features, all the while Zeus makes comparisons to how your hair looks like a hot dog or your eyes have the color of a peanut.

The gameplay is a somewhat successful mix between the Assassin’s Creed formula and influences from adventure games like The Legend of Zelda: Breath of the Wild. The similarities and inspirations are undeniably there – its creators have themselves publicly acknowledged it – but the game goes an extra step to infuse its own elements into the gameplay.

It’s a typical hero story where the hero grows from nothing to a combat machine with the blessings of the gods. There’s a few plot twists here and there, but nothing too dramatic. Regardless of the age-old narrative, the story is filled with epic moments with a great sense of humor thanks to the ever-present commentary of Zeus and Prometheus.

Despite the light-hearted narrative, there are quite a bit of greek mythological stories told throughout the story, as well as side contents. From the tragedy of Daedalus to the stories of Ulysses, Achilles, and Hercules, the birth of Aphrodite, Pandora’s box, and much more.

Before facing the titan, Fenyx needs the divine powers of 4 gods: Aphrodite, Ares, Hephaestus, and Athena, each of whom has their own section of the Island. The mission structure is completely linear, and it’s up to you to decide which mission you want to tackle first.

Fenyx as a character lacks the charisma that someone like Zeus or Prometheus exhibits, and that’s a bit of a problem considering that Fenyx is the protagonist of the story. I felt that even after the character development throughout the 15-20 hour story, Fenyx still felt lackluster compared to some of the other cast.

Like any typical Ubisoft open-world game, there are a lot of activities to do. Thankfully, however, none of the side activities are mundane as some of the previous Ubisoft games, although some can be a bit of a chore. From Tartaros vaults to navigation challenges, to interactive Fresco puzzles, the map is dotted with things to do. Fenyx is also able to tame certain creatures to ride them as mounts, and ingredients may also be collected from the world in order to craft potions.

One of the things I love about Immortals Fenyx Rising is that none of the content is gated in any way. After a brief tutorial that introduces you to the game’s basic systems, you are free to do whatever you wish and in any order you want.

I often found myself getting lost in its forests and deserts, climbing the icy peaks of Olympus and descending to the beaches and abysses of Tartarus, because every corner had something new to see or do. I often found myself deviating from the main storyline in order to pursue the side content that the game offered.

The sandbox structure of Immortals Rising means there’s quite a bit of verticality and different navigational challenges involved. Thankfully there’s quite a bit of option when it comes to traversing the world. As I previously mentioned Fenyx can tame different mounts that have unique characteristics to ride around the world, Fenyx is also capable of climbing, swimming, and diving as much as their stamina meter allows, and also has the wings of Daedalus, which allow him to execute the double jump and glide across great distances. Along with these abilities, Fenyx is also capable of lifting and throwing various objects, which are used both in solving puzzles and in combat.

The wide array of tools available at the players’ disposal would mean nothing if they were not fun and properly implemented. And boy does Immortals Fenyx Rising deliver on this front, with a completely freeform structure for traversal as well as combat. You can stick with the basics, and not get penalized at all, or you could master the mechanics and execute extremely enjoyable sequences.

When traversing the world and undertaking quests Fenyx will come across a wide variety of mythological creatures such as cyclops, keepers, gorgons, griffins, harpies as well as hostile wildlife such as bears, lions, and wild boars. There are also corrupted heroes and legendary side bosses to defeat, which unlock a wide variety of rewards, including dope skins for your companions.

The best thing about the combat system at its core it is overwhelming simple. You can execute light sword attacks or heavy axe attacks, parries, and dodges. For range, you have access to your bow, as well as skills. But with this basic array of attacks, with some creativity, you can unleash some truly divine justice on your enemies. Take for example a confrontation with a cyclops early on in the game. You can button smash him and defeat him the boring way, or you can dodge/parry to stagger him, deliver a few blows, dodge away again, fly up and throw a giant rock to finish him up.

When an enemy is too powerful, or a direct approach might be foolish, Fenyx can approach from behind without being seen and stealth attack. You can also leverage the environment against your enemies by throwing rocks and tree trunks or bait them into falling off a cliff or make them damage each other. Each enemy has its own health and stamina bar, which if depleted can leave them stunned.

Ultimately, the freedom of this system allows each player to adapt their fighting style. It is just as effective to go “head-on” armed with potions and high-level weapons, as it is to show off with dodges, aerial combos, and alternating between attack types.

Throughout your journey, you will be acquiring materials and currencies that can be used to upgrade your gear, stats, and unlock new abilities. All this can be done in the hall of the gods, which serves as the hub world, but also offers players to do optional tasks, earning rewards and electrum, the game’s premium currency. There a hairdressing chair in which to change your appearance at any time. Potions may also be crafted from the Hall of Gods, and on the higher difficulties, they are pretty much essential.

A huge focus of Immortals Fenyx Rising is the puzzles. From the Tartarus vaults to the missions to some of the open-world collectibles, there’s a wide variety of puzzles that must be solved. If you have played Zelda or Darksiders, then these puzzles will feel right at home. It’s simple and uses a very small set of tools, but the application is wide and ingenious. There are puzzles based on physics, controlling the wind, time trials, shooting the arrows of Ulysses through obstacles, placing blocks in mosaics, or placing the correct objects on pressure plates. All these puzzles strike a perfect balance between intelligence, skill, and enjoyability. Some of the vaults required more thinking than others but the satisfaction of solving these puzzles makes it worth it.

For almost every task you do, Immortals Fenyx Rising makes sure you are appropriately rewarded. From rewarding you with Zeus’s lightning bolts for clearing a vault, to coin of Charon for completing open-world challenges. Chests also always reward you with unique loot, that might suit your particular playstyle, so it’s always worth it to go hunting the world for new things to do.

Ubisoft Quebec has taken advantage of the Anvil engine to create the world of Immortals. The art style is deceitfully simplistic at first glance but has a lot of attention to detail. Everything from the world design to the characters themselves has a cheerful cartoony look to them, but if you take some time to notice the details, you will find that Ubisoft has pushed the boundaries on what such an art style is capable of expressing.

The game itself felt smooth and the mechanics felt fluid, the controls were solid and I had no frustrating moments wrestling with the controller trying to control which direction I wanted my character to go.

At times however, the world felt empty and void of life, even the lush forests felt empty except miles of greenery stretching all around. I don’t know if this was a limitation of the consoles or the engine, but I feel that the game was lacking a bit of density when it came to the Island’s population.

The game’s voice performance is applaudable and almost all of the cast do a great job of making you laugh, delivering their humorous lines with grace. However, much like the portrayal of the characters in the narrative, the voice acting of some of the characters, including Fenyx felt a bit numb. The OST also felt a bit generic at times and lacked the oomph depending on the situation. While I appreciate that the music tried to immerse you in the world by being less subtle, I could do with more heart-pumping music during the combat.

The game run without any hiccups on the base PS4, locked at 30 FPS. I also did not encounter any significant game breaking bugs, although I did face some occasional collision issues here and there.