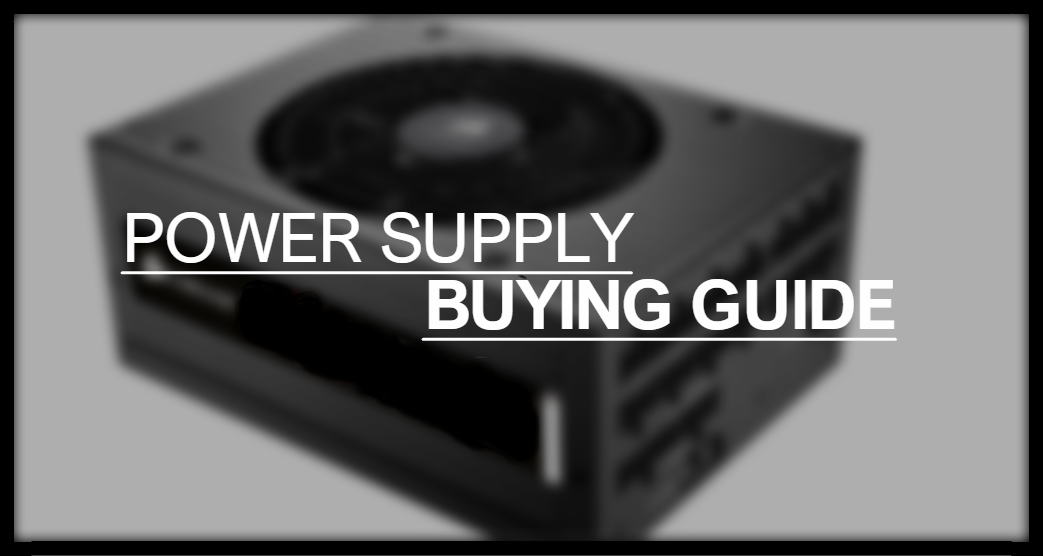 How To Pick The best PC Power Supply ?

A Power Supply Unit, simply know as a PSU, is a very important part of the whole ‘building a computer’ process. The PSU is one of the most crucial components as it is responsible for supplying all the juice your PC needs. But choosing the right PSU can sometimes make first time builders sweat due to its complexity as compared to other components. Also, PSUs are often misunderstood and overlooked and are given the least importance as compared to GPUs, Processors and other components when it comes to building a proper system.

Often, people buy a PSU with extremely high wattage and go overkill even though they only need about 20% to 30% of the power and then there are others who buy the cheapest solution possible with the requirement being on edge to edge with the actual capacity of the PSU. Both ways, the user can end up with a very bad experience. A PSU with a good build and component quality ensures safety and longevity of other components and thus it should be given priority. So then how would I know which PSU is best for my computer? We here at TechArx will help you choose your next PSU!

There is no concrete rule for buying a PSU. Selecting a PSU can be a headache considering the current condition of the PSU industry and market. Some manufacturers often display made-up quirks which are nothing but for the marketing purpose and has no effect on actual performance. Consider buying PSUs only from reputable manufacturers like Corsair, Thermaltake, Antec, Cooler Master, Seasonic etc…These brands make one of the best PSUs and have solid build quality. Also, look out for the Warranty provided by the manufacturer. You want yourself to be backed up if something goes wrong in future, don’t you? Avoid cheap and generic local-made PSUs as they are not reliable and have higher chances of failure. A single defect in a PSU can cause immediate failure of each component in the PC or random crash and restarts. Oh and don’t forget, there are cases in which a faulty PSU was the reason for a house burning down. If nothing else does, a possibly burnt house in the future should make you think twice about selecting your new PSU.

Look for a PSU with good reviews. Websites like JonnyGuru and HardOCP provide excellent review and are highly reputed.

How Many Watts Do I Need ?

The output of a PSU is measured in terms of watts. Generally, PSUs have a power output rating of from 200 watts to 1800 watts. There are two terms which capability of a PSU. Peak Wattage and Continuous Wattage. Now, in Layman’s language, a PSU rated in Continuous wattage is good. Even if the PSUs are rated in Continuous wattage and Peak wattage both together are considered good. But if a PSU is rated just in terms of Peak wattage, then simply avoid that PSU. There is more to it but we have focused on making things simpler to understand. Most power supplies hit their peak efficiency levels with loads in the range of 40 to 80 percent. Building to about 50 to 60 percent of a PSU’s capacity is advisable to achieve maximum efficiency and yet leave room for future expansion. There are various power supply calculators on the internet like Outer Vision and VBUtils which provide approximated wattage requirements based on the data you provide. 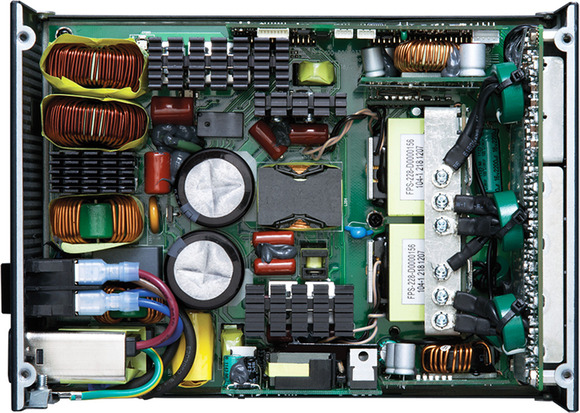 For example, If the maximum TDP (total design power) of your system’s present components is 400 watts according to the calculator, consider a PSU with 40% to 80% more power. A PSU around  650 watts to 700 watts PSU will be sufficient and will provide enough headroom for future upgrades.

How Efficient Should The PSU Be ? 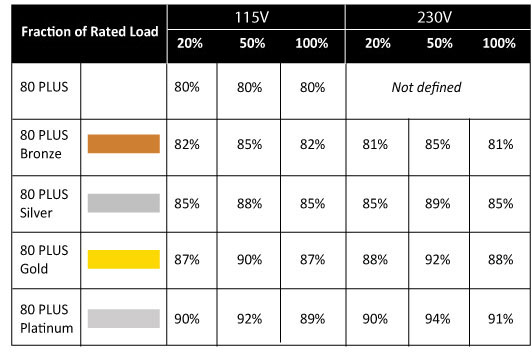 First, let’s talk about what efficiency means and how it’s calculated. A computer power supply takes AC power from the wall and converts it into DC power. During this conversion, some power is lost and is exhausted as heat. If a power supply is more efficient, it requires less AC power to produce the same amount of DC power than a lesser efficient unit and less heat is produced. An “80 Plus” certification guarantees  better components which in turn guarantees better power efficiency. Also, less generation of heat—all of which contribute to less fan noise. A power supply with an efficiency rating of 80 percent provides 80 percent of its rated wattage as a power to your system while losing the other 20 percent as heat. The whole “80 Plus” section is a series of different levels of efficiency consisting of  standard “80 Plus”, Silver, Gold, Platinum, Titanium certifications.

Current delivery is an important topic as it decides how the current is supplied in the first place. Not so long ago, some Nvidia-based graphics cards caused problems with systems that seemed to have perfectly adequate power supplies. The system would randomly shut down or would refuse to start in the first place. It was later found that the problem was not with the GPU but the PSU. The PSU with multiple 12V rails, rather than a single 12V rail design suffered due to this issue. Even if the system booted successfully, stability problems persisted. So be sure to check the rated current on the PCIe power connections if you’re contemplating a multi-rail design.

So what rail design you should choose? Most people have very strong opinions on what rail distribution is best, without understanding what a rail is. The common misconception is that a rail is a part of the power supply that provides power. This is absolutely false. You can have two power supplies that are 99% identical and one be single rail and one be multi. Both single-rail and multi-rail have their advantages and disadvantages.

In a single-rail design, all of the power from the supply will be available to any component connected to the unit, regardless of the connector or cable used. However, a single-rail power supply can supply excess current into respective components and damage it in an event of failure.

In a multi-rail design, the current would climb until it hit that rail’s Overcurrent Protection or OCP point, at which point the PSU would shut down to protect itself and your computer. The OCP mechanisms in a multi-rail power supply monitor each rail and will shut the whole unit down if they detect an overload on any of the rails. The OCP on single-rail units kicks in only at much higher amperages, which could lead to a major meltdown if a serious overload occurs.

So final verdict? Single rail or multi rail? Neither in most of the cases. But if we really want a winner, it will be multi-rail, by a sharp edge. Then again, it does not mean that single-rail is a bad choice. Any of the choices won’t have any impact on your performance or overclocking endeavours. 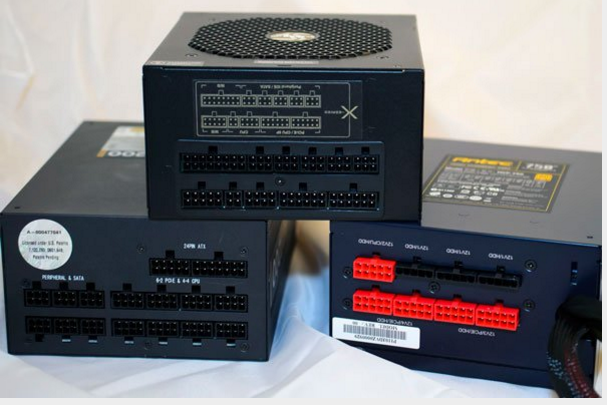 Power Supplies are usually available in hard-wired cabling, with semi-modular cabling or with fully modular cabling. Modular PSUs are the most efficient and useful due to the flexibility it provides. One can add or remove cables according to one’s requirement. This feature is present in semi-modular PSUs but is restricted to a certain level. Non-modular PSUs have hard-wired cabling where one end of the cable is soldered into the PSU’s PCB and the other end terminates in a standard connector, with no breaks in the line.

Technically, a non-modular PSU is better. It is less resistant as compared to semi-modular and modular PSUs in current supply. PSUs with higher resistance tend to be less efficient. But we don’t have a winner here because the resistance is negligible in most of the cases and is hardly a matter of concern. It also depends on what type of case you own and if the size of the PSU is compatible. If your cabinet has a PSU shroud then the selection process becomes easier as it won’t matter what type of PSU you choose. However, if your cabinet doesn’t have a PSU shroud, then it comes to personal preferences. Some can bear with the excess of unused cables lying in the cabinet and some would do anything to have a clean and slick interior of the cabinet.

Do we have a winner? Absolutely not. It all depends on personal preference and choosing either type won’t have any noticeable adverse effects on your overall experience.

This guide was made to make you understand some basic concepts of PSUs. The information provided in this guide barely touched the underlying technology of present generation of PSUs, but the information provided in this article is enough to help you make a decision. Always remember that a PSU is as important as any other component in your build and can decide how long your PC lives in most cases.

If any of the points were not clear enough, our friends at PCWorld have made a PSU Guide based on similar factors, do check it out !