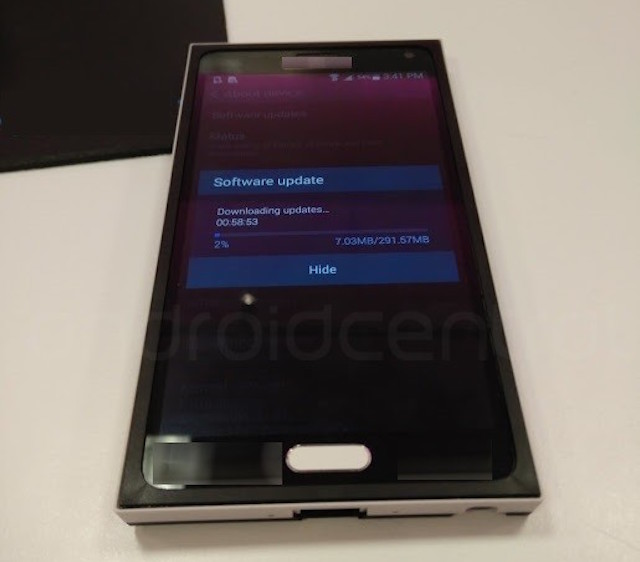 Yet more images of the much-anticipated Samsung Galaxy Note 4 have been leaked ahead of the handset’s official unveiling next week. Despite its funky disguise, we get a feel for its size — plus confirmation of its model number and launch software.

As expected, the Galaxy Note 4 will have Android 4.4.4 KitKat — Google’s latest Android release — pre-installed when it goes on sale. It will be coupled with a new TouchWiz user interface that is expected to offer improved S Pen functionality and other new features.

Those S Pen improvements are thought to be one of the Note 4′s biggest selling points, and it’s what the South Korean company has teased most in its numerous Note 4 teaser videos over the past couple of weeks. They may not be the most exciting thing on its spec sheet, however.

We’re also expecting a much-improved metal form factor — much like the Galaxy Alpha’s — which was first pictured out in the wild earlier this month. We don’t get to see that in the latest images, however, because this handset is disguised in a rather unflattering security case that’s designed to keep its design a secret until its unveiling.

What we can see, thanks to the screenshot below, is that this particular device has the “SM-N910T” model number. It will be one of a number of different Note 4 variants, each of which will have different processors and chips to suit different markets around the world. 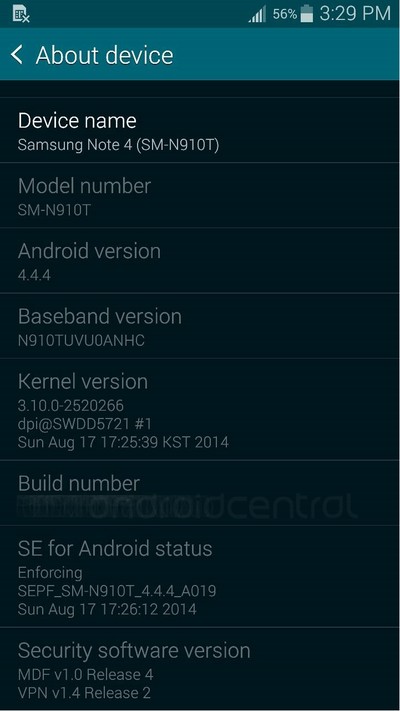 The U.S. model, for instance, will likely have a Qualcomm Snapdragon 805 processor and LTE connectivity, while certain parts of Europe and other countries where LTE is still nonexistent will get a model with Samsung’s own Exynos processor instead.

Other specifications are expected to include a 5.7-inch Quad HD display, 3GB of RAM, 32GB of internal storage, and a fingerprint scanner. Given that the display size remains the same as the Note 3′s, you can expect the new device to be around the same size all over.